Amazon’s role in reshaping the global economy is so complex and contentious, it can cause leaders in the Republican party to call out their own president.

Amazon is doing great damage to tax paying retailers. Towns, cities and states throughout the U.S. are being hurt – many jobs being lost!

Luntz responded noting Amazon’s unrelenting growth from 32,000 to 341,000 employees in five years. He also directed the president to a GeekWire story about Amazon’s intentions to add 100,000 more jobs by 2019.

Unsurprisingly, Luntz’s tweet ignited a broader discussion about the industries struggling under Amazon’s dominance and whether the jobs the company is adding offset the losses.

January and February, the months succeeding the holiday shopping season, saw retail job losses in the tens of thousands, according to U.S. Bureau of Labor Statistics cited by Fortune. In the wake of disappointing holiday sales, retailers like J.C. Penney, Sears, and Macy’s announced sweeping store closures. 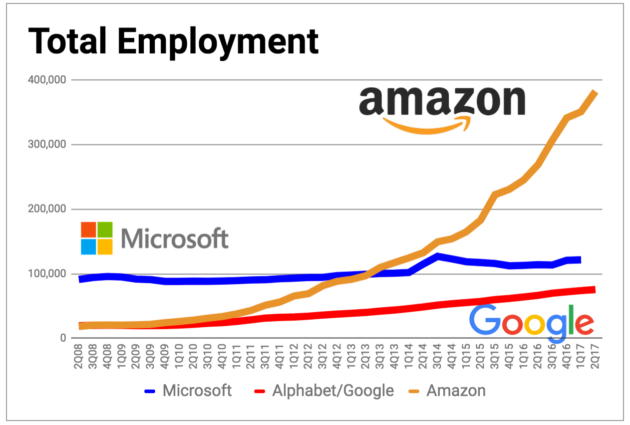 Around the same time, Amazon made its announcement about the 100,000 full-time U.S. jobs it plans to add. That growth would push Amazon’s U.S. workforce to more than 280,000 people. Last month, Amazon announced that it plans to hire another 50,000 fulfillment employees, which are typically blue collar jobs.

Trump’s Wednesday tweet wasn’t the first time he’s taken aim at Amazon. The Seattle e-commerce giant has become something of a piñata for the president. Amazon CEO Jeff Bezos is also the owner of The Washington Post, which has been doubling down on investigative reporting into the Trump administration.

See a full timeline of Trump’s attacks on Amazon and Bezos here.