T-Mobile talks a big game as it seeks to stand out as competition for what it calls the “duopoly” of AT&T and Verizon. This week, the self-proclaimed Un-Carrier put its money where its mouth is.

T-Mobile dropped $7.99 billion in a Federal Communications Commission auction for low-band wireless spectrum licenses previously owned by broadcast networks. T-Mobile said it acquired 45 percent of all available low-band spectrum in the auction, enough to cover all of the U.S.

“These auction results are a win for everyone, especially consumers, and generated BILLIONS for broadcasters and US taxpayers. Congratulations to the FCC!” John Legere, president and CEO of T-Mobile of said in a statement. “This spectrum sets us up to bring the Un-carrier – and REAL competition – to wireless customers everywhere, many of whom have never had real choices in wireless. If the Duopoly thought things were rough before – well, just wait!”

The new spectrum represents T-Mobile’s biggest investment in its history. It will help the Bellevue, Wash. wireless company build out its LTE data network across the country.

Legere discussed the importance of the new spectrum following the auction in a video:

Here is a look at T-Mobile’s coverage map at the end of 2017, and a map showing where it picked up the most spectrum: 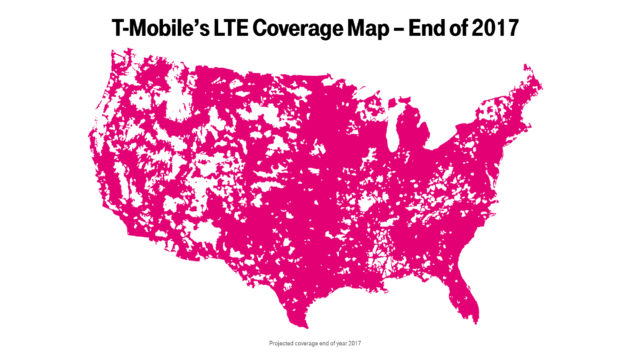 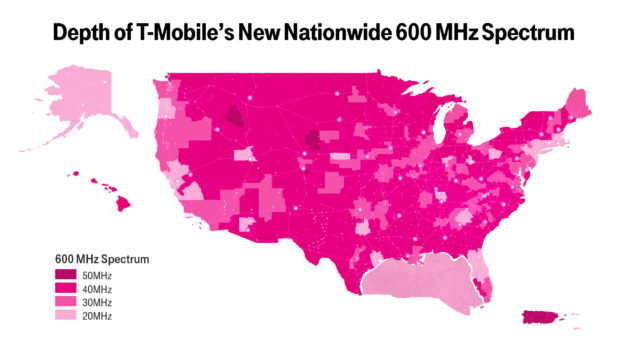 T-Mobile has always been strong in cities. But the low-band spectrum, which T-Mobile says covers longer distances than other spectrum types, will shore up signal strength within buildings and in rural areas.

T-Mobile said it will put some of that increased spectrum to work this year for its customers and MetroPCS customers in various parts of the country.

Other wireless carriers did not buy nearly as much spectrum as T-Mobile this year. AT&T dropped $910 million for spectrum in 18 areas, while Verizon and Sprint did not acquire any new spectrum.

This year’s auction presents a stark difference from a 2015 auction that AT&T and Verizon dominated. Legere later called out the two carriers for their actions during spectrum auctions.