When marketing expert Tim Fry and history teacher Anthony Rovente teamed up last summer to create a Washington state history app, with the help of students from tiny Lopez Island, Wash., they never imagined how far their tech platform would go.

Several months later, Fry and Rovente have a new partner in Tom Neville, who teaches social studies thousands of miles away at the American School of Paris. And there’s a new app being built, called the The Monuments Project, which will unite students from Lopez Island Middle School and ASP to tell the untold stories of American World War I service members buried at Suresnes American Cemetery outside of Paris.

The effort coincides with Tuesday’s 100th anniversary of the United States’ entry into WWI, and The Monuments Project will work to uncover information surrounding 29 Washington state natives who are buried at Suresnes.

The team is partnering with several organizations, including the American Battle Monuments Commission — which maintains cemeteries outside of the United States that hold remains of American service members — as well as local archives in France, the Washington State Office of the Secretary of State, and the Washington State Historical Society.

Fry, who is the owner of 468 Communications, a firm specializing in communications services and location-based marketing, originally set out to design an app platform primarily for destination communities and chambers of commerce. The ProjectWA idea introduced education into the mix, and led Fry to recently create 468 Field Trip as a product aimed at teachers and school districts. The Monuments Project plays off that education goal, and its transatlantic application is an exciting prospect for all involved.

We knew that we could use technology to get students more interested in the subject matter of history.

“Although we couldn’t have predicted this exact scenario, this is really what we wanted to see happen,” Fry said of his work with Rovente on ProjectWA. “We knew that we could use technology to get students more interested in the subject matter of history — at least that was our original question — and by the time we launched the Washington State Insider App, I think we proved that that was true. We knew that we had hit on something — that we could meet the students where they’re at, on their mobile devices, to grab their attention and then get them interested in the history that could be told through those devices.”

The interest from teachers and students around the state solidified that belief, and then Neville reached out with his idea.

“What’s great is that the students on Lopez can continue what they started and it’s still telling the story of Washington state history — and it’s enabling them to get to work with students they would never get to work with,” Fry said.

Neville, who is originally from Delaware County, Penn., is in his seventh year of teaching and third at ASP. He co-directs THATClass, an educational nonprofit based in Washington, D.C., that helps students and teachers use local archives and digital tools to actively participate in public history.

Neville made contact with Fry and Rovente after reading GeekWire’s coverage on the History Relevance website. The group has been meeting about once a week for the past 2 and a half months.

“Approaching this project, WWI held less interest for me than WWII, in which my grandfather served,” Neville said. “However, in my research and teaching experience, content focus matters little if the historical work is real. Just about any topic, if engaged with directly through its primary artifacts, will offer stories worth exploring and sharing.”

And that’s a sentiment that seems to have been shared immediately by his students, who got a chance to visit the Suresnes cemetery last week. He said many student reflections highlighted a special appreciation for the importance of telling stories about neglected people.

“The reaction so far is just what we angle for in setting up real partnerships built on authentic challenges,” Neville said. “It yields heightened attention from the learners, a visible recognition that the work matters, a sense of ownership in getting that work done, and a desire to shape the process and product in significant ways.”

While The Monuments Project app and website will ultimately hold the stories that are uncovered by students on both sides of the Atlantic, the site already gives users some rich information about the project, those involved and their goals.

Students from seventh- and 11th-grade history classes at Lopez are paired, in most instances, with students from three different eighth grade social studies classes in Paris, and those groups are each given a single Washington service member to research.

“From a learning perspective, a successful result will be in process, not product,” Neville said. “The pedagogical underpinnings of this project hold that the final product doesn’t determine the success or failure of the learning for our students. A successful learning result will be that our students come away with a reliable foundation of research, analysis, and project management skills, a sense for how narratives are constructed through selection and omission, and the heightened empathy and humility that can come with examining, in great depth and with full attention, the life of another, regardless of their time, place, and circumstances.”

Beyond Washington state service members, Fry thinks there is great potential for students and educators in other states to use The Monuments Project to tell similar stories.

“It’d be really easy for any student, any teacher, any school that wanted to get involved to start their own research and use the platforms we’re creating to tell untold stories of their own WWI service members. We can envision this growing pretty significantly.”

It remains to be seen whether Fry will fuel that growth with his unique brand of evangelizing. Last summer, he and his wife and two kids loaded up an RV and crisscrossed Washington state promoting ProjectWA — check them out on Instagram. Since then, the family has moved off Lopez to Bellingham, Wash., so that Fry can continue to travel and promote projects more easily without having to cope with ferry schedules.

So could there be a family RV trip to WWI cemeteries in Europe this summer?

“I gotta tell ya, the thought has absolutely crossed our mind,” Fry said with a laugh. “In fact, discussions are ongoing with my wife, when we could make that trip — and whether it’s in a Monuments Project Winnebago or maybe something smaller. I don’t know.”

For now, the students at Lopez are inspired by once again getting the chance to use tech to shed light on Washington history, while also telling WWI stories in a new way and meeting and interacting with students from a far-off place. 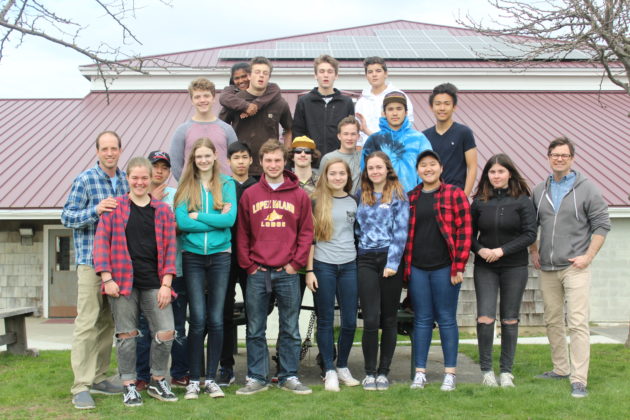 “This project means a lot to me, because it seems a great opportunity for students from different countries to work together and actually create something big,” said Anne, a Lopez Island Middle School student, in an email from Rovente in which he shared student reactions. “It helps us to learn about WWI outside of the traditional classroom discussion.”

This project means a lot to me, because it seems a great opportunity for students from different countries to work together and actually create something big.

“By collaborating with a school of other cultures and languages we can learn about them while creating something to benefit us all at the same time,” said Sara, another Lopez student. “I am also really excited to work with new people and possibly make some new friends.”

Neville said that while his students have researched people before, the subjects were famous, easy to find people. “This will be more of a challenge,” he quoted a student as saying.

But it will be a worthy one, Neville said, adding that another student said, “These weren’t just names inscribed in marble, they were stories waiting to be uncovered and told. I was given the power to tell that story.”