Bay Area universities top Pitchbook’s new annual report on the schools producing the most venture capital-backed entrepreneurs. Seattle’s University of Washington, which has topped other rankings, is number 23 on this one, reflecting a key difference between the two tech hubs.

Pitchbook, a Seattle-based investment site and database, looked at where startup founders went to school between 2006-2016, ranking the top universities and graduate programs in order of the total number of venture capital-backed entrepreneurs they have produced. In that time period, Stanford produced 1,127 founders, earning it the top spot on the list, followed by the University of California, Berkeley.

That should come as no shock, as two highly-ranked schools in the heart of the Bay Area tech scene. But the University of Washington, a highly-regarded research school at the center of the Seattle-area tech community, is 23rd on the list.

In June, career website Paysa released a report on the most influential universities in tech and the University of Washington was No. 1.

Why the discrepancy between the two reports? It’s all about what students do after they graduate. The Paysa report analyzed data from more than 250,000 resumes of employees at the country’s 100 biggest tech companies in the U.S., the UW had the highest number of employees at major tech companies and was the number one alma mater at Microsoft, Amazon, and Expedia. 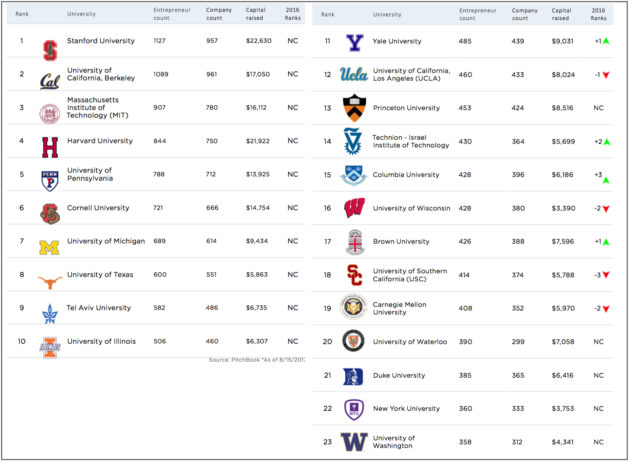 The studies demonstrate that, while big companies fuel a strong tech industry in Seattle, its startup scene is still far less robust than Silicon Valley’s. While Bay Area schools are churning out high numbers of entrepreneurs, UW’s tech talent seems to gravitate toward gigs at big tech companies. The gap between the two startup scenes is also reflected in the amount of venture capital cash flowing in each.

“Stanford had roughly 7,000 undergraduates enrolled during the 2016-2017 year,” the Pitchbook study says. “Compare that to, say, the University of Washington which had a total undergraduate enrollment of more than 31,400 at its Seattle campus alone last year, and it seems a small figure. Yet since 2006, Stanford has produced more than 3x the number of founders than its athletic conference rival.”

The most heavily-funded companies founded by Stanford grads are Snap, Solyndra, Guardant Health, Opendoor, and Sunrun, according to the report. Cal grads launched Cloudier, Zynga, and Auris Surgical Robots, among others. 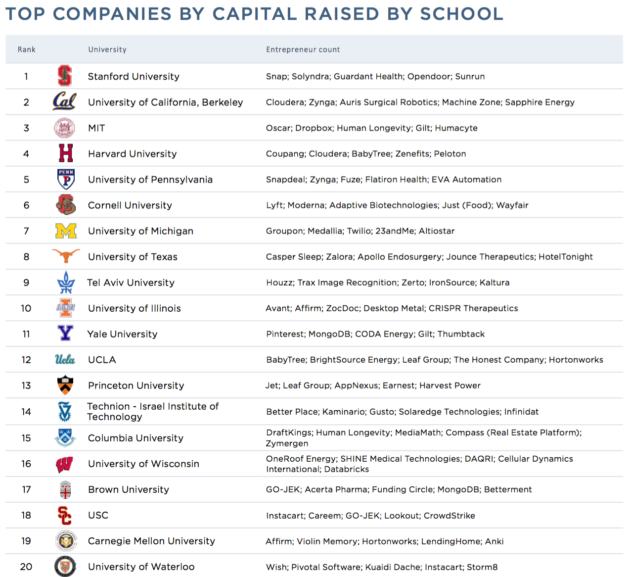 Harvard edges out Stanford in MBA programs to graduate the most VC-based entrepreneurs. After Stanford, the University of Pennsylvania, INSEAD, and Northwestern are the top business schools.

There’s another factor at play here that boosts entrepreneurial activity, beyond proximity to tech hubs and quality of the school, as Pitchbook explains:

There is also another significant characteristic that many of 20 the universities in this ranking have in common: investment funds, or affiliations with local VCs. Stanford deploys capital through its StartX fund, helping founders receive not only capital to launch their business, but mentoring and support from its network of investors and professionals. Other university-backed vehicles include UCLA VC Fund (UCLA), NYU Innovation Venture Fund (NYU) and Triton Technology Fund (UCSD). All of these funds may not solely invest in student or alumni-founded startups, but the access to capital and mentoring in such close proximity undoubtedly has an effect on the number of students that pursue their ambitions to start a company of their own.

The UW is also making concerted efforts to generate more startup activity in its community. The most notable example is CoMotion Labs @ Startup Hall, a hub for entrepreneurs and innovators the UW created in partnership with Techstars and Founders Co-Op. But until more graduates start choosing entrepreneurship over jobs at Amazon and Microsoft, UW isn’t likely to climb the ranks of Pitchbook’s list.