The ceiling height of an office can influence whether a team is better at figuring out big picture problems or hashing out complex details. Your focus, stress and energy levels are affected by the presence of green and blue in the office.

These are just a few of the ways that designers are taking into account how the human brain works when designing buildings. NBBJ, which designed Amazon’s new downtown campus and is doing another Seattle campus project called S, has been working with Dr. John Medina, a developmental molecular biologist and professor at the University of Washington. Together, they have delved into the work of numerous neuroscientists to learn how the human brain interacts with the environments people experience all the time, specifically their offices.

Medina, who spoke at CoreNet Global event in Seattle Wednesday still counts himself as a skeptic of  the effects of neuroscience and design because we still know very little about the human brain.

“Our understanding of how (the brain) works is childlike, particularly in relationship to the kinds of questions we are asking about designing buildings,” Medina said.

But there are some themes that emerge when looking at the work of prominent neuroscientists, and lessons that designers can take from them.

For the majority of our existence, humanity has existed outside. So it’s a bit unnatural for us to spend large chunks of our days cooped up inside an office building. To counteract that, designers have done their best to mimic the outdoor environment, with plenty of open space, access to natural light, greenery within the building and fresh air.

But all you open office fans hold on for a second. Medina cites Harvard’s Edward O. Wilson, who posited that humans have a constant attraction to open space. But as soon as things get difficult, whether it’s a foreboding creature in the wild, or a conference call that is way too loud, people look to retreat and collect themselves. Anyone building out a big open office better make sure to have some quiet places where people can focus.

The bit about ceilings goes back to a concept created by Joan Meyers-Levy of the University of Minnesota called the Cathedral Effect. It states that the height of the ceiling has a bearing on the types of problems people and teams can solve.

“Subjects focus on the gist aspects of information, have the least attention to details and solve gist problems best when the ceiling is soaring,” Medina said. “And they suck at the details. If you want to get them to do the details, lower the ceiling.”

No one knows why this Cathedral Effect exists, Medina said, just that it does.

Colors also affect your mood. The color blue is known to send the message to parts of the brain to be alert, according to research from Mariana Figueiro of Rensselaer Polytechnic Institute in New York cited by Medina. Blue suppresses melatonin, the chemical that helps us fall asleep. And why is that?

“In our evolutionary history, the only time we ever saw blue was when we saw the sky, and the only time you can see sky is in the daytime … So your brain thinks it’s the freakin’ day time.”

Green correlates to plants, and we are attracted those, Medina said, because they are nourished by water. It goes to our survival instincts. When we see green, we are more focused and at ease. 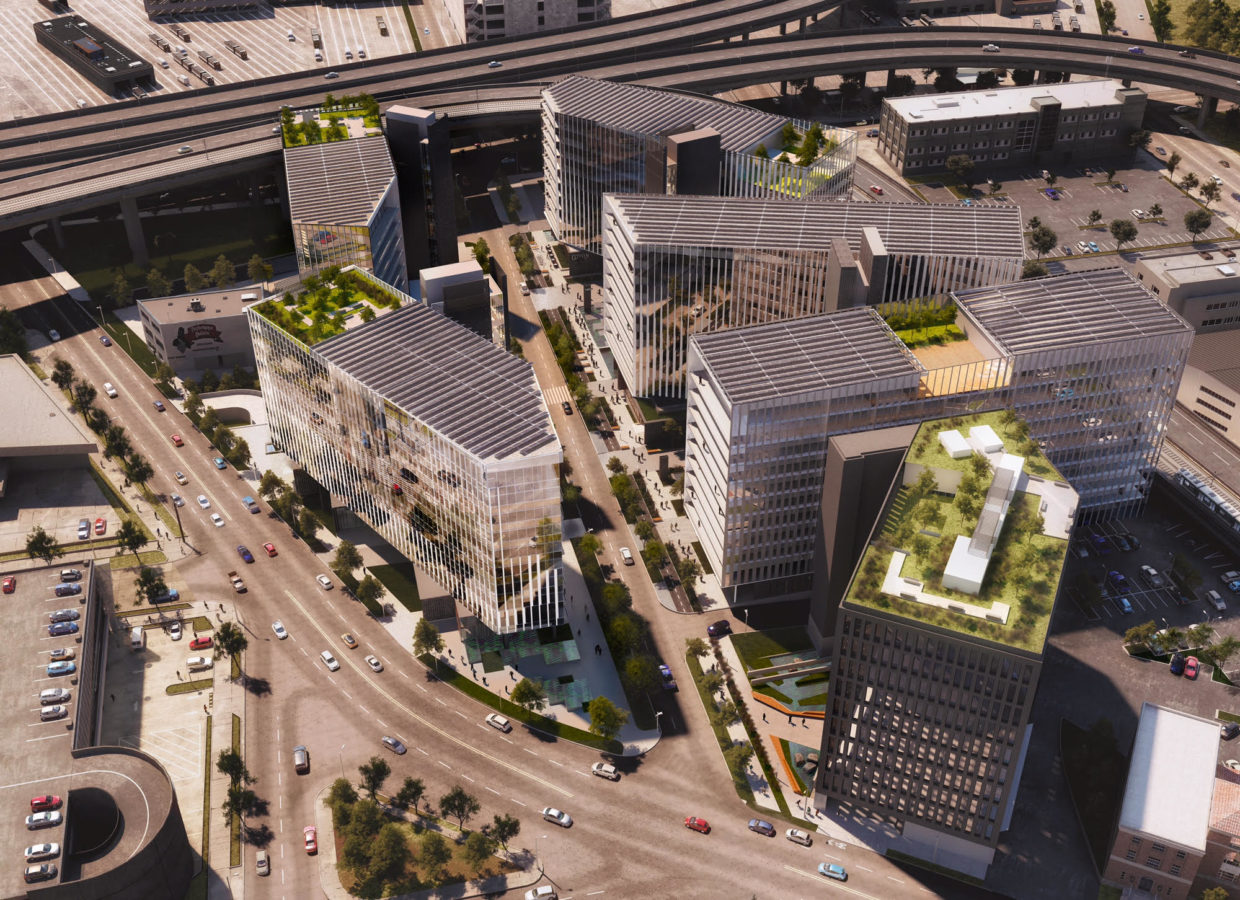 The team designing the S campus seeks to create different experiences throughout the area. 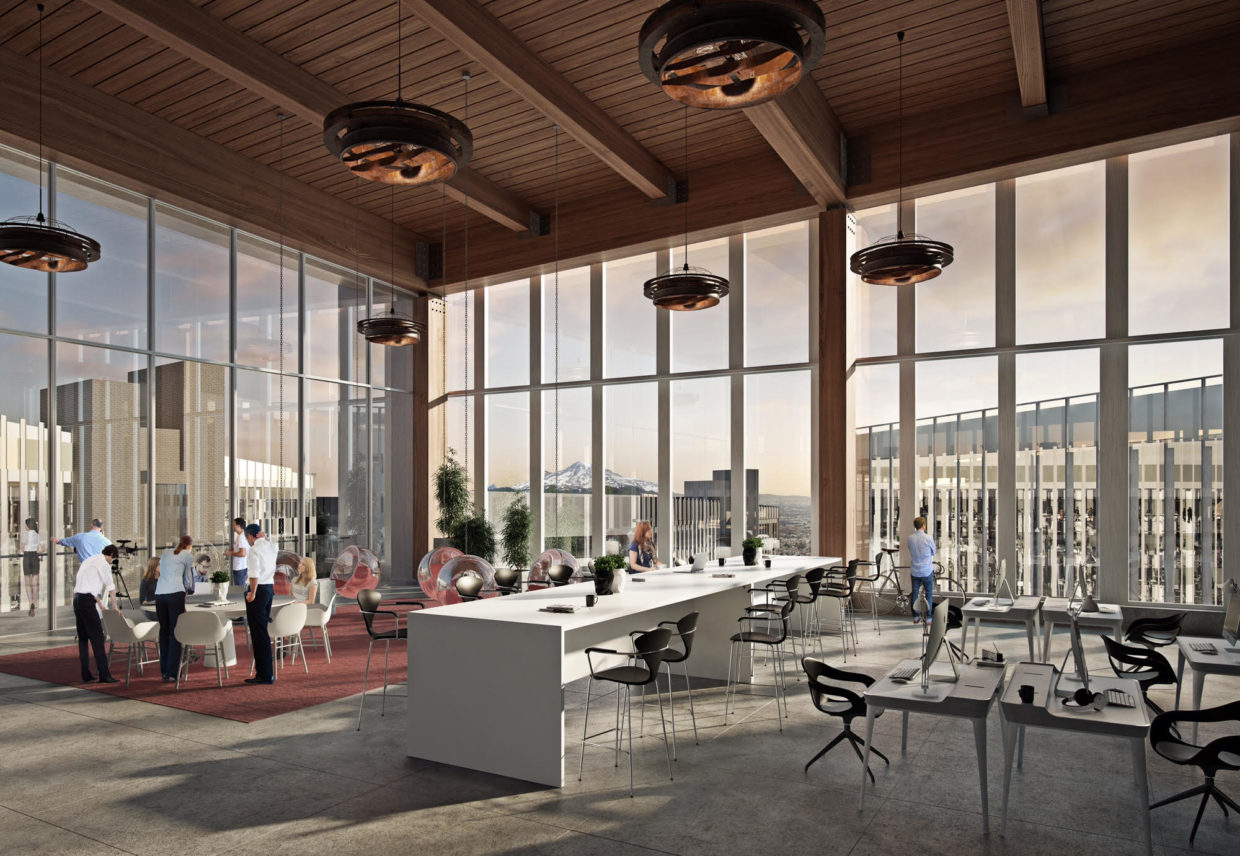 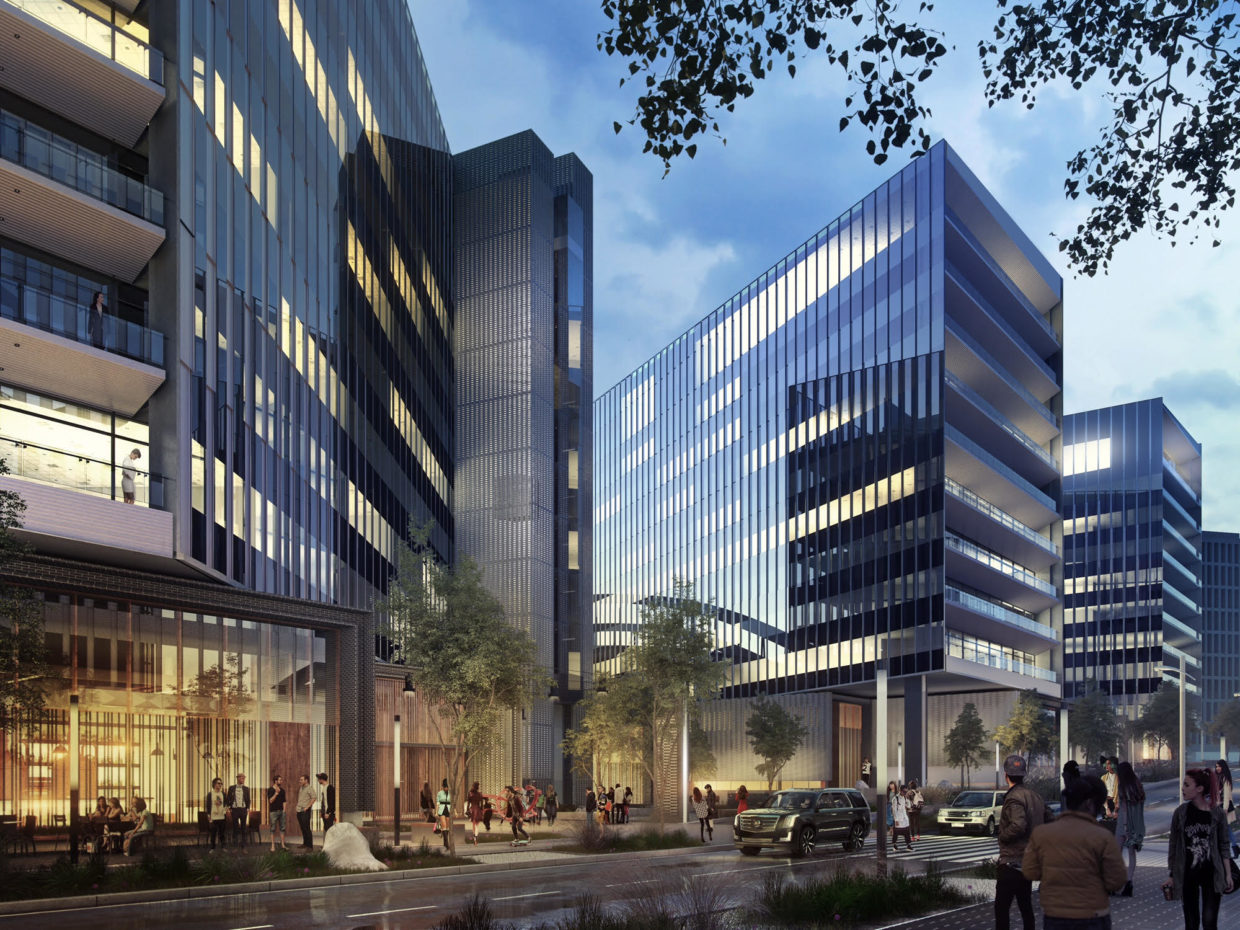 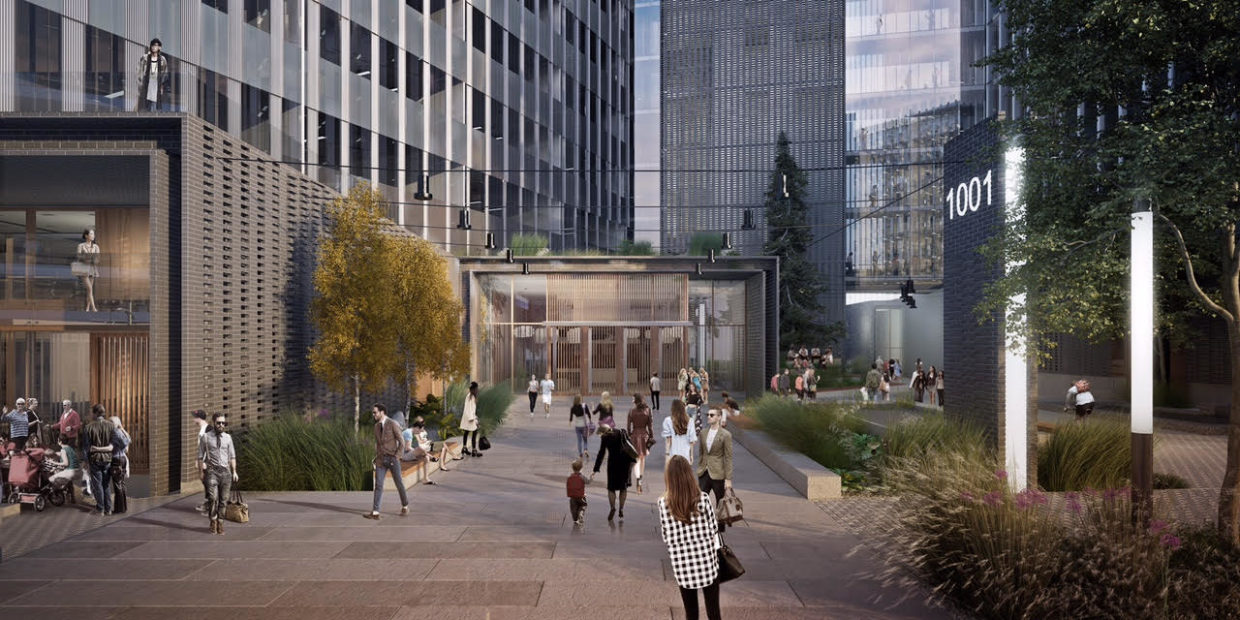 The buildings are meant to be approachable from the ground level. 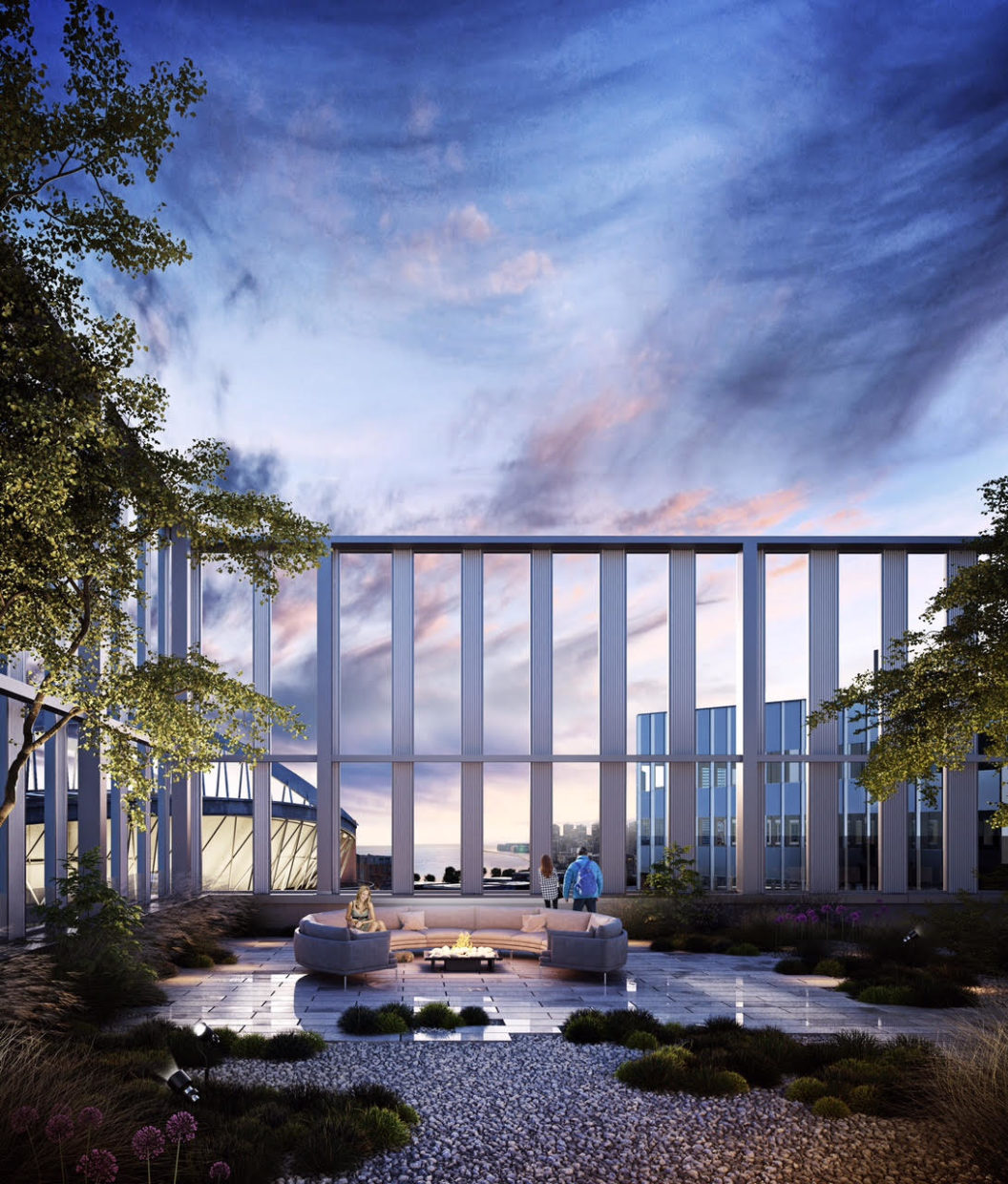 The rooftop decks provide refuge from the bustling action below

So how do these concepts translate to office buildings? NBBJ is designing the big S campus for Seattle developer Greg Smith’s Urban Visions. The project is near CenturyLink and Safeco fields and includes six buildings totaling 1.2 million square feet. It is in the permitting process and has just begun looking for tenants.

Smith said the project was designed with a priority of people first, building second. That means the team is trying to build a campus that is healthy and inviting to workers and visitors alike. When it comes to development, the priority has always been building first, people second.

“I think we have just accepted what our spaces do for us,” Smith said. “We need to demand that our spaces make us happier, more creative and healthier.”

The spacing of teams is important and something the S team has been paying attention to. Ryan Mullenix, a partner at NBBJ, said the limit people typically want to walk to go to someone else’s desk. Sixty-five feet is email range, and if someone is 100 feet away, he or she might as well be in an entirely different building.

In addition to knowing how the brain reacts to various elements of a building, designers also want to stimulate people’s brains to get them thinking creatively. One way to do that is variety. By making no two common spaces, landscaped areas or offices alike, the mind is awakened by new experiences.

“We want to create a bunch of different moments that are unlike any other moment in the project,” Mullenix said.

But the best way to keep workers engaged, creative and open to new ideas, according to Medina? Make them learn a brand new language. How’s that for team building?