When KEXP moved into a new home at Seattle Center last year, the popular independent radio station established a physical foundation to support its mission for years to come. In the time since, KEXP has been working to shore up the digital underpinnings that provide the reach and enrichment necessary to serve listeners around the world.

The latest effort in that technical undertaking is the much-needed refreshing of the station’s iOS app, which went live today. It brings with it a new look, faster response time and, perhaps most importantly, the return of the streaming archive — a feature that online listeners have been begging for since outdated technology led to its demise in the old app.

Jay Kardong, a software developer who has been at KEXP for almost five years, said the old app was built around 2009 or 2010 by a company out of Portland.

“It’s ancient. It’s absolutely ancient,” Kardong said. “And a lot of the technology that that one was built on was running off of services that either we didn’t have control over or were being retired or were antiquated. So a lot of it, like the streaming archive, doesn’t work on it because the technology changed underneath us. In January we did a kind of patching as best we could to get it up and running so at least we could do the live streaming, but the streaming archive was left out because it couldn’t work anymore.”

But the station knew it couldn’t ride that solution for long. The ability to listen to any show at any time is a huge draw for listeners who aren’t tied to their radios in Seattle.

“They put a lot of value in the streaming archive,” Kardong said. “A lot of people, especially in Europe, who can’t listen during regular broadcast times want to be able to stream and listen to it. And the website was also affected by the same technology failure. So we were kind of down on a lot of fronts.”

The streaming archive, which lets users listen to KEXP shows and music for up to two weeks after broadcast, was dynamited and rebuilt from the ground up on completely new technology.

“It’s much more stable, it’s much quicker, it’s secure,” Kardong said. “A lot of the infrastructure that the old website is running off of, we’ve removed a lot of the weird dependencies that that’s had.”

Like the old app, the new one launches on the “listen live” screen. But the redesign is immediately apparent and the pillars of the app are visible in the menu — donate, streaming archive, listen live, real time playlist, favorites. The functionality is now gesture-based, and users can swipe up or down to gain access to assorted features. 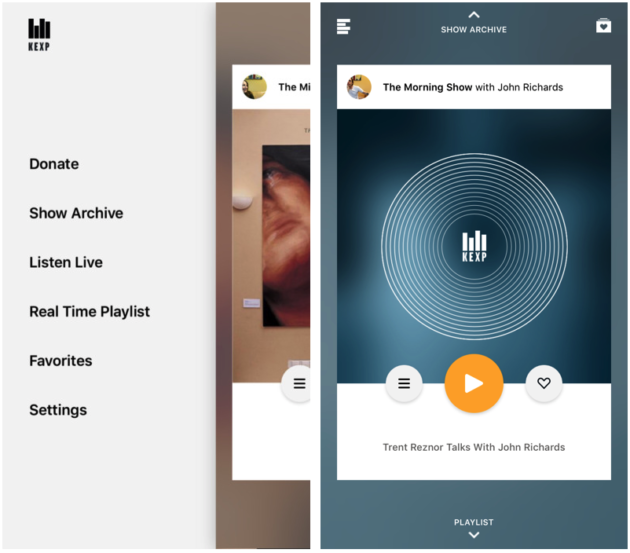 “The idea is to be able to quickly navigate through the app and get to the features that you’re used to,” Kardong said. Users can access the streaming archive in a number of ways including by date, show, host and now genre — such as heavy metal or hip-hop — which wasn’t previously available.

Gone are the days of buffering, too. The app, running off all new infrastructure and technologies such as FFMPEG, Swagger, NGINX, and Virtual Machines, is much quicker now and down the road KEXP may even bring in video, tapping the audience that has led to more than 1 million subscribers on its YouTube channel.

KEXP’s Android app was updated in April and the streaming archive is coming back there soon, too. Here’s a list of some of the notable aspects of the iOS update.

Lending an ear, and a hand

The station is used to hearing from listeners with ideas for how to improve the experience. Some of those folks even step forward to offer their services. Last year, KEXP had more than 600 volunteers lending a hand in various aspects of station operation. While a small number of those are put to work on technical projects, the new app update was very much powered by volunteers.

The design of the app was generated by the Seattle agency BLAMO, and the functionality was the work of two guys hanging out in the station’s Gathering Space.

“I kind of equate it like, I’m the bus driver who took the winning Super Bowl team to the Super Bowl,” Kardong said. “We had a design firm that came and said, ‘How can we help you guys?’ and they donated some valuable time of theirs to come up with this wonderful design. The two software developers that worked in here on weekends and things … it’s pretty neat.”

Tuan Vu, a freelance designer and builder of iOS apps, and Kori Kolodziejczak, an independent IT contractor, are those developers. Both put in about 15 hours per week for roughly 4 1/2 months.

“I use the KEXP Gathering Space to work, connect, get inspired and discover new music,” Vu said. “The space and KEXP have been a big part of my time in Seattle so I just wanted to give back. I originally signed up for flyer-posting duty but was asked to help with the app — which was a dream!”

Kolodziejczak said he got into mobile app development in 2014. He met Vu during an iOS developer accelerator course at Code Fellows and happened to be working remotely at the station when Vu was talking to Kardong about the new app project.

“Developing the new iOS app was not only a great way to give back to the station, but it was also an opportunity to collaborate with the dev staff at KEXP and the designers at BLAMO,” Kolodziejczak said. “As an independent contractor I don’t always get these opportunities, so it was a no brainer on my part.”

Chris Busiel started in the newly created position of digital director at KEXP at the beginning of July. The impetus for his role is part of an overall strategy at the station, in which digital improvements (the app and soon the website) and content generation are an important area of growth.

With more than 15 years working in streaming music and subscription services, most recently at Rhapsody, Busiel is focused on extending reach and extending enrichment. He talks of more personalization around listening, using data generated by users favorites lists and other signals to give those listeners an enhanced experience.

“Digital is that opportunity for listeners to go as deep as they want,” Busiel said. “Through interconnecting all of that content, they hear something great on air, through the live broadcast or the archive. What can we do to get them from that moment of discovery to all of the other great content that we’ve got? We might have another in-studio performance by that artist or reviews that the KEXP DJs and curators have written over the years.”

And that listener might just be a fan on the other side of the world listening online, or 20 feet away in the Gathering Space, ready to offer an opinion or lend some time to keep making KEXP the best it can be.

“It’s super inspiring though to have people that are that involved in what we’re doing to share that kind of stuff with us, to say, ‘Fix this’ or ‘Here’s an idea to do that,'” Kardong said.