If you aren’t into player vs. player or battle arena games, you may not be familiar with Carbon Games. It was founded in July of 2011 after the dissolution of Titan Studios, the Seattle-based developer behind 2009’s PlayStation 3 exclusive, Fat Princess.

Since its founding, Bellevue, Wash.-based Carbon has primarily worked on the AirMech franchise, a sort of spiritual sequel to the cult classic Genesis game Herzog Zwei, where players fight one another with giant transforming robots in the best anime tradition.

AirMech eventually got ported to consoles as AirMech Arena, and the universe was expanded again earlier this year with the VR title AirMech: Command.

Back in May, Carbon Games put out word as to the future of the AirMech franchise, after a lengthy period of silence. This included the announcement of AirMech: Wastelands, which was unexpectedly green-lit on Steam Early Access last week. If you’re a VIP in AirMech: Strike, you should already have access to Wastelands via a Steam key, or you can just pay $20. 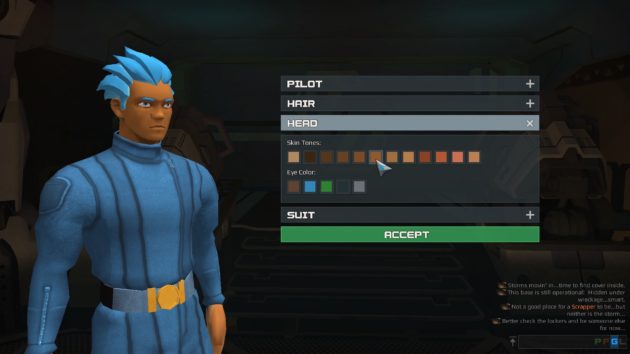 Wastelands is described as “an RPG reboot of everything AirMech,” and has been developed as a sort of sister project to AirMech: Strike. AirMech’s PVP focus has been replaced with single- and multiplayer missions against the Iron Hand, an army of robots that is fighting for dominance against what’s left of humanity. Your character gets sucked into the whole thing by accident, when you stumble into an army base while scavenging for scrap metal in the wasteland. To avoid trouble, you steal a pilot’s clothes, and (un)fortunately, that works almost too well; the next thing you know, you’re piloting an airmech on the front lines of the war effort. 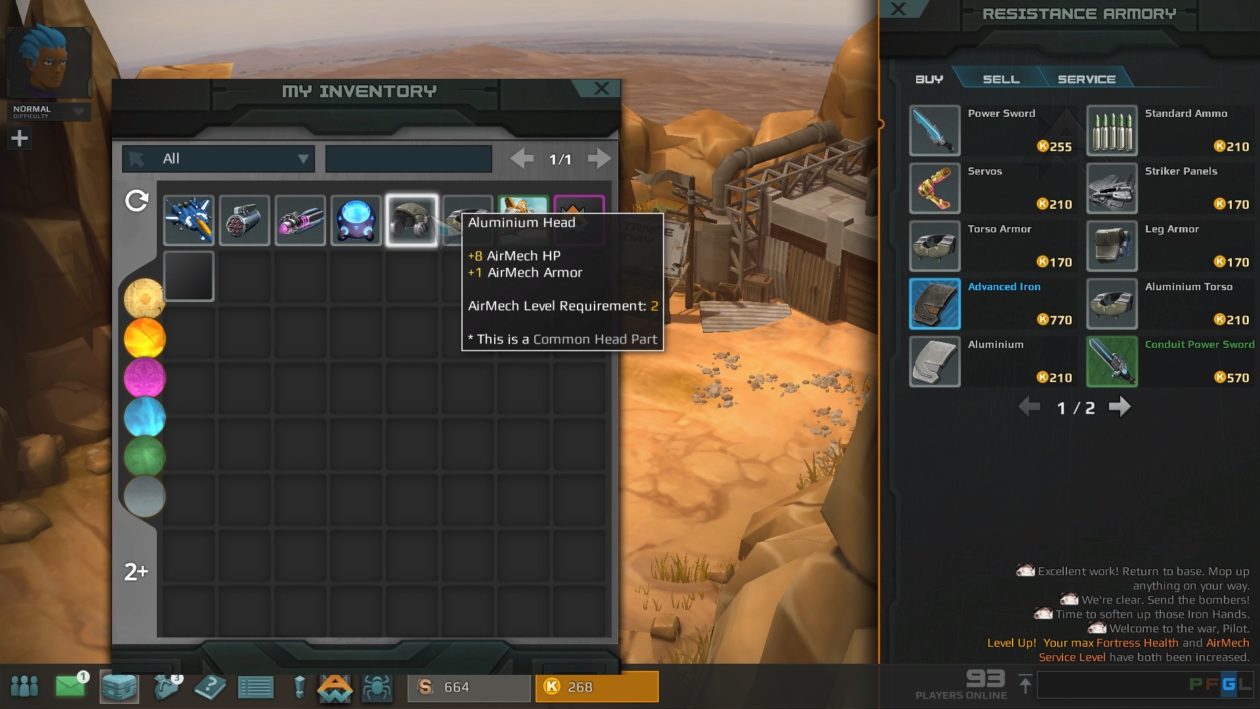 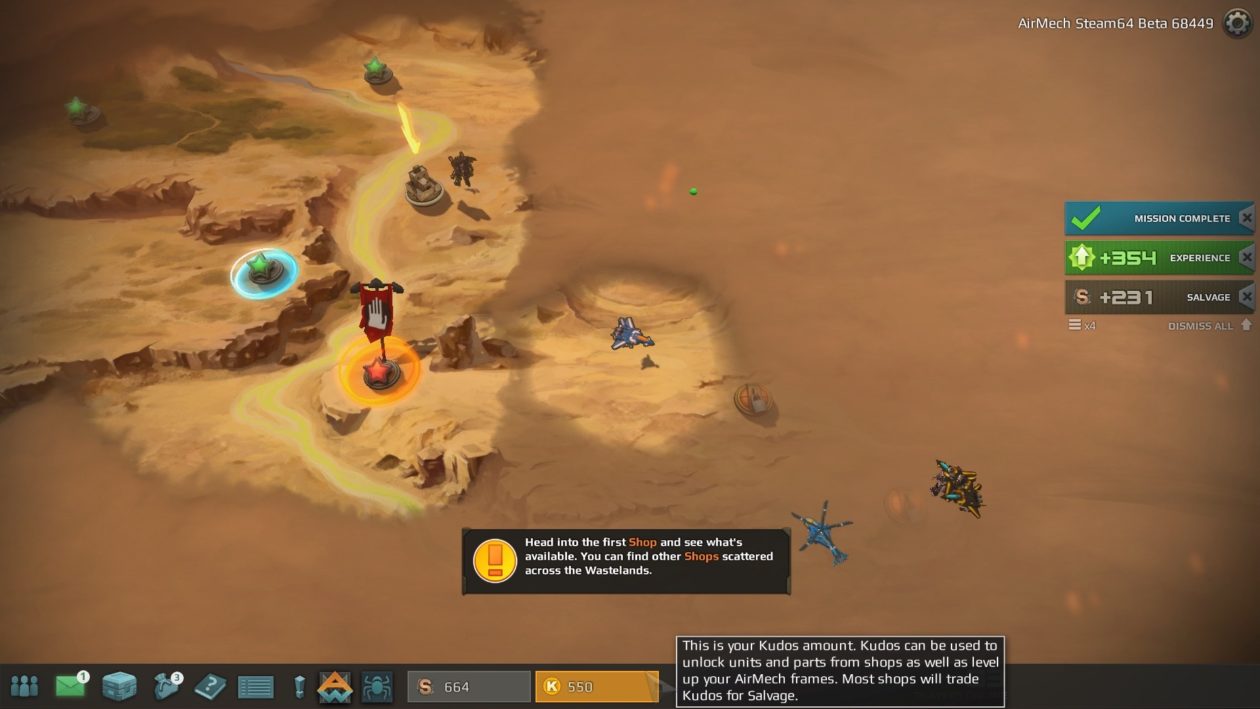 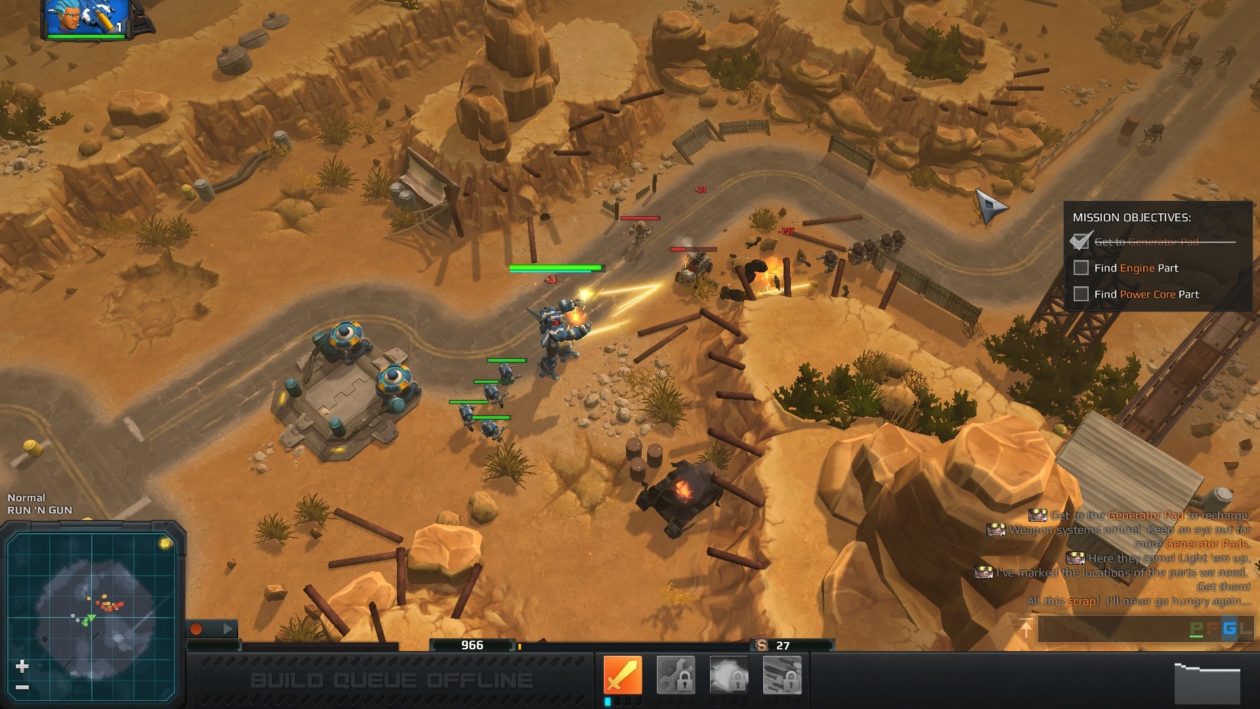 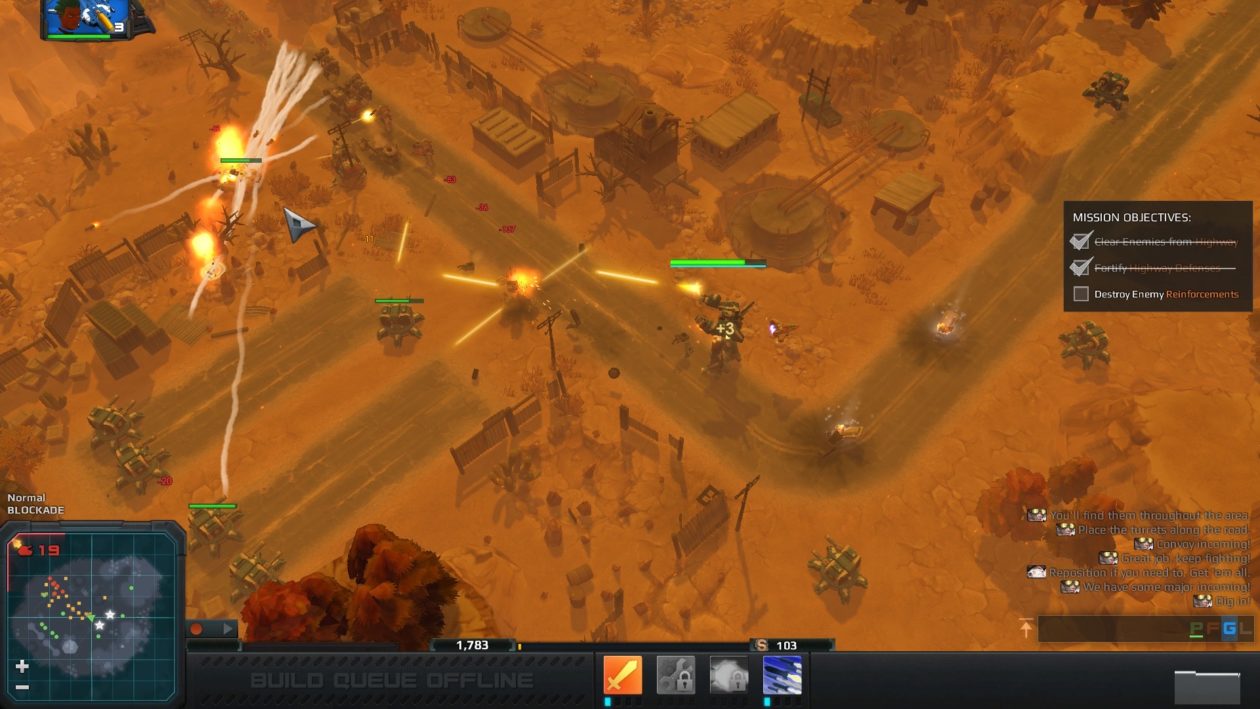 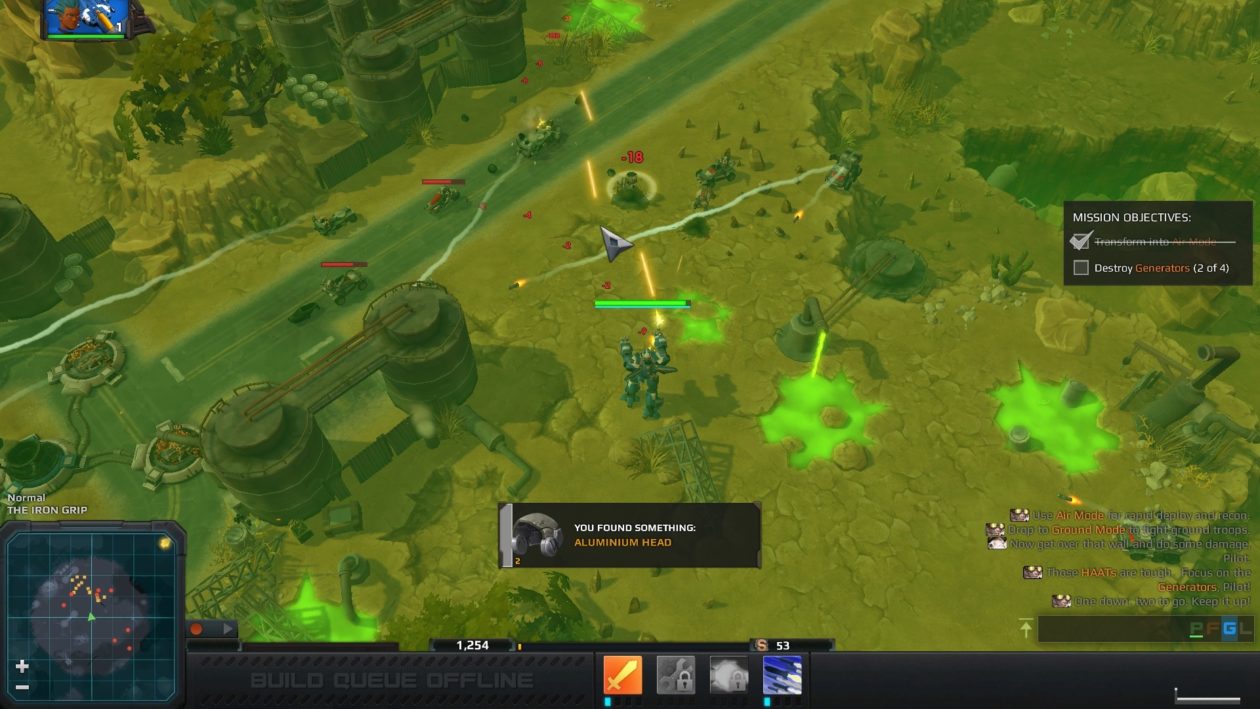 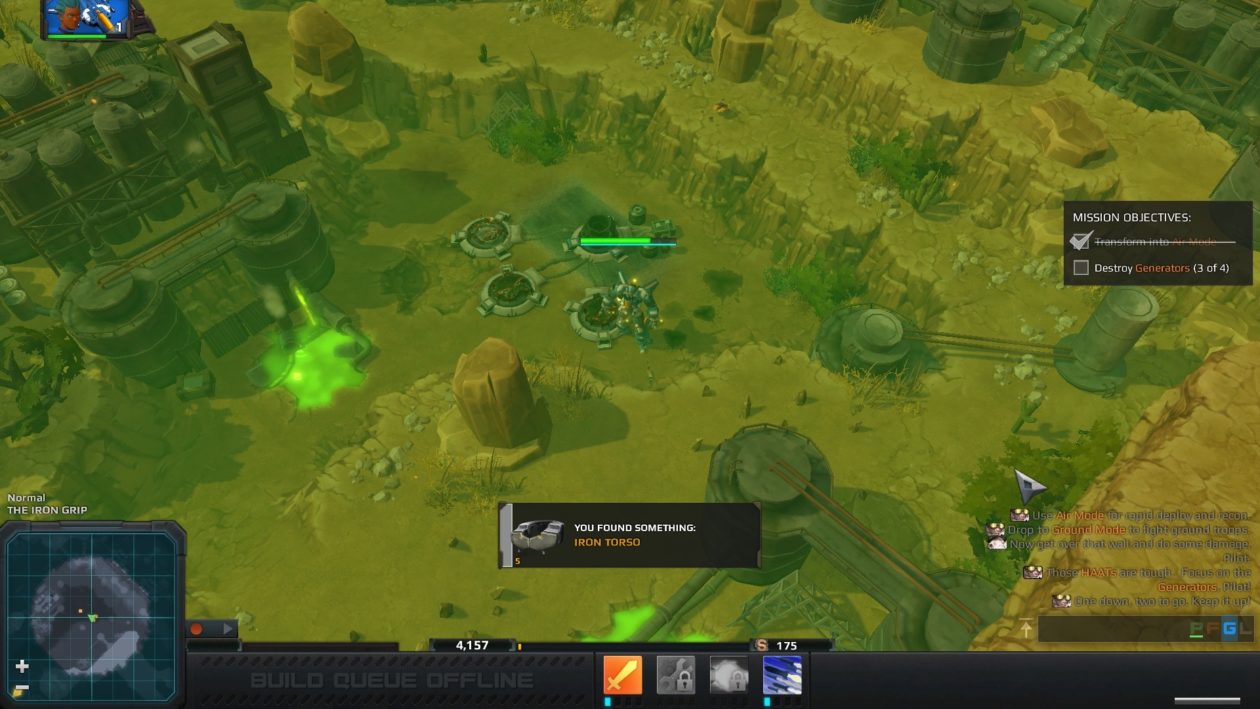 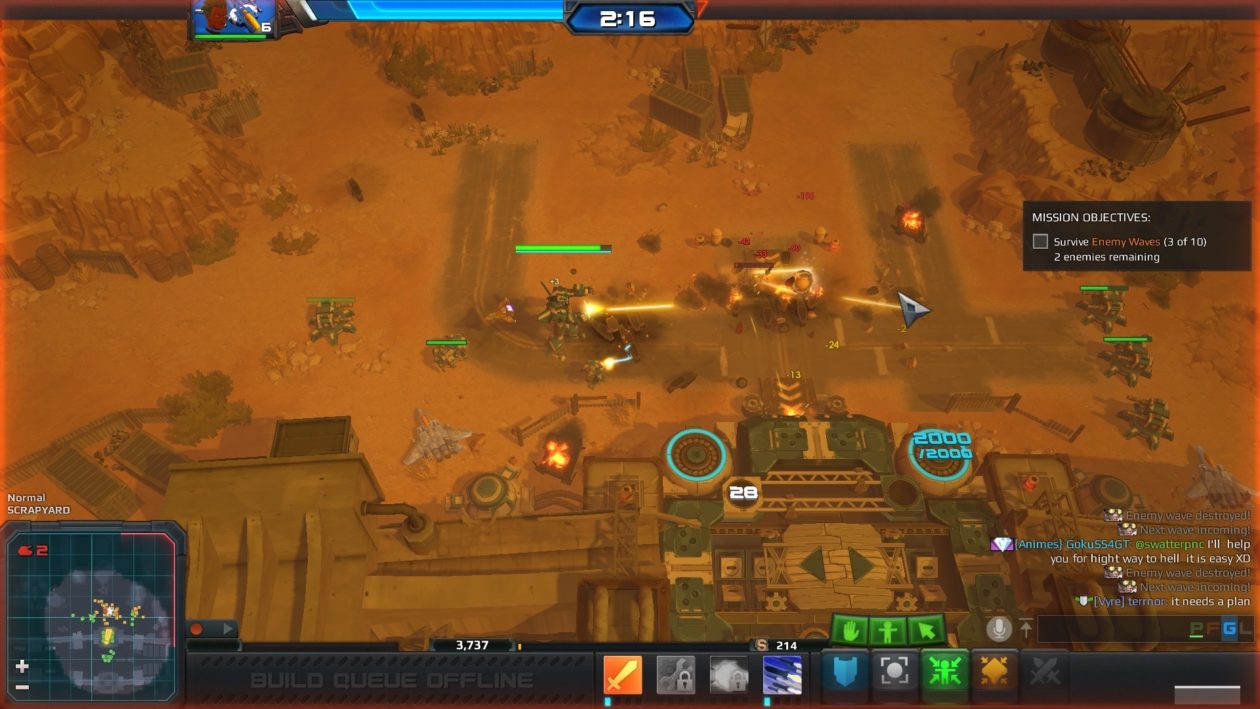 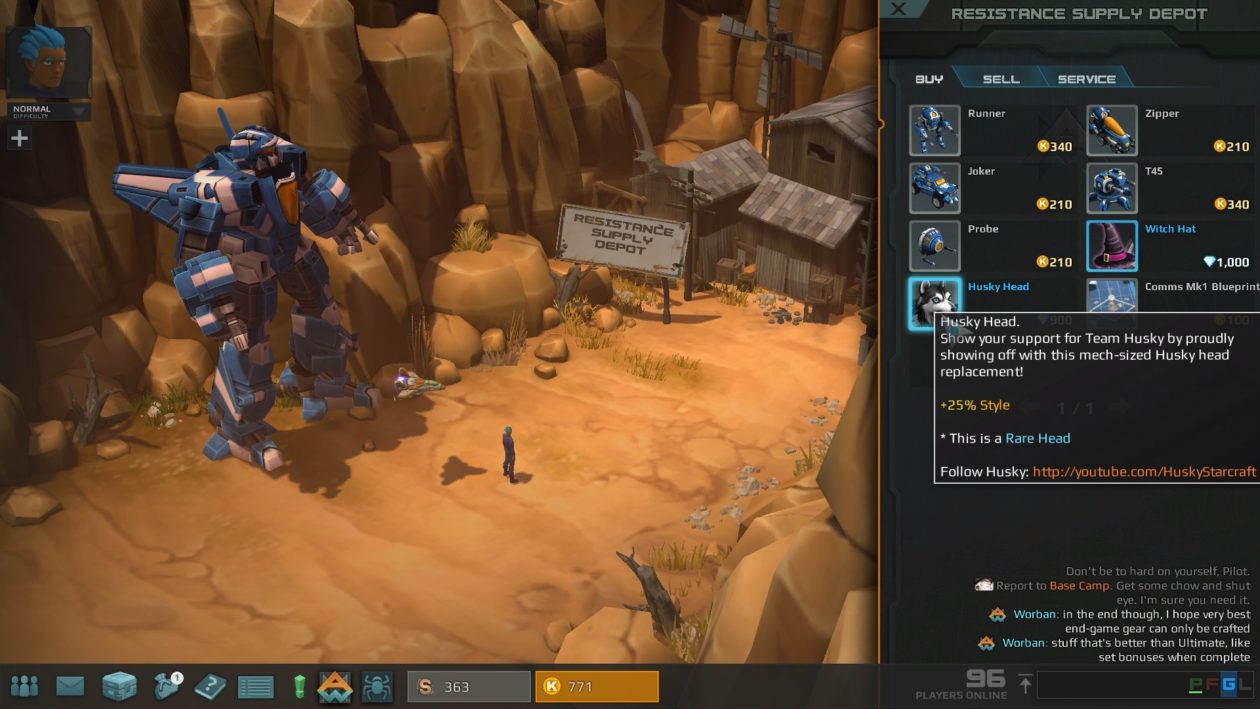 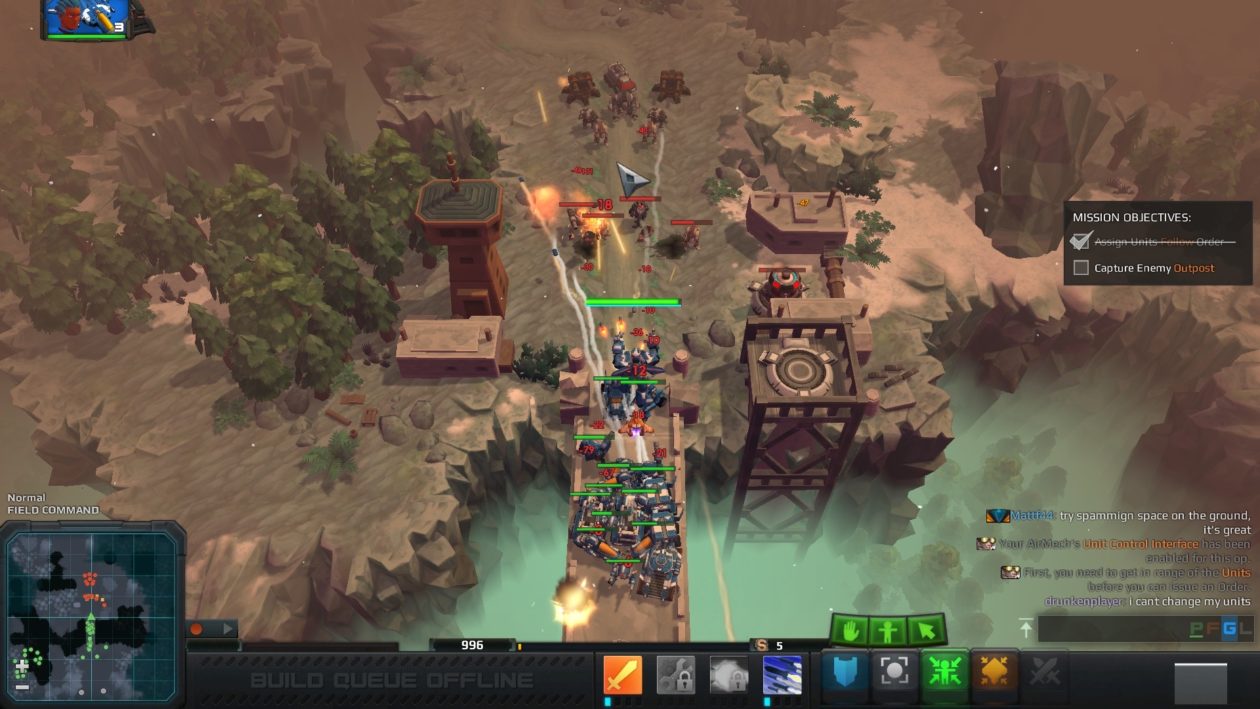 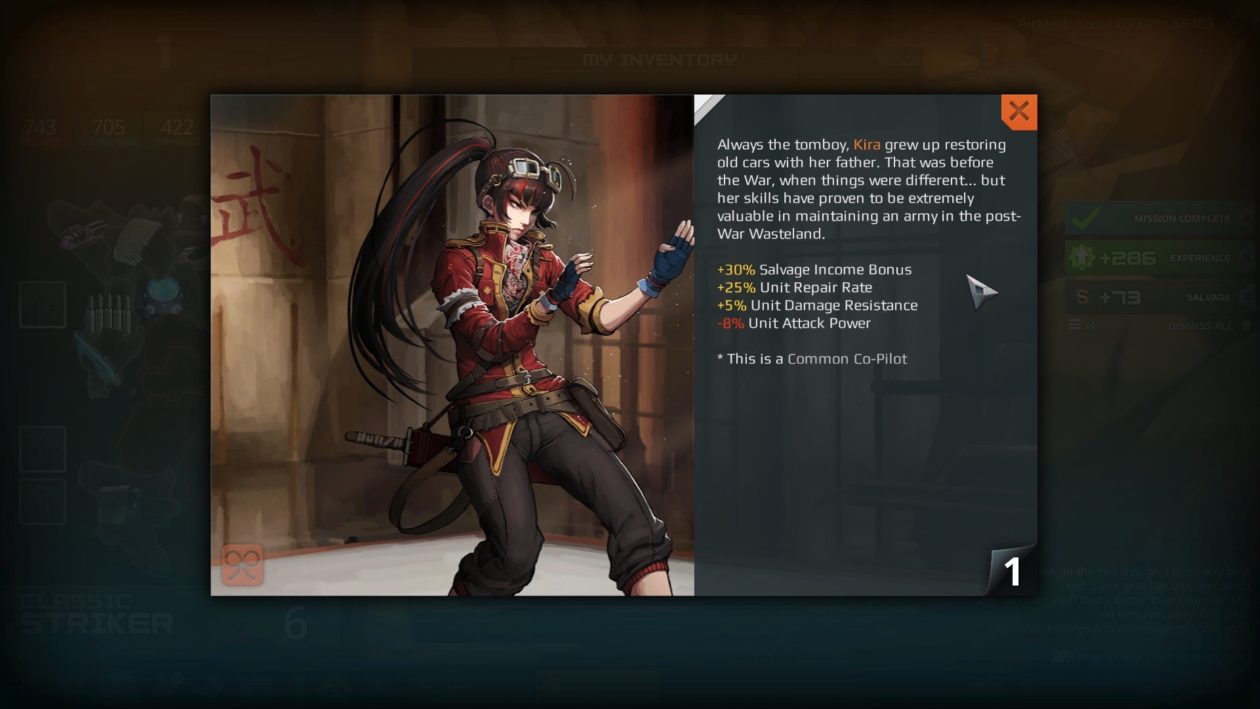 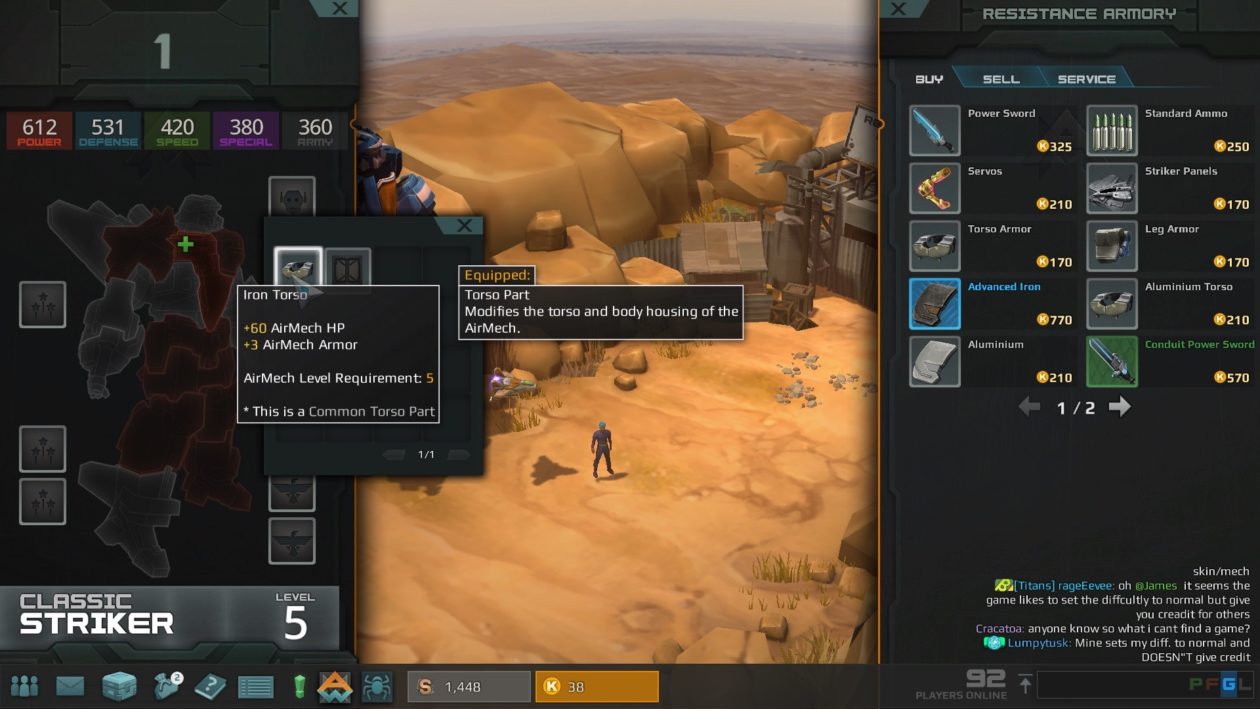 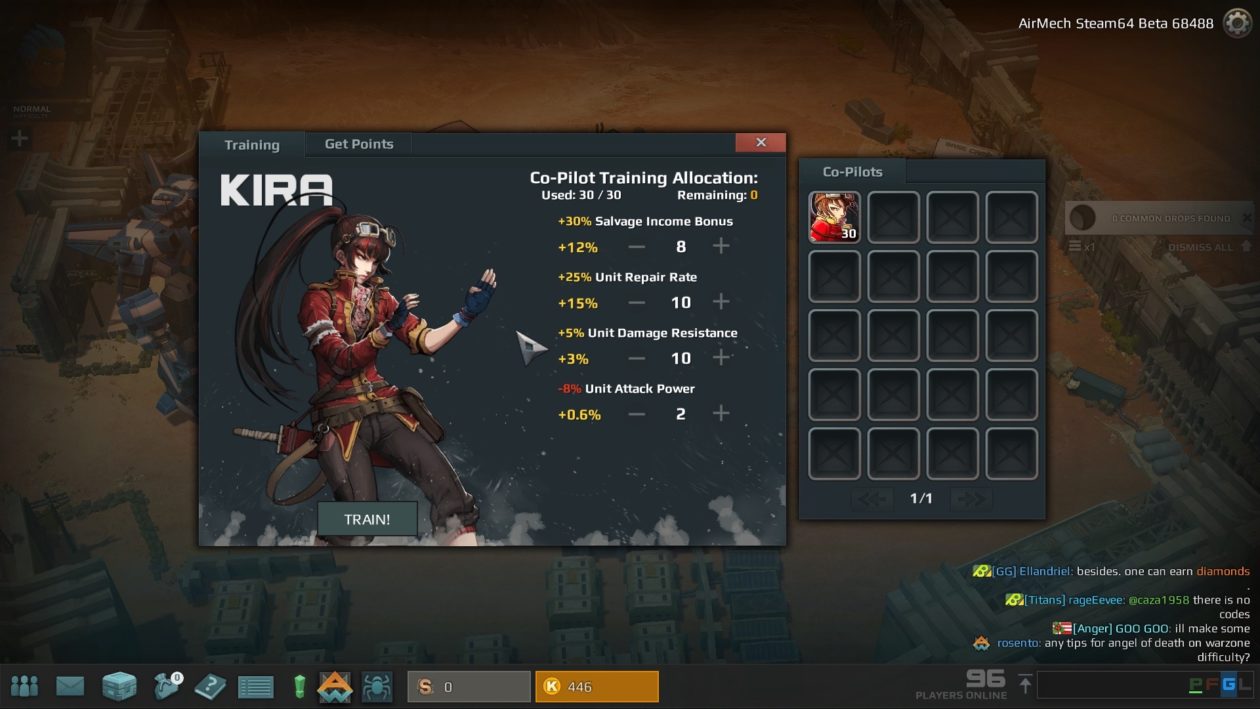 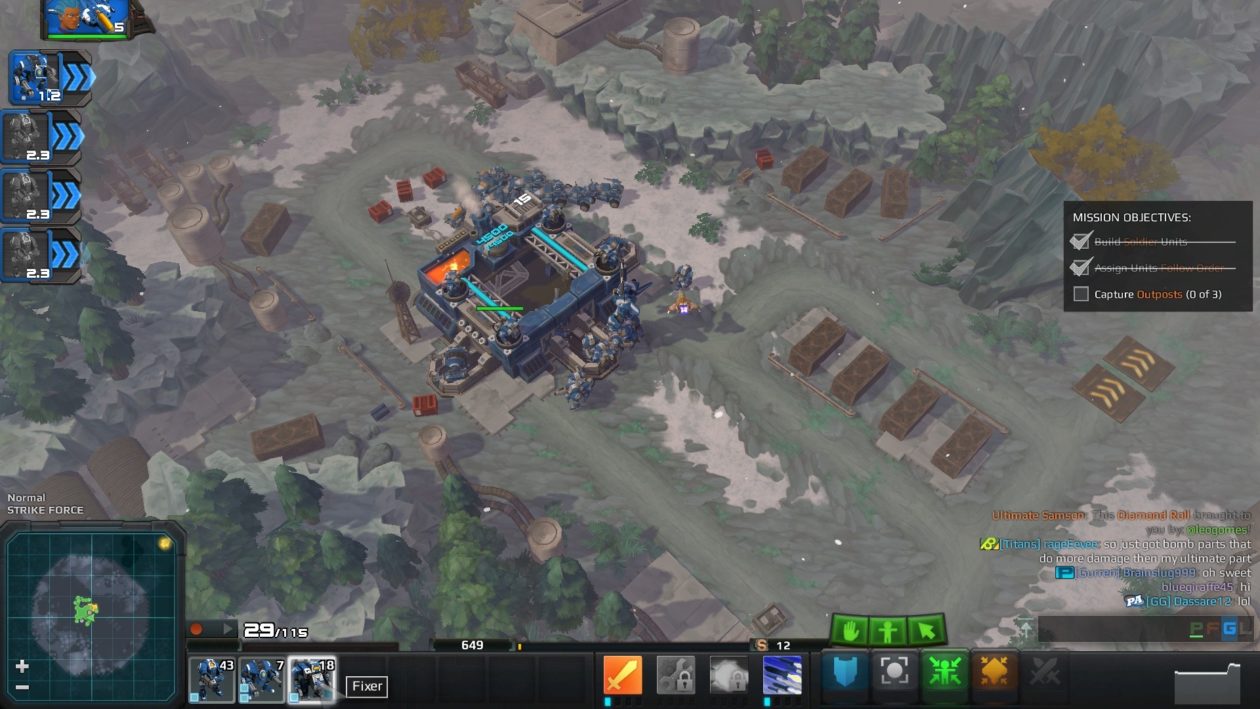 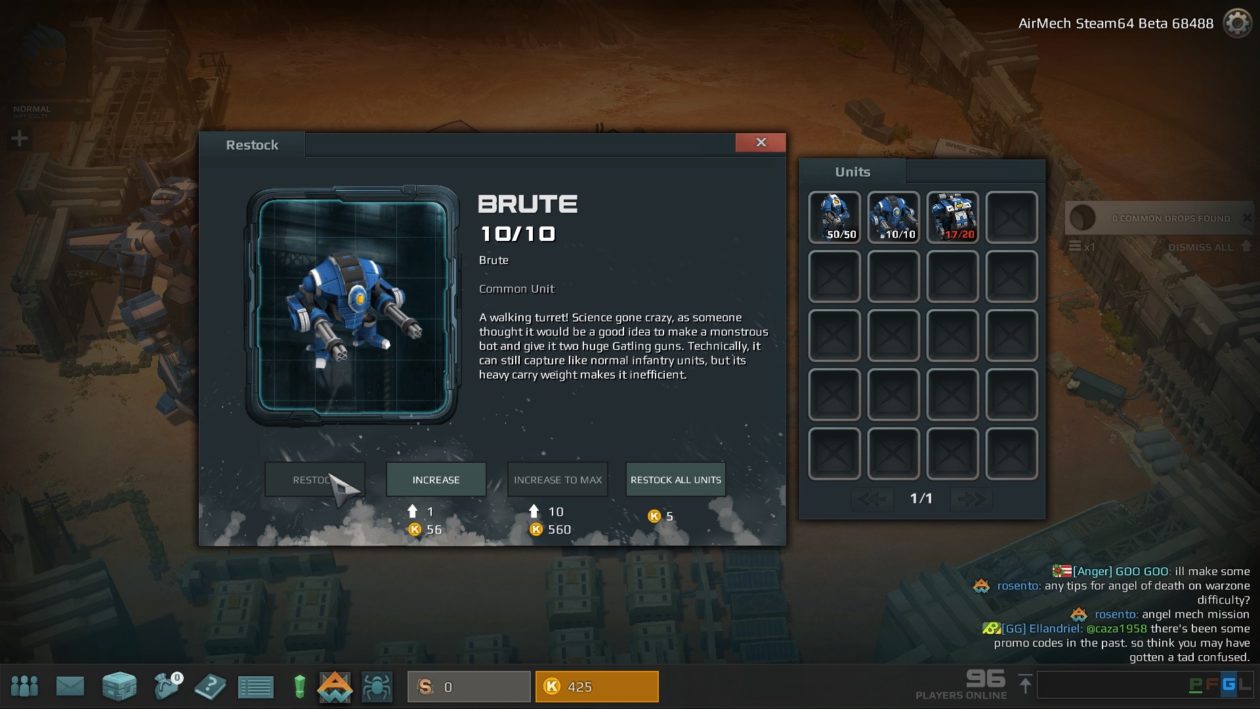 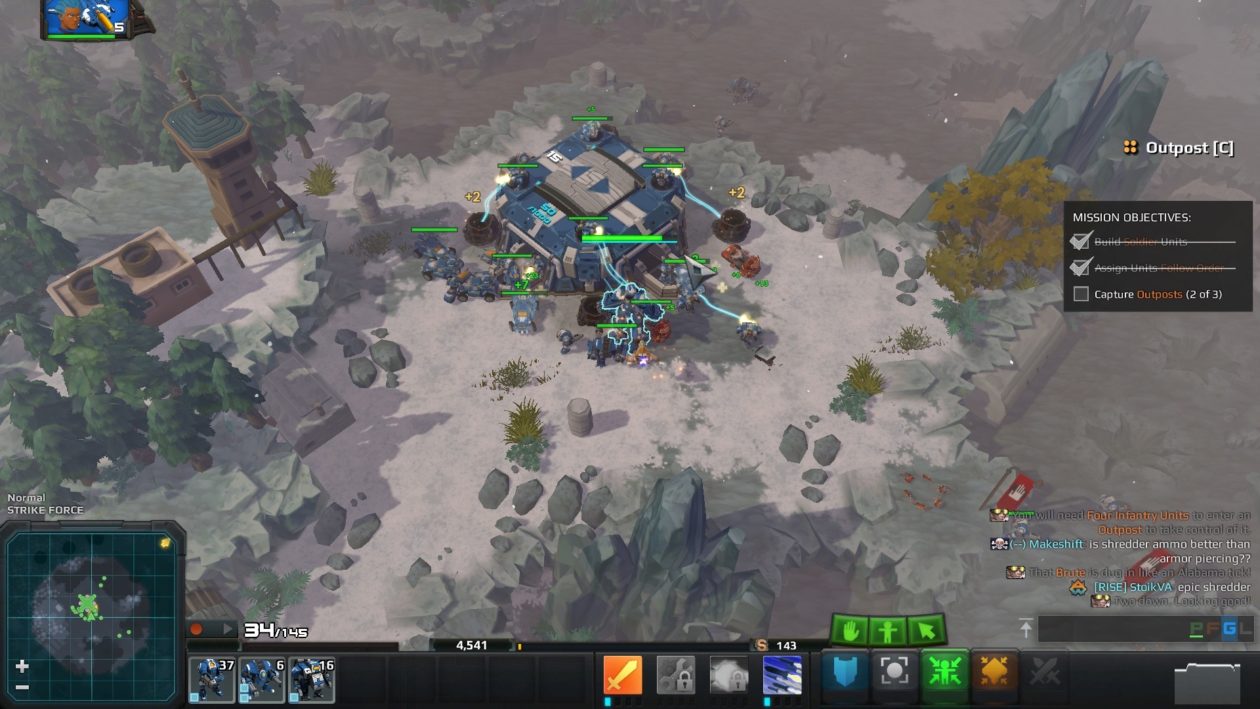 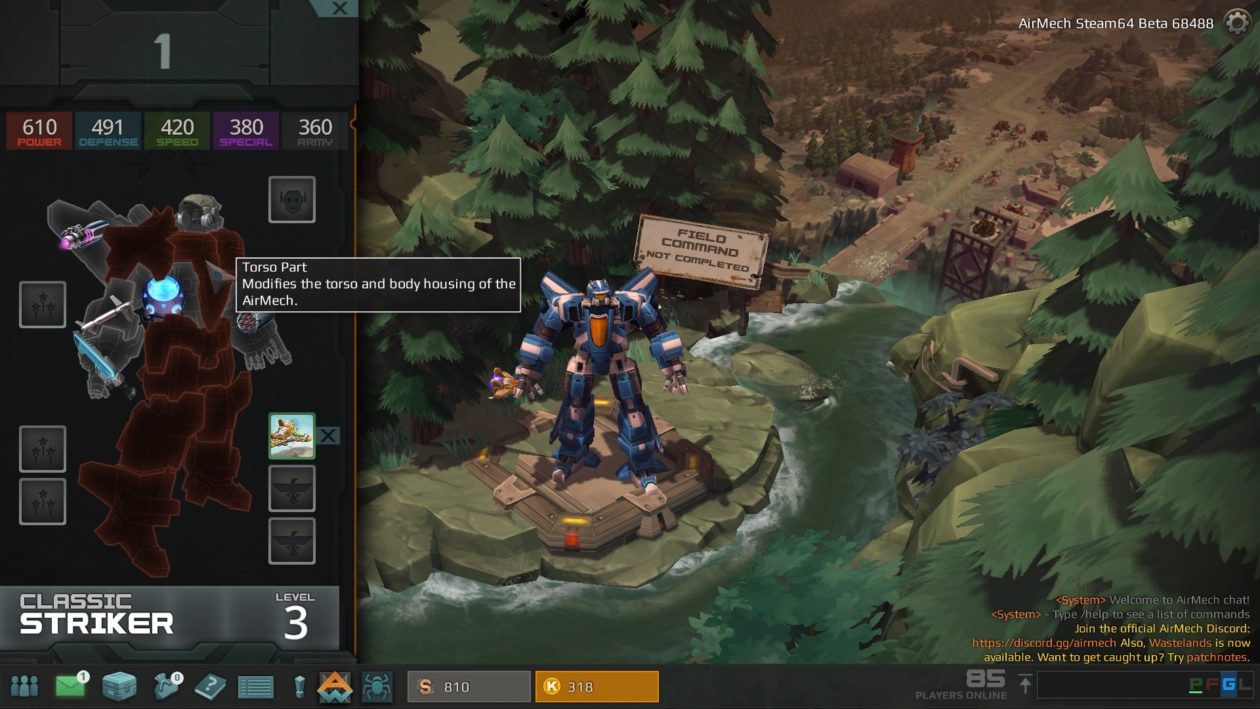 What’s impressive about playing Wastelands is its genre collision. At first, it reminds me a bit of an isometric dungeon crawler like Diablo. You can purchase new parts and weapons for your mechs, as well as receive them as drops from destroyed opponents, and keeping your gear up to date is a big part of the game.

By default, your mech has a pair of machine guns and a plasma sword and shield, either one of which lets you wade through most of the smaller enemy robots like Godzilla. (Really, if you’re not stomping helpless enemies into the dirt at some point, is it really a mech game at all?) Later upgrades let you swap out your mech entirely for different units, install missile launchers, equip a sniper rifle, and even equip little “pets” that follow you around. 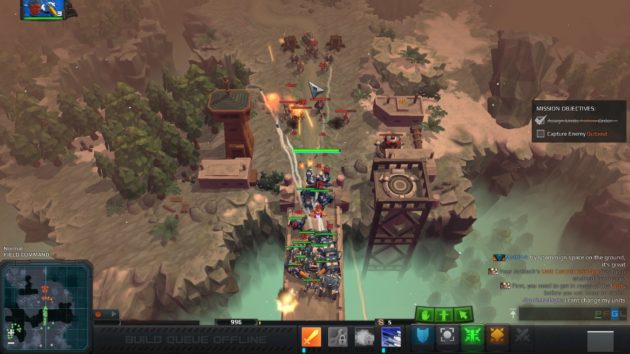 Once you get a few missions in, the game picks up a real-time strategy component, as you’re encouraged to recruit and build smaller autonomous units to work with you in the field. Some are cannon fodder; some are little “fixer” drones that heal you and your other units up; and some are giant, slow tanks which arrive right in time to end a fight with a single shot.

Before you know it, it’s been eight hours and you accidentally skipped two meals.

Then, after that, you can start building your own bases in the post-apocalyptic wasteland, training up co-pilots to give yourself passive bonuses, researching new types of units, and crafting new upgrades for your mechs. The economy in Wastelands mostly runs off of Kudos and Scrap; the latter drops from destroyed enemies and can be sold at stores, while the former is mostly obtained via rewards from missions. It’s the kind of thing that gently encourages you to keep playing just a little bit longer, so you can afford that new upgrade, and then you’ve got to test-drive it, of course, and before you know it, it’s been eight hours and you accidentally skipped two meals.

The missions change things up regularly, ranging from simple shoot-and-loot maps to bounty hunting, point defense, base capture, and even a couple of tower defense maps that require you to set up turrets. Wastelands is a relatively easy game for the first hour or so, but after that, things heat up rapidly and you need to start really focusing on improving your mech’s equipment and armor if you want to get out alive. What’s stopping my progress right now is a map with an enemy that’s acting like I assume a human opponent would, circle-strafing me in jet mode and retreating to heal the moment it takes any damage.

Wastelands is, at time of writing, a surprisingly complete product for an Early Access game. There are a couple of janky animations, especially when you’re walking around outside of a mech, and the UI feels a little unfinished, with a few opaque systems and a messy inventory system. You do get a lot of game here, though, especially for $20, and it juggles its “X meets Y” genre beerslam surprisingly well.