The hush-hush space startup Relativity Space is still in stealth mode, but CEO and co-founder Tim Ellis lifted the veil just a bit on the company’s business plan and eight-figure funding today in Washington, D.C.

Ellis shared the witness table with other space executives and experts at a Capitol Hill hearing organized by the Senate Subcommittee on Space, Science and Competitiveness to focus on public-private space partnerships.

“There are people who are crazy enough to think that they can change the very nature of space exploration,” Subcommittee Chairman Ted Cruz, R-Texas, said in his opening remarks. “And if they keep pressing forward, they just might.” 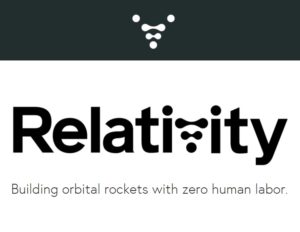 A year ago, when Relativity Space filed documents showing that it raised $8.4 million in investments, Seattle was listed as the company’s headquarters. But today, Ellis said that the company is now based in Los Angeles.

He also said in his prepared remarks that the investments have added up to an “eight-figure funding round” – that is, more than $10 million.

The round was led by Silicon Valley venture firm Social Capital, with participation by Y Combinator Continuity, Phillip Spector (formerly of Intelsat), the University of Southern California, Stanford University and other private investors, Ellis said.

The Seattle-L.A. connection reflects the background of Ellis and Relativity Space’s other co-founder, chief technology officer Jordan Noone. Both men are propulsion development engineers who worked at the University of Southern California’s Rocket Propulsion Laboratory in the 2010-2013 time frame.

They’re also both alumni of Blue Origin, the space venture that was founded by Amazon billionaire Jeff Bezos and is based in Kent, Wash. Noone went on to work at SpaceX after interning at Blue Origin.

Last year, Relativity Space said it was aiming to build rockets “with zero human labor.” Today, Ellis was a little more down to earth about the company’s focus.

“Relativity has begun testing of our liquid oxygen/liquid methane engine with over six dozen hot fires across multiple test articles at NASA Stennis Space Center, with plans for continued routine testing,” he said.

Ellis also said the company was also “hard at work developing a series of novel, never-seen-before technologies for creating our own orbital launch service and changing the way things get to space.”

He didn’t provide specifics on the technologies, other than to say the company has “achieved dramatic results that we will begin sharing publicly once out of stealth.”

However, Cruz confirmed in his remarks that the technologies include “3-D printing to build orbital rockets with zero human labor.”

Ellis’ aim in his testimony was to advocate startup-friendly government policies in support of commercial space ventures. His recommendations included:

Relativity Space is pursuing a path that’s similar to the one that Blue Origin followed for developing its rocket engines – down to the decision to test its engine at Stennis (the BE-3), as well as the decision to develop a methane-fueled engine (the BE-4).

If the startup keeps going down that path, Ellis may well find himself competing with – or perhaps collaborating with – his former employers at Blue Origin.

For what it’s worth, Sen. Bill Nelson, D-Fla., gave Ellis an open invitation to do so.

“Mr. Ellis … I want you to know we have a spot for you at what we generically call ‘the Cape’ for you to launch your rockets,” Nelson said at the hearing. “I’d love for Relativity Space to become a part of the community, the folks, as this exciting business is being built there.”