“There’s a lot of rhetoric around the country against immigration and the acceptance of refugees into the country and being that that’s a huge part of our industry as tech employees, some of our favorite co-workers are from other countries,” said Raine Dargis, one of the organizers of the event. “They’re here on visas. They came here with their families when they were young. We want that same legacy to be there for the next generation of tech employees.”

Dargis is a computer programmer for a large tech firm in Seattle. She agreed not to name her employer as part of the protest.

It’s been a little over a month since Trump signed an executive order restricting travel of citizens from a handful of predominantly Muslim countries. That order is stalled up in courts, thanks to a lawsuit brought by Washington state and largely supported by the tech industry. Trump is expected to announce a revised immigration order this week, though he has stalled signing it several times.

Dargis, like many of the demonstrators Wednesday, is concerned that the international pipeline for talent in the tech industry could be damaged by the Trump administration’s attitude toward immigrants.

“We don’t want to see that lane closed off … because there’s a lot of knee-jerk responses,” she said. “We don’t want those to make long-lasting changes that are going to harm our industry forever.”

Check out photos of the Seattle demonstration below. 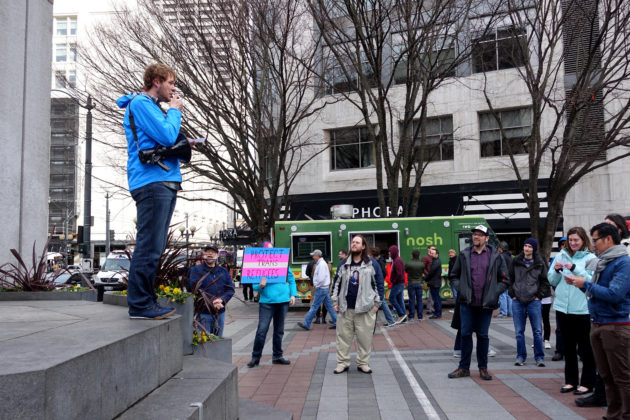