You’d have to be completely oblivious to miss the thousands of neon-colored bike-share bicycles that hit the streets of Seattle this summer. But have you looked for the ones that are not on the actual street, as in up a tree, on top of a troll or under water?

The green, orange and yellow bikes from various companies are ending up in plenty of places that they’re not supposed to. It’s bound to happen when unlocked bikes are parked all over the city. While the wheel-locking mechanism prevents bicycles from LimeBike, Spin and Ofo from being ridden off, it doesn’t prevent them from being toppled over or picked up and tossed.

A LimeBike spokesman told KIRO 7 that the company is certainly aware of various incidents, thanks to a loyal community of riders.

“Our operations team retrieves these illegally placed (not parked) bikes immediately,” Jack Song said. “A message that we do want to send to the bad players is: Destroying any of the bikes in the bike-share ecosystem is illegal and morally wrong,” Song continued. “People depend on the bikes for work, last-minute travels, emergencies. It is an attack on the overall transportation system in Seattle. Sometimes, it puts the lives of our LimeBike operations crew and our city partners, like Seattle Department of Transportation, in danger when we retrieve the illegally placed bikes.”

Images on Twitter and Instagram serve as daily documentation that, as folks like to say in the comments, this is why we can’t have nice things.

Plenty of people are surely using the services as they were intended and parking the bicycles properly so that the next person can find a ride and enjoy it. But whether it’s boredom, a silly prank or plain old vandalism, here’s a look at bikes around Seattle that have been taking a bit of a beating:

FYI – This is not where you're supposed to leave a @Limebike ➡️ https://t.co/izzI2DLRJT pic.twitter.com/9Y8yIo0wjc

@LimeBike_SEA – I'm sad to report that 2 of your bikes are IN Green Lake. pic.twitter.com/vuCf1zJYHs

@LimeBike_SEA my daughter & I can't decide if someone is trying to save a bike for their next trip or if this is a new kind of like tree. pic.twitter.com/8VLpalgKx7

If anyone is looking for a @LimeBike_SEA, there are a few available near 4th & Jackson…nice placement. pic.twitter.com/qoY5zngFeY

That feeling when your commute gets complicated….your bikeshare bike turns out to be dangling 20 ft up in the air… #limebike #biking #bikeshare #seattle #timetofindanewbike

It's not hard to get a rental bike in seattle…. it's just that you need to have skills to RIDE it. . . . #bikeshare #seattle #rentalbike #limebike

It appears that sometimes you're in a hurry and just have to leave your @limebike_sea @limebike Whomever rescues this bike, enjoy your ride! #lakeunion #seattle #limebike #summer2017 #bikeshare #notmybike

Captured by Erik. What happens to the rental bikes in Seattle #why #limebike

UPDATE, Sept. 4, 2017: Here’s a scene from the PAX West game convention this weekend in Seattle, photographed by Chris Atienza. 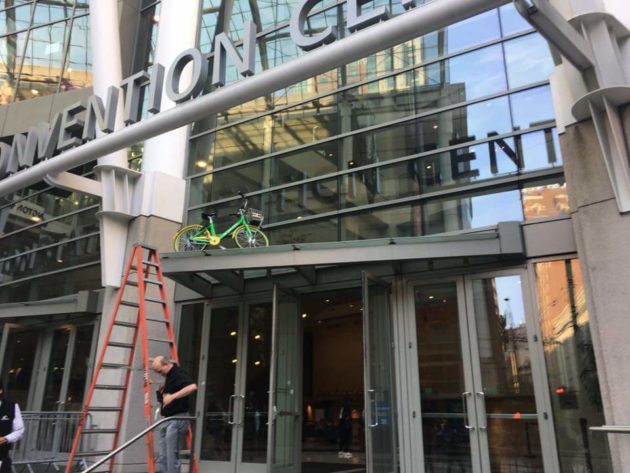 UPDATE, Sept. 15, 2017: Did someone just ride this thing off the highway? A LimeBike was spotted hanging from the fence high above the I-5 offramp at Northeast 50th Street in Seattle’s University District.

UPDATE, Sept. 18, 2017: We can only imagine needing a bike and following the signal on this pile.

not quite what they had in mind #seattle #bikeshare

UPDATE, Sept. 19, 2017: A photo on Reddit shows an ofo bike at Rainer Avenue South and South Charles Street that is going nowhere fast without its wheels or its seat. At least they left the handlebars. And the basket. And pedals.

UPDATE, Oct. 28, 2017: Spotted in Seattle’s University District by Victor Balta. Does this qualify as art?

UPDATE, Dec. 5, 2017: You know you can’t spell bike without ike. This LimeBike was definitely high after being placed by someone on the awning above the sidewalk at Uncle Ike’s, a pot shop in Seattle’s Central District, at 23rd Avenue and East Union Street. 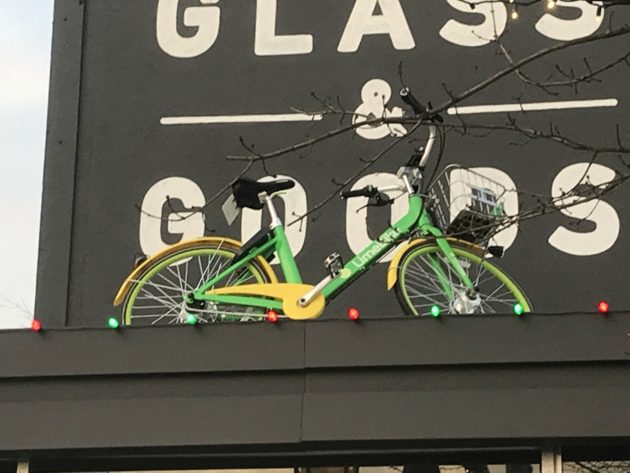 UPDATE, May 24, 2019: The Evergrey shared a photo on Instagram of a red JUMP bike parked in what might be the most confusing place we’ve seen in a couple years of watching for these. The new SR 520 floating bridge over Lake Washington now features a bicycle path, but this commuter clearly had a different route in mind.