Cities across the continent are competing for Amazon’s second corporate headquarters and the 50,000 high-paying jobs that will come with it. But new data on the relationship between a booming downtown tech industry and housing affordability serve as a reminder that the winner will have some new realities to grapple with.

Zillow crunched the numbers to get more concrete data on the impact Amazon has on rents in its hometown of Seattle. Before we jump into the stats, it’s important to note that Zillow studied what it calls the “South Lake Union jobs boom” rather than Amazon specifically. The e-commerce giant undoubtedly dominates the neighborhood — nicknamed “Amazonia” — but it is hardly the only employer located there.

Seattle rents increased by $0.11 on average per square foot, per year between 2011 and 2015. Zillow economists attribute about $0.07 of that $0.11 spike to the South Lake Union jobs boom. In other words, a Seattle renter with a 650-square-foot, one-bedroom apartment saw her monthly payment increase by about $44 each year between 2011-2015 as a result of job growth in South Lake Union.

South Lake Union and adjacent areas also have the highest concentrations of people who work and live in the same neighborhood, Zillow says.

“What we’ve seen here in Seattle is, oftentimes, we weren’t fast enough in producing enough housing, especially in our current inventory tightness and that’s really driven up rents as well as home values along the way,” said Svenja Gudell, Zillow’s chief economist, in an interview with GeekWire. “Not simply because of Amazon specifically but the fact that Amazon is here has attracted a lot of other people.” 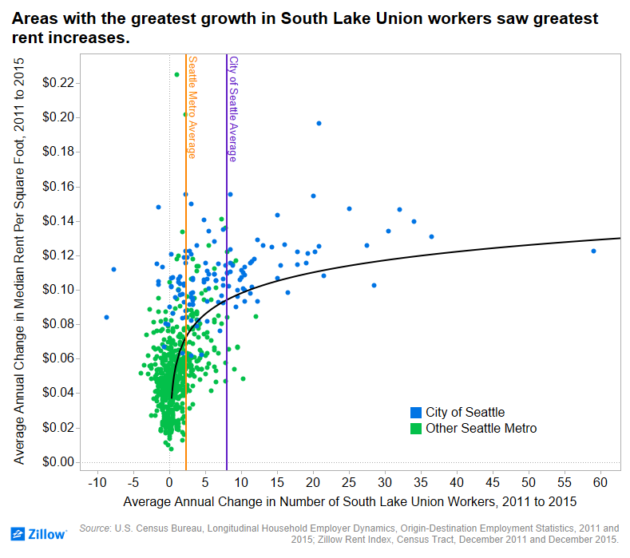 Of course, job growth in the tech sector isn’t the only factor driving up rents in Seattle. The city has geographic limitations that can impede development. It also still has relatively low housing inventory compared with demand. Gudell says that if Zillow did the same study in a city with more housing inventory, like Detroit or Atlanta, it would yield different results, even with a big employer drawing large numbers of high-paid workers.

“Rents didn’t increase simply because Amazon is located in Seattle,” Gudell said. “Rents increased for a bunch of different reasons. One of them is Amazon, or more specifically South Lake Union jobs … 20 percent roughly was contributed by that but then there are a whole bunch of factors that also make up an increase in rent.”

Amazon’s breakneck growth in Seattle was also impossible to predict. The company has grown so aggressively over such a short period of time, and Seattle hasn’t been able to build enough new housing to keep up. That presents an interesting opportunity for the city that wins HQ2: the chance to plan for the influx of 50,000 Amazon employees, their families, and the workers at businesses that serve those employees.

“It really is interesting to see what can happen if you have high concentrations of workers quickly growing in an area, what kind of impact that can have on rents,” Gudell said. “You’re probably hard-pressed to find another example like this with another company just because Amazon has been growing so fast and has been attracting so many other people that it has shaped the city’s rental landscape quite a bit at this point.”