Microsoft CEO Satya Nadella has a message for 54 student teams from 39 countries that descended upon the company’s Redmond, Wash. campus this week for the 15th annual Imagine Cup competition: The future is yours, so think long and hard about how you want to spend your time.

Nadella said Microsoft was started by student developers, so it’s only fitting that the company works to nurture the next generation of young innovators. He noted that we live in a time where technology is changing everything, and these teams are at the forefront of that movement.

“In a time like this, where every walk of life in every society and every economy is being fundamentally changed and shaped by digital technology, developers like you are going to change the world,” Nadella said. “You’re going to bend that curve of progress.”

Because of that, Nadella implored these young developers to use their talents for good causes. Microsoft noted that 40 percent of the teams focused their projects on the medical field.

“You are very blessed,” Nadella told the crowd of developers. “You are in tech, you have the capability around computer science, in a time like this, when everything is being shaped by digital technology, so there’s only one thing you have to get right at this point because you have won the lottery already. Now the question is how do you spend the money? Spend it wisely.”

Here is a look at the teams still in the field, including the eight semifinalists, as well as two wildcard teams. The final four teams will be announced later today:

UPDATE: Here are the finalists for this year’s Imagine Cup: NeuroGate, OcuLogx, Nash and X.GLU. 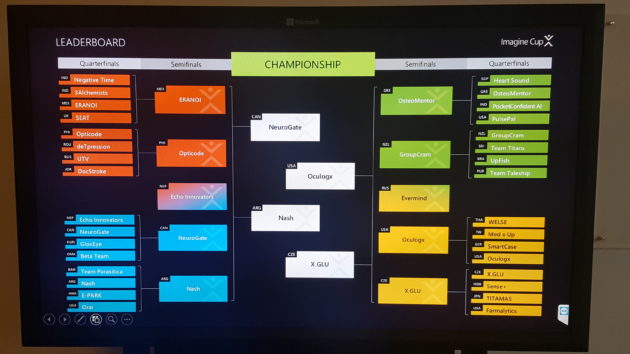