VAR made its debut at CenturyLink Field in Seattle this past weekend.

VAR, also known as “video assistant referee,” is new technology that Major League Soccer is piloting to help review plays during live matches. It consists of an on-field monitor and an MLS official who communicates with referees while watching the game somewhere at a given stadium.

MLS first began testing VAR this past February and expects to fully implement the system next month after the All-Star Game. It’s similar to video review protocols established by the NFL and more recently in Major League Baseball.

The Seattle Sounders FC saw the VAR in action on the sidelines for the first time during its friendly against Germany’s Eintracht Frankfurt on Saturday at CenturyLink Field. GeekWire was there to see how it all works. 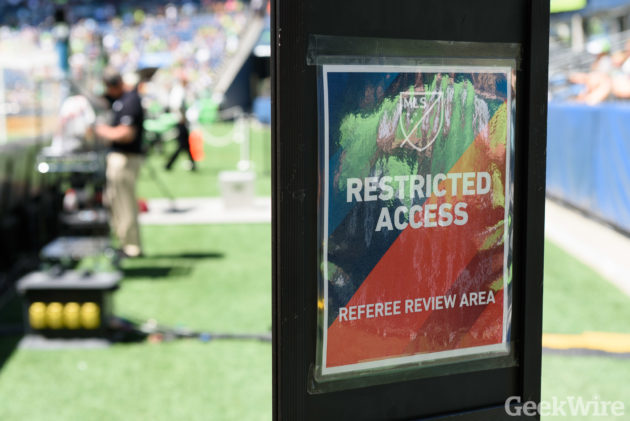 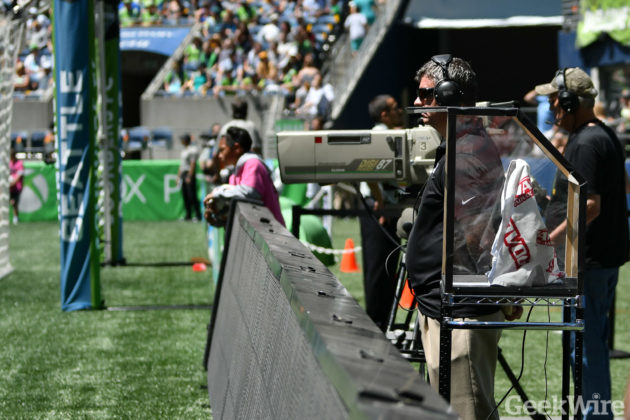 VAR, which is used to review goals, penalty decisions, straight red cards, and cards issued to the wrong player, wasn’t actually needed during Saturday’s match. But as the system is implemented league-wide next month, MLS fans will surely see it in action at some point this season.

The video assistant referee, sitting in the “Video Assistant Referee Operations Room,” checks plays for clear errors and serious missed incidents using all available footage and angles from the broadcast, as well as in-house footage from the in-stadium videoboard. He or she can recommend a review to the on-field head referee; however, only the referee can ultimately initiate a review by drawing an outline of a TV.

The head referee then walks over to the on-field monitor, or the “Referee Review Area” that you can see in the photo above. A “Referee Assistant” ensures that the monitor is operating and assists the head referee, who communicates with the VAR via headset. The head referee ultimately makes the final decision. There are currently no time limits for video review. 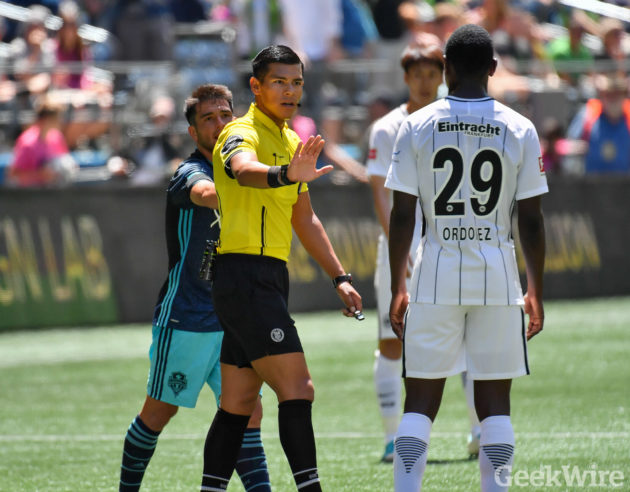 MLS Commissioner Don Garber, speaking at SXSW earlier this year in Austin, Texas, voiced his support for VAR. He noted that MLS simply needed to get with the times given how other leagues like the NFL and NBA use replay technology — he said fans “deserve” it.

“We have to adapt to the way the North American sports fan consumes their sports,” said Garber, who spent 16 years at the NFL before becoming MLS commissioner in 1999. “I believe the lack of technology was unfair to the fan.”

In the preseason tests, Garber said out of the 20 or so plays that were reviewed by the new technology, about 20 percent had a dramatic impact on the game. One of those instances happened during the Colorado vs. Kansas City match in February when the Rapids were awarded with a penalty kick after referees used VAR to confirm a handball violation.

MLS had to work with FIFA and IFAB, two soccer governing bodies that oversee some MLS rules, to implement VAR. The league won’t be able to show replays on the big-screen inside stadiums because of FIFA’s discretion. Garber said the system will “ultimately evolve” and “be like it is in other leagues.”

VAR was used during the Confederations Cup last month and as ESPN noted, it caused “as much confusion as clarity.” The system will be used during the World Cup next year.