REDMOND, Wash. — Kymeta Corp.’s Toyota RAV4 sport utility vehicle and the flat-panel satellite antenna on its roof are back at the company’s headquarters after a 7,000-mile test drive across America, and few people are more relieved than Benjamin Ash.

“I’ve never seen anything coming back from being out in the field that long,” Ash, who is Kymeta’s director of manufacturing engineering, said after examining the stop-sign-sized panel. “I thought it was going to be much worse.”

Ash and about a dozen of his fellow Kymeta employees gathered in Kymeta’s parking lot today to celebrate the car’s return to its Redmond headquarters after a two-week, coast-to-coast odyssey.

The trek served as Kymeta’s beta test for a new mobile satellite internet service called Kalo, provided in partnership with the Intelsat satellite network. Kalo is the centerpiece service offering from Kymeta, which was spun out from Intellectual Ventures in 2012 with backing from Microsoft co-founder Bill Gates and other high-profile investors.

David Fotheringham, product manager for Kymeta’s connected-car effort, drove the Kalo-enabled car all the way from Washington, D.C., down to the Florida Keys, back up to Chicago, westward through Texas, the Southwest and California, and then up through Portland to Redmond on Sunday.

Thanks to the satellite connection, Fotheringham could connect to the internet in unexpected places, including hurricane-hit areas of Key West.

“It was pretty obvious straight away that there were major problems they were dealing with there … that a solution like this could provide immediate value,” he told GeekWire during a drive-around in Redmond. “We could be out there right now, helping them with their connectivity issues.”

That’s exactly what Kymeta and its partners are doing in Puerto Rico and Dominica, thanks to a fleet of antenna-equipped vehicles that are providing basic internet services for relief agencies on those storm-ravaged islands.

The benefits of satellite service for first responders got an even earlier demonstration when Kymeta sent its antenna-equipped RAV4 to Greenville, S.C., to beef up data coverage during August’s total solar eclipse.

Emergency response is just one of the potential applications for connected-car technology. Satellite connectivity could become an attractive option for ubiquitous phone and data access from your car (including video for the kids riding in the back seat). And some experts say it’ll be an absolute necessity for fully autonomous vehicles that require 100 percent reliability.

But today’s drive-around demonstrated that connected cars aren’t yet fully ready for prime time. That’s not because there’s anything wrong with the antenna. It’s because mobile satellite reception isn’t yet a totally sure thing.

When we had a clear shot at Intelsat’s spacecraft in geostationary orbit, we could sit in the back seat and watch YouTube clips on a tablet screen, or make Skype phone calls via satellite from our smartphone. But when the signal was blocked by buildings or trees, all we could get were spinning circles on the screen.

“If you’re in a heavily tree-lined area, then yeah, you’re going to have blockages that prevent connectivity,” Fotheringham said.

There’s also the throughput issue: Fotheringham said that Kymeta’s antenna is capable of supporting data speeds of more than 100 megabits per second. However,  today’s satellite links typically limit the throughput to 5 to 10 Mbps for downloads and 1 to 2 Mbps for uploads.

Fotheringham said all that is expected to change once internet satellite constellations get established in low Earth orbit, or LEO. Getting a strong signal should be less of a challenge, throughput speeds should be higher, and the lag time for signal transmission should be reduced from today’s 500- to 800 milliseconds of latency to a level comparable to traditional cellphone service.

SpaceX, OneWeb and LeoSat are among the companies developing LEO constellations, with an eye toward starting service around 2020. Fotheringham said any of those companies could make use of Kymeta’s antenna capability. For what it’s worth, Intelsat has a partnership with OneWeb as well as Kymeta, which hints at how Kalo could evolve in the years ahead. 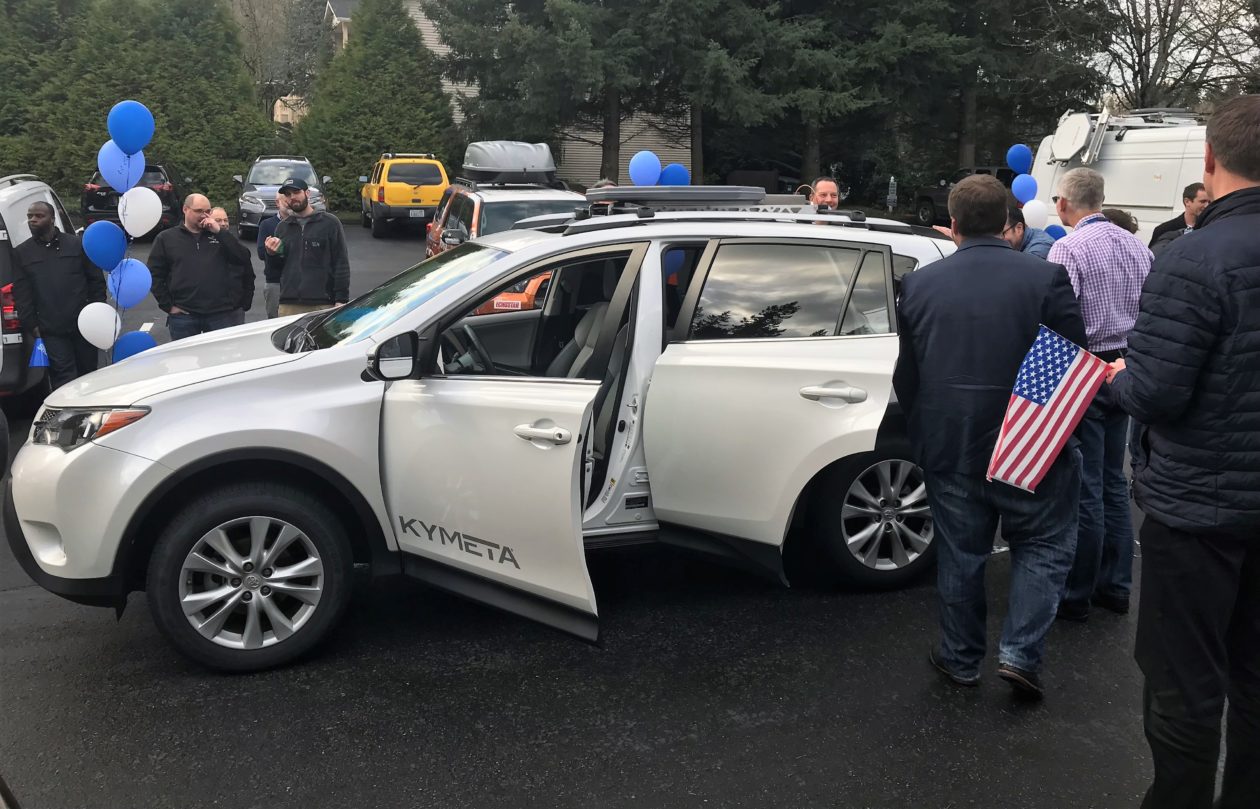 Kymeta employees get a look at the antenna-equipped car. (GeekWire Photo / Alan Boyle) 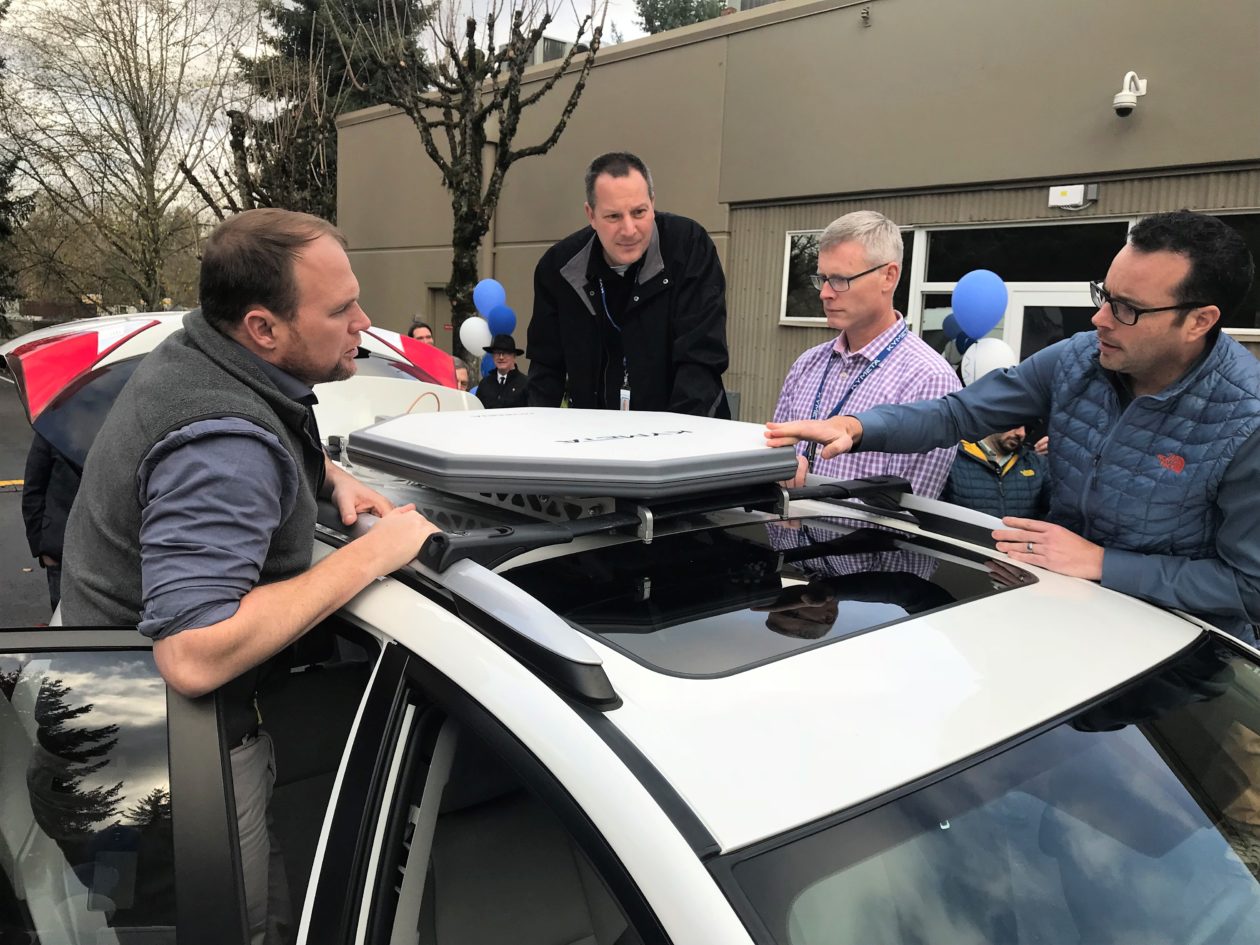 Kymeta’s employees, including Benjamin Ash (second from right), get a close look at the octagonal antenna. (GeekWire Photo / Alan Boyle) 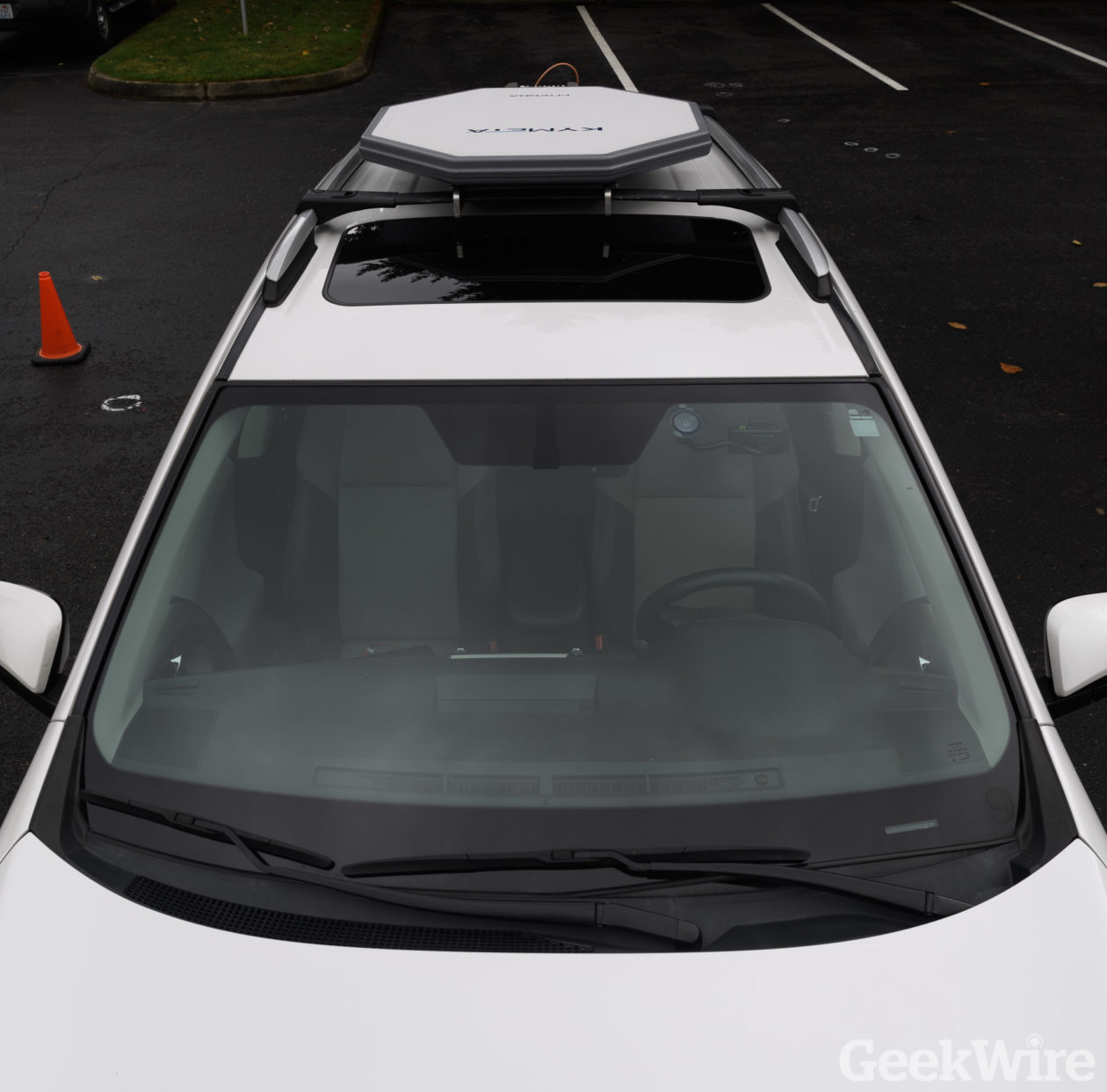 The antenna is mounted on the car’s roof rack. (GeekWire Photo / Kevin Lisota) 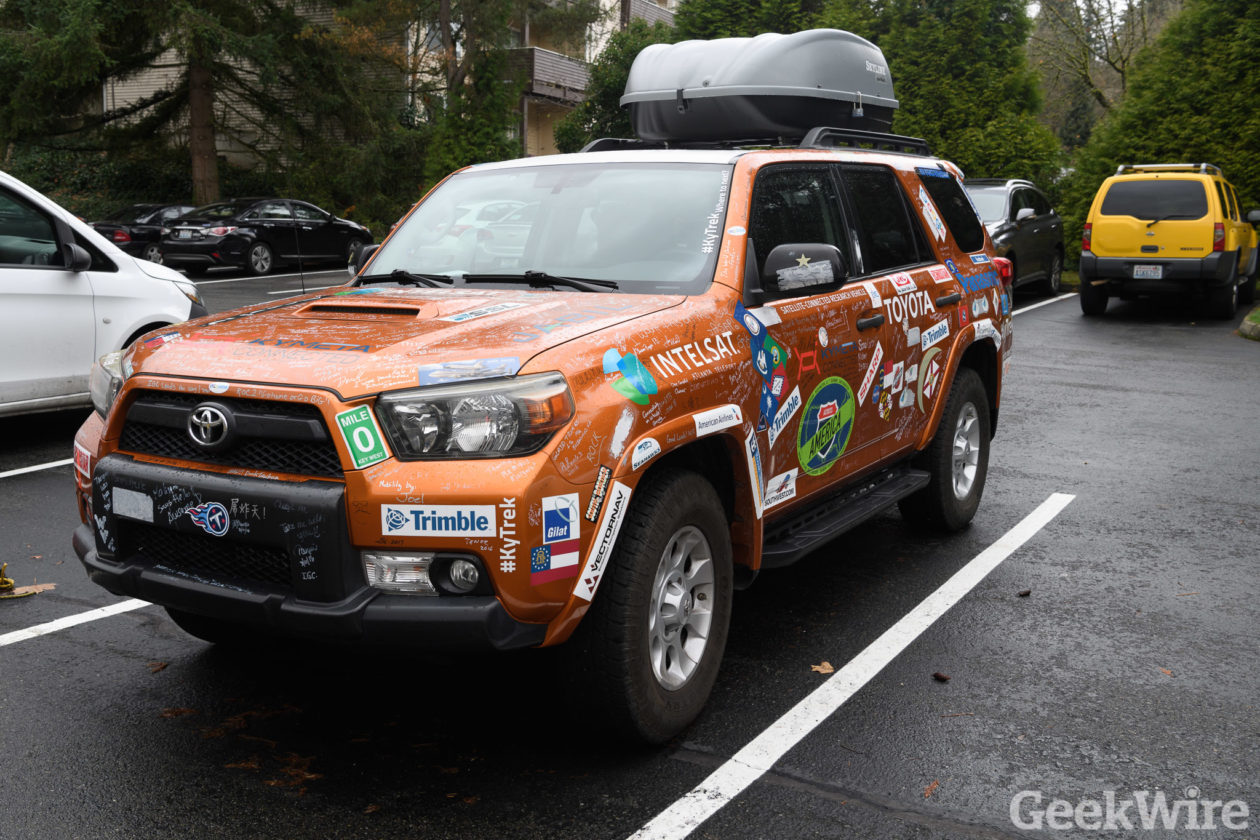 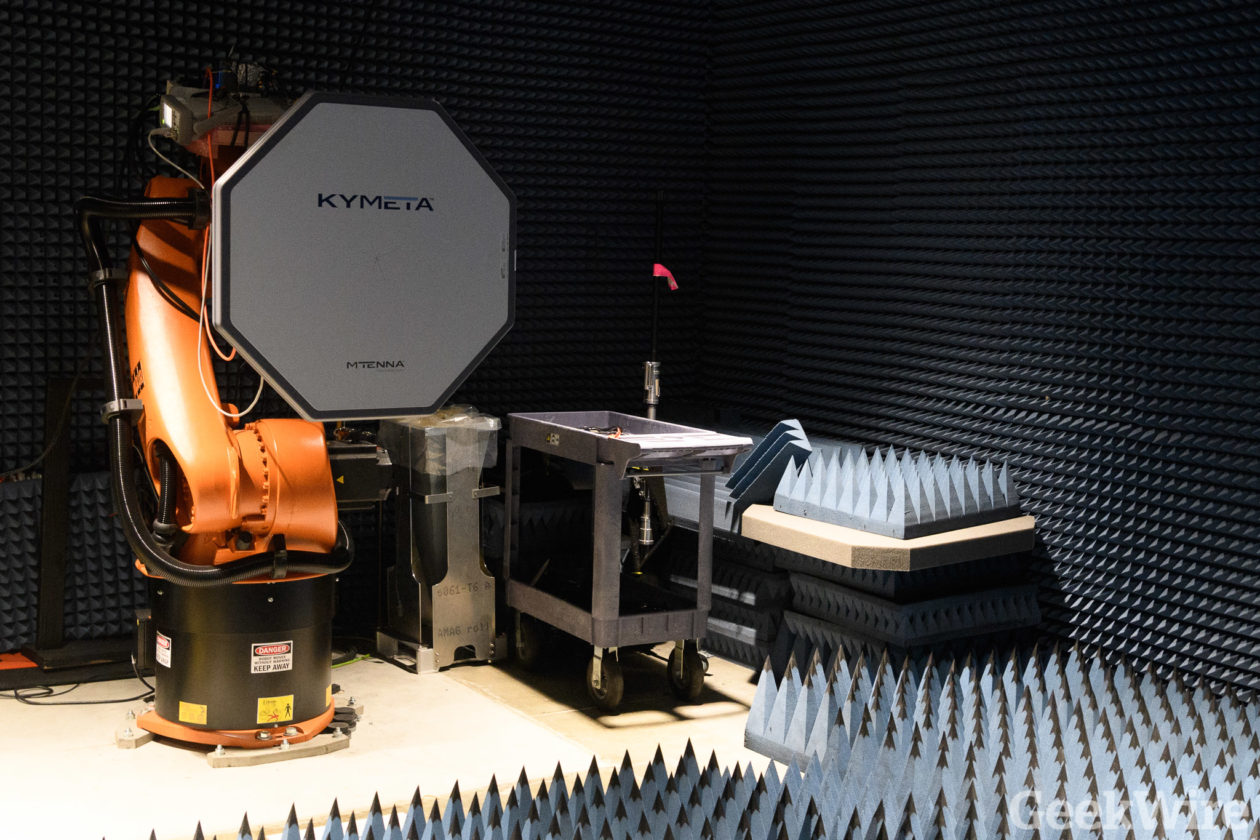 Kymeta’s flat-panel antennas are attached to a robotic arm for testing in a super-soundproof room that’s technically known as an anechoic chamber. (GeekWire Photo / Kevin Lisota) 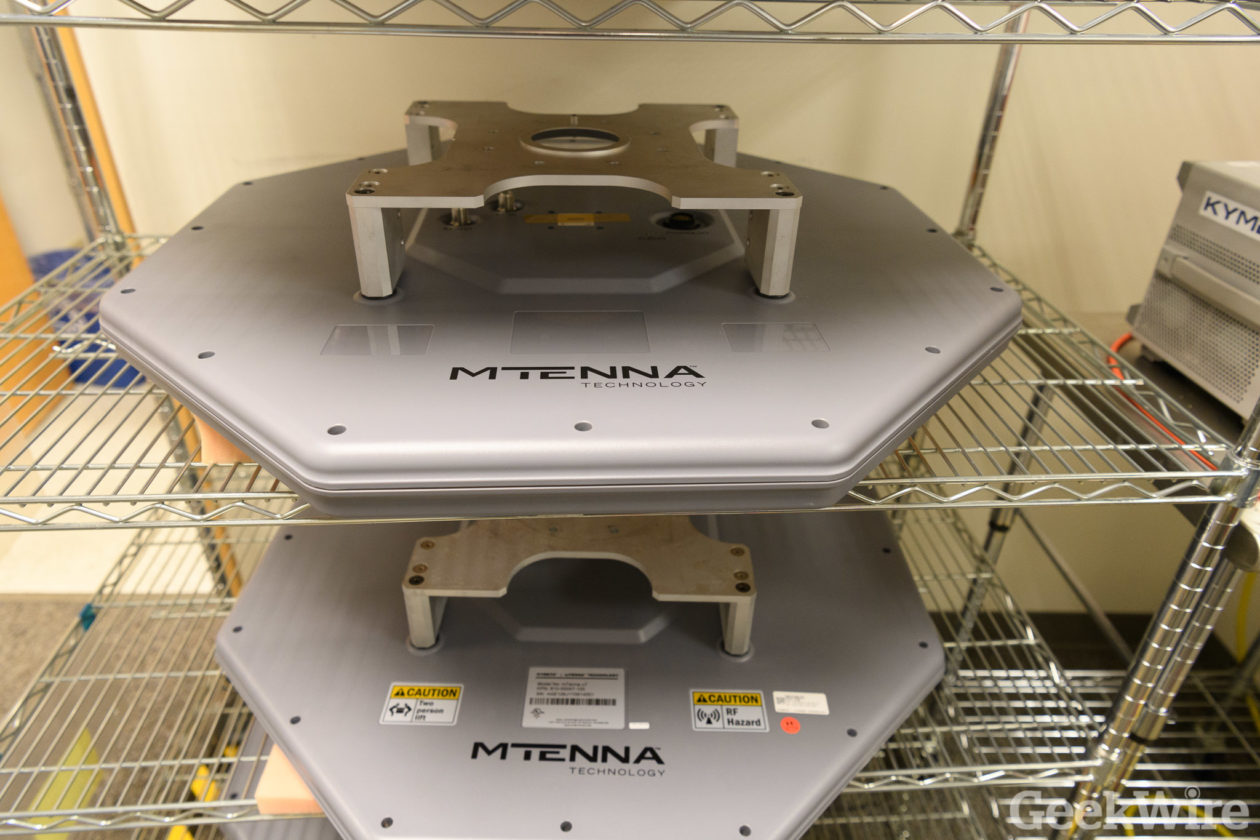 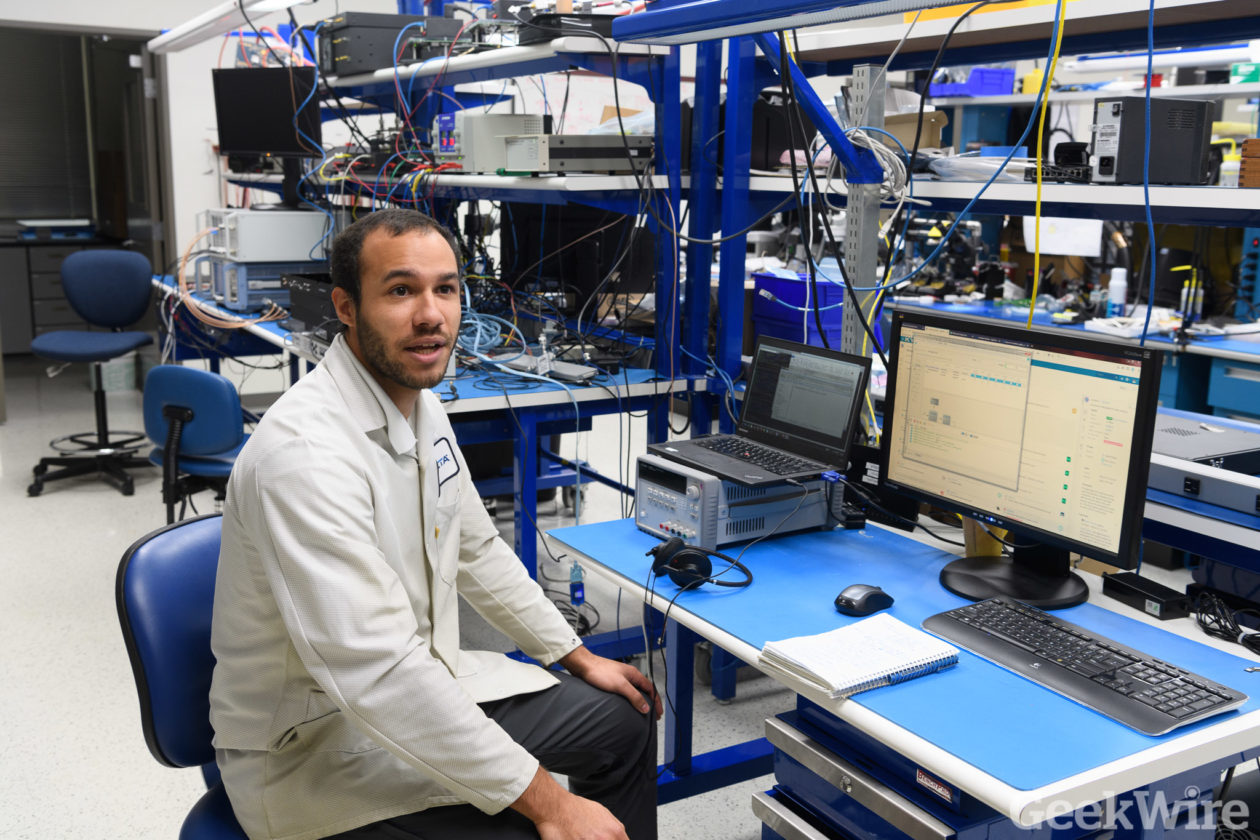 In reality, connected cars — and the mobile devices that take advantage of those cars’ connections — are likely to switch seamlessly between different types of hookups once carmakers start building antennas into the roof. Drivers and passengers won’t necessarily know whether their car is getting its internet via LTE or 5G cell service, LEO or GEO satellites, or plain old WiFi in the rest area.

“We’re not looking at this as a replacement for LTE,” Fotheringham said. “I see this as part of a hybridized 5G network. This becomes a merged space, so you can have either satellite or LTE, depending on where you are and what’s available to you. … I don’t think people actually want to care about, ‘Is their internet coming from satellite or terrestrial?’ They just want it to work.”

Now that the “Kalo Trek Across America” is finished, the test antenna will be removed from the roof, and the SUV that Fotheringham drove across the country will revert to being just another car. But this isn’t the end of Kymeta’s odysseys.

Ash said that the stop-sign-sized antenna is “three generations behind where we are now,” and that Kymeta is already working on flat-panel antennas that are less than a third as wide. “Every single time we drop the radius of the aperture, we’re going to want to do this again,” he said.