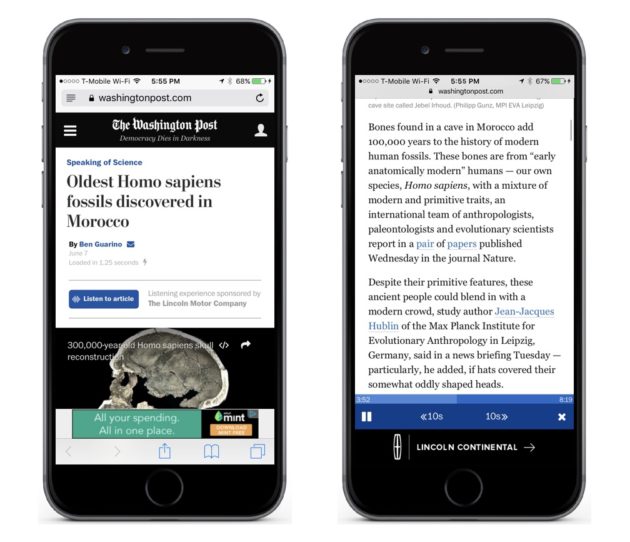 Jeff Bezos’ worlds are coming together as The Washington Post announced today that it has begun testing a plan to use Amazon Polly to translate written articles into lifelike speech.

For the next month, select articles on mobile from categories like business, lifestyle, technology and entertainment will include an option for people to listen to rather than read the content. Users will be able to listen to four stories per day under the pilot.

“This is a new technology that can give users more choice and better accessibility to our content, so we wanted to create an experiment to dive deeper into the user experience,” Joseph Price, product manager at the Post said in a statement. “After a month, we’ll take what we’ve learned about how users engage with this feature to develop our first iteration of a product with Amazon Polly.”

Text-to-speech can be clunky, but Polly aims to sound and speak like a human voice, so the effect is closer to a friend reading a story aloud rather than an awkward computer voice. Polly uses advanced deep learning technologies and includes 47 voices across 24 different languages. Speaking at the 2017 GeekWire Cloud Tech Summit, Swami Sivasubramanian, vice president of artificial intelligence for Amazon Web Services, laid out several other uses for the service, including nonprofits that use Polly to make audiobooks and educators developing language courses.

When Bezos bought The Washington Post for $250 million in 2013, one big question was how he would use technology to disrupt national journalism. While some say Bezos is revolutionizing the news business, others point to the Post doubling down on traditional journalism and investing heavily in new ways to deliver it, through smartphone apps, voice-activated speakers and e-readers. Integrating Amazon Polly for text-to-speech delivery of news seems to be another example of the latter.

The approach seems to be working. Late last year Washington Post Publisher and CEO Fred Ryan sent a memo to staff, saying the Post is “profitable and growing.” That was followed by a report that the Post planned to hire dozens of journalists as it continues to remake itself as the fourth national newspaper in the U.S.