UPDATE: Comcast tweeted at 12:38 p.m. PT, saying that issues should be resolved for almost all customers.

Internet issues should now be resolved for almost all customers. We apologize for the inconvenience & thank you for your patience.

On Nov. 6, our network experienced a disruption affecting some IP customers due to a configuration error. All are restored.

Original story: Spotty internet connections affected numerous people in the Seattle area and across the country on Monday morning.

Just after 10 a.m. PT, users across the Seattle region — including several GeekWire staffers — reported slow internet speeds. Some folks had a connection, but couldn’t access specific sites or apps.

I'm in Madison Valley and it is really, really slow right now.

???? Unfortunately, I️ speak for our entire building. Not a good sign. #Mondays

Yes, on the Eastside, too.

People outside of Washington were also reporting issues.

It doesn't work in Portland either. https://t.co/yyxjMMhaGw

So are other people having DNS issues with Comcast right now?

having issues in NJ too https://t.co/yy04v2uR3I

DownDetector.com noted widespread outages for Comcast customers across the country. Here’s a look at 11 a.m. PT: 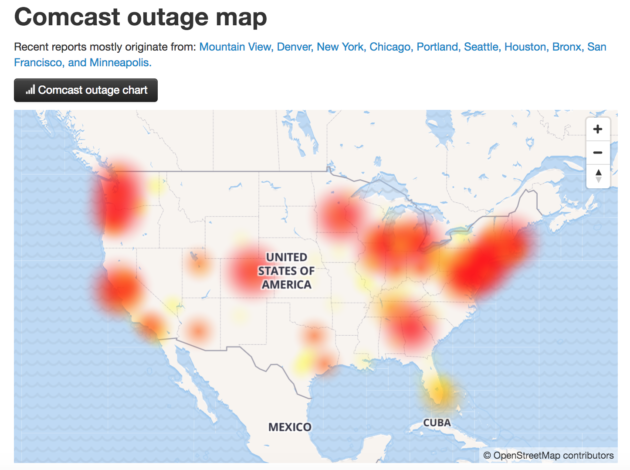 Comcast addressed the “issues” in a series of tweets — judging by the responses, and the #comcastoutage hashtag, people aren’t happy.

Some customers are having issues with their XFINITY Internet service. We apologize & appreciate your patience while we work to fix.

UPDATE: our teams continue to monitor an external network issue. We apologize for the inconvenience & will provide updates as we learn more.

Some people opted to use a VPN or Google’s public DNS as a way to regain full connection.

Having issues with Comcast? Change your DNS to Google's public DNS. It got my company back online. https://t.co/HUrZQD2tXi #comcastoutage

If you’re having trouble with the #comcastoutage, try connecting to a VPN. Worked for me.

A CenturyLink spokesperson said the only outage in Washington was a small phone line problem in Silverdale, Wash.

We’ve followed up with Comcast to learn more about the outages and will update this post when we hear back.

Some folks used the problem to talk about municipal broadband, one of the main topics debated by Seattle’s mayoral candidates.

Seattle's success comes from the internet. Yet in 2017 our connectivity is at the mercy of 2 corporations who don't want municipal broadband

Internet is broken for me, too, today. My city votes tomorrow on doing their own broadband. Comcast has been lobbying against. Karma? https://t.co/aflZtcBeDW