The International could be heading north.

Valve isn’t yet talking publicly about its plans, but several clues point to the video-game giant moving its huge Dota 2 esports tournament from its backyard in Seattle across the border to Vancouver, B.C.

The International is one of the largest esports events in the U.S., drawing sold-out crowds that pack KeyArena to watch the world’s top Dota 2 players compete for a $24.7 million prize pool. The tournament, which started in Germany six years ago, was previously held at Seattle’s Benaroya Hall before Valve moved it in 2014 to a larger venue at KeyArena.

Now the tournament may be heading to Canada, bringing with it tourism revenue and a growing fanbase that pays hundreds of dollars for tickets.

Initial clues popped up in October, when a stadium banner ad for The International ran at Rogers Arena in Vancouver during a TSN hockey report.

This week, when asked about the availability of tickets for The International in 2018, a KeyArena ticketing agent said the event wouldn’t be returning to KeyArena next year due to the pending renovation, which is set to begin in the fall of 2018.

Earlier this year, Valve co-founder Gabe Newell said The International could be moved out of the country as a result of President Donald Trump’s immigration crackdown. Competing teams come to Seattle for The International from all over the world; the same goes for spectators.

Valve, based in Bellevue, Wash., didn’t respond to multiple requests for comment. The City of Seattle and a representative for Seattle Center declined to comment, referring our inquiry to a Valve representative. 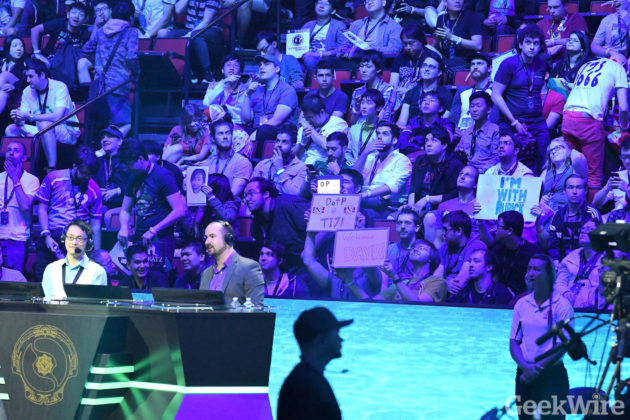 If Valve is indeed moving the event to Vancouver, then Rogers Arena — home of the NHL’s Vancouver Canucks — would be a logical place to hold The International, with a capacity of 18,630.

KeyArena, which holds about 17,000, has hosted the event for the past four years. But the city recently approved a new $660 million deal to renovate KeyArena, with construction set to begin in October 2018.

The International is typically held in the summer, though it’s possible that KeyArena renovation leader Oak View Group wants to close down the venue before it officially begins the reconstruction. 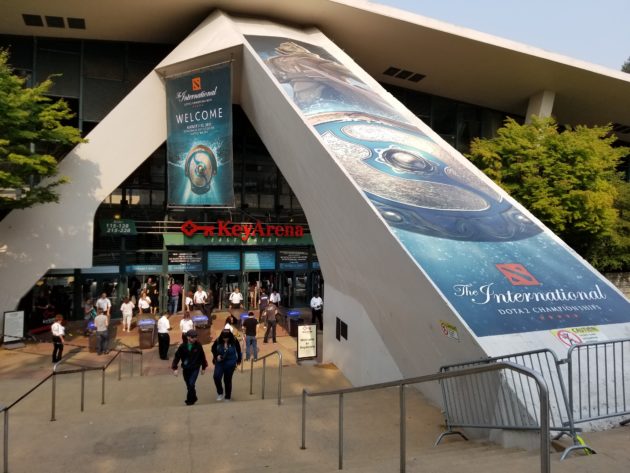 A quick walk around The International this year showed how people travel from all over the world, from Minnesota to Singapore, just to attend the event. Tickets sell out in minutes. It’s a big deal for the city, bringing additional tourism money to the urban core. It’s part of a still-nascent esports industry that is growing by the day.

“I came to see my favorite team, Evil Geniuses, play and win,” Zac Mishler, who hails from Bloomington, Minn., told GeekWire in August.

Those not familiar with esports may wonder why people travel from halfway across the globe and pay big bucks to watch other people play video games. But for some Dota 2 fans, attending The International can be a life-changing experience. That’s what happened to Kyra Slovacek, who came back to Seattle from her hometown of Boulder, Colo., after checking out the event last year for the first time.

“It was the best trip I ever went on,” she told GeekWire. “I really had no idea how big the Dota 2 community was until I came to The International and saw the line wrapped all around Seattle Center and sat in the arena. It was unbelievable.”

Spectators watch the professionals battle out at center court, where the teams compete in two pits with glass windows. The International has a sports-like feel, from the raucous crowd to the broadcast booths to the press rows to the festivities outside KeyArena. Valve streams the live action to four huge screens inside KeyArena, and any time there’s a heated battle, the crowd roars — the decibel level certainly matches, if not surpasses, what you’ll experience at any other sporting event.

Speaking at the GeekWire Sports Tech Summit this past June, Oak View Group CEO Tim Leiweke said that esports is on the agenda for the redeveloped KeyArena, which could also house an NHL team. He expects to host 20 esports events per year at the arena once the reconstruction is complete by October 2020.

“Do I think 18,000 people come into each and every one of those 20 nights to watch people play games?” Leiweke said in June. “I’m not sure it’ll be 20,000, but look, if you do 5,000-to-8,000, and that keeps your building busy, and those are 20 nights that you can schedule around your anchor tenant and your concert business, I think it’s a fantastic addition completely driven by technology.”