EVERETT, Wash. — Today it looks like an eight-foot-long section of culvert pipe, but in just a couple of months, the carbon-fiber cylinder sitting on OceanGate’s shop floor will serve as the heart of a five-person submersible that’s destined to visit the Titanic, the world’s most famous shipwreck.

The Cyclops 2 submersible and its future mission represent the culmination of an eight-year-old dream for Stockton Rush, the Everett-based company’s co-founder and CEO.

“The whole project from Day One was to go deep. … Three years ago, it became pretty clear that the real market opportunity was the Titanic,” Rush told GeekWire on Friday during a company open house.

This summer, Rush and his team reached a milestone when they attached two titanium rings to the ends of the central cylinder, beginning the assembly process for Cyclops 2. The next steps include bolting titanium domes onto the rings, installing a clear acrylic viewport and outfitting the pressure vessel inside and out.

The process was prototyped with the construction of Cyclops 1, OceanGate’s current flagship, which has been employed on expeditions including last year’s visit to the wreck of the Andrea Doria.

Cyclops 1 is designed to dive to depths of 500 meters, or 1,640 feet. Cyclops 2 will be built even stronger, to handle the extreme pressures 13,000 feet (4,000 meters) beneath the ocean’s surface. It will arguably be the world’s most capable crewed submersible in private hands.

OceanGate’s schedule calls for completing construction in time for initial underwater tests off the coast of Washington state by the end of the year, followed by deep-water validation dives off the coast of California. The first visits to the Titanic, 380 nautical miles off the coast of Newfoundland, are due to take place next June. 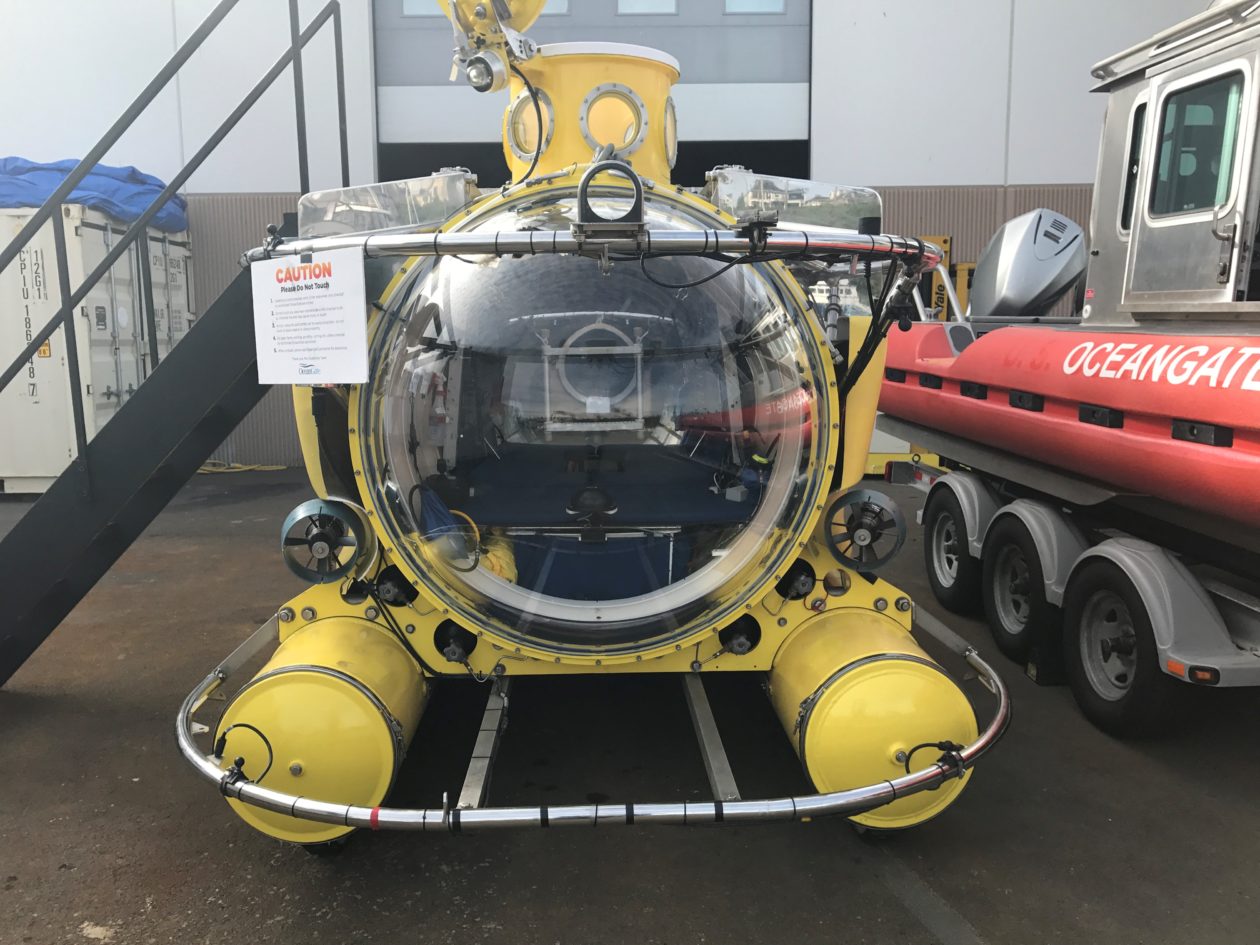 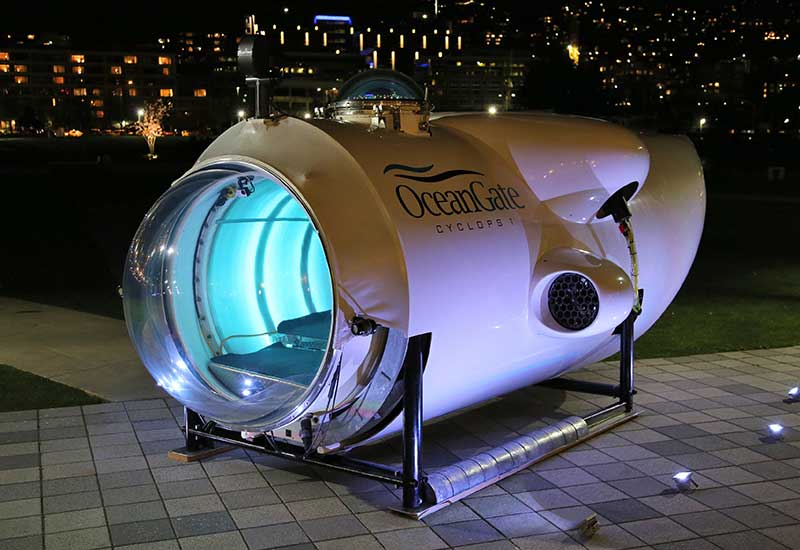 The Cyclops 1 submersible can take a crew of five down 1,640 feet. (OceanGate Photo) 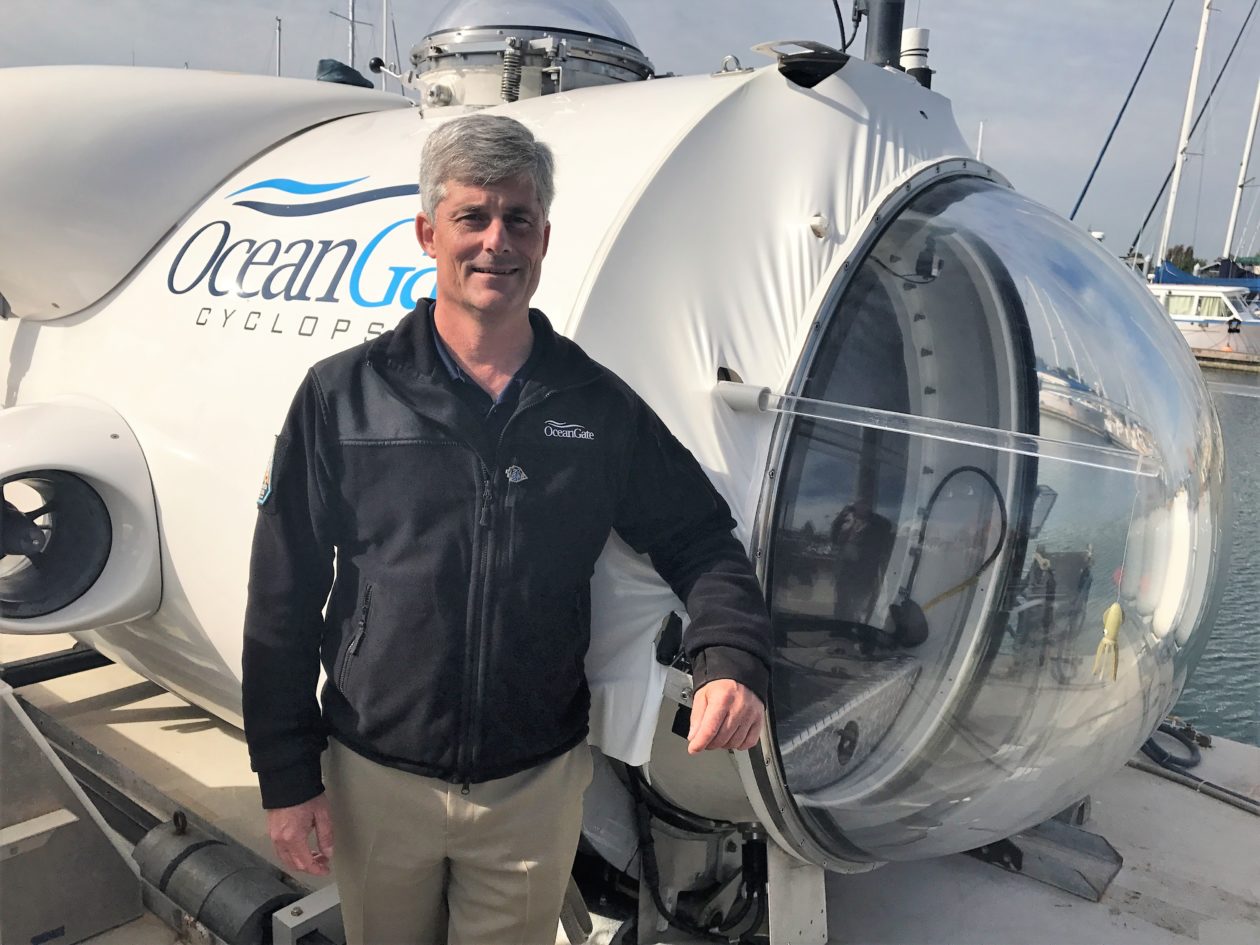 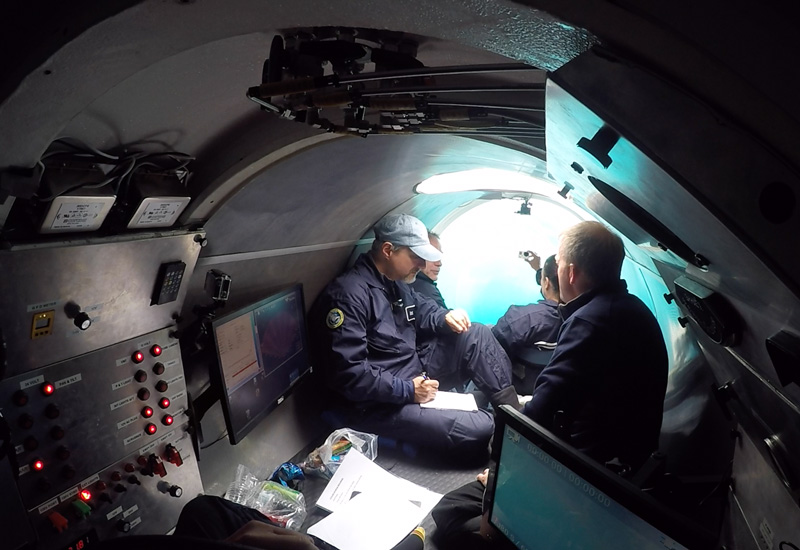 Cyclops 1’s crew studies the wreck of the Andrea Doria in 2016. (OceanGate Photo) 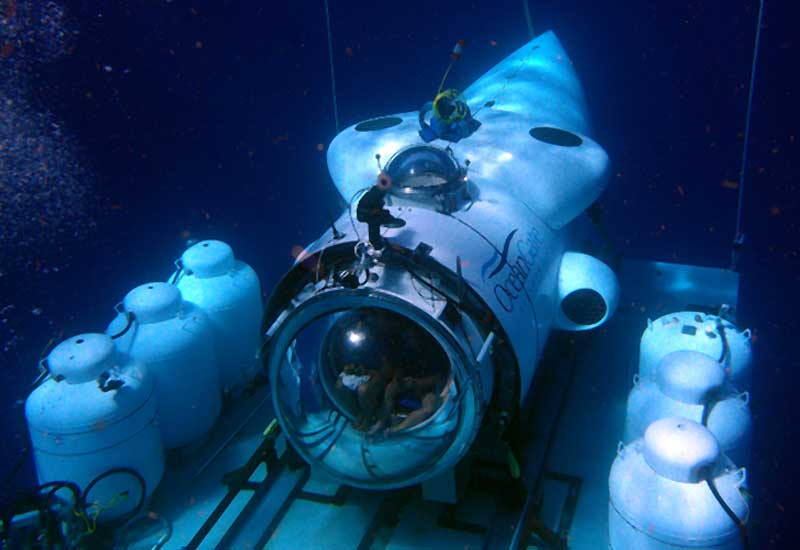 Cyclops 1 gets set to lift off from its launch and retrieval system. (OceanGate Illustration) 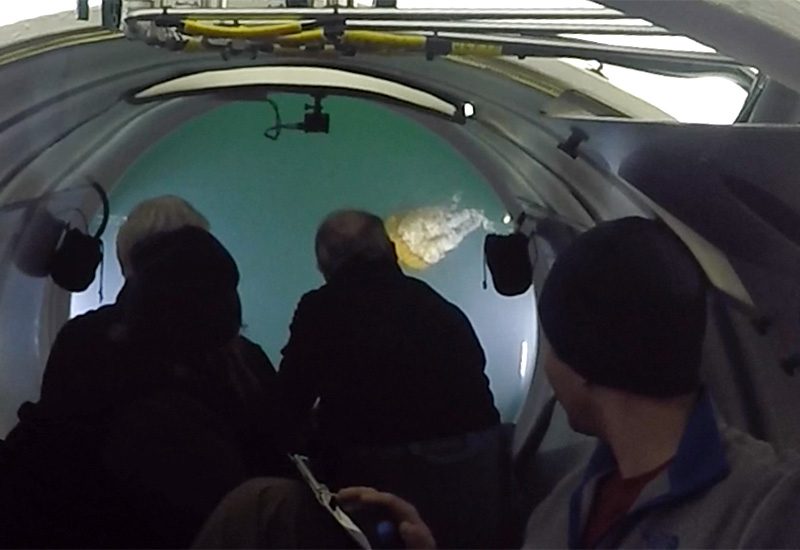 Crew members watch a jellyfish during an expedition in the Greater Farallones National Marine Sanctuary off the California coast. (OceanGate Photo) 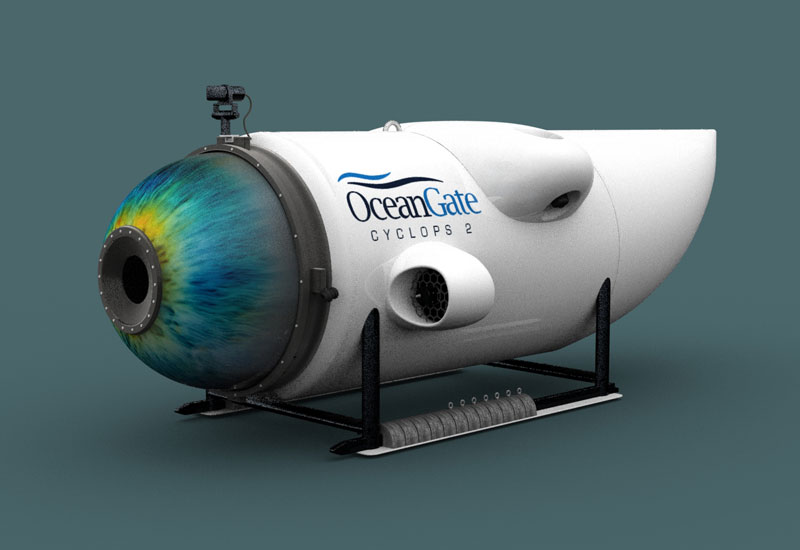 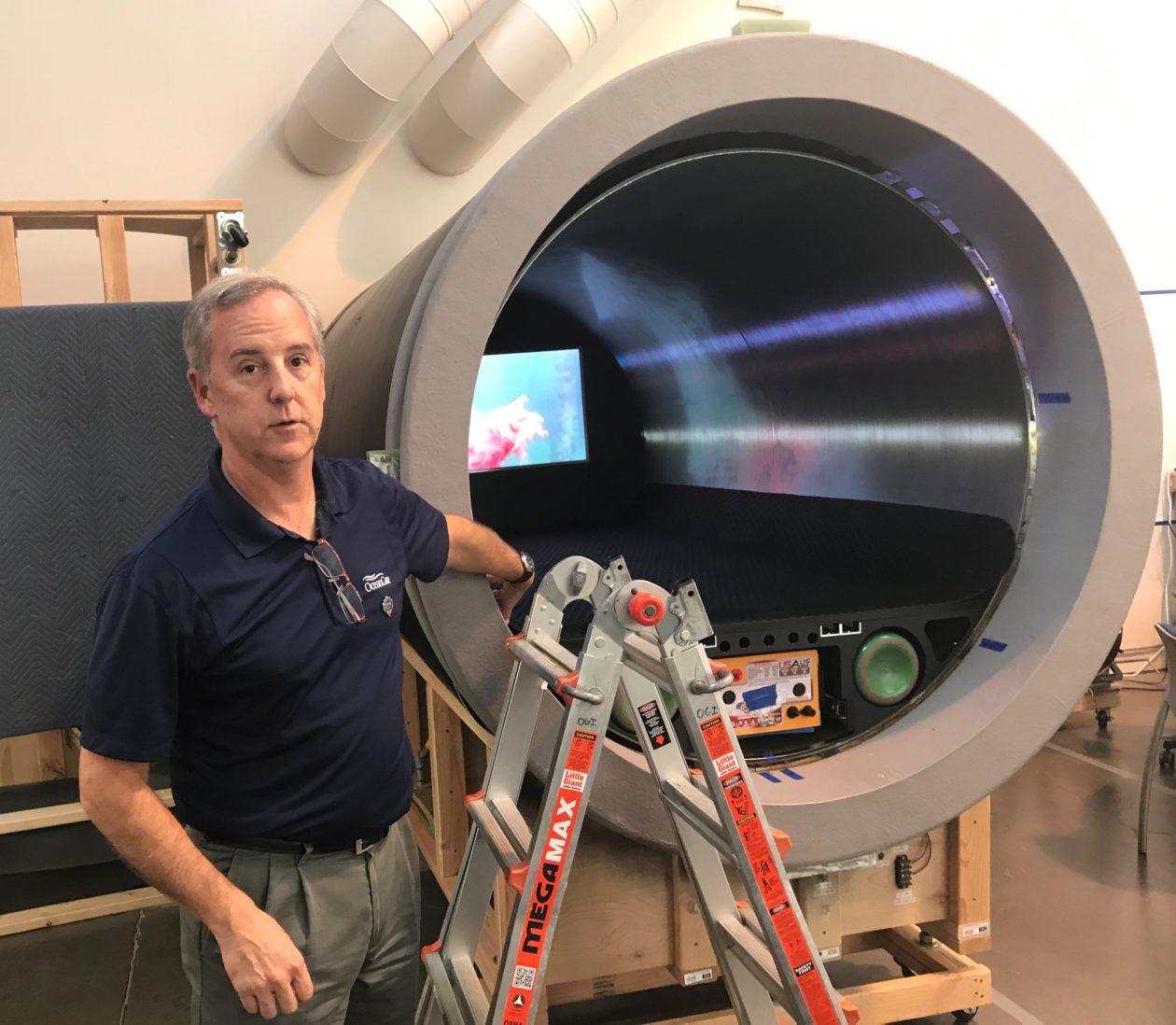 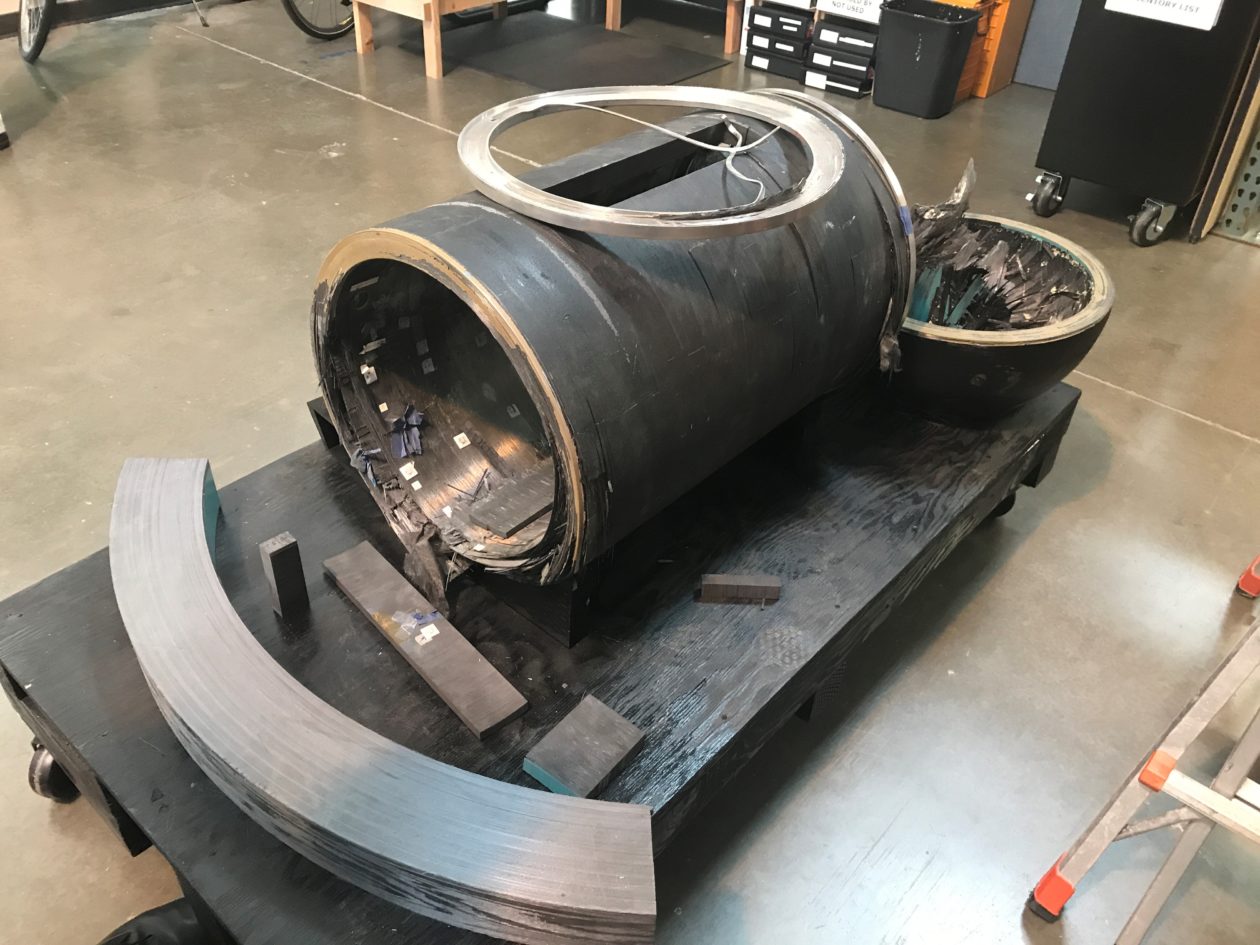 OceanGate built a subscale model of the carbon-composite Cyclops 2 central cylinder and subjected it to pressure tests several times. The last test amped up the pressure until the vessel imploded. (GeekWire Photo / Alan Boyle) 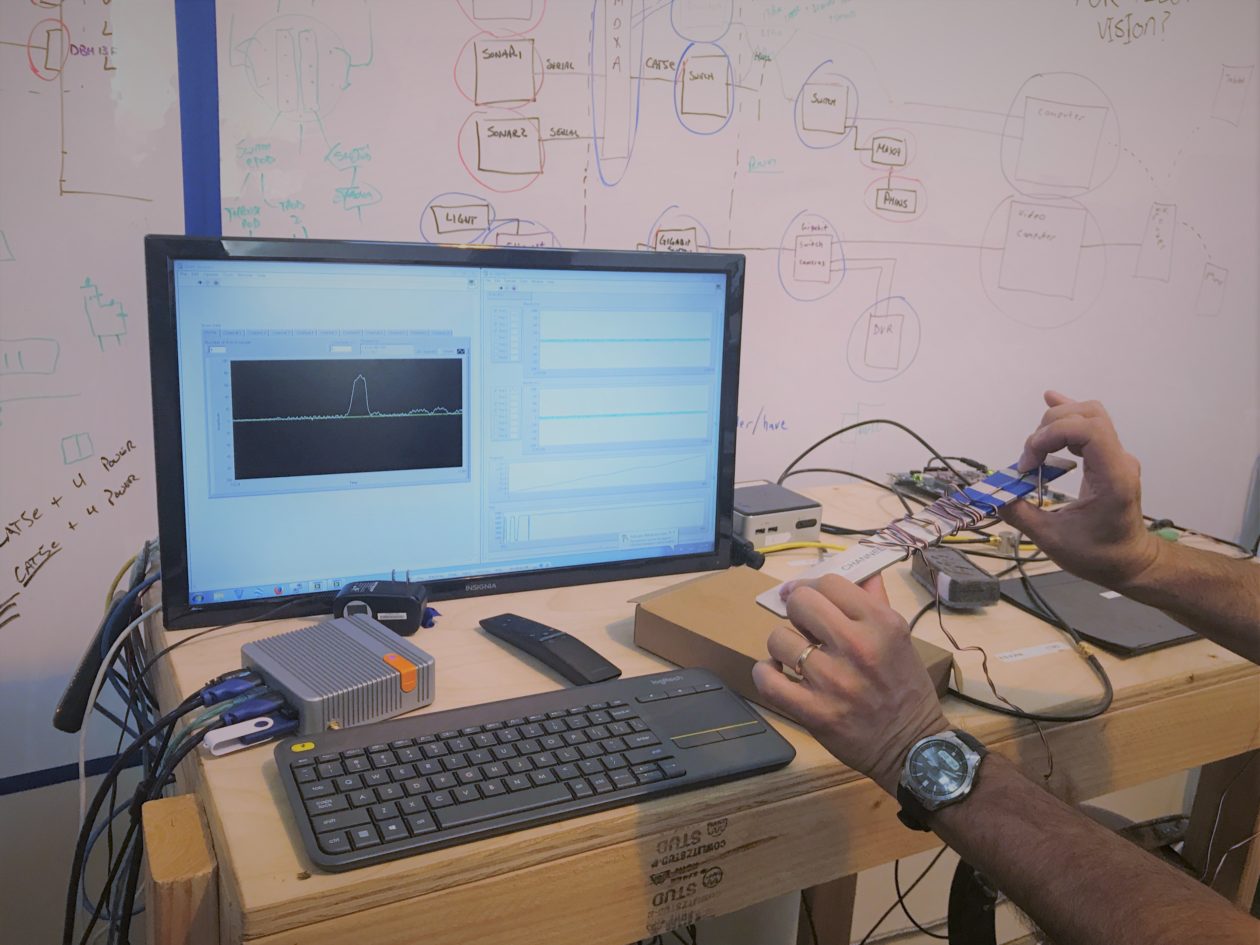 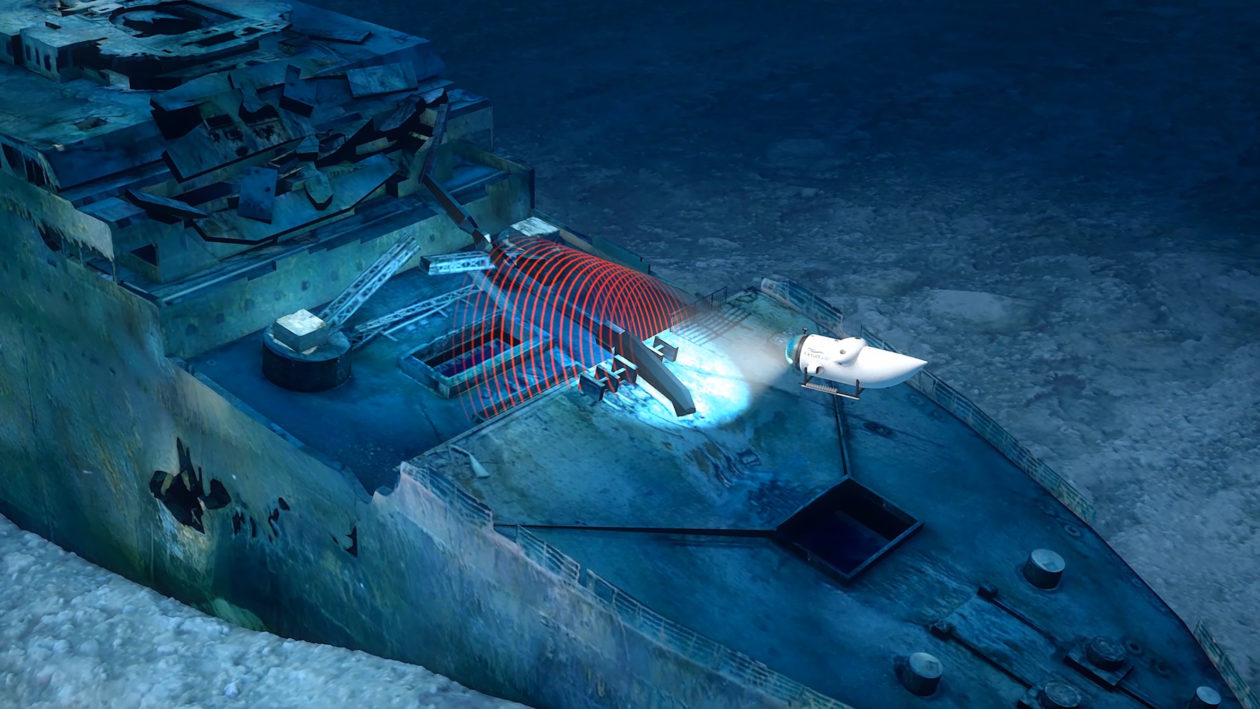 Cyclops 2 takes advantage of innovations in materials science as well as traditional (and not-so-traditional) marine engineering. The key piece is the cylindrical pressure vessel, which was spun from carbon fiber and will be outfitted with strain gauges and acoustic transducers for underwater tests. In preparation for assembly, a subscale model of the sub was tested repeatedly, under pressure conditions that were eventually amped up so high that the vessel imploded.

Cyclops 1 is steered by a Sony PlayStation video-game controller, and Cyclops 2 is expected to make use of similar off-the-shelf technology. OceanGate’s president, Joel Perry, got a kick out of reading that the U.S. Navy was installing Microsoft Xbox controllers on some of its submarines. “We did it first,” he said.

The full-scale cylinder sitting on OceanGate’s shop floor will be outfitted in place as the parts arrive. A webcam already has been set up to capture a time-lapse video of construction over the weeks ahead.

At the same time, OceanGate and its partners are reviewing the arrangements for the Titanic dives ahead. As anyone who’s seen the film “Titanic” knows, the luxury liner struck an iceberg in the North Atlantic during its maiden voyage in 1912. The ship sank within hours, resulting in the loss of more than 1,500 passengers and crew. Only 706 survived.

For decades the Titanic lay undisturbed on the ocean floor, at a depth of 13,000 feet, but a deep-sea expedition relocated the wreck in 1985. Since then, scientists have documented the site during a series of crewed and robotic dives. Tourists have visited as well.

Next summer’s expedition will include researchers from the Woods Hole Oceanographic Institution as well as other passengers who are paying more than $100,000 to be part of the adventure. During a roughly six-week-long research season, the passengers will take turns being flown out on a helicopter for weeklong stays on the Island Crown, a Norwegian-flagged supply ship that will serve as the expedition’s oceangoing base of operations.

OceanGate shies away from calling any of its passengers “tourists.”

“We’re giving our crew members, our mission specialists, a chance to be in the control room, communicate with the sub, do tracking and analyze data — do all of those parts that are important for us, and valuable for them,” Perry said. “It’s a win-win.”

He said the appeal of the Titanic expedition has a lot in common with other extreme adventures — for example, taking a suborbital space ride on Virgin Galactic’s SpaceShipTwo rocket plane.

“The first nine people [to sign up] were all Virgin Galactic clients,” Perry said.

He said the spots for 2018 have been filled, although some customers are dropping out and others are taking their place as part of the travel business’ typical churn.

On video and in virtual reality

OceanGate is also vetting potential partners for the media extravaganzas to come. Perry said the company has been contacted by 40 different studios, seeking to make the exclusive deal for a documentary about the expedition.

A show about the Titanic survey is certain to pop up on one of the big networks, such as the BBC, National Geographic and/or the Discovery Channel. Perry said OceanGate expects to make its choices for media partnerships sometime in the next few weeks, so that the run-up to the project’s climax can be recorded from its early stages.

Rush said it’s important that the documentary project focuses on the science and engineering rather than the personalities.

“We don’t want to do ‘Deadliest Catch: Submarine,'” he said. “There’s enough of a story about going to the Titanic and answering the question, ‘How long will it be around?'”

In addition to capturing video for a documentary, OceanGate plans to acquire high-definition imagery that can be presented as a virtual-reality experience. The VR angle will be a big part of the company’s media plans. Rush said companies such as Microsoft, Apple and Intel may be in the mix.

Rush envisions a setup that would let users put on a virtual-reality device and navigate their way through the Titanic’s debris field, zooming in on artifacts and annotating their discoveries. Users could return to the VR world after each year’s expedition to find out what’s new — and find out what happened to their finds.

“There’s a certain gamification to exploring the debris field,” he said.

“Titanic: The VR Experience”? Coming to a headset near you? Stay tuned…