Just a few blocks away from the bustling tech hub that is Amazon’s Seattle headquarters, dozens of people who represent what Seattle used to be and is today are waiting to get into a “secret show” on a Thursday night at a small, unassuming brick building.

Friends from the Sub Pop Records glory days and the local arts and cultural scene mix it up with millennial tech professionals and a select few fans, about 120 people in total. All of them occasionally duck and dodge a giant floating camera capturing the show for a livestream.

This was the scene Thursday night inside CreativeLive‘s Seattle studio, as its co-founder and CEO Chase Jarvis got ready to interview James Mercer, the shy and unassuming frontman for The Shins and the idea man behind a new artistic app. Following the wide-ranging, hour-long interview, Mercer pulled out his guitar and played an acoustic set that mixed up his band’s greatest hits with some stuff off a new album.

This “secret show,” as it was billed, was part of a regular program put together by Jarvis called Chase Jarvis Live. The show dates back to 2010, and past guests include Mark Cuban, Richard Branson, Sir-Mix-A-Lot and many others. The shows are livestreamed, or in some cases podcasted, hence the not-so-secret nature of the secret show.

Jarvis, a renowned photographer in his own right, told me afterward that the shows are meant to inspire people all over the world. He asks his guests about times where they’ve hit a wall, and how they overcame struggles, so that someone else pursuing a dream can be motivated to stay on their path.

“It’s about inspiration and realizing that folks like James Mercer have the same demons you and I have, so it was really designed to unlock that creative potential inside of all of us and let us know that it’s hard for everybody,” Jarvis said of his show.

The shows came under the umbrella of CreativeLive only about 18 months ago, but it was a natural fit. With offices in Seattle and San Francisco, CreativeLive offers video classes in a variety of areas like video, photography, music and others. Many of the lessons are streamed from the very same Seattle studio where Jarvis and Mercer held court Thursday night. 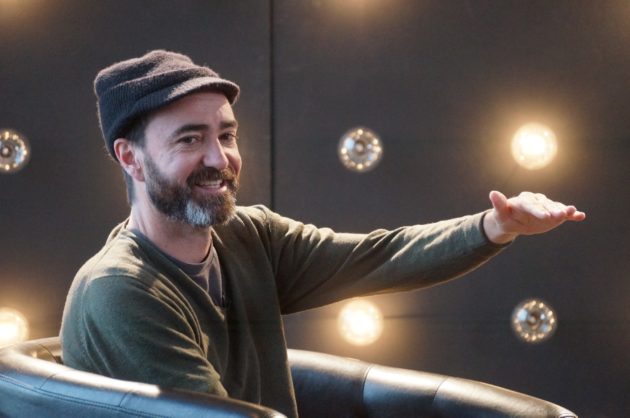 Mercer, sporting a green sweater, brown beanie and salt-and-pepper beard — exactly what you’d expect from a Portlander — talked about growing up in New Mexico and getting his start in music. Once a struggling songwriter, Mercer’s band The Shins, which got its start at Sub Pop, is world famous, and he is part of another successful group, Broken Bells.

Shyness was one of Mercer’s biggest hurdles to overcome. He came out of his shell, thanks to the help of a former bandmate who encouraged him to get out and play his songs for people. At that point, Mercer had the drive to prove himself.

Technology came up several times during the talk. For example, The Shins recorded their entire debut album on a bootleg program on a HP computer. 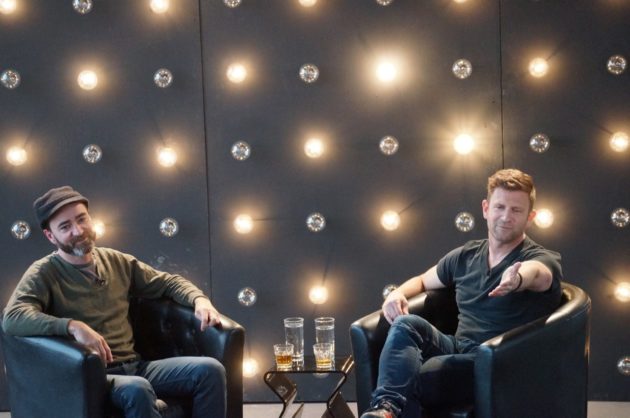 Mercer also discussed his new photo collage app, Pasted, which is only available on iOS. That last fact severely disappointed my wife, an avid Shins fan, Instagrammer and Android user who attended the show with me.

Mercer demonstrated the app during his talk by beaming his iPhone screen, complete with about 5,700 unread emails, onto a big TV. The app uses facial recognition technology to maintain important aspects of pictures and then cuts them up into interesting shapes that can be moved around to make a collage. 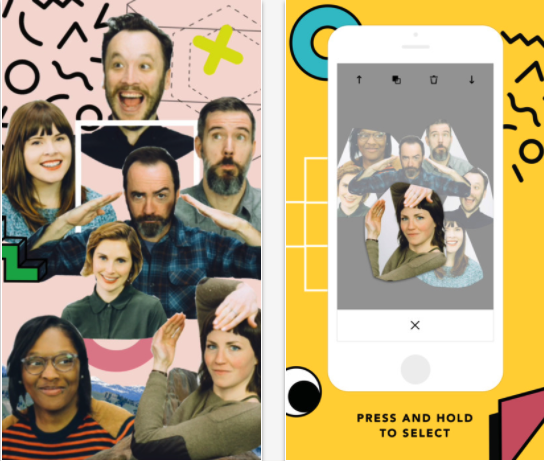 Mercer said he got the inspiration for the app from a restaurant in Hawaii with walls covered in photo collages. He wanted to build similar collages digitally, but he couldn’t find an app to do it, so he decided to pursue it himself. He teamed up with an old friend, a drummer who had become a developer, and released the app last month.

Mercer likened building an app with recording a new album or performing at a show, painting his latest venture as a continuation of his art.

“You’re really just taking what you are doing in your bedroom or on stage,” he said, “and turning it into something people can experience from afar.”