One of the world’s fastest growing enterprise software companies today opened the doors to its new home in the Seattle area.

San Francisco-based cloud services giant Salesforce on Wednesday officially cut the ribbon at its new engineering hub in Bellevue, Wash., where it expects to double its 250-employee workforce over the next year.

Top executives and city leaders gathered at the new 19-story 929 Office Tower in downtown Bellevue, where Salesforce now occupies three floors in a 70,000 square-foot office that features open common areas, big windows, natural light, views of the Cascade Range, and even a “mindfulness zone” where employees can meditate.

“This will be one of company’s largest engineering and innovation hubs,” said Elizabeth Pinkham, EVP of Real Estate for Salesforce. “This is a big deal.” 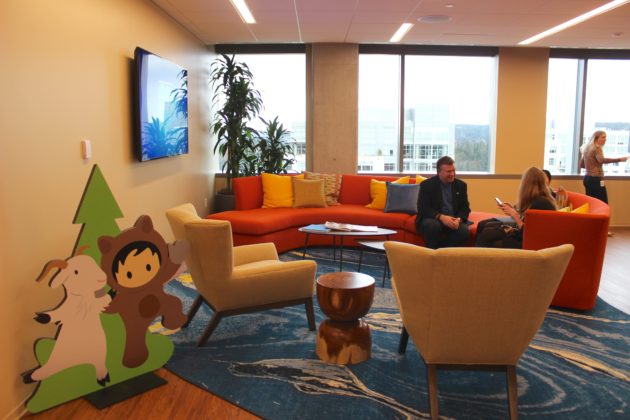 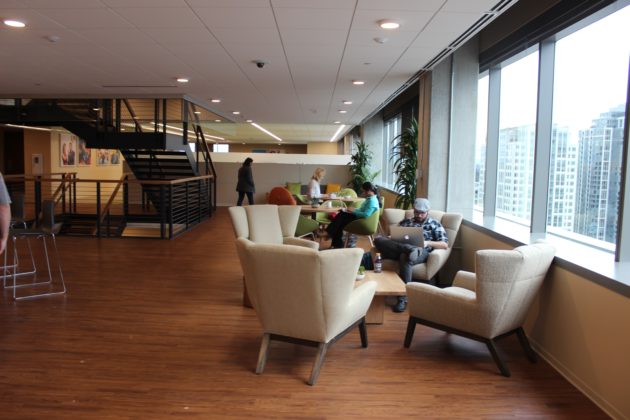 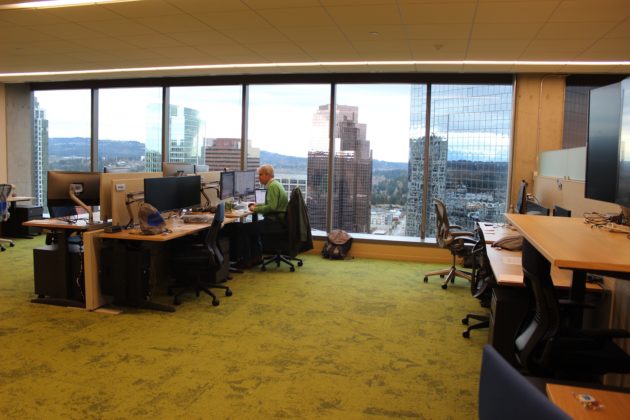 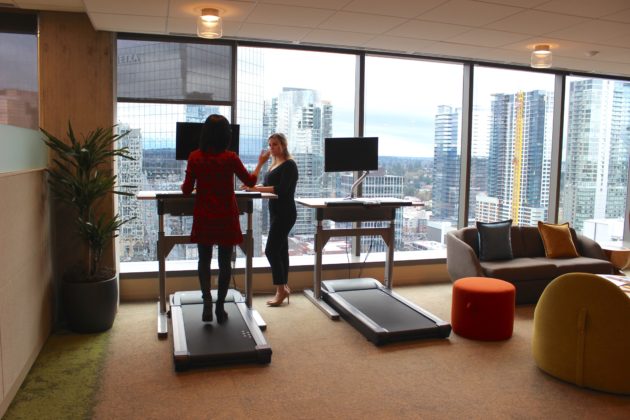 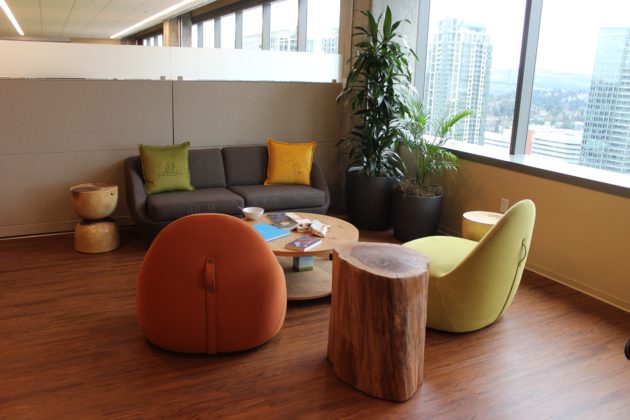 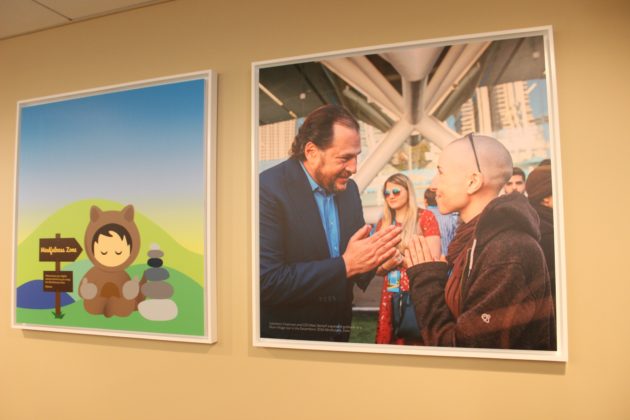 Bellevue Mayor John Stokes spoke at the ceremony and, like many employees, donned a Hawaiian lei — a symbol of the company’s “Ohana” family-like culture. He thanked Salesforce for planting its flag in Bellevue, where there are several other tech giants like Concur and T-Mobile — and hundreds of startups — not to mention companies such as Microsoft, Facebook, Google, and more that have offices in the adjacent cities of Redmond and Kirkland.

“Salesforce is a vital part of our growing list of national and international technology companies that choose Bellevue for their place of business,” Stokes said. 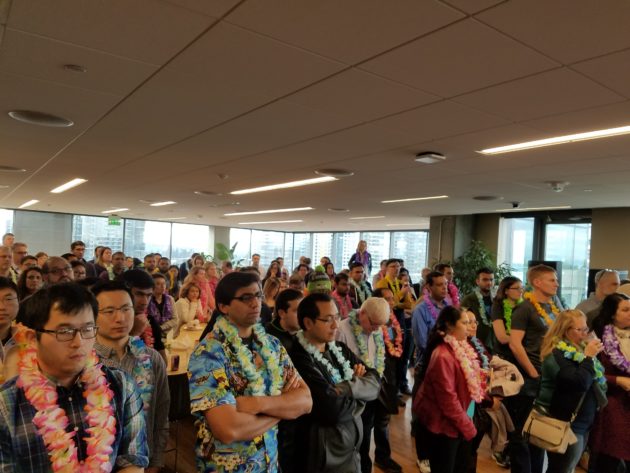 Salesforce had been growing its workforce around the Seattle region over the past several years at a few different offices. But now all employees, a majority of which are engineers, will work out of the new Bellevue location.

“We’ve been bursting at the seams with our existing space because there is such great talent in the area,” said Jim Walsh, Salesforce senior vice president of infrastructure engineering who is the company’s Seattle-area leader. “We wanted to get all our employees working in one space, with some room to expand in the future.”

Salesforce co-founder Parker Harris told GeekWire that the main reason for expanding in the Seattle area is the quality of talent in the region. Salesforce is one of more than 80 out-of-town companies that have opened engineering centers in the region. Microsoft and Amazon, two companies that Salesforce both partners with and competes against, are also headquartered in the area.

“The people we already have there are just incredible,” Harris said. “We see no shortage of new hires that we can go get. We’re making it a secondary hub for us where we can grow our engineering talent.”

Harris said the main focus for the Bellevue office will be on Einstein, the company’s artificial intelligence platform. He said Salesforce is looking to hire more data scientists to build out Einstein’s functionality. 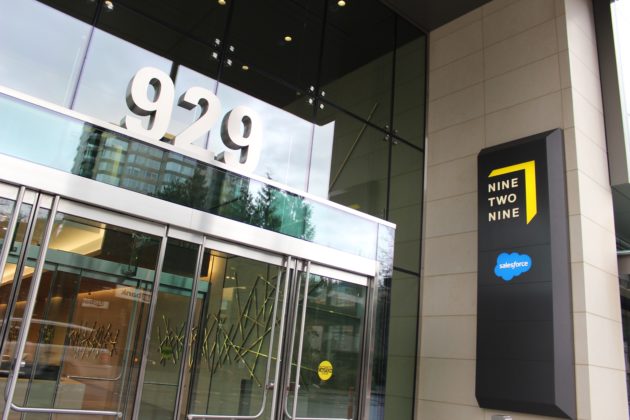 The office itself carries forward Salesforce’s “Ohana” culture, which stresses the value of inclusion and family that extends not just to the employees but also to the company’s community of customers and partners. The three social lounges — one on each floor — are places for employees to hang out and host meetings with people from outside of Salesforce.

“It’s almost like a public cafe where we can bring in this extended Ohana family,” Pinkham said.

Walsh added that “we want people to accidentally run into each other and collaborate, not just be heads down.” 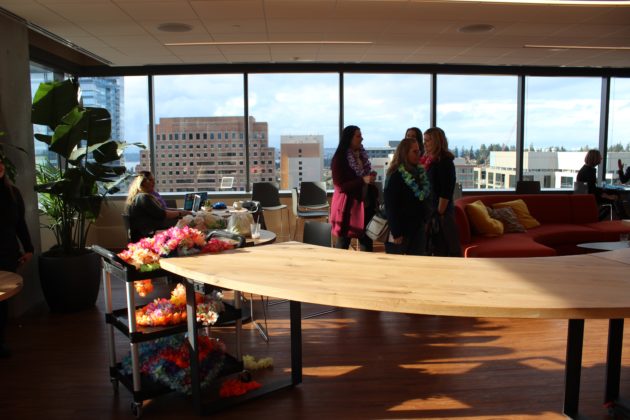 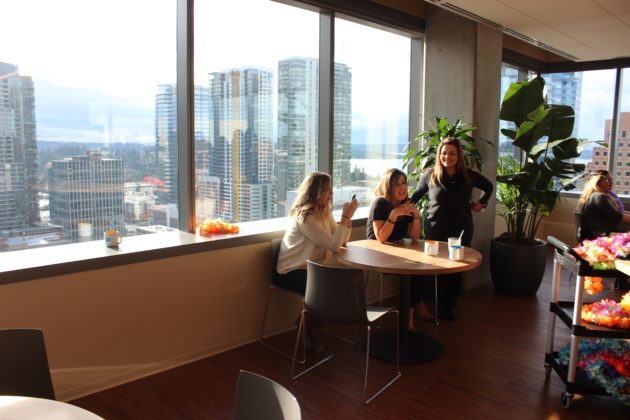 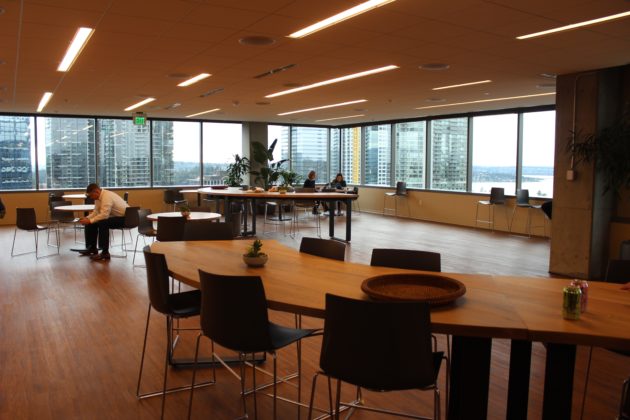 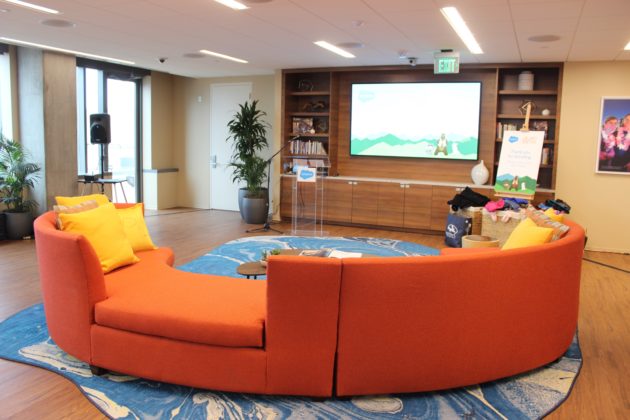 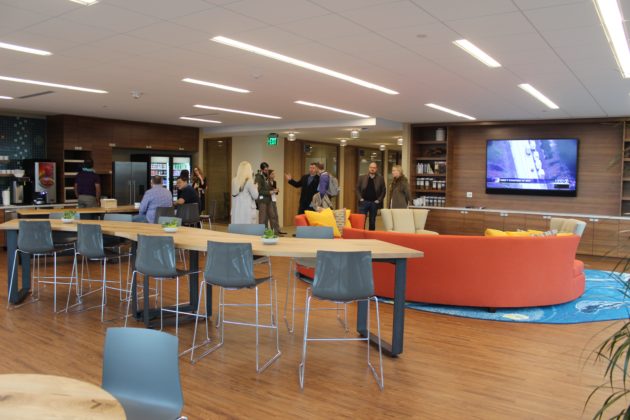 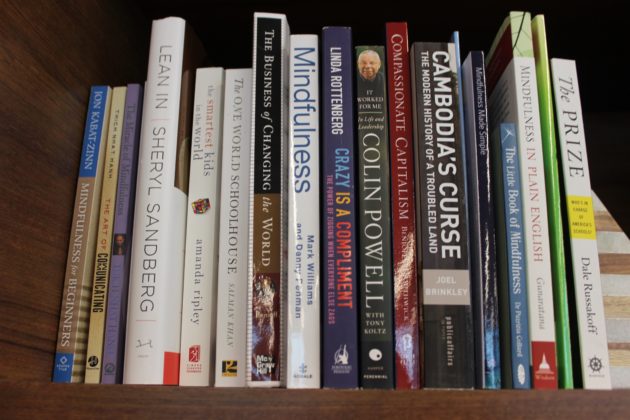 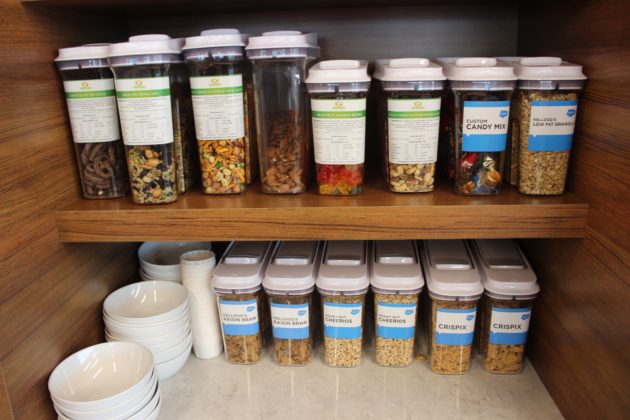 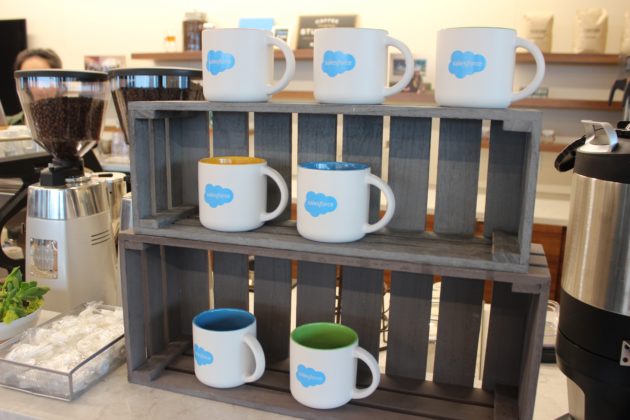 The workspaces are set up in “bullpens,” which allow different engineering groups to collaborate but also work independently at individual standing desks. They are purposefully set up next to the windows, which offer nice views of Bellevue and the surrounding mountains. There are no large private offices for executives. 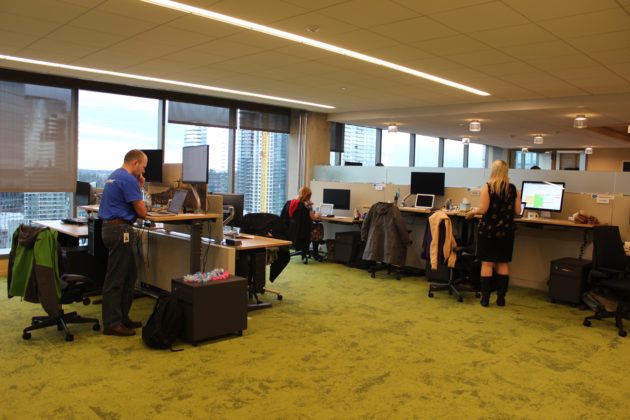 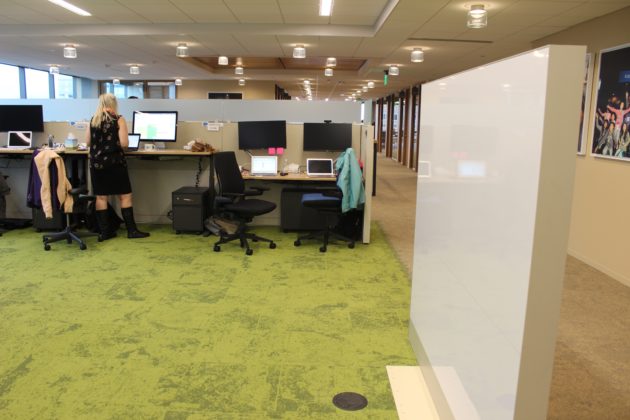 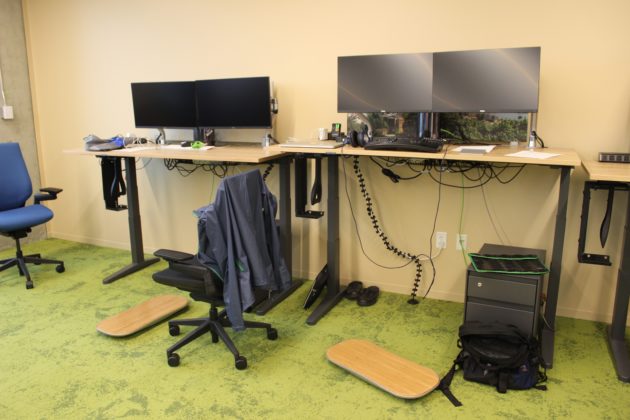 There are also several smaller rooms for meetings or for employees who need some private time. 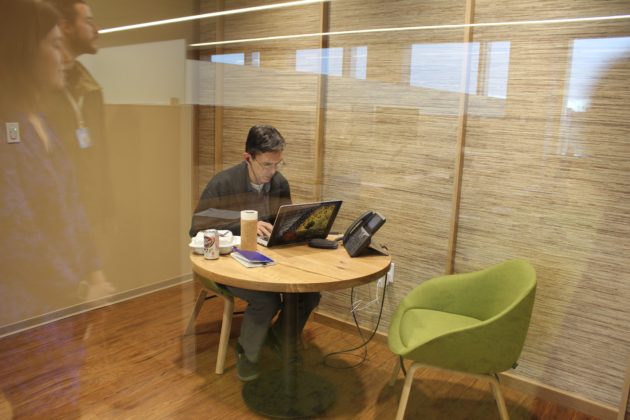 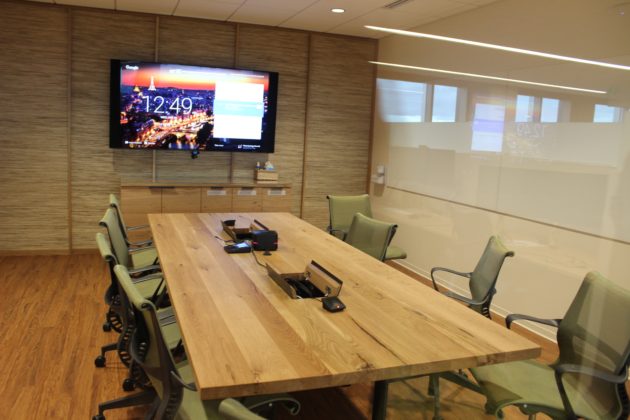 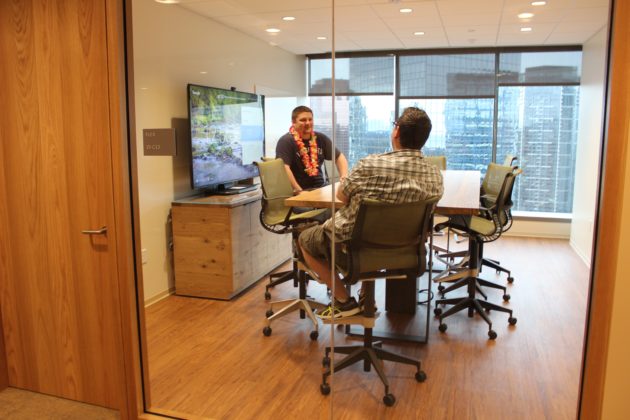 Each floor also has a “Mindfulness Zone,” which is a small area tucked in the corner that offers employees a chance to ditch their devices and have quiet time. Salesforce, which invited 50 monks to its Dreamforce conference last year, is committed to providing employees time for themselves to relax and refocus. The company is now building these zones in every office around the globe. 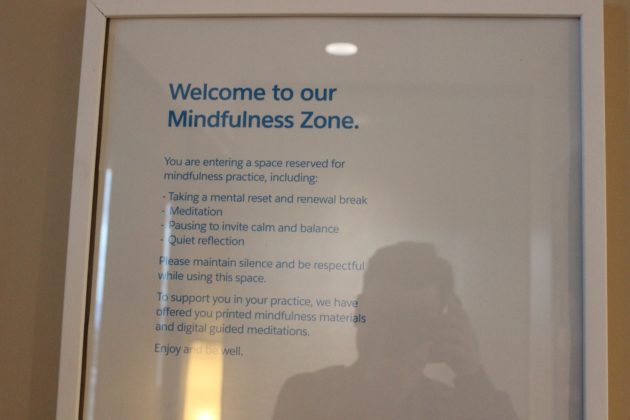 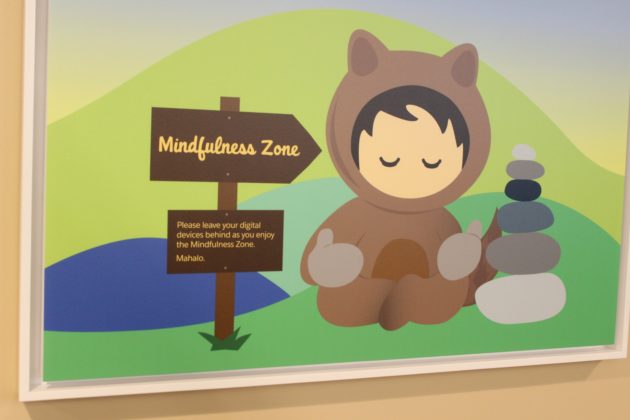 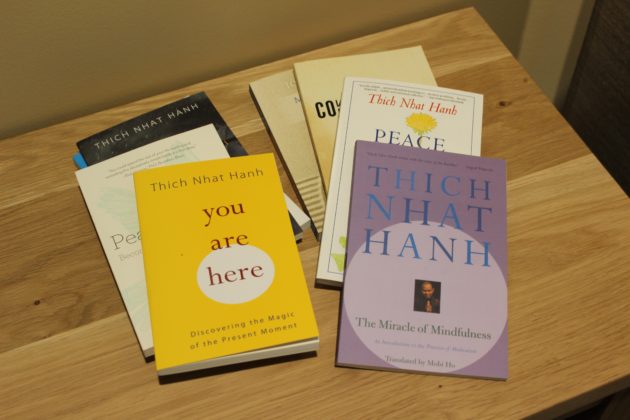 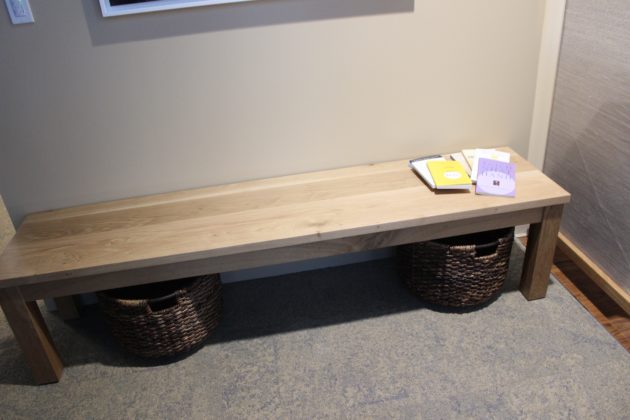 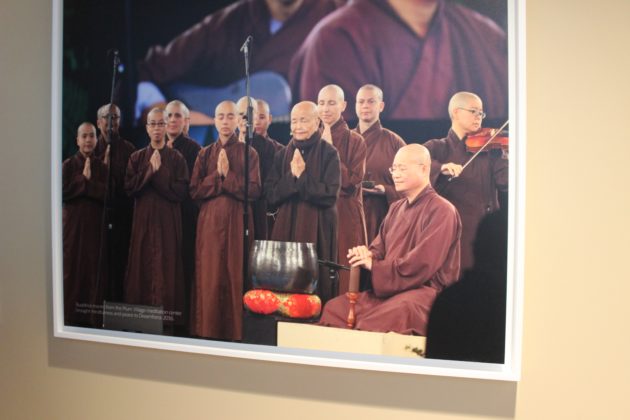 As part of today’s grand opening, Salesforce also committed to volunteer more than 7,500 hours to local schools and organizations by the end of 2017. It is partnering with local non-profit Mary’s Place to provide clothing for homeless women and their families.

Salesforce, which has 150,000 customers, reported revenue of $2.14 billion in the most recent quarter, up 25 percent year-over-year. Founded in 1999, the company is now valued at $52 billion and employs more than 19,000 people worldwide. Its stock is up nearly 6 percent in the past year.

“I’m delighted to announce that we expect to deliver our first $10-billion year during our fiscal year 2018, which puts us well on the path to reach $20 billion faster than any other enterprise software company,” said Marc Benioff, chairman and CEO of Salesforce, in a statement this past November.

We’ll have a video tour of the new office and more details about the space later on GeekWire, so stay tuned for that.