Photographers and passersby who have been captivated by the spheres taking shape on Amazon’s campus north of downtown Seattle now have an official Instagram account to follow for more shots of the unique structures.

Under the name @seattlespheres, the account went live on Monday and so far features nine posts and has attracted 277 followers. The description says the three glass domes, located between Sixth and Seventh Avenues at Lenora Street, will be “blossoming” in early 2018.

The first image posted on the account called The Spheres, located between the Doppler and Day 1 towers, “the centerpiece of Amazon’s urban campus.” 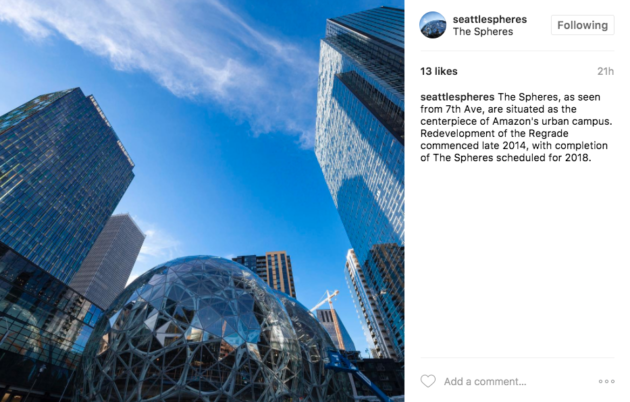 Additional images capture plant life as well as views looking up through the glass panels that make up the orbs’ exterior. “The Spheres combine lush living plants with functional working spaces,” one caption reads.

Previous stories have reported on the number and variety of plants that will be housed in The Spheres, and that a full-time horticulturalist will be employed by Amazon to care for the species.

Seattle-based NBBJ is the architecture and design firm behind The Spheres and has said it wants them to be on par with the Space Needle as a signature visual element in Seattle. Amazon is clearly proud enough of what it is building to provide this exclusive look inside.

Photographs of the structures have been a must for anyone who wanders through the Denny Triangle area of Seattle where construction has been a near-constant part of daily life for years. Amazon CEO Jeff Bezos was even attracted to an image shared by photographer Melissa Anne McClain, shot during a snow storm in December.