With the lights dimmed and music bumping, a sold-out crowd at Key Arena roared on Saturday evening as tennis legend Roger Federer emerged from the smoke and onto the court for the first time ever in Seattle. The raucous cheers continued as his most unlikely of playing partners — Bill Gates — trotted in just afterward, introduced on the loudspeaker as “the Emerald City phenom known for his world wide web of skill.” The Microsoft co-founder wore a huge smile as he saluted his hometown fans with one hand raised and for a moment nearly burned himself as he passed by a flamethrower.

Yes, this was going to be one helluva night.

And indeed it was, with the greatest tennis player of all time teaming up with the Microsoft co-founder to host a charity event in front of 16,000 people that raised more than $2 million for the Roger Federer Foundation. 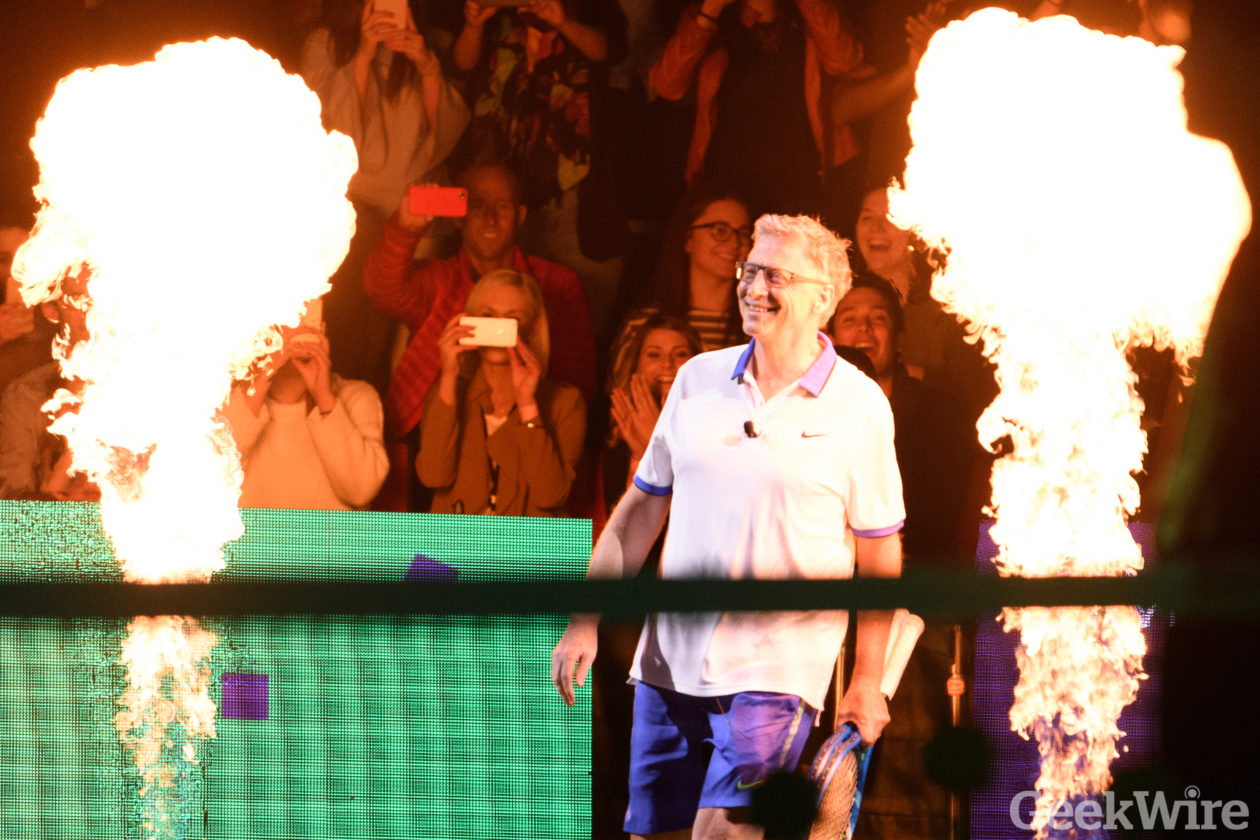 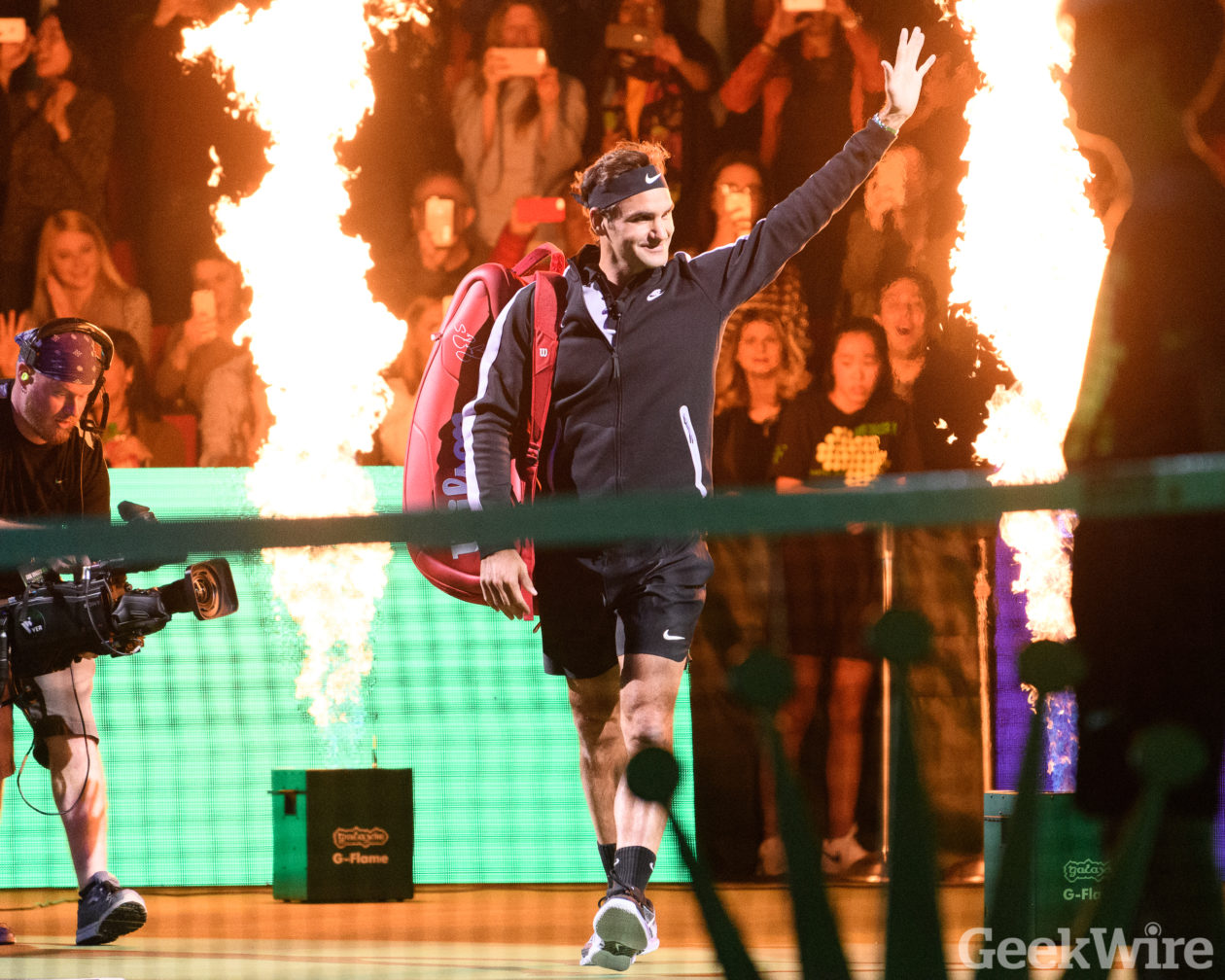 Federer, an 18-time Grand Slam champion, put on quite a show for his Seattle debut with the help of Gates, Pearl Jam guitarist Mike McCready, and American tennis star John Isner, who all came together to support Federer’s foundation and its fourth “Match for Africa” day. 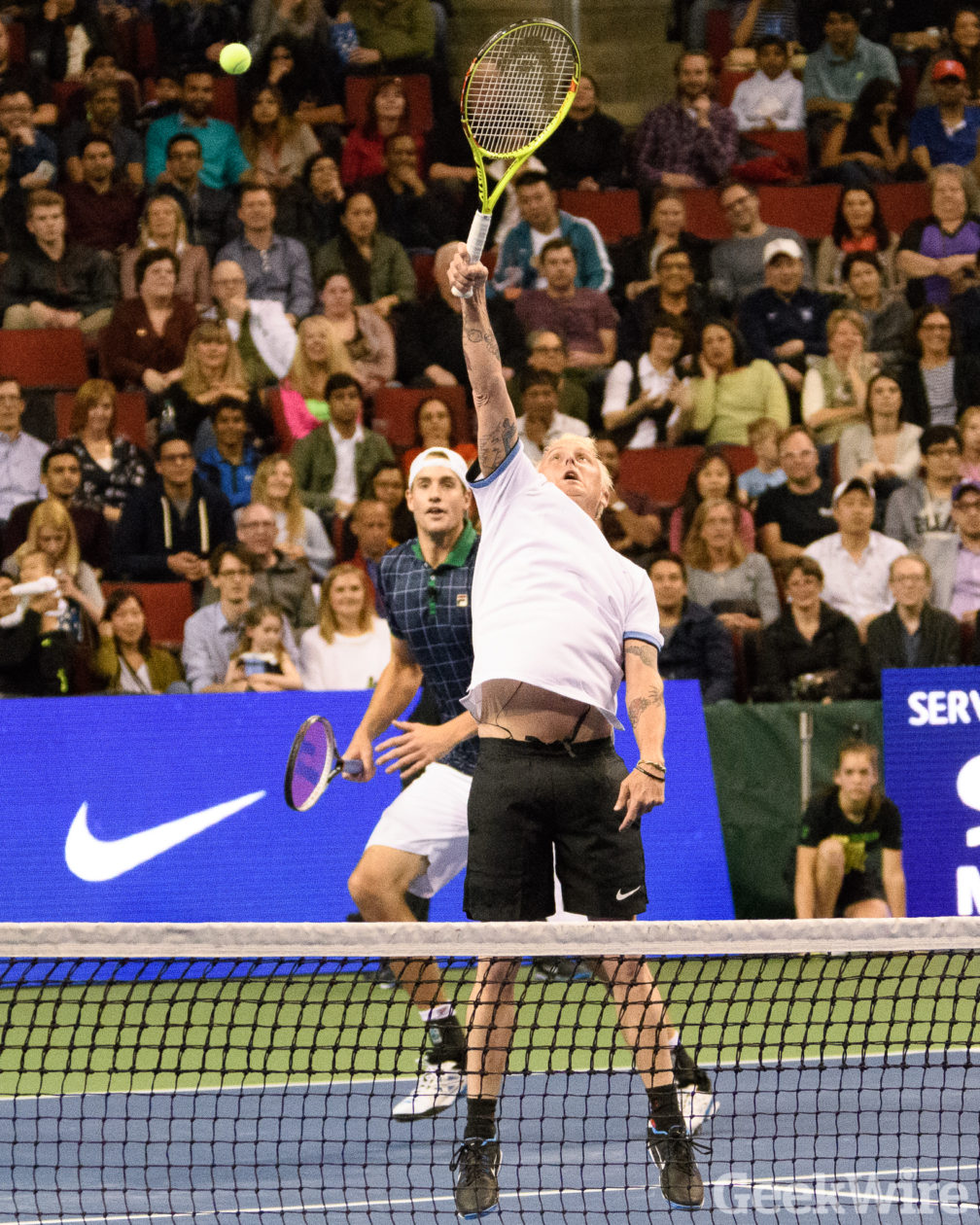 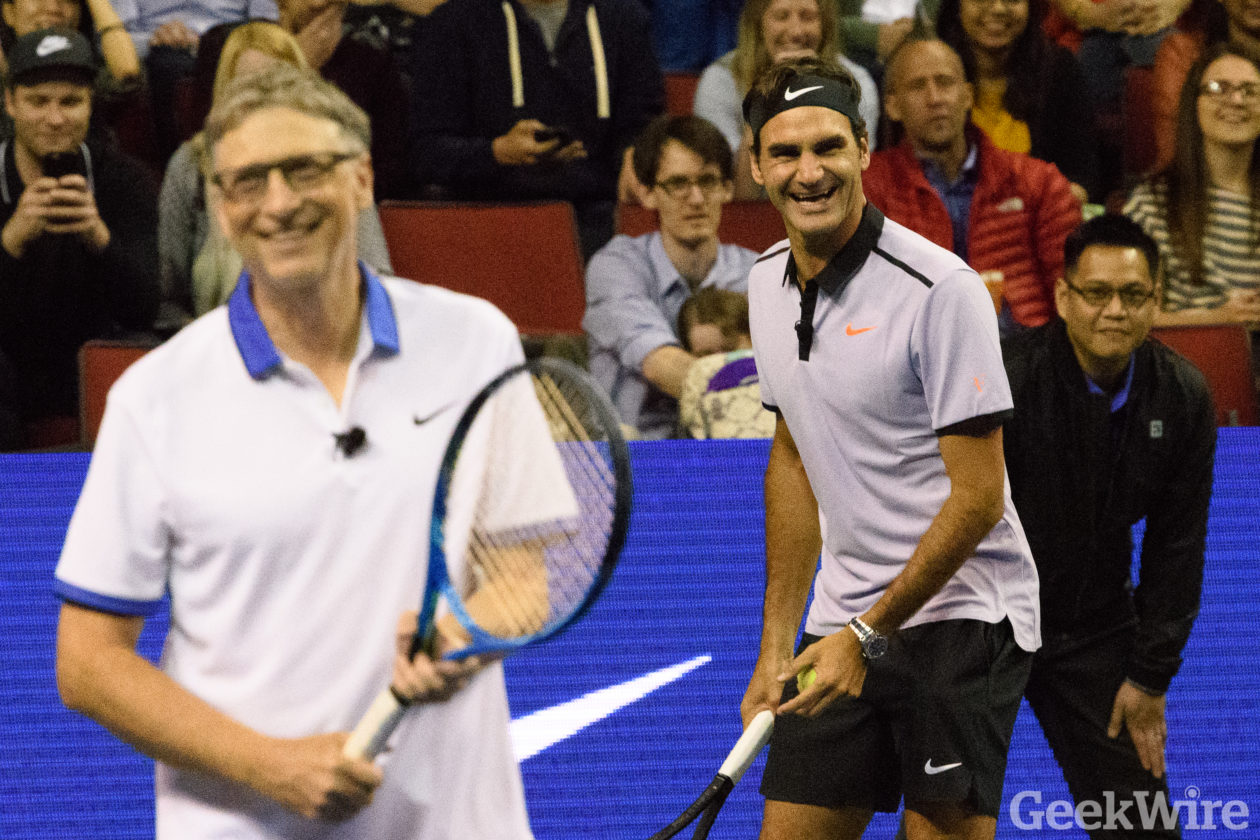 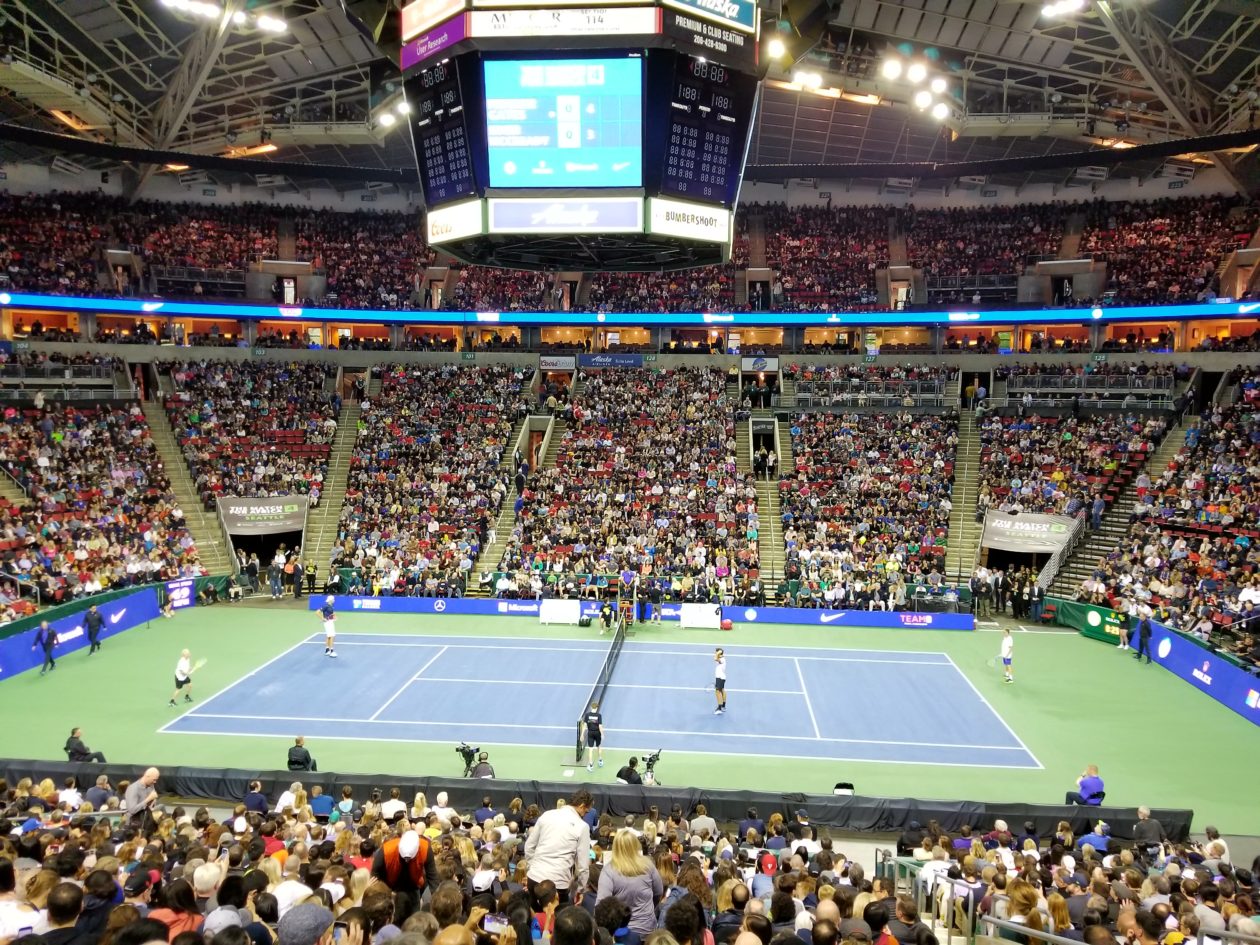 Gates and Federer, who share a passion for not only tennis but also philanthropy, teamed up for the celebrity doubles match against Isner and McCready, the famed Seattle-based musician. It was a light-hearted match with lots of laughs and friendly banter.

“Don’t get nervous Roger,” Isner said at one point to the Switzerland native. “This could be the biggest game of your life right here.”

But the match also managed to be highly entertaining, with several exciting rallies and impressive shots from both sides. The competition was balanced; Isner and Federer with similar skillsets, and the same for Gates and McCready.

It was clear that Gates, who has loved tennis since his early days — his father Bill Sr. was in the crowd on Saturday — was certainly no rookie on the court, with the 61-year-old hitting a variety of skilled shots.

“I don’t think he missed a first serve,” Federer told GeekWire afterward. “I missed a lot of first serves today, so he did better than me.”

It was quite a spectacle to see Federer and Gates, two men who have combined hard work and talent to rise to the top of their respective fields, working together as a team on the court, high-fiving after winning points and strategizing in between breaks on the bench. “Sorry, boss,” Federer said to Gates at one point during the match, rather funny coming from the tennis legend to Bill G. 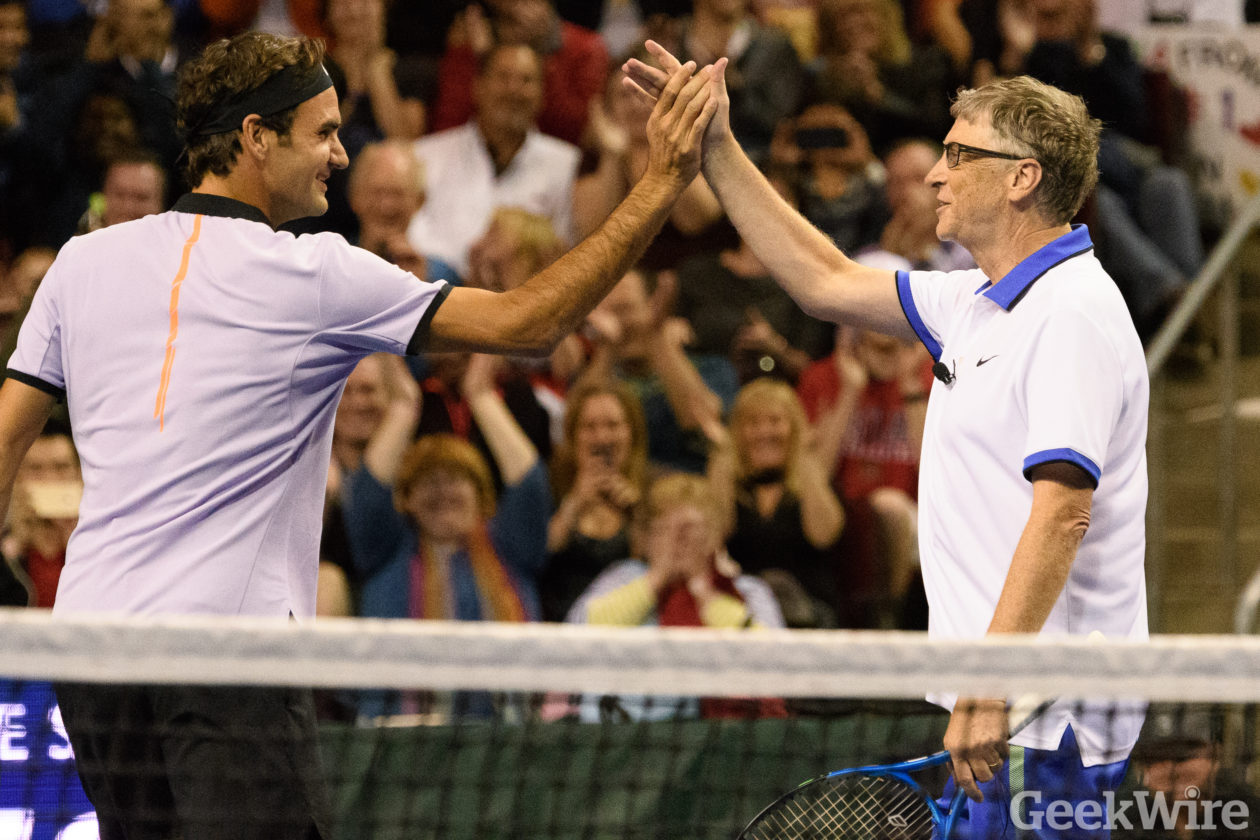 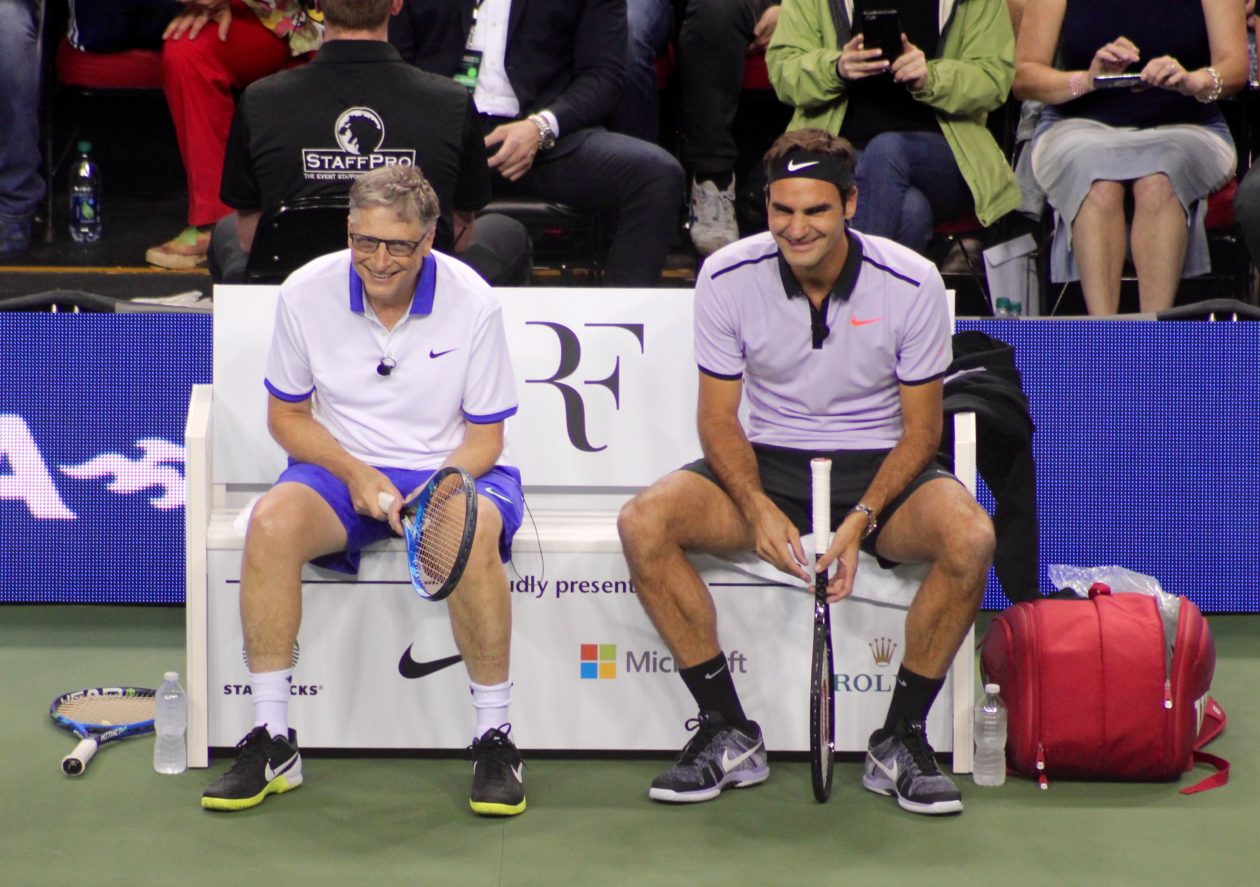 Ultimately the duo ousted Isner and McCready — who also played the national anthem — with a 6-4 one-set victory.

“It was great to have him part of the night,” Federer said of Gates, who he just met for the first time this year. “Just put yourself in his shoes or Mike’s shoes, to come out and play in front of 16,000 people in what you don’t do best. Bill does a lot of great things and he’s got such a bright mind, and Mike is so unbelievable on the guitar. So for them to come out in my world and actually expose themselves like this — it’s not simple. They did amazing, and I can’t thank them enough for being part of the night.”

Federer, who has already won three tournaments this year including the Australian Open, then dueled with Isner in a three-set exhibition match, as both pros turned on the jets a bit and let the crowd enjoy some premier tennis.

One of the memorable moments of the evening came during the first set, with Federer up 4-2. Isner hit a clever drop shot that forced Federer to sprint toward the net and reach out with his right hand for a slicing backhand. Isner then lifted a return shot over Federer’s head, which led to one of the more ridiculous tennis plays you’ll ever see that reminded everyone of the Swiss Maestro’s incredible skill — even nearly two decades after turning pro.

.@rogerfederer is on ??? Did you see those shots?? ? pic.twitter.com/hUMgejH7YY

Isner, currently ranked 23rd in the world, was just as stunned as everyone else in the crowd, which rose to its feet with a thunderous ovation for the remarkable shot and glimpse at pure tennis talent.

“Ten or 15 years ago, I wouldn’t have imagined playing a doubles match against Roger Federer and Bill Gates,” he told GeekWire. “It’s a once-in-a-lifetime opportunity. No one gets to experience something like that and I did tonight. It was really special.” 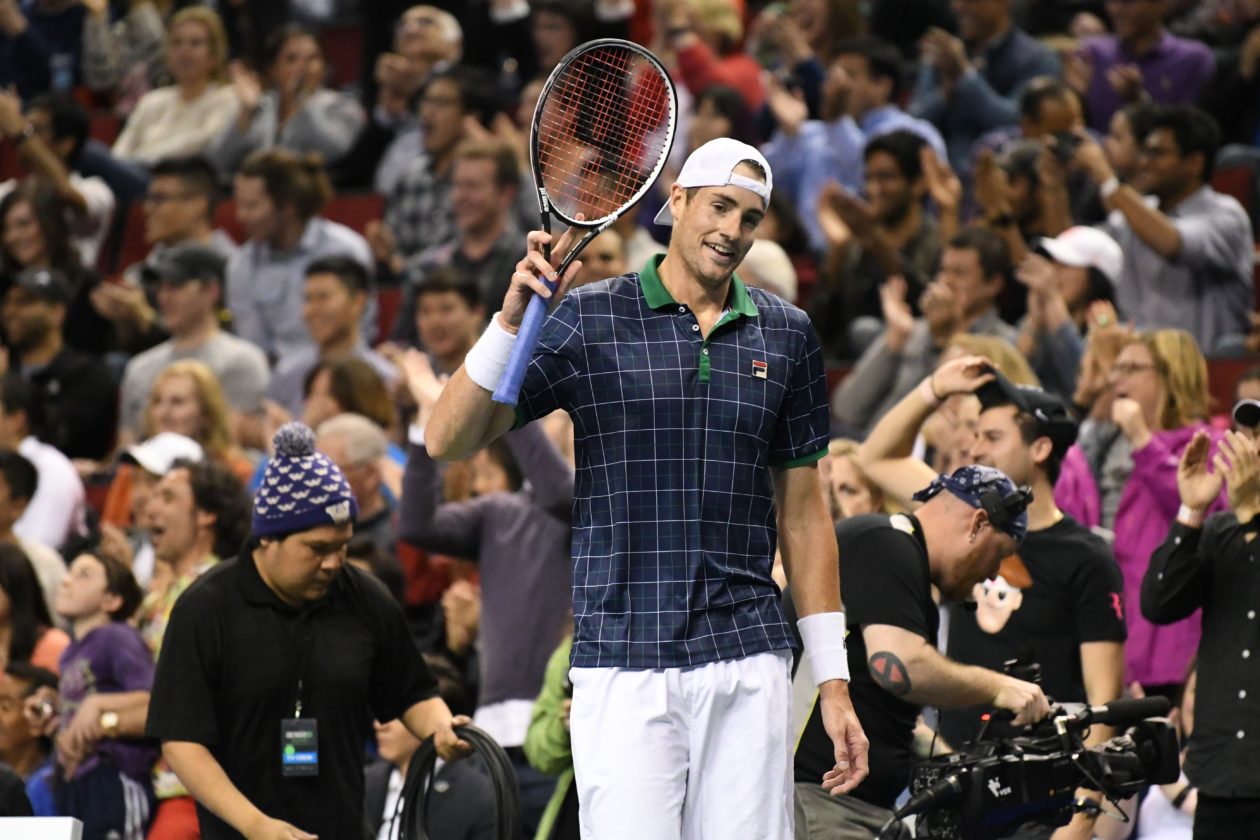 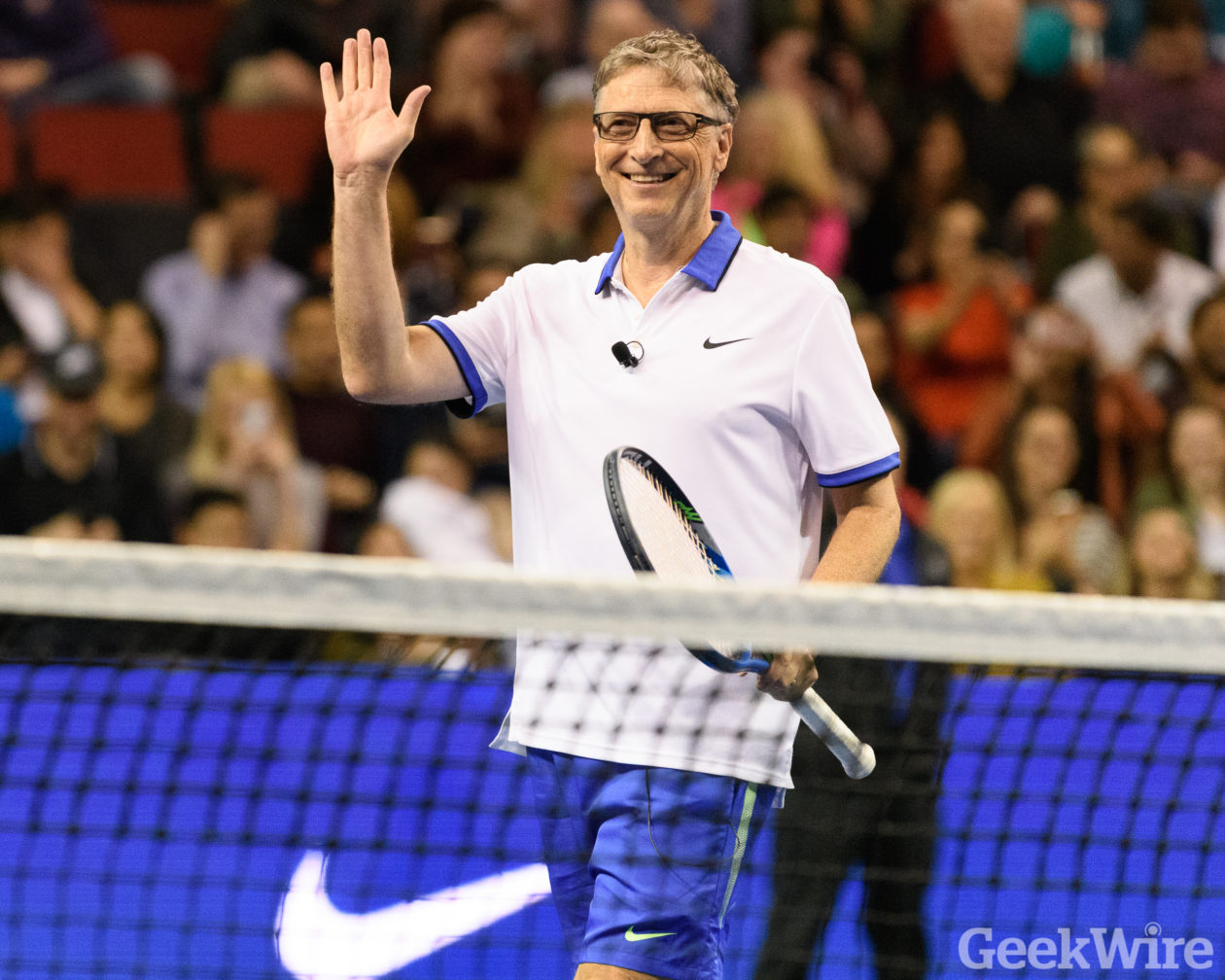 The love and respect for Federer was felt throughout the entire evening, from the moment he took the court for the first time ever in Seattle to the very end, when the 35-year-old spent time walking around the arena signing autographs for wide-eyed fans clamoring for a moment with their tennis hero. Federer, who called Seattle “beautiful” and said the people are “unbelievably friendly,” also answered questions from the media afterward, noting how it was cool playing in Key Arena because he followed the NBA’s Seattle Supersonics team as a youngster. 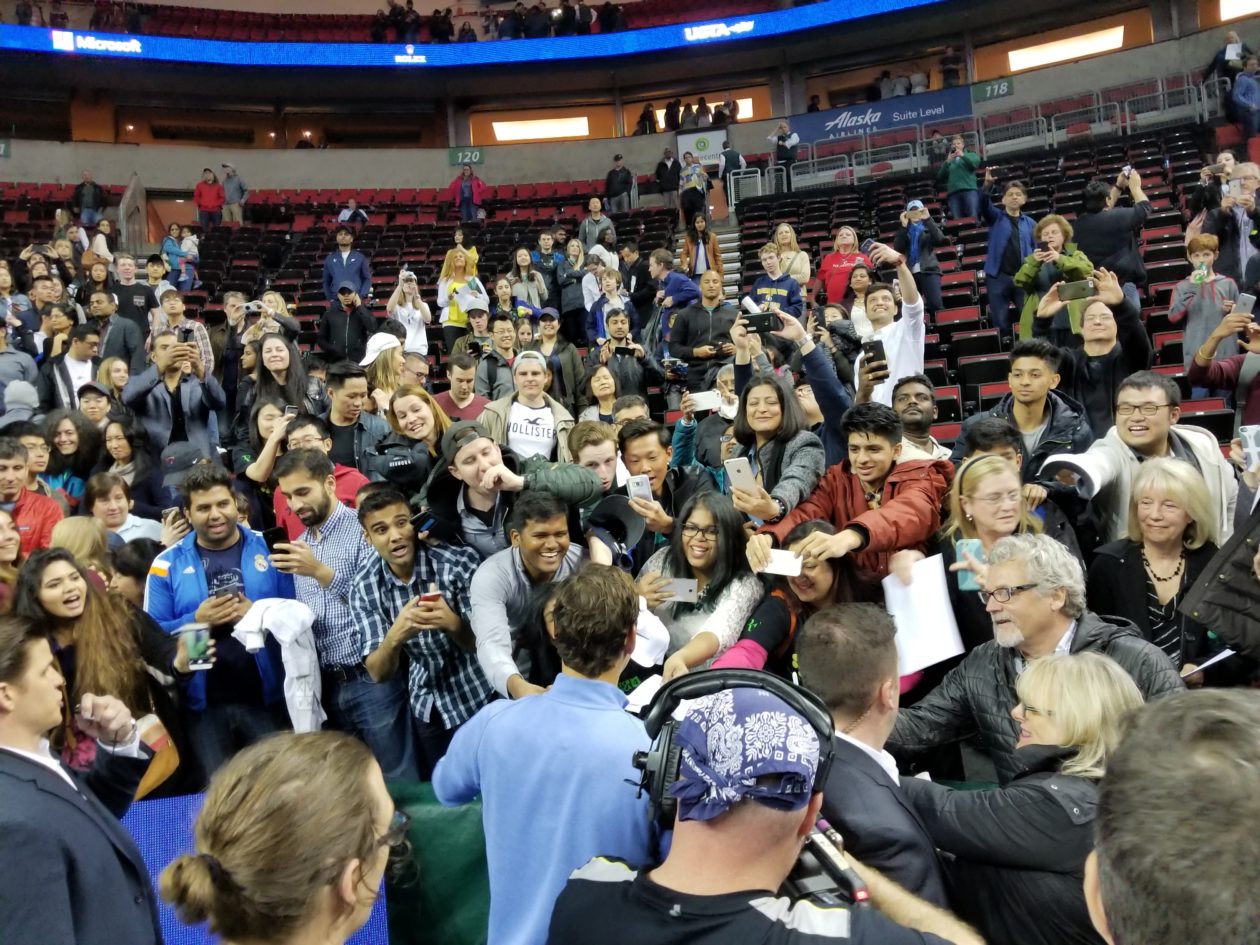 There were a handful of local technology executives in the crowd, including Raj Singh, Concur co-founder and currently CEO of healthcare company Accolade.

“As a tennis fan, being up close and personal watching Roger Federer and John Isner play was incredible,” Singh told GeekWire. “But didn’t McCready and Gates steal the show?”

Also in attendance was Microsoft Chief Marketing Officer Chris Capossela, who spoke with Gates before the match on Saturday. The two were chatting about one of Gates’ previous charity tennis appearances back in 2001 with Pete Sampras and Andre Agassi in Seattle. It’s clear that the Microsoft co-founder has improved his game since then.

“I asked him how he was feeling, and he told me that he’d look much better than [the 2001 match],” Capossela said.

Microsoft’s marketing chief also noted how quickly Saturday’s event came together, given that Gates and Federer just recently met for the first time earlier this year when they hatched the idea for Match for Africa 4.

“Leave it to Bill to go fast,” Capossela said. 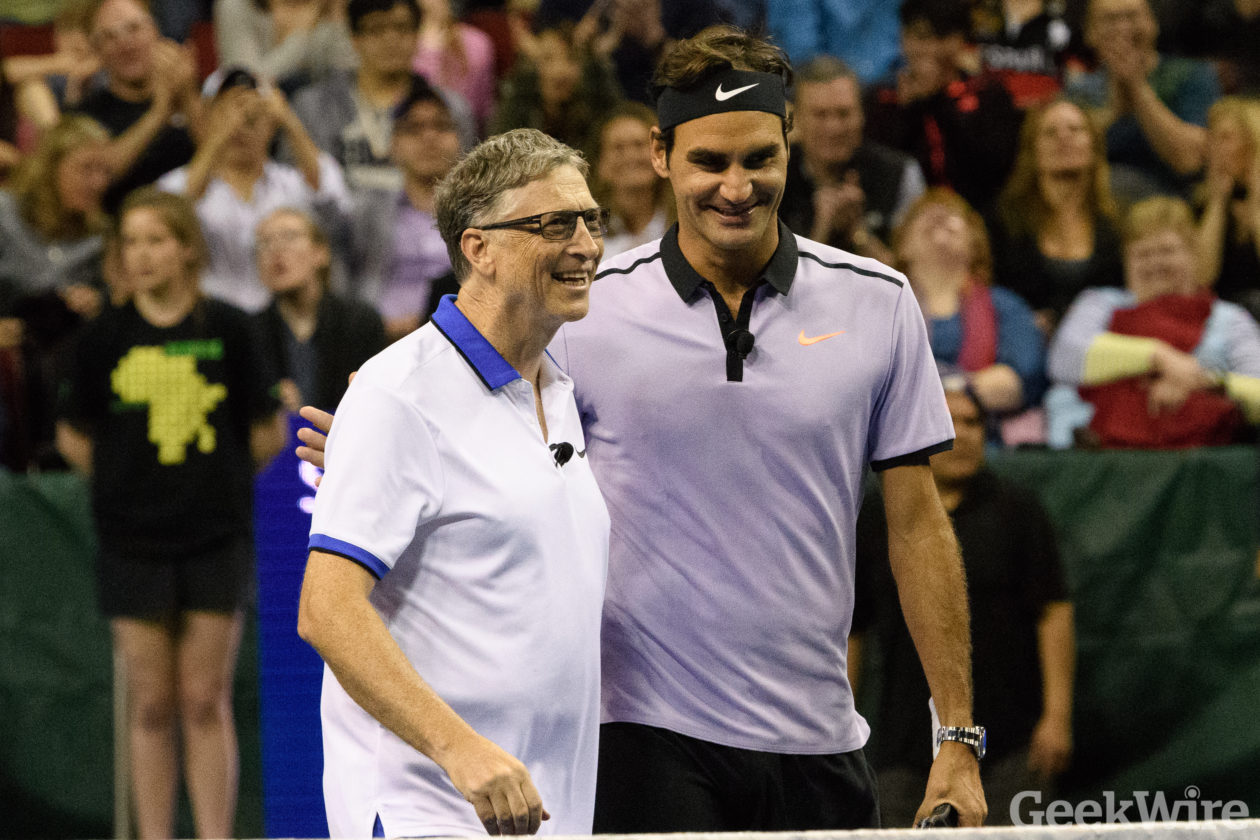 As a fellow philanthropist, Federer said it’s invaluable to know someone like Gates, who dedicated his life to charitable causes through the Bill & Melinda Gates Foundation following his career at Microsoft.

“For me, what I can take away from this is that I know Bill Gates now,” Federer said. “Being able to call upon Bill and ask him for advice, and now with our two foundations knowing each other, it’s a different world. He’s put me together with some very interesting people; that’s what he does so well because he speaks to world leaders and so forth. So for me, just being able to meet Bill and also Melinda, who is such a nice person, it’s truly, truly amazing.”

As Federer has risen to the top of the tennis world, winning more tournaments and inking more endorsement deals, he’s spent time thinking about how to give back. That’s partly why he and his parents helped launch the Roger Federer Foundation, which focuses on investing in early education for children in Africa. Since 2003, the foundation has impacted nearly 700,000 kids and aims to reach 1 million by next year.

Janine Händel, CEO of the foundation, called Saturday’s event “an unforgettable experience.” She recalled a recent conversation with Federer’s manager, who noted how perhaps one day Federer’s impact will be felt more by the children in Africa than by the tennis world — perhaps similar to how Gates might be remembered for his philanthropic efforts more than what he helped create with Microsoft.

“Of course Roger is a world champion in tennis,” Händel said. “But maybe what he does off the court has even much more meaning — and maybe even bigger and greater than his successes in tennis.”