It’s unclear if everyday mainstream consumers will be using virtual and augmented reality in the future, but Maveron is betting on it.

The Seattle-based venture capital firm, founded by Starbucks Chairman Howard Schultz and long-time investor Dan Levitan in 1998, is paying close attention to the virtual and augmented reality industry as the firm tries to find the next great consumer company.

Maveron differentiates from other firms because it invests only in consumer brands; it has backed companies like eBay, Shutterfly, Potbelly Sandwich Works, zulily, Groupon, Drugstore.com, and many others since launching nearly two decades ago.

“We are excited about AR/VR and its potential to create immersive consumer brands and businesses,” Levitan told GeekWire. “Given our intense focus on finding the next great emerging consumer businesses in obscurity and helping them scale to ubiquity, this area is a natural place for Maveron to turn its attention to.”

Anarghya Vardhana, a senior associate at Maveron, explained why the firm is so bullish about VR/AR.

“We see this as a way in which people interact with the world around them; with each other; with entertainment; with work,” she told GeekWire. “It’s going to be a big computing shift, just like we saw a computing shift with the personal computer and cell phone.”

Maveron certainly isn’t alone with this strategy. Total investment in VR/AR companies reached $1.8 billion in 2016, up 140 percent from 2015, according to data from CBInsights. Deal volume reached 171, up 14 percent from the year prior.

Fellow Seattle VC firm Madrona Venture Group is also investing big in VR. Matt McIlwain, a managing director at Madrona, touted the promise of the technology in 2015 after the firm raised a $300 million fund. 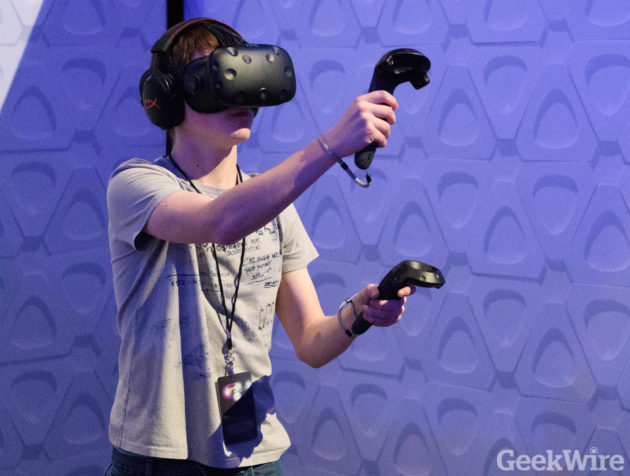 “We think the next decade plus is going to be a big transformation, and there are going to be a lot of winners up and down that stack,” McIlwain said of AR and VR.

Others, however, aren’t so sure. Erik Benson, partner at Seattle-based Voyager Capital, said that “there are no VC opportunities in AR/VR in the near term” when speaking at an event this past December.

He added that most of the money flowing in VR today is coming from venture capitalists, not paying customers. “Today, I see no billion-dollar companies in VR,” said Benson, adding that there is basically no consumer market for people buying VR products outside of gaming. He said it will be at least 10 years for that to change.

Benson was quoted in a Wall Street Journal article published this week that examines how sales of VR headsets “haven’t lived up to the hype” and has caused some developers to “reconsider VR.” The story cites examples like EnvelopVR, the Bellevue, Wash.-based startup that shut down last month because it was “way early,” according to its CEO.

Maveron’s Vardhana said it’s “super important to be a healthy skeptic with this, just as with other technologies.” She said Maveron is being realistic about the time frame and capital needed for the technology to reach mainstream consumers.

“I think it’s important for us as investors, as founders, and as a community to have that healthy skepticism,” Vardhana noted.

Vardhana said Maveron noticed many strong technologists building VR and AR experiences “without a strong sense of consumer.” But that’s changed over the past year or so.

“We’re now seeing the beautiful intersection of technologists either having a consumer sense, or having people on their team with a consumer sense,” she explained. “When that match-up starts happening, that’s really our sweet spot.”

Vardhana said she thinks the long-term day-to-day consumer use case will not be with a device that is masked to your face. Rather, the Stanford grad is excited for an augmented reality future where apps and browsers are no longer limited to a physical screen.

“That’s what keeps me up at night thinking about the possibilities for this,” she said. “Regular human beings will interact with the world around them in a way that was unprecedented. It infinitely opens up the possibilities from looking at a tiny screen to a regular everyday environment that has digital layers on it.”

Vardhana added that Maveron, just as it does with its other investments, places emphasis on finding the right founders leading VR and AR startups who have a realistic perspective about the future of this technology.

“We bet on founders that have those realities and can navigate them,” she said.