The three new regions will be in the Netherlands, Canada and California, said Urs Hölzle, the Google senior vice president for technical infrastructure, addressing the crowd at the event this morning. Of the eleven announced last year, Oregon and Tokyo are now live, and Singapore and Northern Virginia will come online in the next few months, with Sydney and London following shortly after that, he said. 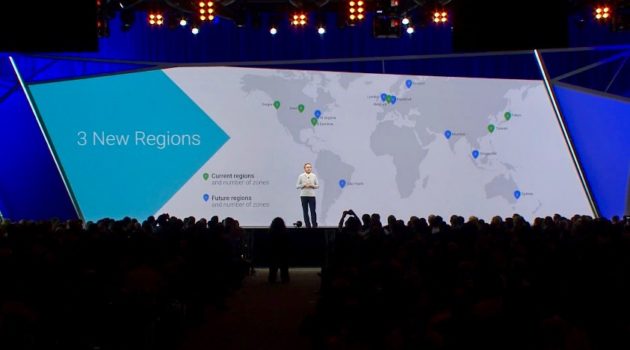 Regional coverage is increasingly important for cloud providers to provide redundancy and compliance with local data hosting laws for businesses in some parts of the world. Although each company defines its regions differently, Microsoft says Azure has 34 regions, with plans for an additional four. AWS says it has 16 regions, with two more in the works currently.

In addition to new regions, Google also announced a new “committed use” discount program for cloud users who make long-term commitments. In exchange for a one- or three-year commitment with Google Cloud, customers can receive up to a 57 percent discount.

Hölzle said one of the biggest problems in cloud computing is that companies waste a lot of money by they locking themselves into long-term leases for storage space they don’t ultimately use. Google Cloud, he says, offers the flexibility to switch between different storage sizes and other custom options for customers to manage their cloud as they grow. Hölzle claims Google saves customers on average 60 percent on cloud costs over competitors.

“Only (Google Cloud Platform) is a truly elastic cloud. You only buy what you need, you only pay for it when you actually you use it, you get automatic discounts when you use it for extended periods of time and we even alert you when you appear to be wasting resources,” Hölzle said.

RightScale, a cloud management company that has a booth at the conference, released a blog post shortly after the committed use packages were out, saying Google’s discount program would save customers more money than Amazon Web Services’ Reserved Instances program.

The Google Cloud Next Day 2 keynote is ongoing, available to watch below.