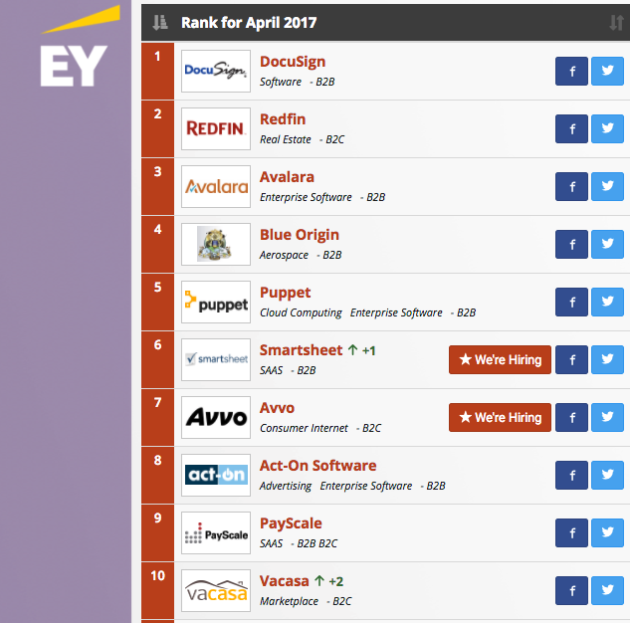 Smartsheet, the Next Tech Titan award winner at the 2016 GeekWire Awards, has been fulfilling that potential lately.

Smartsheet is close to cracking the top 5 of the GeekWire 200 list of privately held Pacific Northwest startups, coming in at number six in April. Smartsheet started the year at number 13 on the list and it has steadily risen toward the top.

Smartsheet reported subscription revenue of more than $70 million in 2016; that number has grown at least 70 percent year-over-year for the past five years. Smartsheet has also made some key executive hires in recent months.

In January, Smartsheet announced plans to open an office in Boston this year, and CEO Mark Mader said the company could employ as many as 1,000 people within three years.

Smartsheet wasn’t the only mover near the top of the list. Vacation rental startup Vacasa climbed two spots to move into the top 10. The top 5 remained static again this month, with DocuSign at the top, followed by Redfin, Avalara, Blue Origin and Puppet.

Click for the full April update to the GeekWire 200 and continue reading for highlights.

Seattle startup Highspot cracks the top 150 this month, after rising 17 spots to number 148. Highspot and Waltham, Mass.-based Brainshark announced a strategic partnership last October. Then in February, the two firms debuted a product that integrates Highspot’s platform for sales content management, customer engagement and analytics with Brainshark’s application for onboarding and sales training.

Highspot was founded in 2014, and its CEO is former Microsoft exec Robert Wahbe. The idea for the company came out of team members working for organizations where things would have gone much better if employees had access to the combined knowledge of the company.

Just this week, Moxi Works, a Seattle-based startup that provides an open cloud platform for real estate brokerages, released a new product called Secret Agent that gives real estate agents access to a trove of public data on clients and prospects. That could include everything from demographics and housing information down to more detailed metrics like hobbies, pets and shopping data.

Moxi Works, which jumped 12 spots this month to number 159 on our list, has also been adding plenty of integrations to its platform lately. Zillow, DocuSign and Inrix are a few prime examples of local companies with integrations on Moxi Works’ cloud platform.

VIAR is a multinational virtual reality startup with offices in Seattle and Celje, Slovenia. It rose 23 spots on the GeekWire 200 this month to number 167. The company launched in 2015 and built virtual reality tours to help architects show clients future construction. That wasn’t working, and the company was close to bankruptcy, so it decided to pivot.

The company now focuses on Viar360, its publishing platform for VR apps. Its main areas of use are in journalism, corporate training and experiential marketing. VIAR says 12 top American journalism schools use its platform, and in February it started working with Delo, Slovenia’s largest national newspaper, and DefenseNews, a military-oriented digital publication.

Here are some of the other big movers in April:

Five startups made their debut on the GeekWire 200 or returned to the list in April. They are: SheerID, Lighter Capital, Code Fellows, Textio and Unikrn.

The GeekWire 200 — sponsored by our partners at EY — is derived from our broader list of more than 900 Pacific Northwest tech startups. The list is designed to provide a better understanding of the startup landscape in the Northwest. The ranking is generated from publicly available data, including social media followings, approximate employee counts and inbound web links.