Ever since the success of Valve’s Half-Life nearly 20 years ago, video games of all types have been increasingly expected to have a detailed narrative. Now, writers of those games will be eligible to receive one of science fiction’s highest honors — the Nebula Award.

That’s one of the changes reflecting the evolution of science fiction’s long-standing professional organization, the Science Fiction and Fantasy Writers of America (SFWA), as fantastic storytelling has become more mainstream. Founded in 1965 to protect the interests of professional writers, SFWA has nearly 2,000 members today and — despite its name — is global in scope. Readers know it mostly for the Nebulas, which vie for recognition with the fan-voted Hugo Awards.

“I would think that one of the things a Nebula imprimatur would mean for a game is that it is a game that really has some story to it,” Rambo said. “That it’s a game that can achieve that sort of immersive wonderful experience that only text can bring.”

Rambo, a Seattle writer who is in her second term as SFWA president, sat down with GeekWire for this episode of our new podcast series on science fiction, pop culture, and the arts. Rambo has written more than 200 short stories and been nominated for the Nebula and World Fantasy Awards. Her stories are most recently collected in Neither Here Nor There (Hydra House) and Altered America: Steampunk Stories (Plunkett Press).

[Listen to the podcast below, or download the MP3 here.]

The game writer award wasn’t an easy addition, Rambo said, recalling that simply admitting game writers to the organization took three tries in three different decades. Her hope is that the new Nebula for game writers will both help game buyers recognize quality and writers raise their profile and exposure. 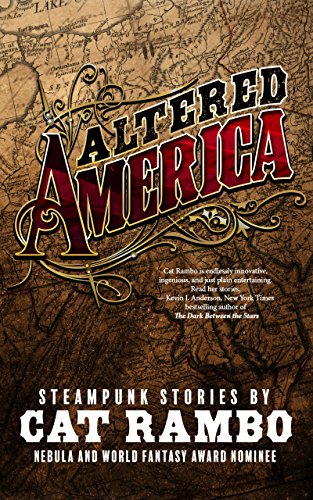 The new award joins honors for long-standing Nebula categories of novel, novella, novelette, and short story, plus awards for dramatic presentation and young adult book. And yes, in an era when a crowd-sourced recommendation is only a click away, Rambo thinks a Nebula still has cachet because, “it’s a peer-given award, as opposed to sort of everybody voting … this is a very special and significant one.”

As to the Hugos, which are chosen by fans at the annual World Science Fiction Convention, Rambo sees them as complementary, not competitive (despite the fact the Hugos have announced that they, too, will add a young adult honor). Still, even science fiction awards are not immune from controversy.

This year, the Hugo categories were largely swept by women when the winners were announced in August. That’s a dramatic turnaround from a 2015 dispute in which “No Award” was a common winner after two conservative/libertarian-leaning “puppies” groups (“sad” and “rabid”) tried to take over the ballot with bloc nominations, objecting to what some pups called “social justice warriors” who wrote what they thought was boring stuff.

“It’s been very interesting because of course it’s been sort of the larger culture wars getting played out in that particular arena,” Rambo said. “And it has been I will say extraordinarily ugly at times and to a point where I find myself very grateful that SFWA is not the body that administers the Hugo Awards.” However, she said the process has been self-correcting, and thinks the latest Hugo winners “are much more representative … of the best and brightest.”

These larger societal and political tensions, especially those in the past year, do take their toll on writers. “I know that a number of the folks that I have spoken to have expressed a great deal of discouragement and a great deal of difficulty in writing near-future science fiction,” Rambo said. “We are all somewhat despairing … and it’s kind of hard to know where we’re going to go next.”

Yet Rambo said that’s why it’s important for writers to keep at it, “to keep pushing for truth and civility because that’s one of the things stories do.” 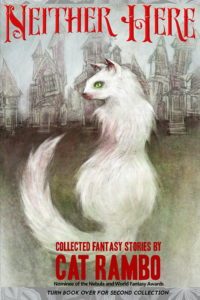 Then, there are the cats.

Cats have a long association with science fiction and fantasy. And naturally, no discussion with a writer named Cat Rambo can avoid them. Not only have cats figured prominently in Rambo’s own work (for example, in the short story “Tortoiseshell Cats Are Not Refundable“), but there have been fictional feline fixtures for decades (one of Rambo’s favorites, in the classic 1958 Fritz Lieber story “Space-Time for Springers“).

Why the affinity? “I think because writers are solitary creatures and often drawn to cats,” Rambo explained. “And when you are sitting at home and the only living creature you are interacting with is a cat, every once in a while the cat is going to creep into your work.”

Overall, the move of science fiction and fantasy into the mainstream is good for writers, and good for SFWA, Rambo said. “I think it affects us in a very important way in that we are eager to hit those new young readers those new young fans and say here’s some good stuff, here’s the stuff that will hook you, here’s the stuff that you will love all your life, and that will lead you down new and interesting paths of reading.”

Previously in this series: Science fiction has won the war: Best-selling author Greg Bear on the genre’s new ‘golden age’