“Free data” programs from T-Mobile, AT&T, Verizon and Comcast are getting a reprieve from the Federal Communications Commission under Ajit Pai, the new FCC chairman, in the latest indication of the Trump administration’s intentions to roll back net neutrality regulations.

In letters made public Friday, the FCC informed each company that it was closing its inquiries into the programs, which let customers use specific types of data without counting against their monthly data allotments. “Any conclusions, preliminary or otherwise, expressed during the course of the inquiry will have no legal or other meaning or effect going forward,” read the letters. 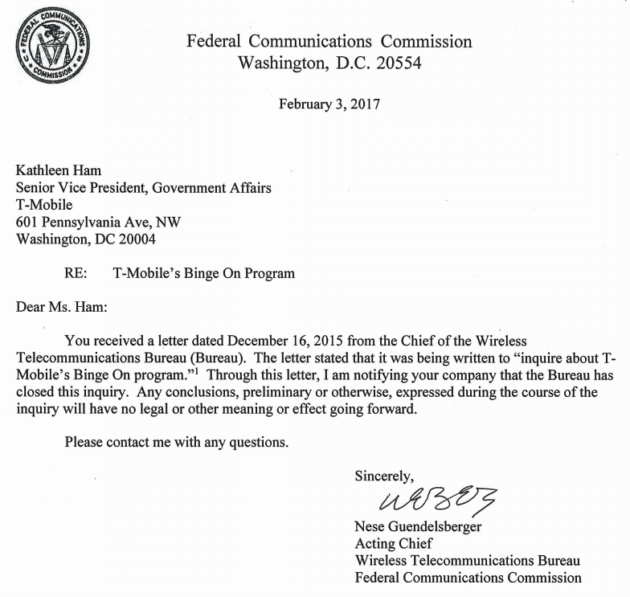 In a statement issued by the agency, Pai confirmed that the FCC is closing the inquiries. “These free-data plans have proven to be popular among consumers, particularly low-income Americans, and have enhanced competition in the wireless marketplace. Going forward, the Federal Communications Commission will not focus on denying Americans free data. Instead, we will concentrate on expanding broadband deployment and encouraging innovative service offerings.”

The programs test the limits of the FCC’s current net neutrality regulations, put in place under the Obama administration, which are based on the principle that all data should be treated equally, without giving preferential speeds or economic incentives to particular websites or Internet services. Pai, previously an FCC commissioner, has been a public critic of net neutrality, and vowed to revisit the rules.

AT&T’s free streaming program for customers of DirecTV was in the crosshairs under the previous FCC leadership, which viewed the program as giving preferential treatment to the AT&T-owned service, to the disadvantage of DirecTV competitors. T-Mobile’s Binge On program, which lets wireless customers stream video from a range of designated providers without counting against customers’ data plans, was viewed as less of a problem, because T-Mobile isn’t giving an economic advantage to one video service over another.

T-Mobile executives have vigorously defended the Binge On program from criticism by the Electronic Frontier Foundation and others.

John Legere, the CEO of Bellevue-based T-Mobile, said of the new FCC leadership in January, “It’s hard not to be excited as a carrier on the potential items associated with a regulatory environment that’s going to be less restrictive and more open, whether it’s on industry structure or on some of the areas where we’ve been pushing.” He added that T-Mobile’s planning for 2017 “is being boosted by anticipation of a good economy and a regulatory environment that’s conducive to us significantly expanding our business.”

Legere has been uncharacteristically quiet as other prominent tech industry executives have criticized and gone to court against Trump’s recent executive orders on immigration.