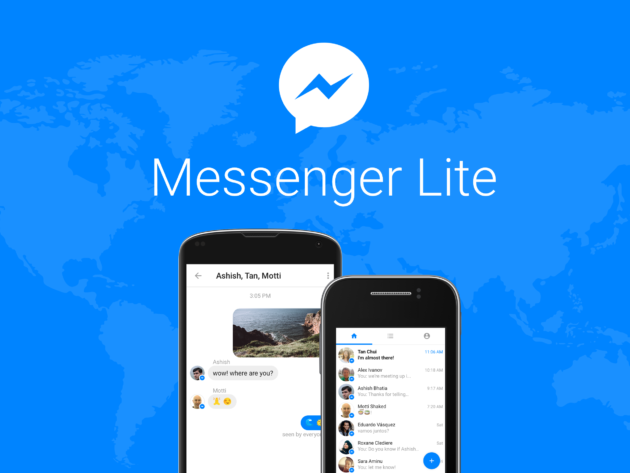 It has been more than three years since Facebook split off the chat function from its main platform to create the separate Messenger app. Ever since, the team has been adding more features and expanding Messenger around the world, with the service now sporting 1.3 billion monthly active users.

But many areas around the world, including some areas of the U.S., don’t have the infrastructure to support some of the more technically complex functions of Messenger. For those parts of the globe, there is Messenger Lite, a bare-bones version of the service for Android meant for calling and messaging using low bandwidth.

Messenger Lite was released a little more than a year ago with an eye toward opening the service up to places of low connectivity, or where newer, more powerful phones are unavailable. But the simpler version of the chat app proved popular and expanded to the U.S., U.K. and Canada just last month.

Building Messenger Lite has been a unique challenge for the team, requiring engineers at one of the most advanced tech companies in the world to adapt to the tight constraints of low bandwidth.

“This is generally a pretty unexplored space in mobile right now,” said Josh Guilfoyle, the technical lead for Messenger Lite. “It’s like learning how to build apps the way that they were built 10 years ago when Android was brand new, in terms of engineering and technically, but building them to quality standards of today, 2017.”

The key difference between Messenger and the Lite version is that all the bells and whistles have been removed to focus on a core set of functions like messaging and calling that can be done in areas with minimal service. Gone are Stories, app extensions and Games, and many other features that Facebook engineers poured hours into over the years.

The idea for Messenger Lite first came up about two years ago. Facebook Lite, the stripped-down version of the main platform, was already up and running, and customers were excited about the idea of the app requiring fewer resources. The company looked for ways to extend the bare-bones concept to its other apps and services.

“It could be installed and not take up much space, and if you have a low memory or low disk space it still works really well,” Guilfoyle said of Facebook Lite. “We started collecting a lot of that data from them and realizing that this is something that could apply more broadly to the Facebook line of products, and Messenger felt like the obvious one to go after because, in order to use messaging on our platform, it depends on other people using messaging on our platform.”

Guilfoyle has been at Facebook for close to five years, working on Android products for much of his tenure. Guilfoyle’s mother worked at IBM, and he has been plugged into the tech world since he started coding at age nine. He got more serious in his early teenage years, diving deep into the open-source community.

Messenger Lite has been a unique challenge for the team because it requires the ability to understand limitations and make tradeoffs when eliminating features to help the product run smoothly. Projects like Messenger Lite are also a good reminder for highly paid engineers working in some of the world’s most vibrant cities, that people in other parts of the world have a greater need for simplicity and basic functionality than for flashy features.

“Being an engineer at Facebook means that you almost assuredly live in one of the techie hub areas in the world, so your day-to-day experience is very different than the day-to-day experience of an average person in the world,” Guilfoyle said. “If you sampled 100 people, the odds are they’re not surrounded by Google Pixel 2s and blanketed in ultra high speed 4G LTE.”

“One of the big challenges socially in a way, but ultimately technically still, is trying to understand that and really break that down and develop that kind of intuition,” he said. “The intuition is that networking is fast because it seems fast to me all the time. If I look at the data, it’s not fast on average, so we need to think about this.”