Now anybody can fly like a VIP: All you have to do to take Deer Jet’s super-elegant 787 Dreamliner for a ride is fork over $70,000 an hour.

“This plane is not ‘luxurious,’ The philosophy for the design is natural. … It’s to make you feel very comfortable, so you can save your energy and you can do your job better,” Frank Fang, vice president of China-based Deer Jet, told GeekWire during a tour of the plane, which was sitting in front of Seattle’s Museum of Flight.

This Boeing 787 business jet is the only one of its class in the world. It doesn’t have 24-karat gold-plated bathroom fixtures, like the Boeing 757 that President Donald Trump flew during his campaign. But its 2,400-square-foot passenger cabin does have a master bedroom with a king-sized bed and a double-sinked bathroom with a commodious shower stall.

In the lounge area, you’ll find a 55-inch flat-screen TV, comfy chairs and a full-size dining table, all done up in tasteful shades of white, tan and brown.

There’s enough room for up to 40 people to fly, including the assistants and bodyguards who take their seats in the back.

Fang declined to identify who rents the plane, other than to note that clients have included the heads of Fortune 500 companies and members of Middle Eastern royal families. “In this industry, we don’t mention anything about the clients,” he said.

The VIP who took the trip to Seattle from Doha in Qatar was Adam Tan Xiangdong, the CEO of the Beijing-based HNA Group, who testified to the jet’s comfort during a news conference at the Museum of Flight.

Another reason why Tan was able to rest easy is because HNA Group owns what’s known as the 787 Dream Jet. Deer Jet, an HNA subsidiary, manages the fly-by-the-hour VVIP service (for “very, very important people”) and provides more traditional business jet services that use smaller jets. 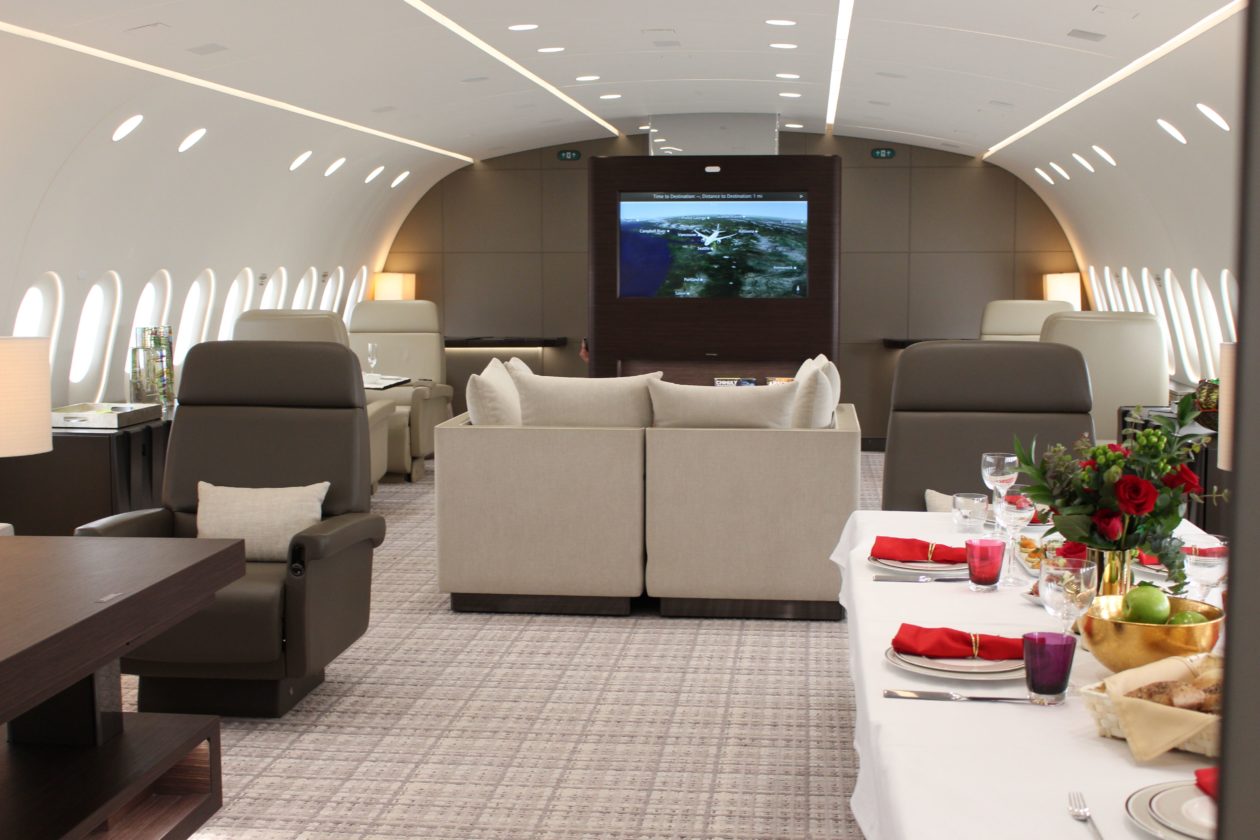 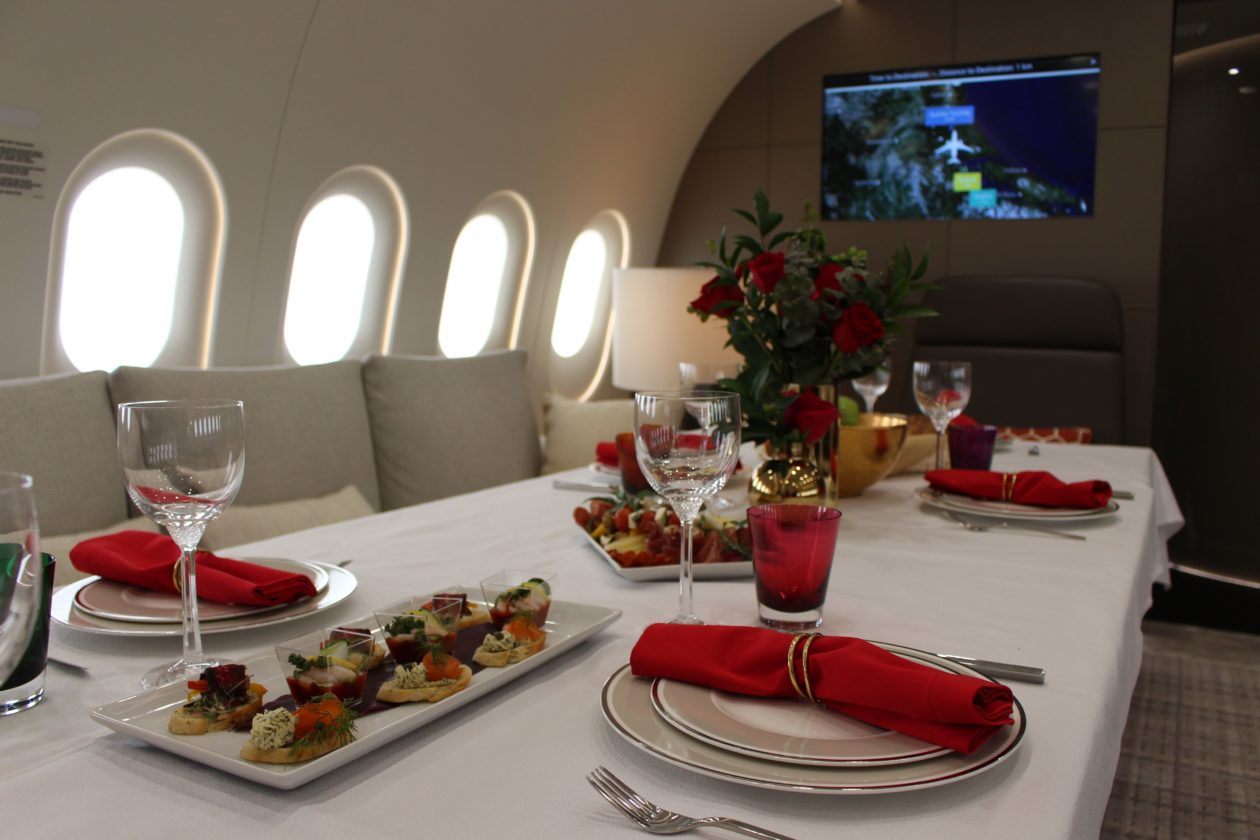 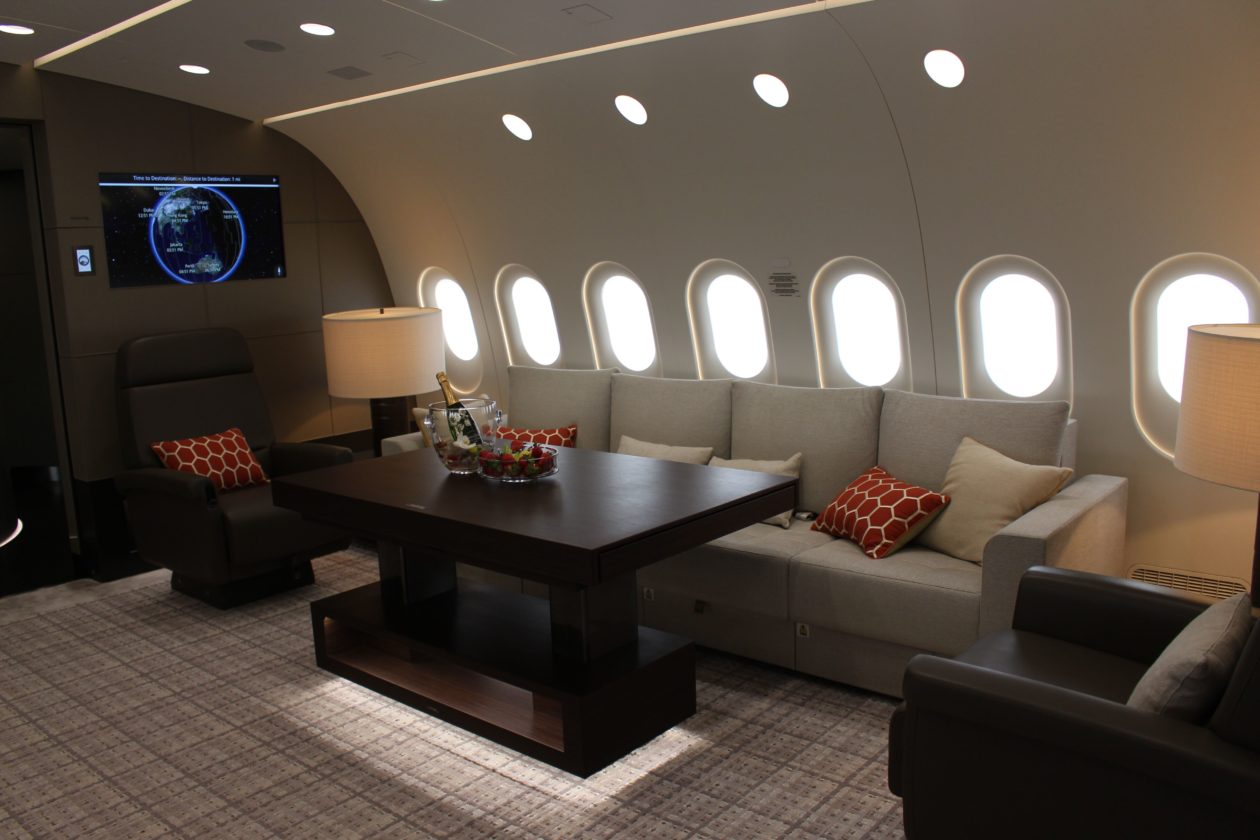 You don’t have to worry about single or double aisles in the Dream Jet’s main lounge. (GeekWire Photo / Chelsey Ballarte) 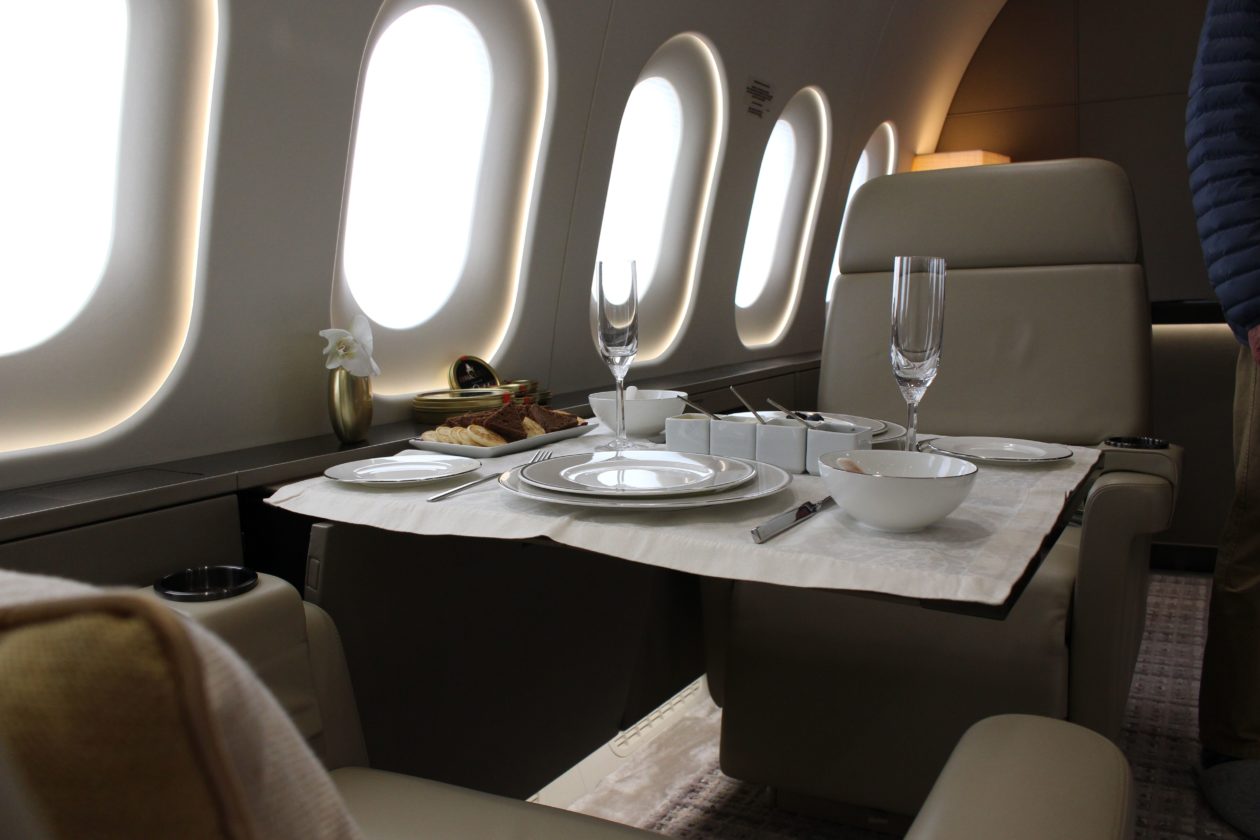 Dinner for two? No problem on the Dream Jet. (GeekWire Photo / Chelsey Ballarte) 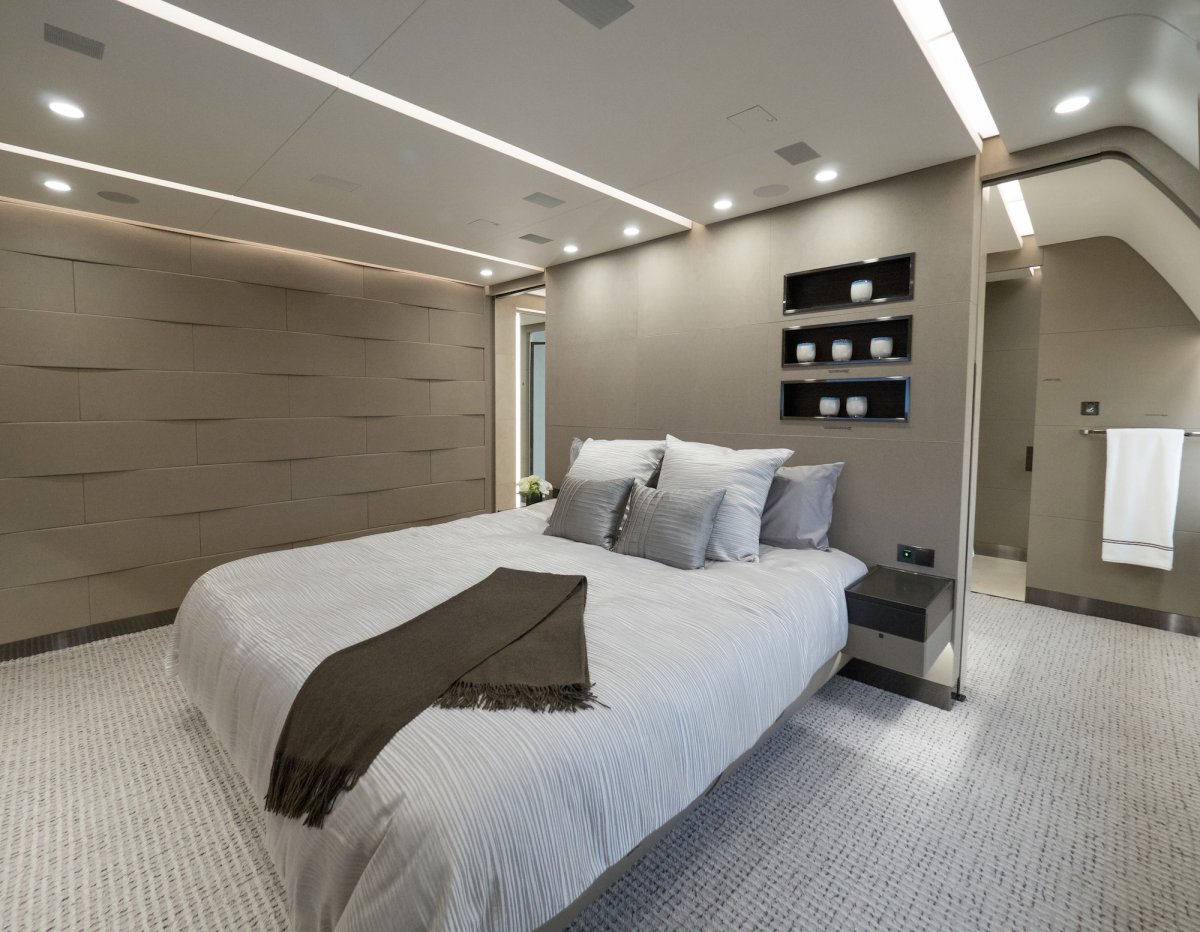 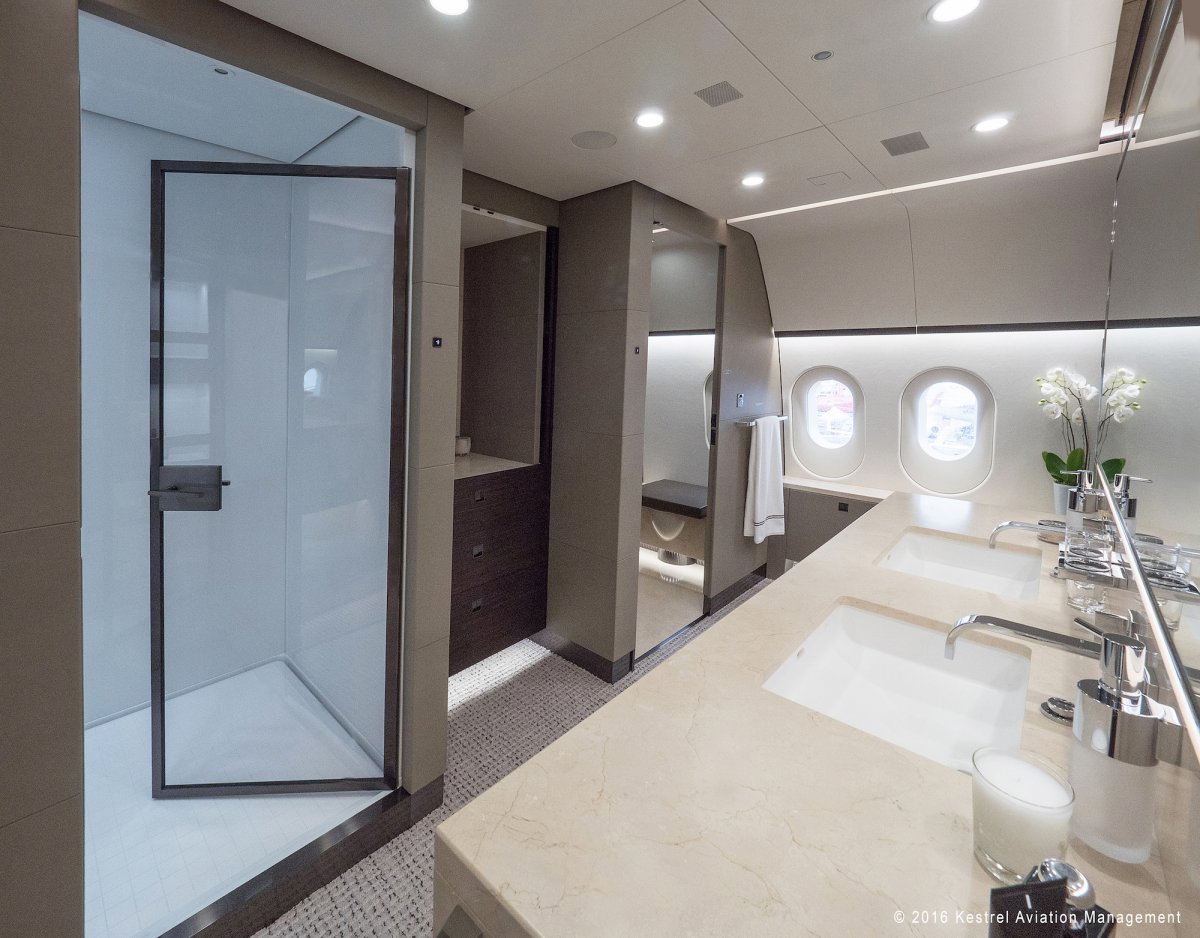 The bathroom for the master bedroom offers a shower stall and a twin-sink vanity. (Kestrel Aviation Management) 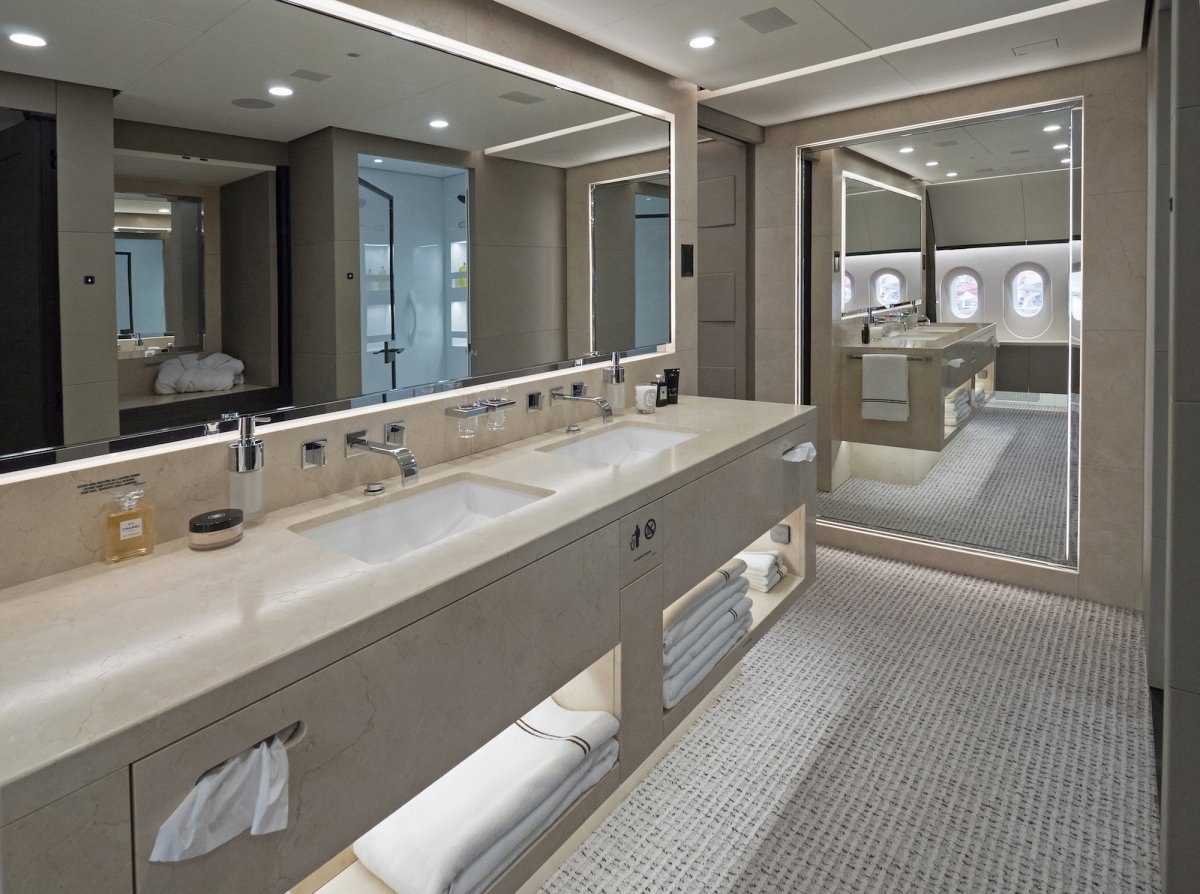 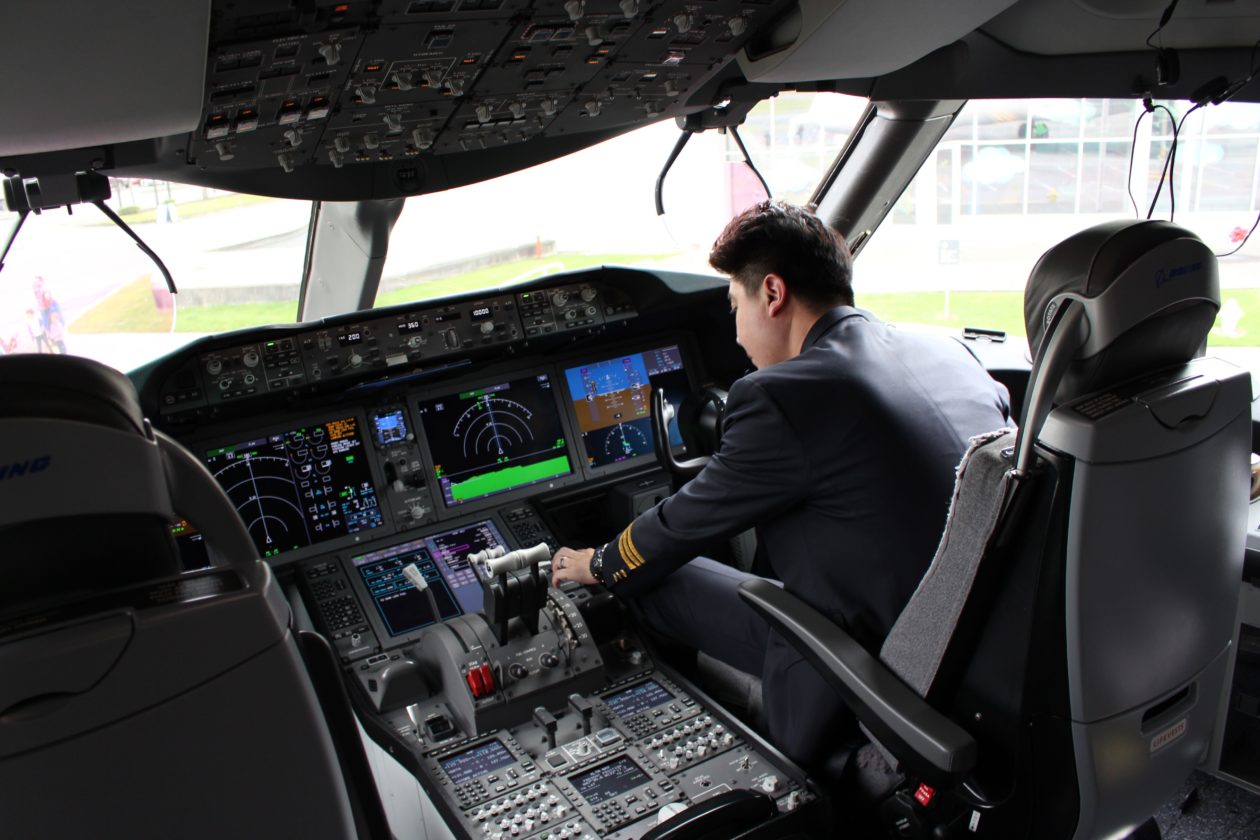 A pilot is on duty in the cockpit even while the plane is parked. (GeekWire Photo / Chelsey Ballarte)

The 787 cockpit is equipped with a heads-up display system. (GeekWire Photo / Chelsey Ballarte) 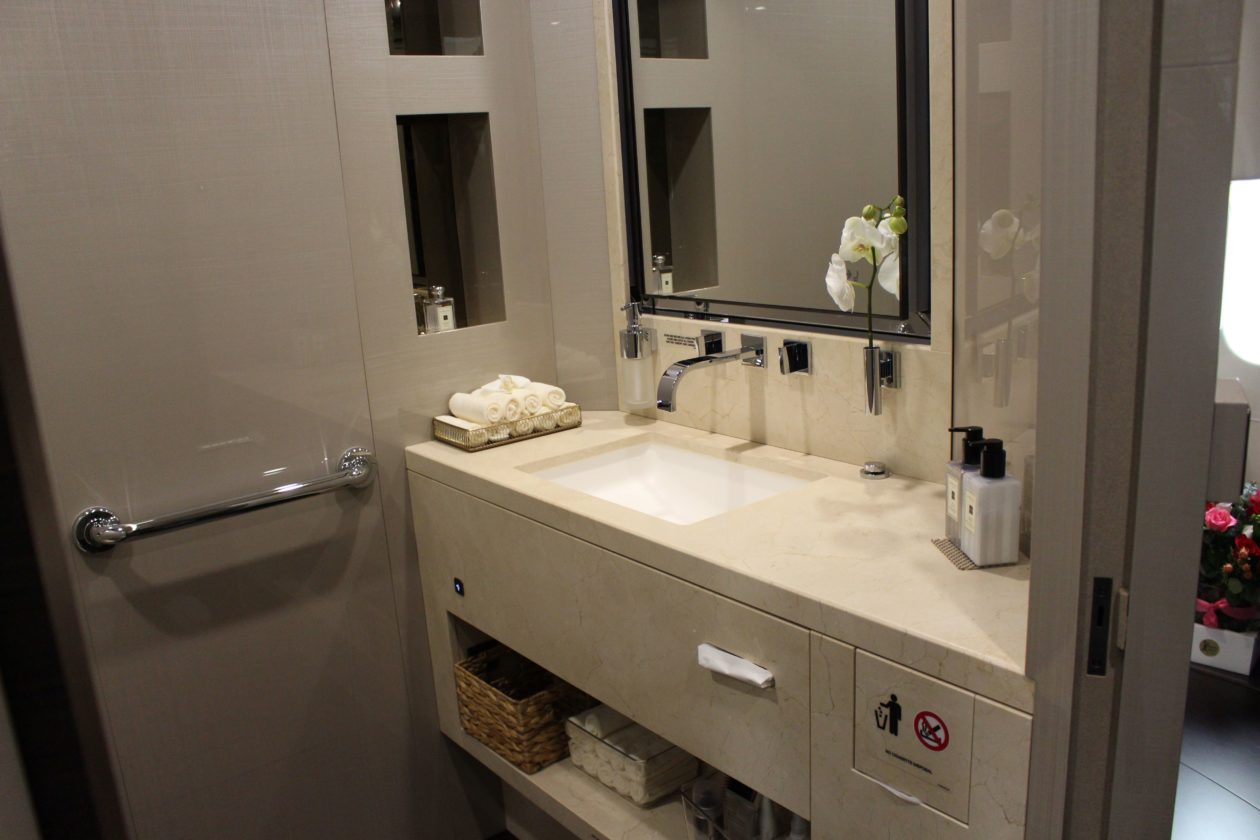 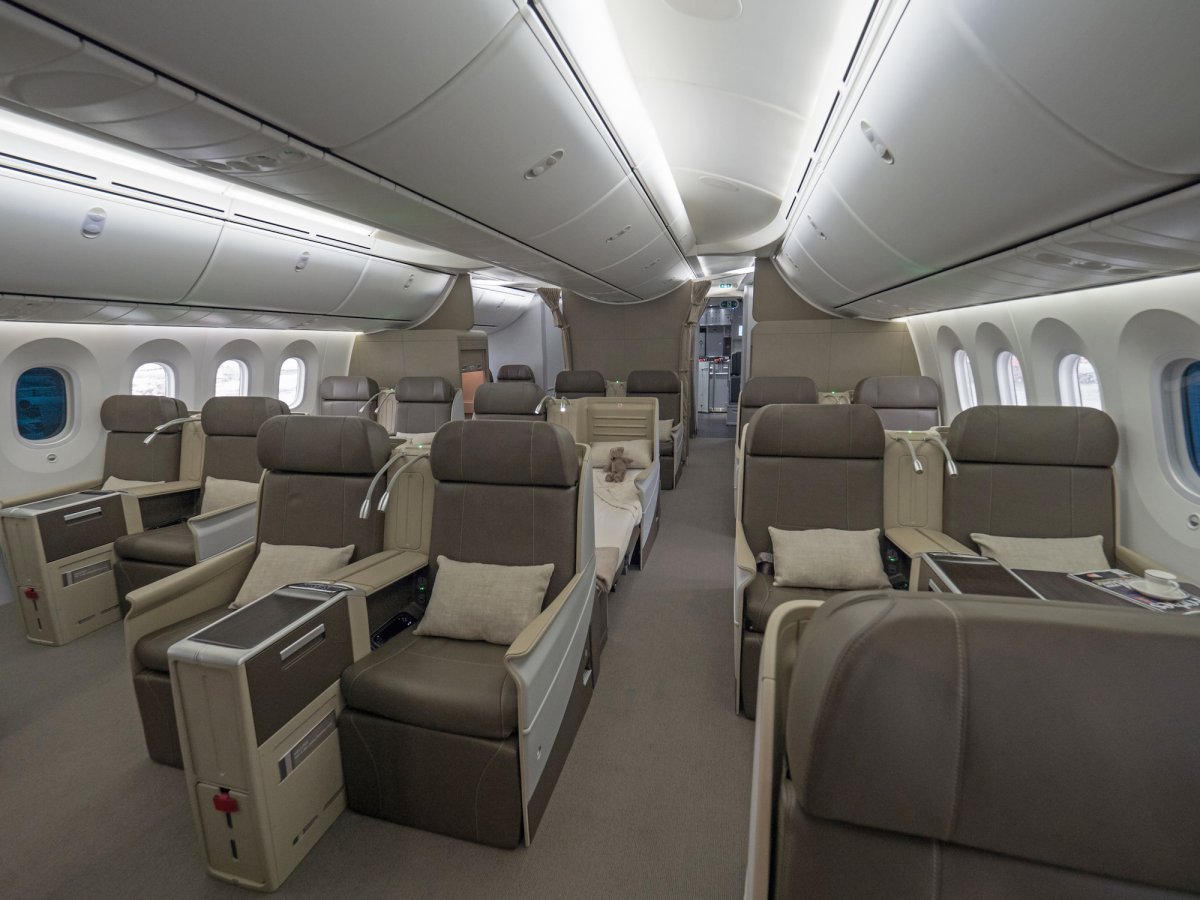 Toward the back of the plane, the seating is similar to business class. (GeekWire Photo / Chelsey Ballarte) 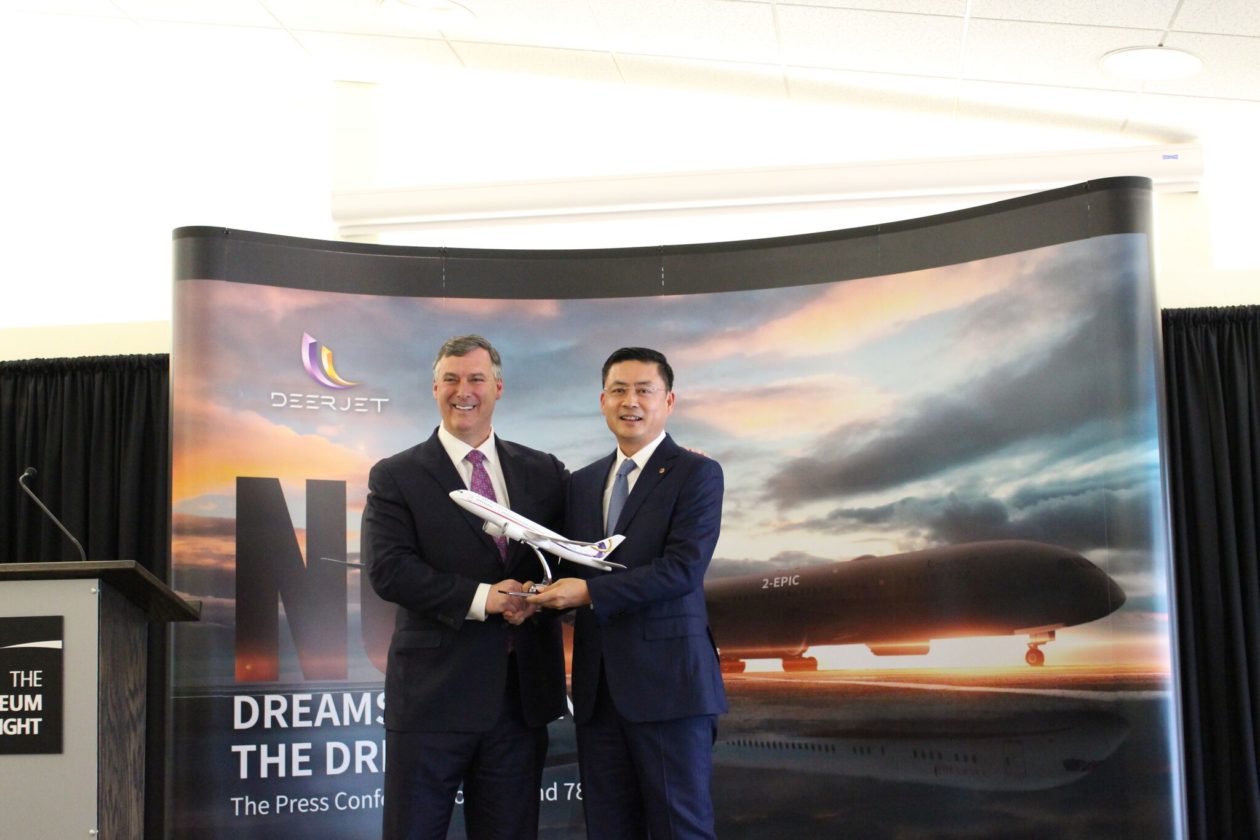 Kevin McAllister, president and CEO of Boeing Commercial Airplanes, has a photo op at the Museum of Flight with Adam Tan Xiangdong, CEO of HNA Group.

The 787 business jet was specially outfitted by Kestrel Aviation Management, with assists from Pierrejean Design Studios and Greenpoint Technologies. The plane has a range of 9,800 miles, and although it’s officially based in Hong Kong, it’s been hopscotching the world since it entered service last September.

“We don’t really have a base,” flight attendant Jessie Pan said. “We just fly everywhere.”

Lately, the 787 Dream Jet has been making its way around the world on a publicity tour, with stopovers in Shanghai, London, Dublin, Doha and now Seattle. During Tuesday’s news conference with Boeing executives, HNA’s Tan said Morocco would be the next stop on the “Dreams Encounter the World” tour.

“Actually, I pay a lot of money to do the advertising for Boeing,” Tan joked.

And speaking of money, Tan had still more good news for the plane’s manufacturer.

“We are going to buy a second one,” he said. “The second one can provide even more service for our high-end customers.”

Correction for 8:50 p.m. PT May 19: A previous version of this report placed Doha in the United Arab Emirates rather than Qatar, where it belongs.