We were overwhelmed by the quality and diversity of submissions from cities all over the country, eager to land GeekWire HQ2 for the month of February 2018. We’ve been collecting responses to our Request for Proposals (RFP), as we seek a location for this project, where we’ll cover the community’s technology scene, including its challenges and opportunities, innovations, leaders and its outlook on the future. We’ll also take this opportunity to evaluate the winning city’s chances of landing another iconic Seattle company seeking a second home.

Cities in the north, south, east, and west reached out to tell us about their emerging startup scenes, universities, and lifestyle perks, evidence of a true “rise of the rest” that expands far beyond the traditional tech hubs.

We learned why Phoenix has become a popular location for big tech satellite offices, that Denver has its own version of “unicorns,” and that Madison and Seattle have more in common than you might think. Plus, we got to watch this truly epic video from St. Petersburg:

The quality of these submissions means picking just one city for our temporary second headquarters won’t be easy.

GeekWire will locate one reporter in the chosen city for the full month of February and give the rest of our staff the opportunity to choose between our hometown of Seattle and HQ2. Our reporters will produce written stories, photos, videos, social media, and more content that will introduce readers to the innovative companies, entrepreneurs, organizations, and other leaders contributing to the chosen region’s growth. We will make our final site selection and public announcement in December.

Continue reading for highlights and images from the proposals we received. Want to help us make our decision? Share your thoughts with us in the comments.

Home to the headquarters of Kroger Co. and P&G, as well as an emerging startup scene, Cincinnati, Ohio pitched GeekWire on the potential for great tech stories and low cost of living. Queen City’s fastest-growing companies are in logistics and transportation, financial services, construction, insurance, engineering, advertising and marketing, and health. 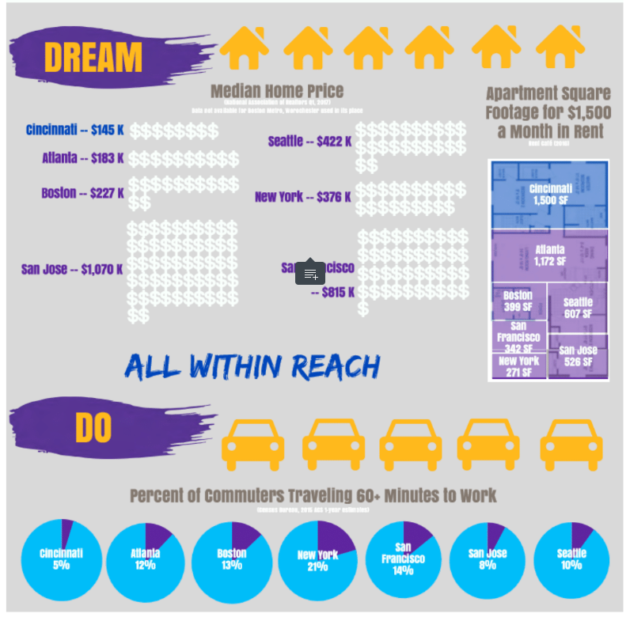 The proposal came from Cintrifuse, a public-private partnership that aims to build out the city’s tech economy. This proposal definitely wins the most cute points, for including Fiona, a hippo who was born six weeks early and captured the hearts of locals by overcoming early struggles. Fiona is so beloved that she has become the namesake for a specialty beer, a brand of cookies, and a children’s book.

Much of what we love about Seattle, home to GeekWire HQ1, can also be found in Denver, Colorado from all of that greenery to plenty of opportunities to get outside. Denver, and its nearby sister city Boulder, are home to tech companies big and small, including Galvanize, Stack Overflow, and Craftsy.

The city’s tech scene even has its own lingo; a group of entrepreneurs calls their growing startups the “Denver Gazelles,” presumably taking a more modest monicker than the billion-dollar private companies that call themselves unicorns. In the proposal, Denver offered GeekWire space in the Commons on Champa, a downtown innovation hub created by a public-private-nonprofit partnership.

Madison, Wisconsin is another city with some surprising similarities to Seattle: It has a vibrant gaming industry, it is the only other major U.S. city built on an isthmus, and it is home to the other UW. The University of Wisconsin-Madison generates a strong talent pipeline, which is one reason that Google, Amazon, and Zendesk have satellite offices in Madison. The college town is relatively small, with about 250,000 residents, which Madison says “is an asset for our tech ecosystem because the ‘high density’ of individuals means that it is easy to interact with people across the local tech community.” 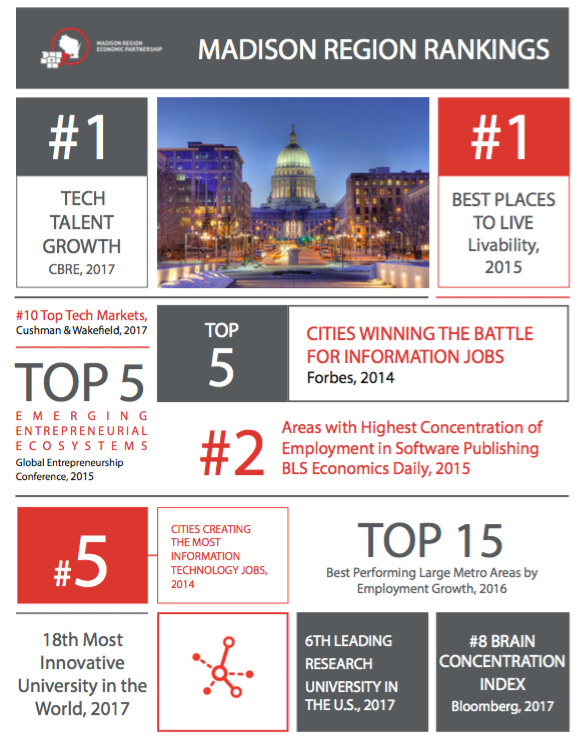 Madison is home to 35 gaming studios, including Raven, the developer behind Call of Duty. The city’s pitch also includes a low cost of living and a long list of community leaders to profile, including the University of Wisconsin team competing in SpaceX’s Hyperloop Challenge. 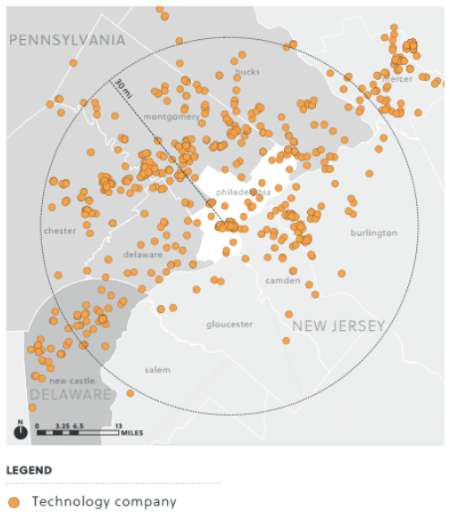 Leading institutions of higher education, like the University of Pennsylvania and Drexel, churn out tech talent and incubate startups. They also produce an engaged community of young people. An organization called Young Involved Philadephia has more than 7,000 members dedicated to community engagement and city issues, according to the proposal.

Companies like Yelp, Uber, and Amazon have established big outposts in the Phoenix region, and that’s no accident, city officials say. They “all have expanded to the Greater Phoenix region because of the favorable business environment, easy access to top markets and a robust pipeline of talent from the state’s higher education institutions,” according to the city’s proposal. The region also has homegrown startups, like OfferPad and CampusLogic. 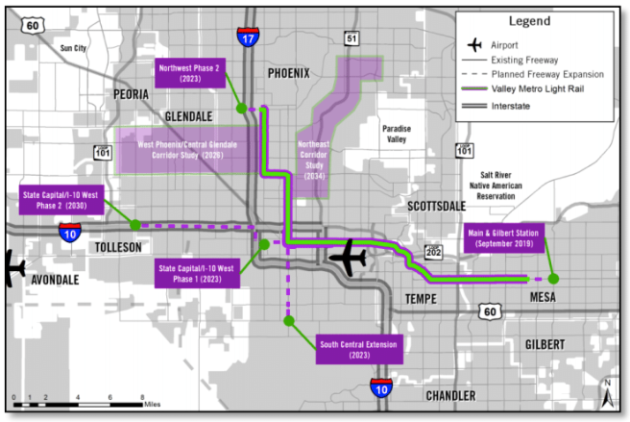 Carnegie Mellon’s School of Computer Science submitted a proposal on behalf of Pittsburgh, touting the city’s renaissance as a tech hub, satellite offices of big tech companies, and pioneering of autonomous vehicles. Those are just a few examples that show this underdog city is emerging as a worthy contender in the technology and engineering industries.

Pittsburgh’s historic cultural institutions and parks feature in the proposal, as does the natural landscape of rivers and hills. Discounted housing and collaboration with local media are also part of Pittsburgh’s play for GeekWire HQ2.

Raleigh, North Carolina is home to a strong mix of universities, startups, and established tech companies. Citrix and Red Hat call Raleigh home and they are investing millions in a $1.1 billion effort to transform the city’s downtown business district. Raleigh is also home to startups, like drone company PrecisionHawk, as well as the University of North Carolina at Chapel Hill, Duke, and North Carolina State. 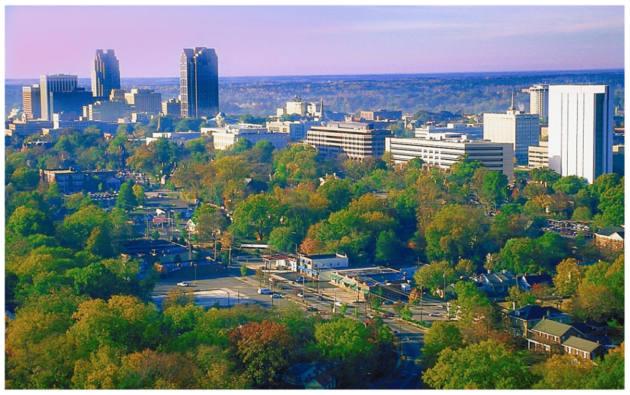 Raleigh has included a handful of co-working spaces and accelerators that could house GeekWire HQ2. The city is home to more than 500 startups and 14 accelerators.

Sacremento boasts “the most cost effective entry point to the most innovative economy in the world,” as the California capital is about a two-hour drive from San Francisco. According to the pitch, Sacramento is 46 percent less expensive than Seattle and the city is investing $3.6 billion to develop its urban core. 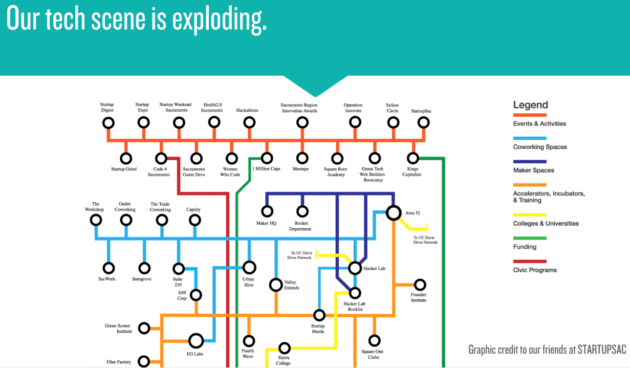 Sacramento’s proposal includes offices in Urban Hive, a coworking space that also houses Eventbrite, Pandora, and the TED Conferences. The city is also touting its professional sports teams, wineries, and other lifestyle benefits.

St. Petersburg, Florida, really pulled out all the stops in its submission, creating the awesome video below:

St. Pete’s pitch centered around its lifestyle perks — like hiking, biking, and beaches — and a young, skilled workforce. Home to The University of South Florida St. Petersburg, Eckerd College, and others, the proposals says “students often fall in love with the area and decide to stay.”

As for the tech industry, St. Pete says entrepreneurs see the Tampa Bay region as “uncharted territory.” The strongest growth is in the fin-tech space, with startups like The Penny Hoarder and Intrinio. The city is also home to The Poynter Institute, a global journalism organization that houses the International Fact-Checking Network.

The nation’s capital pitched GeekWire on its cultural institutions, growing tech hub, and inclusive policies that elevate women and minorities in business. D.C. is a busy metro in close proximity to major airports, with several top universities like Georgetown and George Washington. 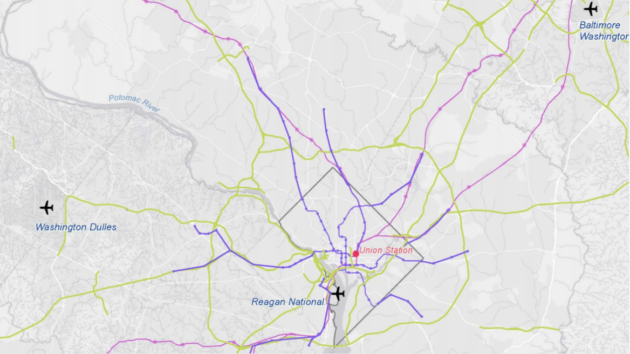 Other highlights from the proposal include D.C.’s walkability, affordable housing, public transportation, and retail and dining.