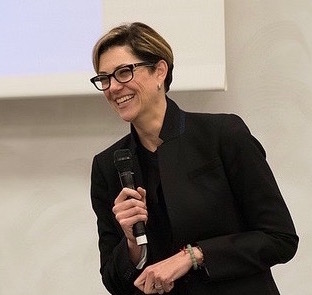 If you’re a large enterprise company, what’s the biggest benefit of moving to the cloud now? Maybe then you’ll still be in business in five years.

Abby Kearns, executive director of the Cloud Foundry Foundation, watches large companies struggle to understand this reality ever day. Years and years of investment into their own technology infrastructure leaves these companies with generally outdated equipment and skill sets right as nimble cloud-native upstarts begin stealing their lunch.

“Just in the last few years, we’ve seen startups that are taking business away from incumbent large organizations,” she said. “It’s not like a full frontal attack against a competitor, it’s death by a thousand paper cuts.”

Kearns, who will be speaking at the first-ever GeekWire Cloud Tech Summit in June, believes that there’s little reason for non-tech companies to continue investing in on-premises infrastructure in hopes of getting an edge.

“For many of them, there’s a certain amount of investment in infrastructure and on-prem that is undifferentiated. That’s money you’re not investing in doing innovative things.”

Cloud Foundry is a platform-as-a-service that allows a company’s software developers to get up and running in the cloud without having to do all the heavy lifting themselves. Several large multinational corporations, such as Ford and Gap Inc., have used its software to start cloud projects and modernize their internal software development processes.

As such, Kearns sits in an interesting position between the leading cloud providers of the day and the big pockets of large enterprise companies. After building their businesses on the back of startups that never had any legacy infrastructure to worry about, Amazon Web Services and its competitors are increasingly courting the big dollars behind huge IT budgets at Fortune 500 companies with outdated infrastructure strategies.

Our recent conversation reminded me of Nicholas Carr’s essay “IT Doesn’t Matter,” which came out 14 (!) years ago and caused quite a stir among what was then the vanguard of the tech industry: the Wintel alliance and the PC/server vendors that depended on that alliance for innovation. While those companies sputtered and complained that Carr was laughably off-base, Amazon was building the infrastructure that would fulfill Carr’s prediction.

Just in the last few years, we’ve seen startups that are taking business away from incumbent large organizations. It’s not like a full frontal attack against a competitor, it’s death by a thousand paper cuts.

It’s not that technology has ceased to matter, clearly. Kearns’ point is that if everyone has access to the same technical capabilities, it makes no sense in 2017 to invest millions in the purchase and maintenance of technology equipment by companies whose primary mission is not technology.

A state-of-the-art data center won’t set you apart from your real competition, and it’s actually hurting your efforts to compete against younger companies with no technical debt that can focus solely on their mission. Kearns cited financial services as an example: Back when Carr’s essay came out, financial services companies spent as much money on technology infrastructure as any other segment of the economy. These days, there are dozens of fintech startups that run in the cloud and can spend all their time figuring out how to take small amounts of business away from the Fidelitys and Merrill Lynches of the world.

We’ll discuss opportunities for cloud companies to bring these old-line companies into the fold at the GeekWire Cloud Tech Summit in Seattle, and you should definitely attend. The event will be held June 7 at the Meydenbauer Center in Bellevue, and more information, as well as a link to buy your tickets, can be found here.