Judging by one of the company’s slogans — “AI in all” — it’s clear that Chinese tech powerhouse Tencent sees giant potential for artificial intelligence.

Tencent, maker of the popular WeChat app, is betting big on AI, and the company’s decision to open an AI research lab in the Seattle area is another example of this.

The lab, located on the sixth floor of the Plaza Center tower in Bellevue, Wash., is not quite open yet — GeekWire stopped by this week and saw construction ongoing. But Tencent already has 20 researchers in the area working on AI-related services and products. They will soon move into the permanent space and there are plans to grow the workforce. Tencent will also launch an “Explorers” program that sponsors Seattle-area graduate students to work with the company and its technologies.

Tencent is the latest out-of-town tech company to open an engineering office in the Seattle region to mine the city’s rich talent pool; other Chinese tech titans like Baidu and Alibaba have hubs in the area, where global leaders in AI like Amazon and Microsoft are also headquartered.

Dr. Dong Yu is heading up the new lab for Tencent. He spent the past two decades at Microsoft Research and was part of a team that found a major breakthrough in speech recognition last year. Microsoft itself is also investing heavily in AI; last year it formed the Microsoft AI and Research group as a fourth engineering division at the company.

We sat down with Yu to learn more about Tencent and its AI strategy. Tencent is one of China’s largest companies with industry-leading products and services that span across messaging, video, gaming, payments, music, healthcare, education, maps, and much more. Chinese consumers spend more than 55 percent of their mobile internet usage on Tencent-owned platforms, the company said in September. There nearly 1 billion monthly active users on WeChat, one of the world’s most popular messaging apps that also acts as a payment platform and social media network.

Tencent is probably one of the best companies that has application scenarios for AI technologies.

Tencent could be compared to Facebook or Amazon, but it doesn’t have a clear-cut U.S. equal.

The researchers in Bellevue will focus mainly on speech recognition systems and natural language processing, Yu said. The work being done will apply to a bevy of Tencent’s existing and future products, whether for WeChat’s voice-to-text feature or software for a smart home. 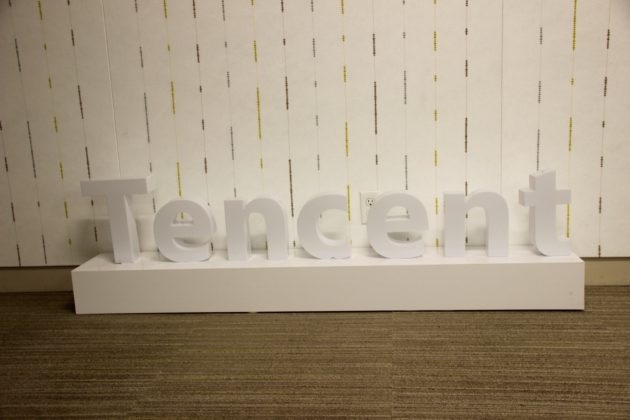 Yu, who was recently honored by the Association for Computing Machinery, said Tencent’s vision for AI is that it should be a “powerful tool to enhance all kinds of products.”

“Tencent is probably one of the best companies that has application scenarios for AI technologies,” he added.

Yu noted that AI research has been around for decades, but only recently has the combination of more powerful computing and larger sets of data enabled actual use cases for everyday consumers.

Asked about concerns for the potential negative impact of AI on society, Yu said that benefits will outweigh downsides. He admitted that AI will replace jobs, but said people will be trained to do something else where they can “get higher pay and a better working environment.”

Tencent, which has a higher market capitalization than Facebook, recently opened a separate AI lab in its hometown of Shenzhen, China. The company, which has 70 total AI researchers and 300 AI research engineers around the globe, launched a voice assistant in June similar Amazon’s Alexa or Microsoft’s Cortana, according to Tech in Asia. Tencent also last week released a report describing the global AI talent shortfall.