Amazon is beating out Google and other search engines as the first stop when people online shop.

That’s according to a UPS survey of about 5,000 online shoppers conducted in the first quarter of this year. Twenty-nine percent of respondents said they begin looking for products on Amazon, compared to 15 percent who said search engines, like Google, are where their product searches begin. 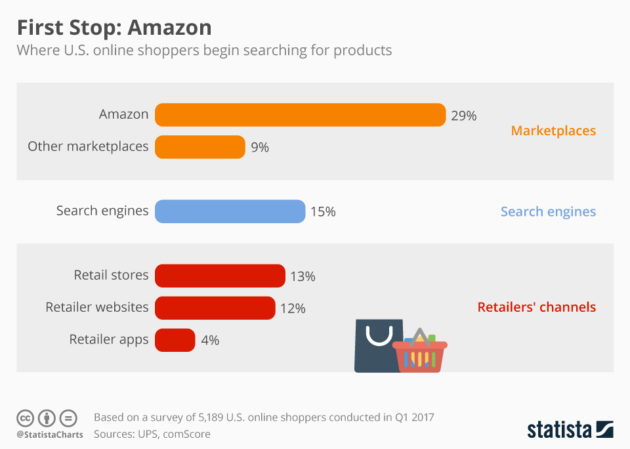 The findings give weight to a defense Google gave before the European Union’s regulatory arm fined the search giant $2.7 billion last week. The EU found that Google broke antitrust rules by favoring its comparison shopping service in search results over other similar services. Google disputed findings of the seven-year investigation, pointing to the rise of Amazon as proof that competition was alive in the comparison shopping space.

With its comparison tools, reviews, millions of retailers, and vast range of products from sneakers to groceries, Amazon is a formidable competitor and has become the first port of call for product searches. And as Amazon has grown, it’s natural that some comparison services have proven less popular than others. We compete with Amazon and other sites for shopping-related searches by showing ever more useful product information.

The UPS study shows a reversing trend from multi-channel to single-channel online shopping. The number of shoppers looking for products across multiple channels increased by two percent between 2015 and 2016 but now we’re seeing more shoppers search just one platform, like Amazon.

“This could be attributed in part to the fact that online shoppers have become more seasoned at searching and finding what they need via a single channel,” the UPS study says. “By understanding the distinct strengths and limitations of each channel, they can make informed choices while having a more efficient shopping experience.”