Trending: Redfin lays off 7% of staff, furloughs hundreds of agents due to COVID-19 impact on housing demand
Sponsored by 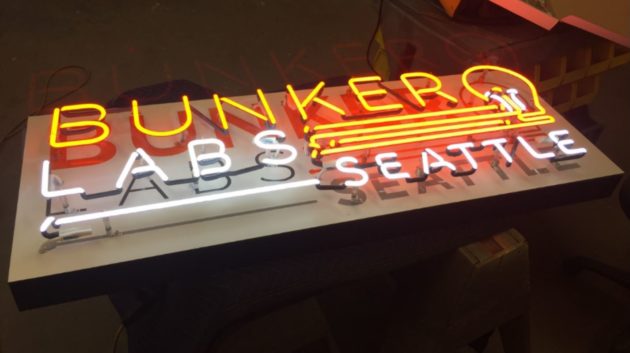 Not everyone has the work ethic to be an entrepreneur — the long hours, the commitment, the need to focus on the long game.

But Travis Stanley-Jones thinks one segment of the population is particularly well suited to the startup grind: military veterans.

Veterans’ openness to “putting in the work for minimal pay with a long-term perspective makes veterans a better bet,” said Stanley-Jones, who served with the U.S. Marine Corps for six years in the reserve, active duty and officer training.

And now there’s an organization that’s ready to help military veterans in Washington state who are eager to try their hand in business. Bunker Labs recently set up shop in the University of Washington’s CoMotion Labs @ Startup Hall. The organization received $100,000 from Comcast NBCUniversal to launch the local effort. The goal of the nonprofit is to help people transition out of the military and into entrepreneurial jobs in the private sector.

Bunker Labs is a “one-stop shop where people can come and find the right resources,” said Johannes Schonberg, a co-founder and executive director of the Seattle chapter. Schonberg served in the U.S. Navy.

Bunker Labs was founded in Chicago and has chapters nationwide. Seattle is number 15 and its newest location. Schonberg says this site could be the group’s most successful location given the innovative startup culture and numerous military installations. There are approximately 600,000 veterans in the state and 16,000 service members transitioning out of the military, he said. Bases include the Everett Naval Station located north of Seattle and Tacoma’s McChord Air Force Base.

Many service members enter the military directly from high school, Schonberg said. They learn important “soft skills” including professionalism, being on time and accountable, persevering in difficult tasks, teamwork and the ability to adapt and pivot their focus. But at the same time, the service is deeply hierarchical in structure and with orders handed down by superiors.

“You have a lot of entrepreneur aspects, but overall it’s a 1950s culture,” Schonberg said.

“We’re trying to marry those soft skills with the hard skills of entrepreneurship to make sure they’re successful in their entrepreneurship journey,” added Jake Tozier, another co-founder, Seattle’s program director and a U.S. Army veteran.

Bunker Labs provides desk space and helps connect veterans with mentors, financial resources and other veteran entrepreneurs and business people. With their location at CoMotion Labs, veterans have the opportunity to mingle with other entrepreneurs and see how the process works. The group can also help prod veterans needing guidance, supporting them in informational interviews and networking, and making sure they’re following through needed steps in developing a business.

Bunker Labs is hosting expert roundtables. They’re organizing a series of evening classes to walk people through the startup process, including practicing pitching to potential investors. There are monthly “bunker brews” for networking and socializing.

Stanley-Jones met with the Seattle co-founders a couple of months ago and is ready to help with networking. “I do have a soft spot for the military and I love entrepreneurship,” said Stanley-Jones, who for 10-years has owned Mulleady’s, an Irish bar in Seattle’s Magnolia neighborhood.

Last year he took the plunge into the tech sector, launching Umami Jobs, a site for businesses and workers in the restaurant and bar industry to find employees and jobs through video posts.

We’re working to transform that narrative from the broken veteran to the empowered veteran.

He likes what he’s seen with Bunker Labs — though he approached their effort with some skepticism.

“Entrepreneurship is super popular and it’s a snake oil that lots of organizations sell,” Stanley-Jones said. Companies market entrepreneurship as a straightforward way to make a ton of money — which is a gross misrepresentation.

“Bunker Labs was in no way promoting that type of stuff to military veterans,” he said.

In addition to helping veterans explore their ideas for starting businesses, the nonprofit also hopes to give a more accurate representation of veterans. Too often attention focuses only on homeless or troubled veterans, ignoring the successful, well-adjusted majority, the co-founders said.

“We’re trying to change the stereotypes,” Schonberg said, the idea “that we all are broken, that we all have [Post-Traumatic Stress]. We’re working to transform that narrative from the broken veteran to the empowered veteran.”

Bunker Brews are scheduled for April 13, June 8 and July 13. Contact Bunker Labs for locations and more information, or check their Facebook page. On May 5, Bunker Labs celebrates its launch at the UW’s Startup Hall from 11 a.m-12:30 p.m. That afternoon they’re hosting their “Muster,” an event at Impact Hub from 1:30-7:30 p.m. showcasing veteran entrepreneurs.

Editor’s Note: Article updated April 20, 2017 to include information on the donation provided by Comcast NBCUniversal to launch the local effort.