EVERETT, Wash. — With the rat-a-tat-tat of a robotic riveter, Boeing celebrated the official kickoff for production of its next-generation 777X wide-body jet.

Today’s ceremony brought more than 200 Boeing workers (plus a busload of journalists) to the building where the support structures for the 777X’s carbon composite wings are being assembled.

The climax of the celebration came when a laser-guided robotic arm drilled a hole into the carbon fiber layer for a 105-foot-long wing spar and its stiffener, and then loudly installed the first fastener.

Workers greeted the noise with applause.

“We’re turning the chapter,” Jason Clark, vice president of 777 and 777X operations, told the crowd. “This is a change in the history of how we manufacture, how we assemble and how we fly our aircraft.”

The 777X production process builds upon lessons learned from the 787 Dreamliner program, which has shifted Boeing toward greater automation and wider use of lightweight carbon fiber for components.

“This is four years of work, really focused energy from the team, to get to this point,” Clark told reporters after the ceremony.

Boeing’s two 777X variants, the 777-8 and 777-9, are designed to carry between 350 and 425 passengers. That stretches well beyond the 396-seat capacity of Boeing’s biggest current-generation 777. The new jets are expected to be 20 percent more fuel-efficient as well.

The 777X’s 235-foot wingspan is so wide that each wingtip has an 11-foot-long section that’s built to fold upward, just in case extra clearance is needed at small airports.

In the four years since the 777X was announced, Boeing has received 340 orders and commitments for the planes — including 20 planes that are part of a $13.8 billion Singapore Airlines deal signed today at the White House.

President Donald Trump said the deal should create as many as 70,000 jobs in the U.S. “Otherwise we’ll cancel the order,” he joked. (It’s not exactly clear where the president got that number, but it may relate to total employment at Boeing Commercial Airplanes, or perhaps to a job multiplier effect.)

Boeing already has done some test assembly work for the 777X, including work on a “static” airframe that’s being put together strictly for ground testing. In contrast, the spar that started going through the assembly process today will be part of the first jet to go through flight tests. 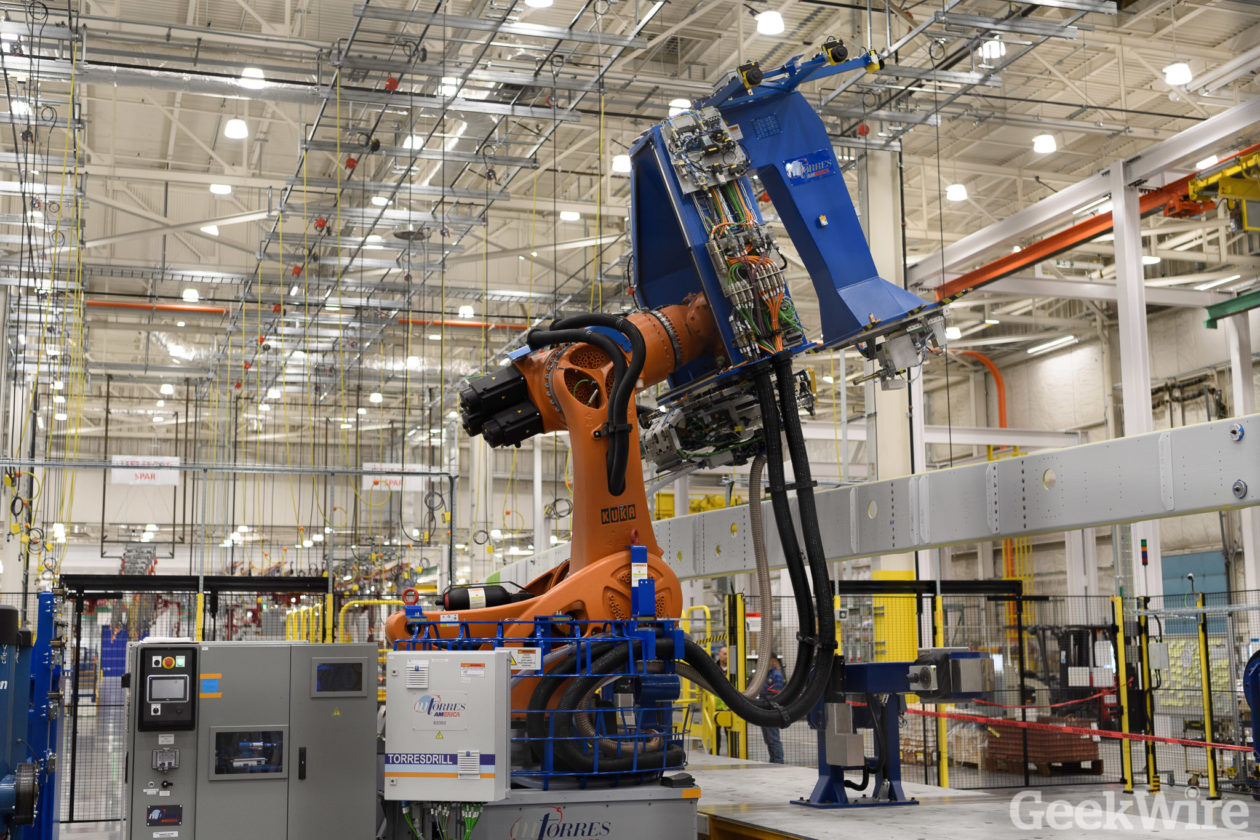 A spar assembly robot looms over one of the spars for the right wing of Boeing’s first flight-ready 777X jet. (GeekWire Photo / Kevin Lisota) 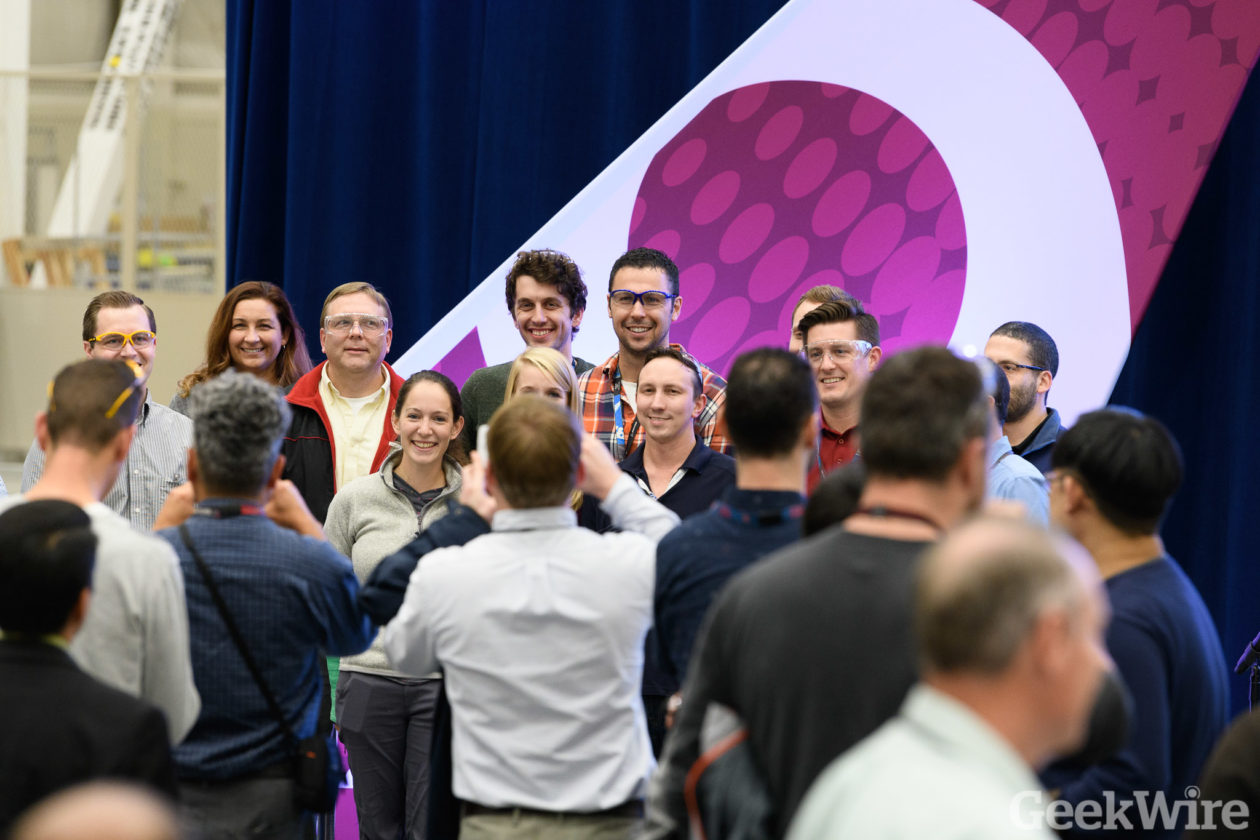 Boeing employees gather around a tail mockup for the 777X variant known as the 777-9. (GeekWire Photo / Kevin Lisota) 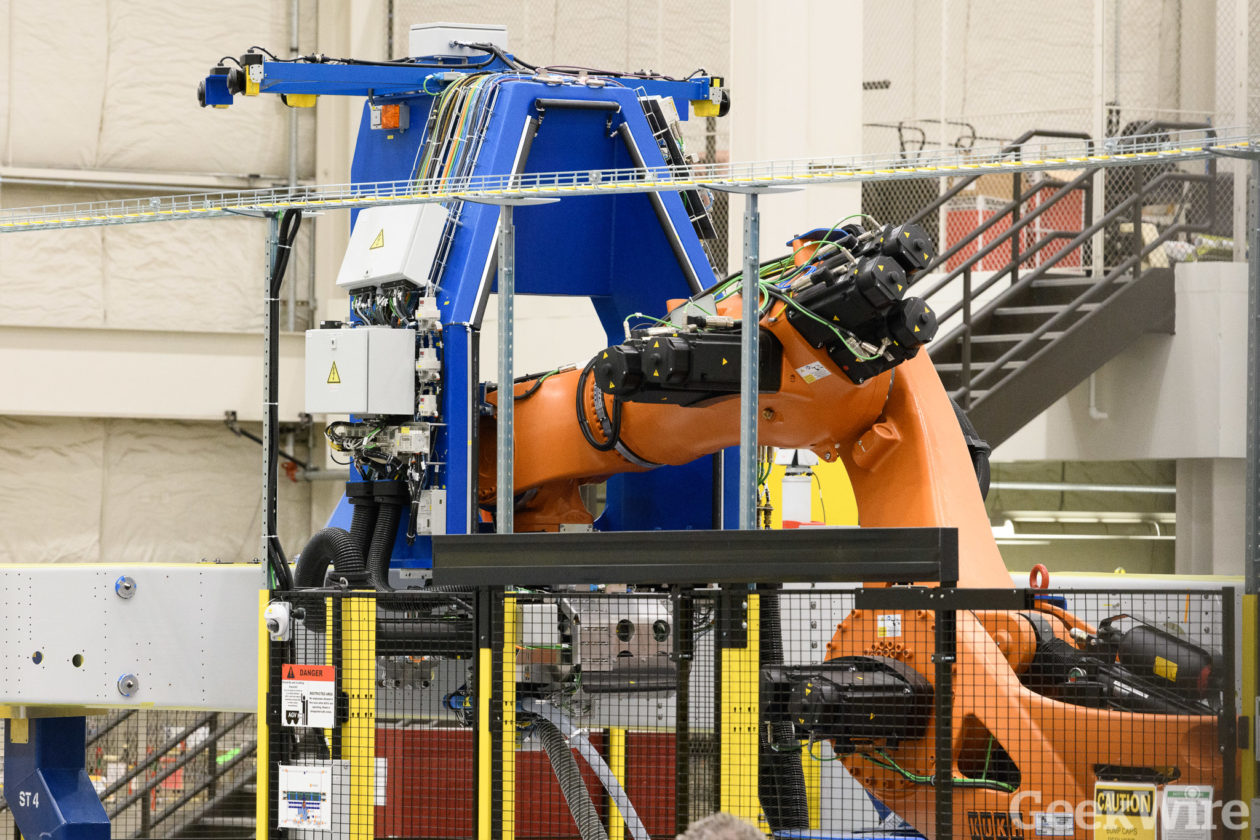 A spar assembly robot drills a hole in the carbon-fiber spar and its stiffener, then installs the first fastener. (GeekWire Photo / Kevin Lisota) 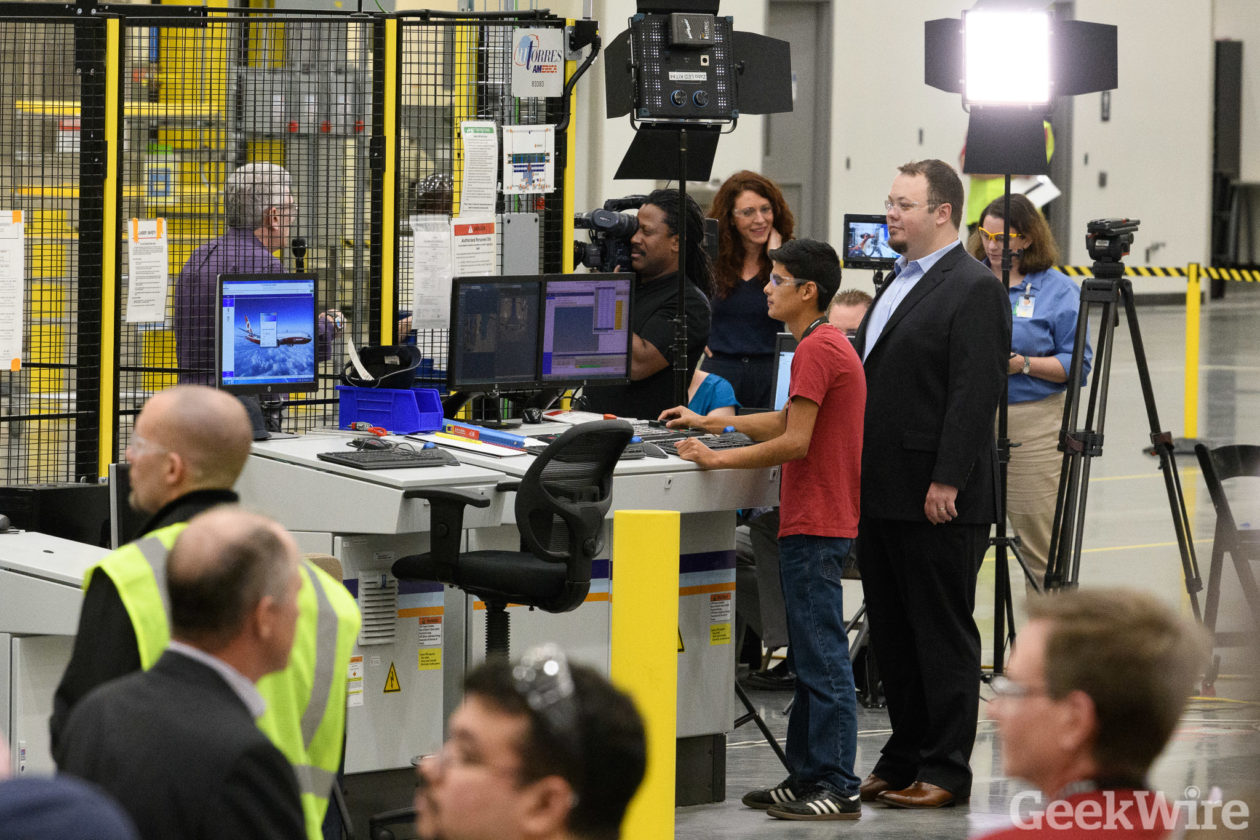 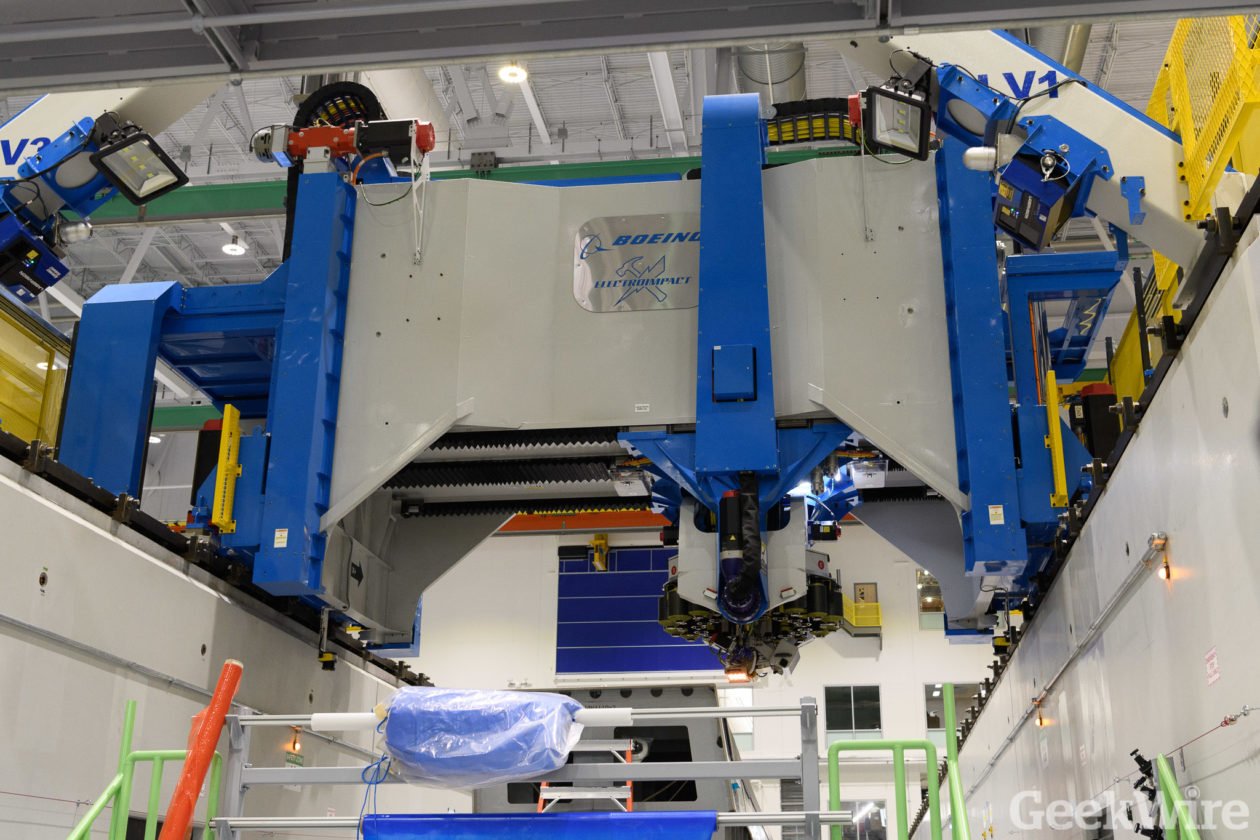 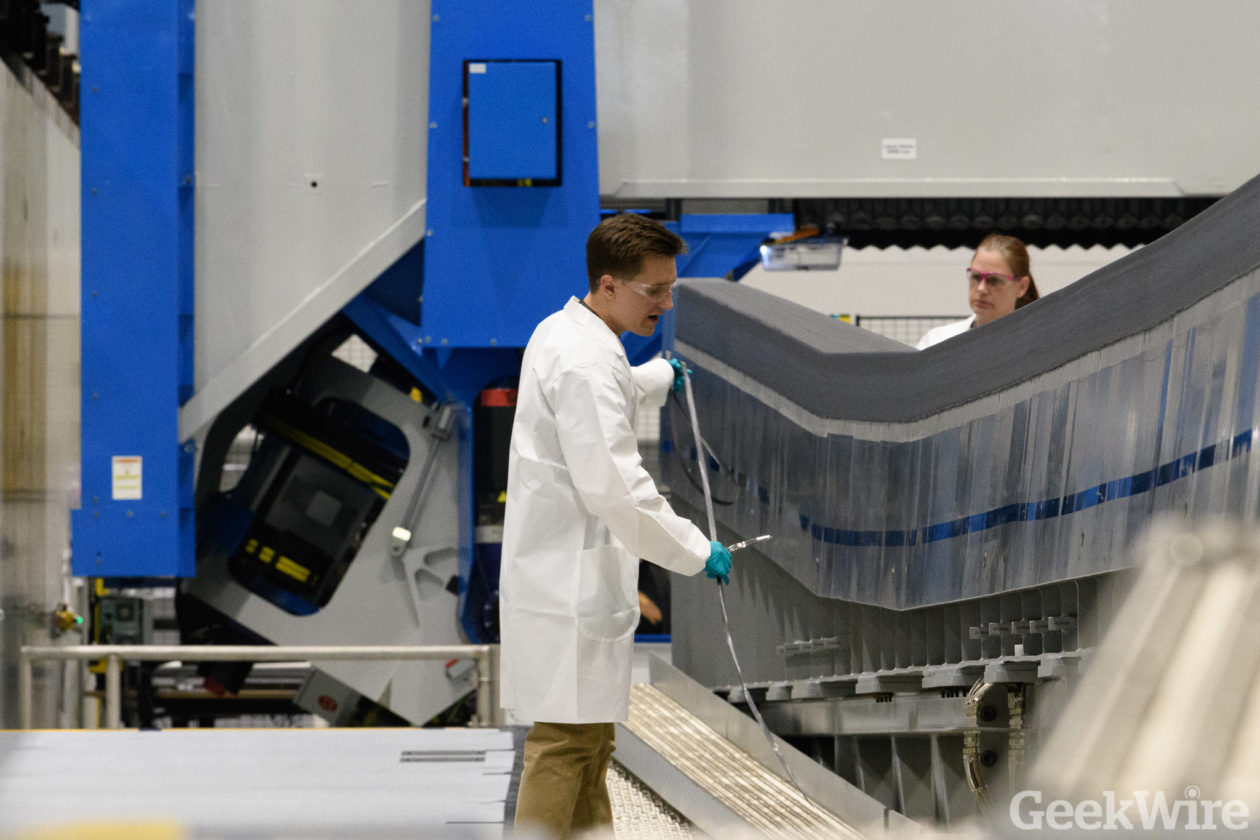 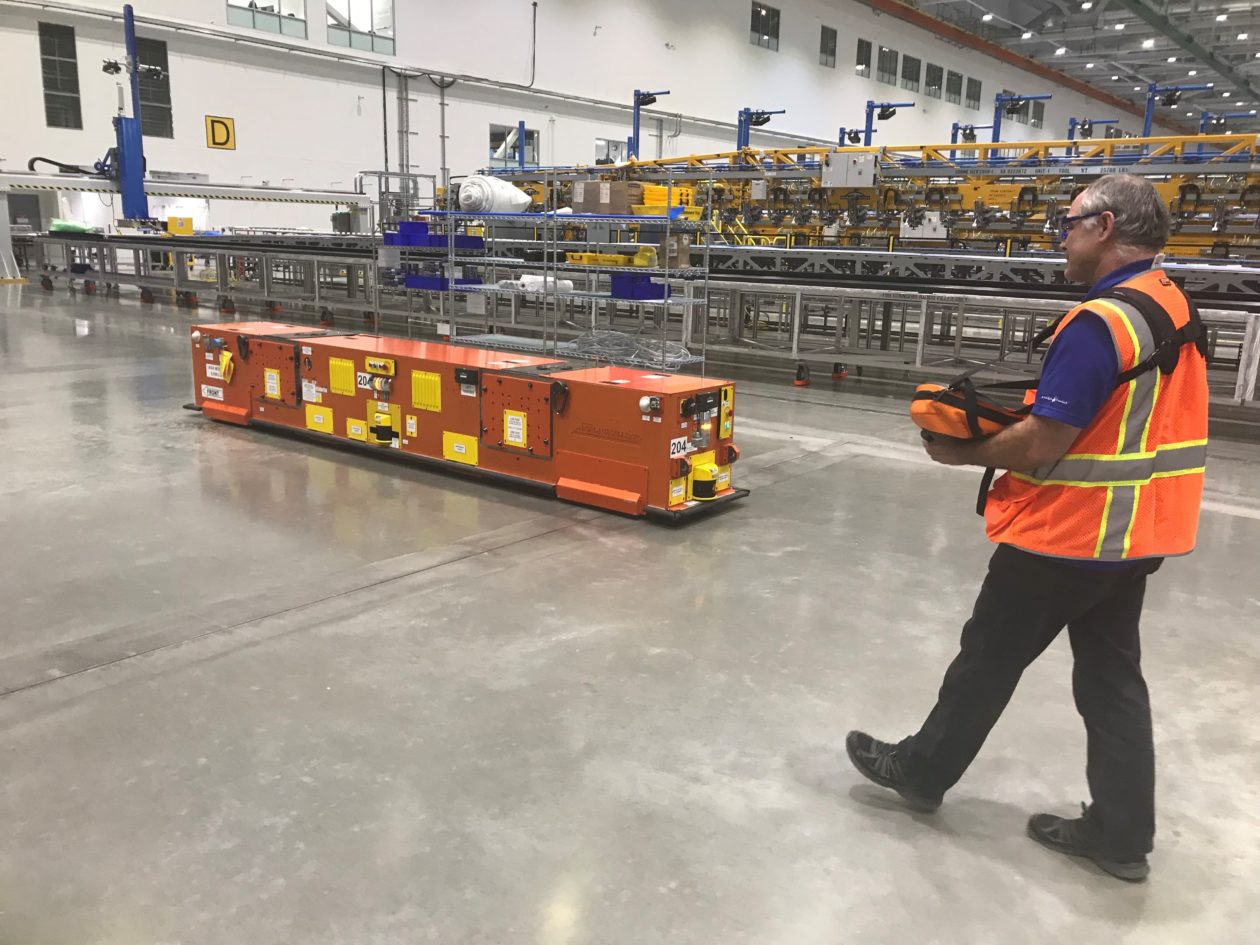 Boeing operator Dean Pierce uses a control tablet to keep an automated guided vehicle, or AGV, on track as it moves tools from one location to another in Boeing’s Composite Wing Center. (GeekWire Photo / Alan Boyle) 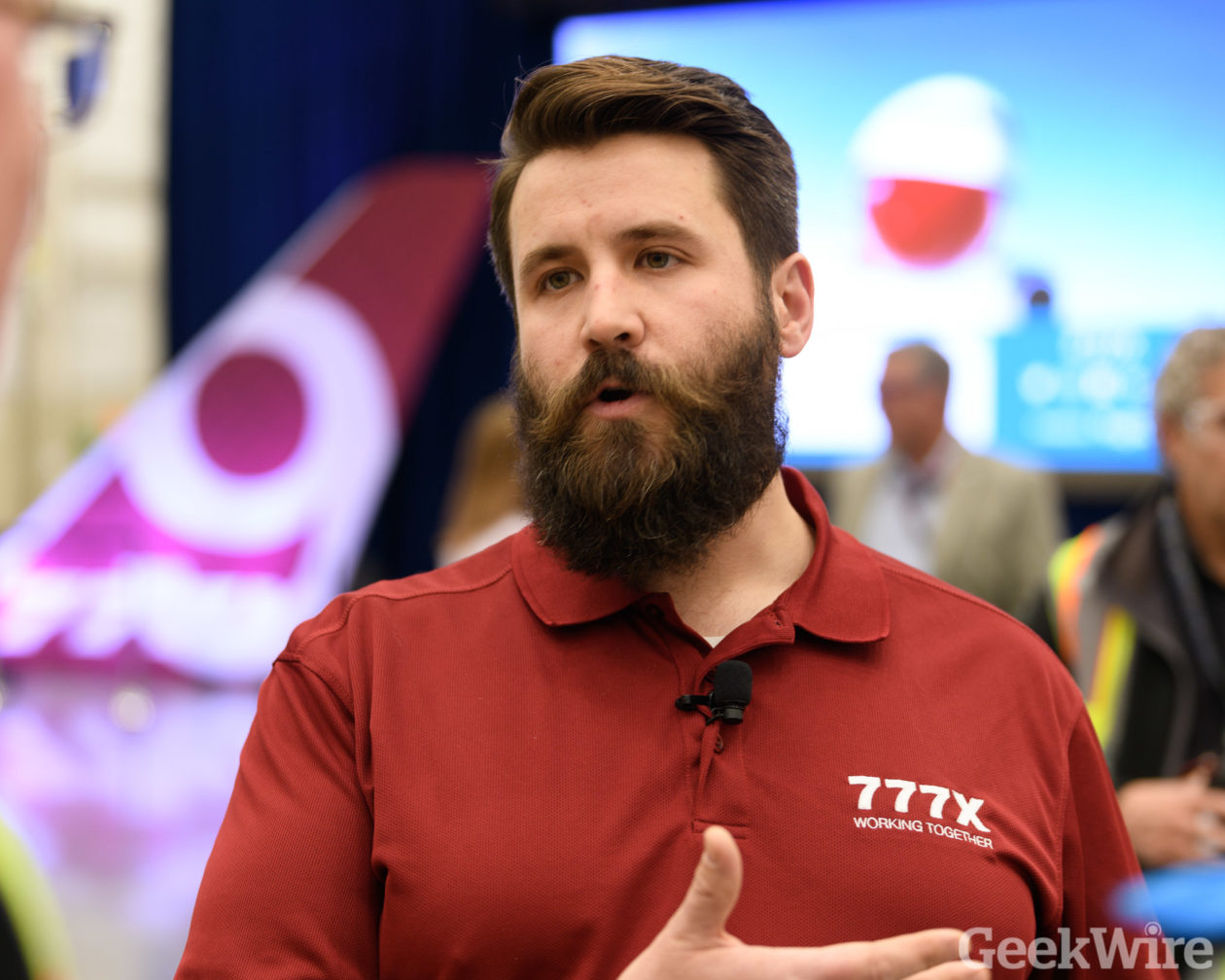 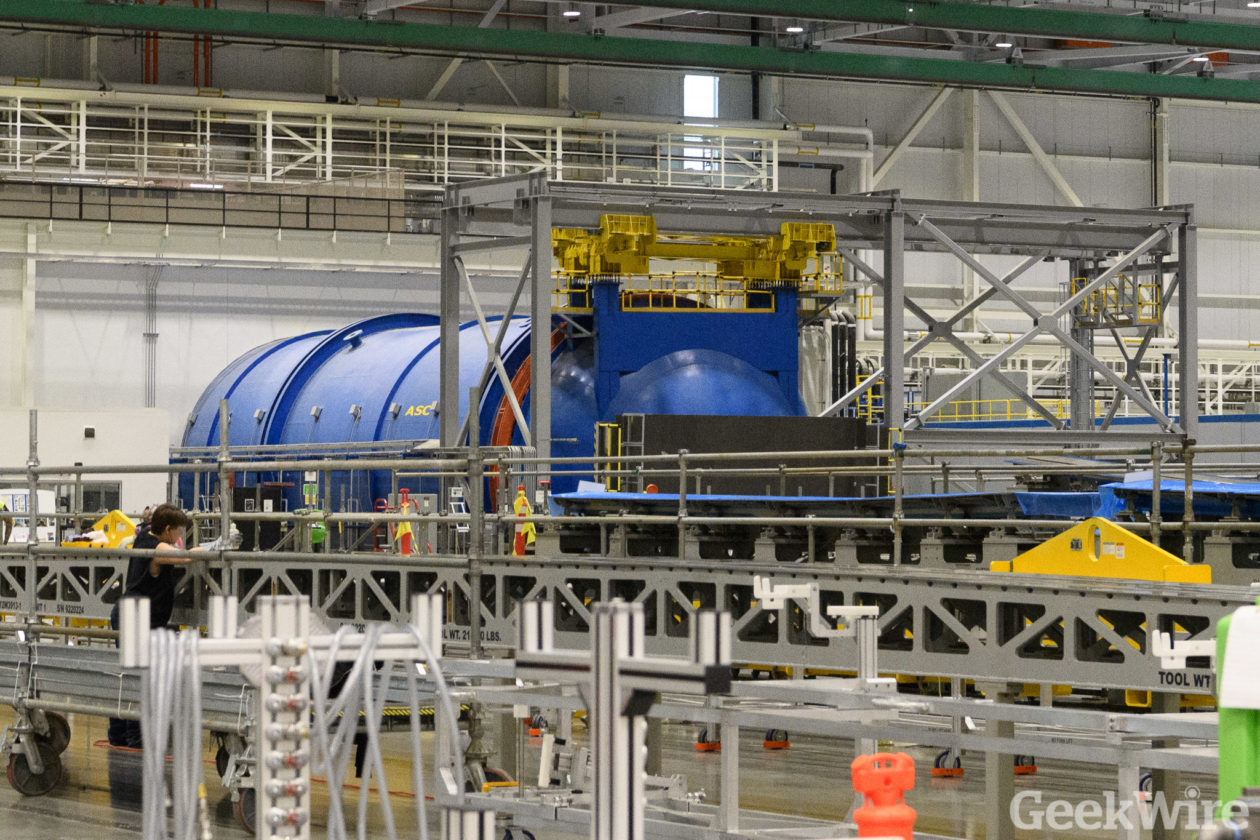 After the wing spar has been built up from layers of resin-impregnated carbon fiber, it is “cooked” in a giant blue autoclave to finish the fabrication process. (GeekWire Photo / Kevin Lisota) 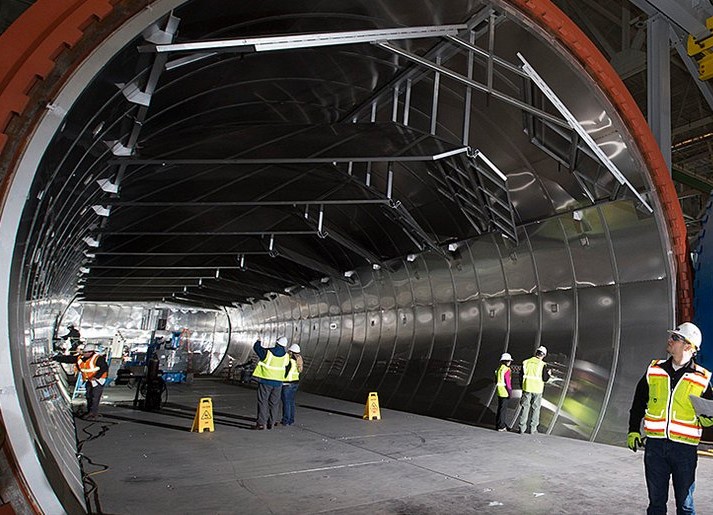 The 777X is bigger than the 787 Dreamliner, but it picks up on a lot of the technologies pioneered by the smaller plane, ranging from wider windows to a common layout for the flight deck and the cargo handling system.

Boeing says it has improved the production process as well.

“The process is largely changed. … What these robots are doing is something different than we’ve done before. The way we’re locating parts is something we’ve not done before in this capacity,” said Boeing manufacturing representative Paul Clark. “It’s just kind of a reboot of the system from the ground up.”

Terry Beezhold, vice president and chief project engineer for the 777X at Boeing Commercial Airplanes, said the production process has also been made safer for the people building the plane.

“That’s really tough work to do, ergonomically,” he told reporters.

Read more: Find out what happens when robots team up with humans for Boeing’s 777X

The showcase for the upgraded production system is Boeing’s 1.3 million-square-foot Composite Wing Center, the billion-dollar facility where the carbon-fiber wing components for the 777X are being fabricated.

Even as the first official wing spar was getting its first fastener installed, another wing spar was taking shape inside an automated fiber placement machine at the Composite Wing Center. Perry Moore, who leads the integrated product team for the 777X wings, said they’re the largest single-piece spars ever produced.

The buildup to today’s kickoff wasn’t always easy. Boeing agreed to build the 777X in Everett only after securing $8.7 billion in tax incentives from Washington state, plus labor union concessions. Getting ready for production required a retooling of Boeing’s production processes, literally and figuratively.

“During those months of seemingly endless planning, it definitely seemed at times like we were never going to get to actually build this airplane,” Paul Clark said.

But he also said the changes put into place for the 777X have given the century-old company a new spring in its step.