The Amazon CEO took over the internet this past summer after a photographer snapped an image of Bezos struttin’ his stuff at an invite-only gathering in Sun Valley, Idaho.

The photo immediately turned into a viral meme.

"I sell books." versus "I sell whatever the fuck I want." $AMZN pic.twitter.com/j0TTnE7wFc

Former and current Jeff Bezos is literally the 'you vs. the guy she told you not to worry about' meme. pic.twitter.com/NNA2LlFxy8

The photo appeared during an on-stage interview earlier this month when Bezos was interviewed by his younger brother Mark at a Summit Series event in Los Angeles.

Mark Bezos noted how the photo confused him, given that his older brother didn’t always look so fit. “In all honesty, this is what I grew up with,” he noted. “When you guys saw ‘Swoll Jeff,’ I was surprised, too.”

Bezos admitted that his eating habits weren’t so good back when he was first getting Amazon off the ground.

For a couple years before Amazon launched in 1994, Bezos said he would eat an entire can of Pillsbury biscuits for breakfast each morning — with added butter. His wife finally stopped him one day and asked him to read the ingredients.

“I had never read a nutritional label in my life,” said Bezos, who noted that he was “skinny as a rail” at the time. “I ate what tasted good to me.”

Bezos’ wife, MacKenzie Bezos, helped put an end to his unhealthy breakfast routine and since then, the 53-year-old has gone through a physical transformation of sorts.

It’s been a gradual change — back in 2013, Brad Stone, journalist and author of The Everything Store: Jeff Bezos and the Age of Amazon, noticed that as Amazon grew, so did Bezos. Speaking at an event in Seattle in 2013, Stone shared a theory as to why the prolific entrepreneur was hitting the gym — it has to do with his space company Blue Origin.

“I definitely think he’s going to space. I think he wants to,” Stone said. “One sort of interesting physical transformation is that as Amazon has grown, Jeff is in pretty good shape now. He looked a little pasty and rumbled after the 90s, and now he’s clearly working out every day. And the reason I bring that up is that I think he’s in astronaut training.” 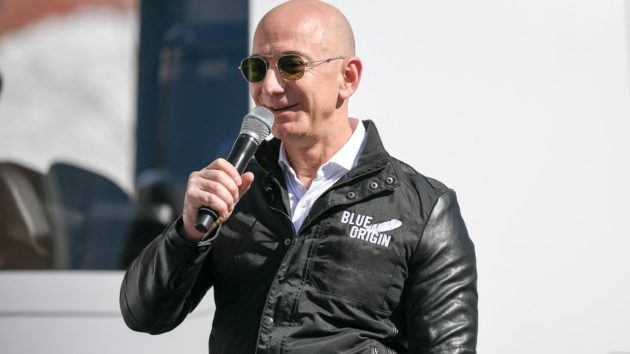 Bezos is a huge space nerd and self-proclaimed Trekkie — perhaps one of the few who launched his own rocket enterprise to make his space exploration dreams come true. He talked about Blue Origin during the chat with his brother this month.

And Bezos isn’t the only Amazon exec that has gone through a health and eating change. During a meeting with Whole Foods employees after Amazon announced that it was acquiring the grocer for $13.7 billion earlier this year, Amazon Worldwide Consumer CEO Jeff Wilke, who joined the company in 1999, recalled how he arrived in Seattle nearly two decades ago as a “meat-and-potatoes person from the East coast.”