When it comes to economic prosperity in America, a rising tide does not lift all boats.

Looking at national statistics, the U.S. economy has bounced back from the Great Recession but a detailed new report from the Economic Innovation Group (EIG), a Washington, D.C., think tank, shows that the recovery is almost entirely concentrated in a small number of prosperous communities. Those urban and suburban centers — many of which are buoyed by thriving tech industries — are educated and experience strong job growth. Outside of these communities, economic distress is pervasive, a phenomenon that significantly influenced the 2016 election. 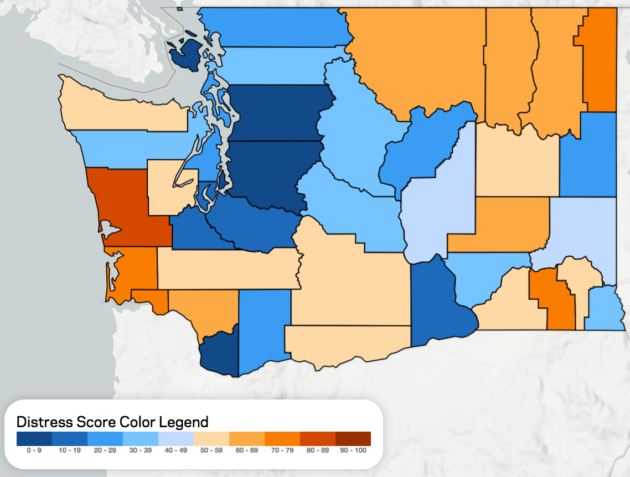 The trend is well-represented in Washington state. Seattle — which is the seventh most prosperous large city in the country based on EIG’s data — and its surrounding communities are considered prosperous. They have low rates of unemployment, a highly educated population, and residents invest wealth back into public services. But that prosperity is largely concentrated around the state’s denser metropolitan areas with thriving industry. Washington’s more rural communities are grappling with moderate to high economic distress.

Seattle’s prosperity is driven in-part by big, wealthy employers, like Amazon. The e-commerce giant’s relationship with its hometown is complicated but it has had an undeniable effect on job opportunities and wealth in the city. That impact is the reason communities across the country — many of them experiencing the economic struggles outlined in the EIG report — are vying to become Amazon’s second North American headquarters.

One in six Americans lives in an economically distressed zip code and a quarter of them are under 18, according to the report, which was first spotted by Axios. More than half of the country’s population living in distressed zip codes resides in the South, though Rust Belt cities and other communities with industrial legacies are also struggling.

“This trend represents a fundamental shift in the geography of economic growth in the United States,” the report says. “Geographic disparities have, of course, always existed in this country, but the prospects of different communities used to rise or fall together to a far greater extent than they do today.”

The report suggests that the number of new businesses established, changes in employment rates, and gaps in educational attainment are the leading factors for this growing opportunity gap between prosperous and distressed communities.

EIG studied seven key metrics from the U.S. Census Bureau’s American Community Survey 5-year estimates for 2011-2015. They include the percent of the population over 25 without a high school diploma, percent of habitable housing that is unoccupied, adult unemployment, the poverty rate, the local median income compared to state’s, change in employment rates, and change in the number of new businesses created. EIG is an advocacy group focused on building a more entrepreneurial U.S. economy. Its founders include big names from the tech world, like Napster co-founder Sean Parker.

That world, from which EIG’s leadership hails, has seen strong economic growth and prosperity over the past few years. Fast-growing western communities and tech hubs dominate the report’s list of the most prosperous cities in the country, while older, industrial cities and rural towns tend to be on the lower end of the spectrum. That discrepancy translates to growing resentment toward regions that are benefiting from the knowledge economy by those left behind by it.

Of the five tiers of economic prosperity included in the study, distressed zip codes were the only group that saw the number of jobs and new business establishments decline between 2011-2015. On the other hand, 88 percent of prosperous zip codes experienced job growth and 85 percent saw rising numbers of new businesses.

“Simply put, residents of prosperous communities are surrounded
by a level of economic vibrancy that would be unrecognizable to the vast majority of Americans elsewhere,” the report says.

This economic inequality is driving a populist movement among people who are left behind by the rapid changes in the U.S. economy and EIG contends it tipped the scales in the 2016 election in President Donald Trump’s favor. The rift between the nation’s haves and have-nots has led some, like investor and political rabble-rouser Nick Hanauer, to predict massive destabilization of our democracy.

The real threat to our republic is an alarming breakdown in social cohesion, and the cause of this breakdown is obvious: radical, rising economic inequality, and the anger and anxiety it engenders.

“The real threat to our republic is an alarming breakdown in social cohesion, and the cause of this breakdown is obvious: radical, rising economic inequality, and the anger and anxiety it engenders,” Hanauer wrote in an essay titled, To My Fellow Plutocrats: You Can Cure Trumpism. “The truth is that over the span of decades, American lawmakers (at the behest of economic elites like us!) have enacted policies that have depressed wages, stoked economic insecurity and exacerbated cultural angst and social dislocation. At the same time, a tiny minority of mostly urban elite (again, us!) have benefitted obscenely from our growing economic, political and legal power.”

Many see the tech industry as the problem but there are also those who believe it could be part of the solution. As the world watches to see which city Amazon will select for its second headquarters, many are hoping the Seattle-based tech giant will bring those 50,000 jobs to a struggling community like Pittsburgh or Detroit. Amazon has the opportunity to establish a new model for big tech companies to inject the prosperity that has been siloed in a handful of urban regions into a community that sorely needs it.

But narrowing the gap between the country’s struggling and prosperous regions will require more than one decision by one company, no matter how monumental. EIG is calling for collaboration between the public and private sectors to create an environment where jobs, innovation, and wealth are shared by communities across the country.

It’s a worthy goal, as the economic inequity outlined in the report affects the health, life expectancy, and political behavior of communities that have never truly come out of the recession. People in distressed counties die nearly five years sooner than those in prosperous regions, according to the study. Minorities are disproportionately affected, representing more than half the population in distressed communities.

“It is fair to wonder whether a recovery that excludes tens of millions of Americans and thousands of communities deserves to be called a recovery at all,” the report says.