Over the course of her abusive marriage, a mom from the Midwest developed a life-saving idea that she couldn’t share with anyone. It was a ritual focusing on the love in her life and it helped her deal with — and eventually work through — her violent circumstances. She thought it could help others but didn’t think she’d ever share what she’d learned because it was so deeply personal.

That is, until she discovered “SINCERELY, X” a new audio series that allows people to share their ideas and stories anonymously, in the style of a TED Talk.

The series is premiering on Audible Channels, a product of Amazon-owned Audible. Members of Audible and Amazon Prime will be able to listen to the first three episodes starting Wednesday. They include stories from the midwestern mom, a doctor who feels responsible for her patient’s death, and a former hedge fund manager seeking redemption for lying to investors.

The show is hosted by June Cohen, an 11-year veteran of TED Media. Cohen is also one of the executive producers on “SINCERELY, X.”

Storytellers share their ideas with Cohen while the rest of the Audible production team works from behind a curtain. The guests’ voices are disguised and Audible uses code names, internally, to protect their anonymity. 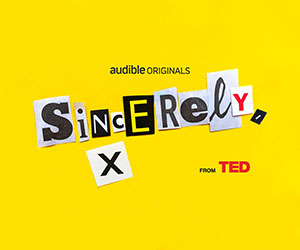 “The kinds of ideas that are told anonymously are the ones that people don’t want to be known for or they can’t be publicly associated,” said Cohen. “I think of these as ideas in hiding. Ideas that can never be told under a spotlight but that deserve to be heard.”

Cohen and her colleagues at TED hatched the idea before partnering with Audible to make it a reality.

The 10-episode first series of “SINCERELY, X” will stream exclusively on Audible. Ultimately the episodes will be available on other platforms, Cohen says.

Cohen is excited about the show’s potential to join what she calls a “Renaissance in audio,” spawned by the popularity of podcasts like “Serial” and “Startup.” She thinks it’s the perfect time for a show like “SINCERELY, X” which relies on the audio format to protect storytellers’ anonymity.

“The thing that fascinates me about this, too, is why they want to tell the story and share the idea at all, if they weren’t going to be associated with it or if they didn’t get credit for it,” she said. “I actually felt really moved by the generosity of the speakers who participated. They don’t get the moment on stage, they’re not going to have their inbox fill up with love letters and opportunities the day that their talk goes live. What they get out of it, really, is the satisfaction of knowing that they’ve helped people.”