Post updated below with correct information about the new audio features.

Amazon is releasing the first major software update for its Cloud Cam today, addressing some of the biggest user complaints about its new indoor security camera.

The app update will start rolling out today via the Cloud Cam app for iPhone and Android. It will let users disable audio recording from the camera; turn the night vision LEDs on and off via the app; and flip the orientation of the Cloud Cam live view if it’s upside down, when installed on a ceiling, for example.

Those changes address some of the most obvious challenges encountered by early Cloud Cam users, as documented in the customer reviews for the device on Amazon.com, where the Cloud Cam is currently rated at 2.9 out of 5 stars. One customer, for example, uploaded a picture to show how the initial inability to turn off the night vision LEDs manually prevented him from recording through a window at night. 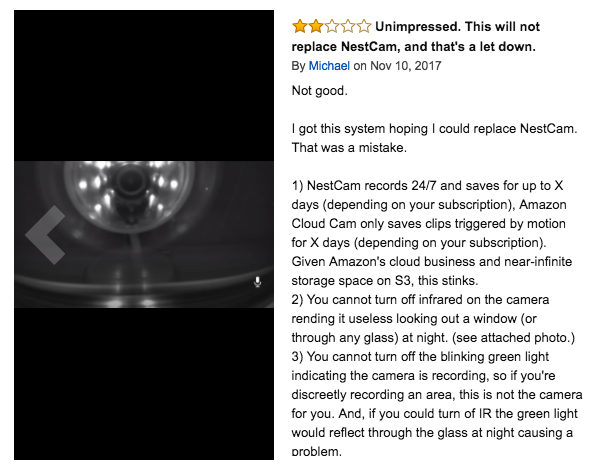 With the update, those LEDs can be turned off manually through the Cloud Cam app, Amazon says.

The ability to flip the orientation is also significant. I’ve been testing the Cloud Cam at home, and was initially surprised that the orientation of the video didn’t change when I positioned the camera with the base attached to the ceiling, technically “upside down.” Amazon says that will change with the update, as well.

Update: Amazon corrected the information that it initially provided about the new features. This update lets users silence the audio in the app while watching the live video stream or recorded clips. The company says the ability to disable audio while recording is coming soon.

The $120 Cloud Cam competes with a variety of security cameras on the market, including Arlo and Google’s Nest Cam. Amazon released the device in conjunction with a service called Amazon Key, which allows the company to unlock the front door to let delivery drivers in, but Cloud Cam also works on its own as a standard security camera. Cloud Cam can be used with subscription plans for extended storage and other extra features, ranging from $7 to $20 a month, or a free plan offering 24 hours of cloud storage.