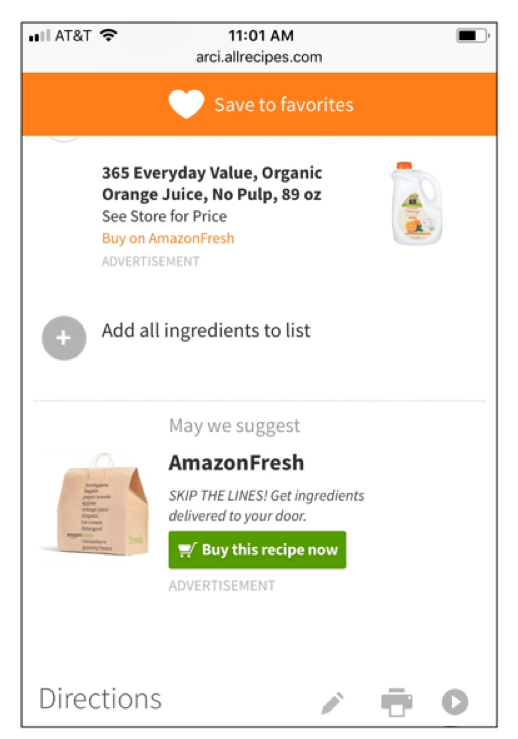 Allrecipes is teaming up with Amazon to help cooks get their groceries delivered.

The online recipe giant today announced a new integration with Amazon’s grocery delivery arm AmazonFresh, making it easier for customers to get ingredients shipped to their doorstep. It’s the latest example of Amazon’s growing interest in selling grocery items as the tech giant tries to make its way into your kitchen.

Allrecipes users will now see an AmazonFresh widget within recipe pages, alongside other grocery store options like Target and Walmart. Users can add all required ingredients for a given recipe to an AmazonFresh shopping cart; the purchase is completed on Amazon’s website, where users can tweak the recommended food brands provided by Allrecipes. The option is available to people living in regions where AmazonFresh delivers.

Allrecipes said this is the first direct API integration with AmazonFresh, which costs $15 a month on top of a $100 per year Amazon Prime membership. The integration will start with the top recipes and later expand to all possible recipes. 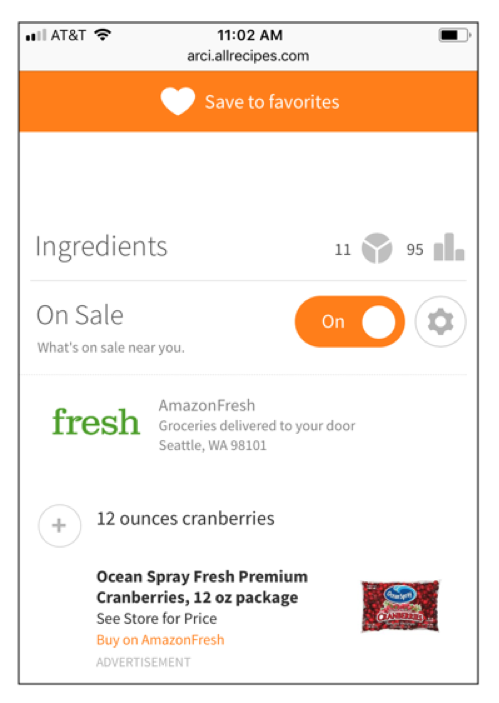 One of the other grocery options on the recipe pages includes Whole Foods — acquired by Amazon for $13.7 billion in August —  though the widget link directs to this page.

In 2015, Allrecipes announced a similar partnership with Instacart, though now Instacart doesn’t appear to be on the Allrecipes site.

This isn’t the first time Seattle-based Allrecipes has worked with Amazon. Last year, it released the first cooking skill for Alexa, the voice-controlled assistant that powers Amazon devices; in June Amazon released the Dash Wand with Alexa with an Allrecipes skill available at launch; that same month, Allrecipes launched a new skill designed for the touch-screen Echo Show.

Allrecipes, founded in 1997, has 80 million users and attracts 1.5 billion annual visits. It was acquired by magazine publisher Meredith Corp. in 2012 for $175 million.

AmazonFresh, meanwhile, has been around for a decade. Amazon recently announced that it is shutting down AmazonFresh in neighborhoods across nine states; Recode reported that Amazon blamed USPS for unreliable deliveries.

This past summer, Amazon began delivering its own meal-kits, taking on Blue Apron with its own version of pre-packaged ready-to-cook dinners.