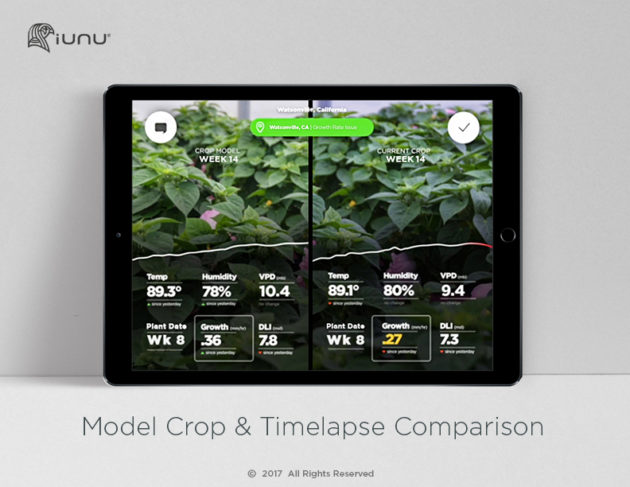 LUNA includes software that run on computers and mobile devices, allowing greenhouse operators to access their analytics remotely, giving them more control over the production of food crops and other plants.

“You’re giving control back to the greenhouses and the greenhouse growers, as opposed to the people they supply to right now,” said Adam Greenberg, the CEO of iUNU, a 25-person startup based in Seattle’s Pioneer Square neighborhood.

He explained that greater predictability in the greenhouse — such as a forecasting the best time to harvest — will let growers adjust their production to meet demand for tomatoes or lettuce, for example.

And yes, also for marijuana, in states where growing and consuming pot is legal.

Whether it’s cannabis or produce or flowers, roses, even cactuses, we’re going to be able to create operational efficiences.

“Whether it’s cannabis or produce or flowers, roses, even cactuses, we’re going to be able to create operational efficiences,” Greenberg said via phone Monday evening.

The field is growing. One research firm says the smart greenhouse market will approximately double, to more than $1.3 billion, by 2022.

LUNA isn’t yet an interactive AI agent on the level of Siri or Alexa, but she’s headed in that direction. The company refers to LUNA as a “she” — saying she “begins to learn, and remember, the moment her cameras and sensors are first installed” in a greenhouse, “giving growers historical records of every detail of every plant in the system, as well as live information.”

“She was born in Pioneer Square, Seattle, and grew up in California and Washington,” Greenberg said, referring to the places where LUNA was developed and piloted, in Seattle, Silicon Valley and Washington state’s Skagit Valley.

Initialized Capital’s Ohanian, the Reddit co-founder, said in a statement, “This solution turns greenhouses into data driven manufacturing plants. It is both a seriously practical and crucial commercial application of AI to a fundamental industry.”

iUNU got its start developing high-tech, energy efficient plasma grow lights for use in greenhouses. It began to work on Luna by building the artificial intelligence system into those lights, before realizing that customers wanted the AI on its own. The company says it spent three years developing and testing the Luna system in large-scale commercial greenhouses.

The company will offer LUNA as a “system as a service,” installing and maintaining the system on behalf of the customer. Greenberg declined to provide specifics on pricing, saying it depends on a variety of factors, including the size of the greenhouse.

Greenberg, 27, the son of a botanist, attended the University of Washington and was co-founder of a clean water startup called Pure Blue Technologies, which won the UW Business Plan competition in 2013. He grew up in San Francisco and worked at Amazon from 2011 to 2013.