What if you could have quality primary care that treats you when you need it and helps you stay healthy — without ever stepping foot in a doctor’s office?

It sounds a bit far-fetched to some. But to 98point6 co-founder and CEO Robbie Cape that system is just around the corner — and the company’s investors seem convinced he’s right.

98point6 today is announcing that it has raised $19.5 million in fresh capital, bringing total funding in the two-year-old startup to $35 million.

The money will be used to create a primary care system that’s entirely virtual, a system that aims to bring down healthcare costs while increasing access.

“We are building a virtual clinic that our patients will be able to interact with through their mobile phones and through a web browser,” Cape told GeekWire. “We believe we can deliver the highest quality of care at the highest level of access at the lowest price.”

Other companies are taking a crack at the market as well, including New York-based Teladoc which on Monday announced that former aQuantive and Pandora CEO Brian McAndrews had joined the company’s board of directors.

We believe we can deliver the highest quality of care at the highest level of access at the lowest price.

Teladoc, which claims to be “forging a new healthcare experience with an innovative portfolio of virtual care delivery solutions,” is publicly traded on the New York Stock Exchange with a market value of $1.9 billion. The 15-year-old company went public two years ago, and now boasts more than 20 million members and over 3,100 board-certified and state licensed physicians in the network. It posted revenue of $44.6 million in the second quarter, up 68 percent over the same period last year. And the stock has climbed 73 percent in the past year.

Cape — who sold his previous company, the family scheduling app Cozi, to Time Inc. in 2014 and spent 12 years at Microsoft —thinks he can disrupt more established players like Teladoc.

He founded the company alongside Gordon Cohen, a professor at Arizona State University and long-time medical industry veteran, who is listed as a co-founder on LinkedIn.

Cape isn’t the only tech name at the company: Its chief product officer is Rob Schwietzer, who previously led the Amazon Prime program and has held executive positions at Groupon and MedBridge. 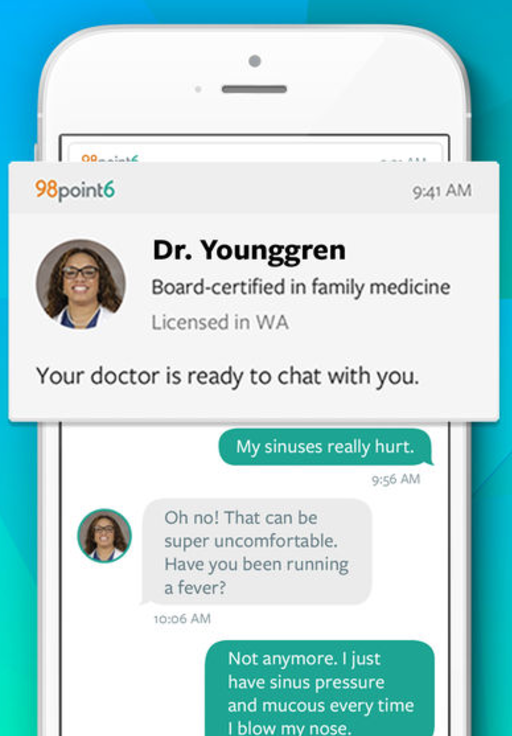 Cape said the 98point6 method is starkly different from services like telemedicine and other health tech tools because it’s focused on what he calls “continuity care”: tracking and working with patients continuously, not just when they have a health problem.

“We want to build a deep, deep relationship with the 98point6 patients and engage with them even when they don’t have a health emergency,” he said. “Think of 98point6 as the doctor that you’re going to have in your pocket that can help you decide what to do.”

At the moment, anyone over the age of 18 in Washington state can use the service for free. Mobile applications are available on iOS and Android.

And, perhaps most interestingly, no health insurance is needed to interact with the 98point6 board-certified physicians.

The company touts the service as a way for those with busy work schedules, lack of funds or who live miles from physicians to receive on-demand medical advice.

Cape said the company will expand to other locations and also pediatrics later on and may charge users a monthly membership fee once the service is fully launched, although the details on go-to-market strategy haven’t been fully hashed out.

Here’s how the service works: 98point6 users have constant access to a primary care doctor through the company’s app and web portal. If they have any medical questions or aren’t feeling well, they can simply hop into the app to talk to a 98point6 doctor, who can give them medical advice, diagnose health issues and prescribe treatments.

The company says the service can be used for many non-urgent health issues, everything from nasal congestion and eye infections to hypertension and sleep disorders.

No appointments are needed, and to get started patients must simply download and login to the app.

For more serious cases, 98point6 doctors — who are employed directly by the company — can also give patients referrals to see a specialist or instruct them to go to an emergency room.

The idea is to bring down medical costs by catching health issues early and eliminating visits to physical care locations for minor health problems, like an ear infection or the flu.

Cape said the company’s goal is to help patients live a normal, healthy life — that’s also the inspiration behind the startup’s name.

“We are just part of them being normal and them being healthy, and 98.6 [degrees] is considered — in the U.S. — a normal temperature,” he said.

98point6 now employs 70 at its headquarters in Seattle.