Mike Harms hopes you can learn from his two decades of disastrous fantasy football performance.

It’s a fun look that recaps Harms’ past 24 years in the same fantasy football league. He’s managed to finish in first place just once — and that inspired him to dig deep into the fantasy football world and share his lessons with the 60 million other players in North America.

Technology is a focus in Harms’ book. He noted how the internet completely changed fantasy sports, automating tedious processes and leveling the playing field with real-time access to stats. 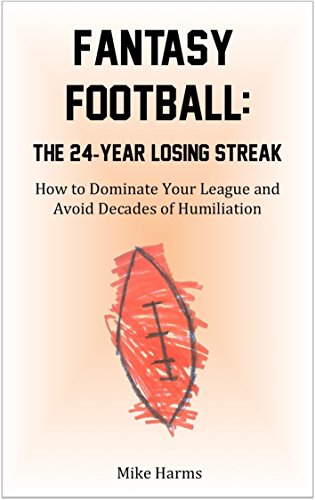 “Nonetheless, people like me still find ways to lose consistently,” Harms told GeekWire. “The book looks at how emotions can trump technology for worse — and better.”

The book also analyzes mountains of data that Harms collected over the past two decades to help him draw conclusions about how to win your league. We asked him for three tips that can help fantasy players finish atop their league standings.

Harms: “If there’s a single factor that separates my one championship season from the 23 losing seasons it’s this: Patience over panic.

I was turning over the roster so rapidly during the bad years that I allowed insufficient time for players to overcome slow starts. There’s a chapter in the book called “The Curious Case of Randall Cobb” that illustrates this problem. In 2016, I cut Randall Cobb in Week 4. He was averaging 3.6 points per game. Over his next nine starts, Cobb’s production shot up by 137 percent. He ended up leading two of my opponents into the playoffs.”

Don’t get personally attached to your players

Harms: “I have a man crush on Darren Sproles. In 2011 I stole Sproles in the 10th round of my league’s fantasy draft. He went on to set the NFL single-season record for all-purpose yardage with 2,696. Sproles was a big reason why I won my league championship in 2011.

That didn’t stop me from drafting Darren Sproles again. And again, the results were equally bad.”

Beware of the “Blanda Blunder”

Harms: “The first-ever ‘loser trophy’ in fantasy football went to a guy named Andrew Mousalimas. In 1963 Mousalimas had the first pick in his league’s draft. He selected a QB, George Blanda. Big mistake. The next team up selected a RB, Jim Brown. That team won the championship while the Mousalimas team finished dead last.

In the course of my research I learned that fantasy players who enjoy sustained success have two things in common: they trust their instincts and they take their team personally.

Blanda was a fine fantasy QB, but equally good QB’s were available later in the draft. By contrast, Brown was in a class all by himself at running back. He won the NFL rushing title that year by gaining 1,863 yards, eclipsing the runner-up’s total by 83 percent. Years later, Mousalimas was famously quoted in an ESPN article: ‘I should have taken Jim Brown.’

For real-time advice on which players to draft or which ones to start versus sit, Matthew Berry’s Fantasy Life app is a great resource for crowd-sourcing your lineup.

The internet put so much fantasy data at people’s fingertips that it leveled the playing field, at least in theory. In the course of my research I learned that fantasy players who enjoy sustained success have two things in common: they trust their instincts and they take their team personally.

The guy who won my league the past two years is nicknamed the Ice Man. The nickname is not a coincidence. We both started last season with lousy records. I started panicking and made 10 roster changes during the early weeks. Ice Man made two changes during that same period. He trusted his instincts and stuck with his players. It paid off for him.

The one area where your gut instinct can lead you wrong is when you’re making decisions about whether to start or sit an injured player. Football players are tough so we expect them to play through injury. Also, there’s a desire to see our favorite players out there on the field. So, our gut might be telling us to start a player simply because we want him to be healthy, regardless of his true condition. That’s why the Inside Injuries app is a go-to resource for me this season, so I can make data-driven injury decisions instead of emotional ones.

Finally, successful players take their team personally. They sweat the details, like understanding every nuance of their league’s scoring system. My league’s scoring rules haven’t changed in two decades but until recently I couldn’t tell you how many points we award for rushing yards versus passing yards. Or, how many points a 45-yard field goal is worth.

That’s all changing for me this year. I’m still going to have fun and enjoy the camaraderie of competing against my best friends. But I’m taking my fantasy team deadly serious. And oh: our league awards 1 point for every 10 yards rushing or receiving, and 4 points for a 45-yard field goal.”