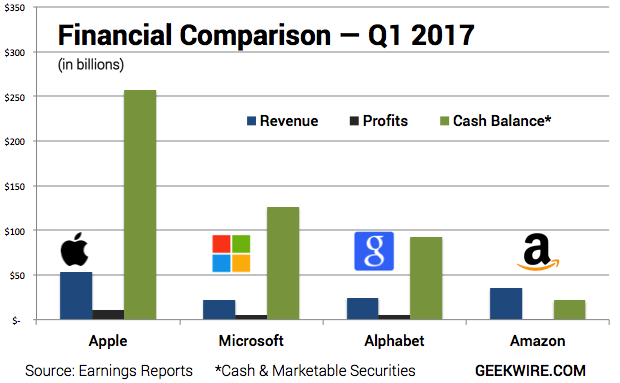 The growing cash pile shows just how much of a financial juggernaut Apple remains, even as sales of its flagship iPhones and iPads slipped in the most recent quarter.

GeekWire’s chart above provides a snapshot of revenues, profits and cash balances among those four companies as of the end of the first calendar quarter.

In the cash rankings, Microsoft is second among those four companies, with $126 billion in cash and equivalents. Alphabet, the Google parent, has $92 billion in cash, and Amazon comes in at $22 billion among the four.

Facebook, which reports first-quarter earnings Wednesday afternoon, had $29.45 billion in cash, equivalents and marketable securities in its year-end report.

Apple extended its plan to return capital to shareholders by an extra $50 billion as part of its earnings announcement, through dividends and share buybacks. However, the company faces pressure from some shareholders to put the cash to use for something more aggressive, such as blockbuster acquisitions to fuel the future of its business.

Along those lines, the Wall Street Journal is having fun imagining the possibilities for all that money, with this interactive graphic showing how many companies someone could buy outright with Apple’s cash.