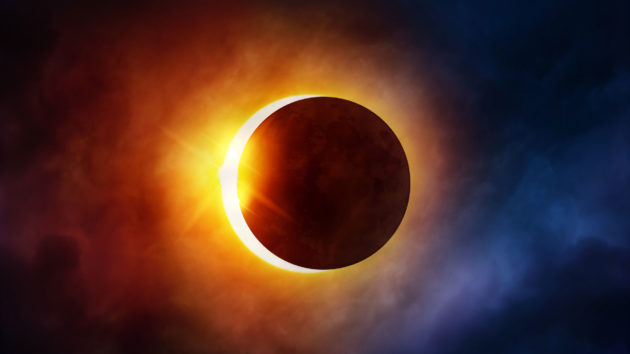 When the daytime sky darkens on Aug. 21, it’ll be the first time in more than 38 years that a total solar eclipse can be seen from the mainland U.S.  A lot has changed since Feb. 26, 1979, when the track of totality stretched across Washington, Oregon, Idaho and Montana. But the interest in the science and spectacle surrounding an eclipse is, if anything, more intense.

The team at EmPower Solar, began thinking about how things have changed since the last eclipse and created photo sliders to give a side-by-side comparison. Click the middle of the photo and then drag the slider to either side to see how society has changed since the 1970s.

In the 1970s, the United States was suffering through an international oil crisis, and gas prices were skyrocketing — bad news for the gas-guzzling cars lining up at service stations.

In 2017, most Americans are still driving cars fueled by petroleum, but now drivers have more options, including Tesla’s all-electric cars. Tesla CEO Elon Musk kicked off deliveries of the Model 3 just last week in an effort to make alternative-fuel vehicles more affordable.

The 1970s brought several milestones in space exploration, including the Apollo-Soyuz mission of 1975, the Viking Mars landings of 1976 and the launch of the robotic Voyager missions in 1977. On March 5, 1979, just days after the eclipse, Voyager 1 flew by Jupiter and discovered active volcanoes on the moon Io.

2017 still has months to go, but the year has already racked up some pretty impressive accomplishments. NASA astronaut Peggy Whitson broke the record for the most cumulative time spent in space, SpaceX reused a recycled Falcon 9 rocket and Dragon capsule for the first time, and the Cassini spacecraft became the first spacecraft to dive between Saturn and its rings.

One thing that has not gone away over the decades is box-office interest in science fiction. Nearly 40 years later, classic film franchises are being given new life on the big screen. Take the “Alien” series, for example. The original movie, directed by Ridley Scott, came out in 1979, setting the stages for decades’ worth of sequels, prequels and crossovers. Ridley Scott came out with latest “Alien” entrant, titled “Alien: Covenant,” this May.

The “Alien” series isn’t the only one making a comeback in 2017. The original Star Wars movie made its debuted in 1977, and “Star Wars Episode VIII: The Last Jedi” is expected to hit theaters this December. And last month, “War for the Planet of the Apes” became the latest reboot of a film series going all the way back to 1968.

4. The Path of Totality

Even the path of totality on Aug. 21 will have some overlap with the 1979 total solar eclipse. The path crosses Oregon and Idaho once again in 2017. But instead of merely grazing the Pacific Northwest and heading up into Canada, this month’s eclipse will sweep the entire width of the U.S. and exit through South Carolina.

The 2017 eclipse will probably be the most viewed solar eclipse to date, and that’s not just because of geography. Eclipse2017.org reports that it was raining in many spots along the path of totality in 1979 eclipse, so not everyone who was there saw the blacked-out sun in all its dark glory.

Fortunately for this year’s all-American eclipse, we have technology on our side. Even if your neck of the woods is clouded out, several live streams of the event will be available, including a feed from the Seattle space sisters’ Loki Lego Launcher.