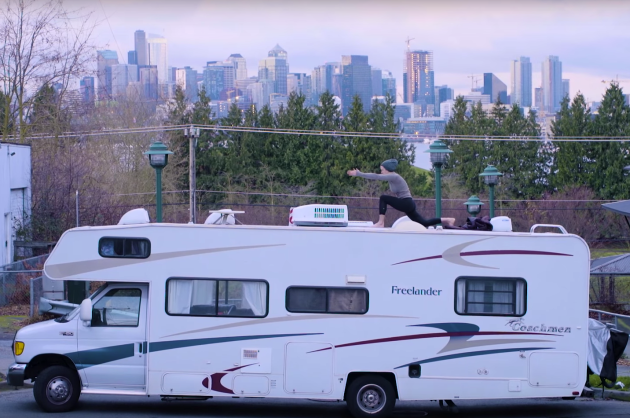 Seattle’s affordability crisis, largely propelled by an influx of skilled tech workers, is causing many residents of the traditionally blue-collar city to seek out alternative housing.

Zillow, the real estate startup whose growth is part of Seattle’s tech-driven boom, recently profiled three individuals with creative solutions to rising rents. Ellen Sims, a nonprofit executive and massage therapist, is featured in the profile and the accompanying video below.

Sims’ story is part of Zillow’s new Housing Roadmap to 2016, a series focused on housing issues in America. Living in an RV brings simplicity and adventure to her life.

“For living alone, I pay about a third to a fourth of what other people are paying, so it’s affording me the ability to pay off debt and save money at the same time so that I can hopefully get to purchase some land,” Sims says in the video.

She’s found a solution to the city’s rental woes that works for her, but Sims is hardly representative of all Seattleites living in their vehicles. As Zillow notes, rising rents over the past two years have caused homelessness to skyrocket in Seattle. A recent night count found a 19 percent increase in homelessness over last year.

“I believe the increases in rent that everyone’s been talking about recently have been an important factor in the numbers going up,” Director of Housing at Downtown Emergency Service Center told The Seattle Times.

At a community meeting last month, Seattle police estimated between 175-200 people in the city live in their vehicles, according to KING5. That estimation was part of a broader discussion on homelessness. Around the same time, Seattle Mayor Ed Murray issued a state of emergency to fight the problem. The emergency order included funds to create two safe lots for homeless people who live in RVs or cars in Seattle.

The non-profit that Sims runs provides free healthcare to the homeless and low-income populations currently plagued by Seattle’s affordability crisis. Living in an RV has given her the opportunity to escape high rents and focus on the future. But she recognizes the challenges homeless populations driven out of the rental market face.

“The number of people who are now living in cars, motor homes, and tents has increased,” she says in the video. “So have the negative responses from people.”