Raúl Raja Martinez is all about simplicity.

Everything, from his conforming workstations to modest mobile device, is intended to help him eliminate the extraneous and focus on the essential.

He applies that philosophy in his role as CTO for 47 Degrees, a Seattle-based design and development consultancy firm.

“What that means, beyond a meaningless corporate title, is that I spend a lot of time deep into programming, especially around Functional Programming technologies, as well as helping others on my team with any issue related to 47 Degrees’ projects, whether it’s Open Source, internal, or client projects,” he said.

Martinez is also a member of the Scala Advisory Board. In that capacity, he connects with key members of the community and helps makes decisions about the future of the language.

We caught up with Martinez for this installment of Working Geek, a regular GeekWire feature. Continue reading for his answers to our questionnaire.

Current Location: “I’m currently splitting my time between Seattle and Cadiz, Spain. Due to the nature of our distributed and global business, I spend a significant portion of the year traveling around the world to conferences and client meetings.”

Computer types: “The majority of the 47 Degrees team use Macs. I do too, though I run Linux on my Mac where I spend most of my time on Emacs and Scala projects.”

Mobile devices: “Historically, I’ve been a fan of Nexus Android devices, as well as iPhones. Lately, however, I’ve decided to only use small, simple Android devices such as the BQ Aquarius A4.5. The main reason for the switch is that screen sizes have become ridiculously large, and battery life is a real concern for most people. I also want a small device with lower specs to ensure all of our projects run correctly — not only in high-end devices, which we have plenty to test with but also with mid-range hardware that provide a more realistic picture of what’s out there.”

Favorite apps, cloud services, and software tools: “Emacs, IntelliJ, AWS, Chrome, and Firefox are what I spend most of my time using. I’m actively trying to reduce app and mobile usage, as well as finding the minimal amount of tools that will help me get the most work done. I think in our day, people are heavily abusing technology and becoming dependent on multiple tools, increasing the complexity of their daily routine when it’s unnecessary. I find simplicity to be paramount to a happy social/family/work life balance.”

Describe your workspace. Why does it work for you? “I have three different workspaces. One at the office and two at home. All three of them share the same configuration, so I avoid context switching as much as possible and minimize the time I spend setting up before starting any task.

All of my workstations include a U.S. keyboard layout and 34-inch curved displays. I exclusively use my laptop to connect to the different displays so I can continue where I left off.” 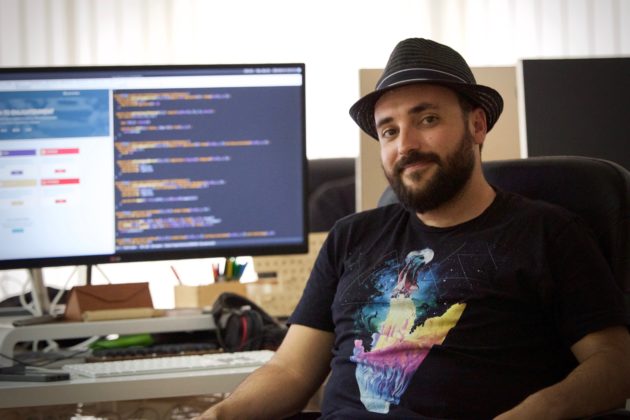 Your best advice for managing everyday work and life? “Do what you enjoy and leave enough time for family, friends, and fun. An unbalanced work life is usually what makes a difference in terms of life happiness for most working individuals in our age. Become more productive by sticking to what’s essential and doing less of what’s not.”

Your preferred social network? How do you use it for business/work? “I spend most of my time on Twitter @raulraja; it’s where the Scala and most other programming communities interact the most, and WhatsApp for direct communication with friends and family. Other social networks/systems I frequently use are Slack and Gitter for work, and OS fun and Facebook to keep in touch with some of my old friends, although I’m not particularly a fan of its bloated interface.”

Current number of unanswered emails in your inbox? “I’m usually a couple of days behind in my inbox but can follow through and catch up in about two to three hours every other day. I’m a busy person, but I feel I set expectations accordingly with individuals that want something from me and provide ways for them to reach out if it’s something urgent. I think email is abused and sometimes people don’t understand it’s not for immediate communication.”

Number of appointments/meetings on your calendar this week? “Two. I tend to delegate and try to not be in all meetings. Most folks on my team are responsible enough to involve me only when I’m needed. I’m of the opinion that the fewer important tasks I deal with, the most I’m going to make out of them, so I choose carefully what we as a company get involved with technology-wise to make sure I increase the impact of our meetings, projects, and overall contributions.”

Everyday work uniform? “We have no dress code at 47 Degrees. Come as you are is our only policy, as long as it’s not offensive to others in the office. We value diversity, and that applies to the way our team dresses, too.”

How do you make time for family? “We promote a good work/life balance and rarely do overtime unless strictly necessary for upcoming deadlines.

That’s enough for an eight-hour workday. I spend most of my evenings with my wife and son playing in our backyard or going to family-friendly places. I also get a lot of fun nights out with friends at the conferences I attend, so I can’t complain.

For the most part, other activities include BBQs, which I’m a big fan of, and they always include friends and family.”

Best stress reliever? How do you unplug? “BBQs, family, friends and music. I have a small music studio at home where I record my own stuff and occasionally play with friends. Also video games with my 5-year-old. The HTC Vive VR Headset has been one of the greatest investments of my life, so much fun.

What are you listening to? “I have an eclectic taste in music since, in the past, I’ve been a musician in bands with varying styles. I’d say I mostly listen to Indie Rock and folk, with some electronic thrown in there, but I pretty much like everything. Here is an export of my Eclectic Google Music Thumbs Up.

Daily reads? Favorite sites and newsletters? I usually keep a list of aggregations, including Reddit and important tweets related to the Scala community from Twitter. I’m not necessarily a fan of a particular site, but of its content, and that frequently includes GeekWire articles in a range of topics as well. :)”

Book on your nightstand (or e-reader)? “Essentialism: The Disciplined Pursuit of Less. Haskell Programming from first principles“

Night owl or early riser? What are your sleep patterns? “Night Owl, I’m most productive at night. I usually go to bed around 1 to 2 a.m. and wake up around 8 to 9 a.m.”

Where do you get your best ideas? My best ideas come from talking to people and listening to what their issues are. Most good ideas are a response to people’s bad experiences or pains they’ve faced, whether that’s with products or life in general. The same principle also applies to programming and engineering.”

Whose work style would you want to learn more about or emulate? “I’m a big fan of the ideas proposed in Essentialism: The Disciplined Pursuit of Less by Greg McKeown. It seems to make sense all around and have already impacted the way I manage my time and interact with people.