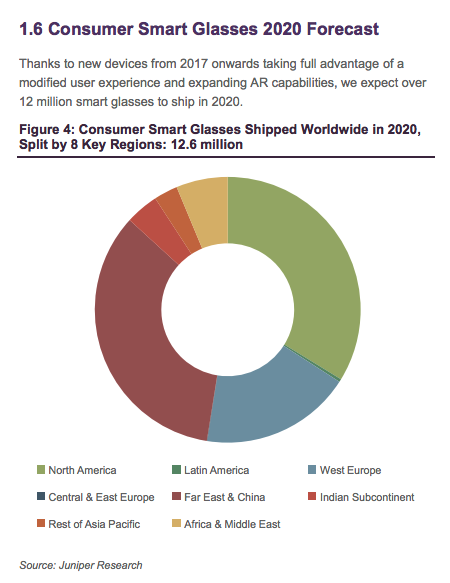 While the initial rollout of Google Glass may have been a disaster, with much of the focus centering on Glassholes and a lack of ongoing interest from higher-ups, Google hasn’t completely abandoned their reality-augmenting headsets. But a different company may be poised to do it right.

A new study by U.K.-based Juniper Research estimates that there will be more than 12 million smart glasses shipments by 2020. But the research firm says Microsoft, not Google, may have the advantage when it comes to cornering the market.

But before we get to why, let’s define what exactly smart glasses are. Juniper calls smart glasses any “head-mounted…devices that provide display and computing capabilities while overlaying, but not replacing, the visual world.”

That would include not only Microsoft’s HoloLens and Google Glass, but also devices like the mysterious Magic Leap. However, the Oculus Rift and HTC Vive aren’t included in the definition.

According to Juniper, the advantage Microsoft has going into the future smart glasses war is that it’s building a product to use at home, while Google has repeatedly advertised Glass as an on-the-go computing device. Microsoft demonstrated its vision for home use on Tuesday with a video showing how NFL fans could use HoloLens to enhance the viewing experience in the future.

“Their use indoors counteracts many of the more problematic elements of smart glasses use,” Juniper’s James Moar said. “The user is never far from a charging point, does not need to look their best (although aesthetics may still be a concern) and is unlikely to be perceived as impinging on others’ privacy.”

Moar also cautions that smart glasses manufacturers shouldn’t try to replace the smartphone. While Google Glass replicates many smartphone features, like weather and messaging alerts, camera functionality and directions, HoloLens is marketed as a device solving new problems, like simulating physical objects in 3D space and building out an array of virtual displays to more easily access information.

“For a consumer who does not need constant hands-free computing, most smart glasses functions can be more easily and cheaply done on a smartphone, which is now a much more common item in many markets,” Moar said.

The idea of an indoor device could also solve the computing problem in augmented reality. Tracking all the data from a set of smart glasses, then altering “on-screen” images will likely be quite the energy- and computing-intensive process. Limiting the range of a smart device to within the same WiFi network as your more powerful desktop computers may reduce the need for expensive CPUs built into the head-mounted devices.

However, it may not be fair to count Google out of the game yet. Project Aura, the reanimation of Google Glass’s consumer-oriented skeleton, may shift the focus of Google’s augmented reality efforts to something more domestic. And the Glass for Work program repositions Google Glass as a heads-up display for the workplace.

But with Microsoft releasing developer units of the HoloLens sometime this month, and Magic Leap focusing wholly on its “Mixed Reality Lightfield” while sitting on a $4.5 billion valuation, Google may be getting left behind.