You may soon see small six-wheeled self-driving delivery robots strolling around the streets of Seattle.

Starship Technologies, an Estonia-based company started by Skype co-founders Ahti Heinla and Janus Friis, is meeting with Seattle lawmakers to gain regulatory approval for its 35-pound ground-based robots that deliver everything from parcels to potatoes.

The startup is already testing its robots across 12 countries worldwide and will begin a pilot program in Washington D.C. this month. Within the next four weeks, Starship will choose two additional U.S. cities where the company will deploy 15 to 20 robots that use a combination of GPS and computer vision technology to deliver items to people’s doors autonomously.

Henry Harris-Burland, marketing and communications manager for Starship, told GeekWire that Seattle is “one of our favorite candidates.” He said the company spent time this month getting feedback from random people in the city about its robots and got an “overwhelmingly positive response.”

“We would much prefer to be in a city that embraces technology and innovation like Seattle,” Harris-Burland said. “It’s a natural fit with Seattle.”

If approved in Seattle, Starship would partner with a few companies across three different industries: parcel, grocery, and food.

Starship would help make deliveries on behalf of those companies, whether it’s a few bags of groceries or a package. The robots can carry up to 22 pounds of product and travel at 4 MPH. Thanks to the computer vision technology, they can map neighborhoods to know exactly how to navigate around a city. The robots also use nine cameras and ultrasonic sensors for obstacle detection.

For initial trials, the robots are controlled with the help of humans, but Starship plans to make the devices 99 percent autonomous. 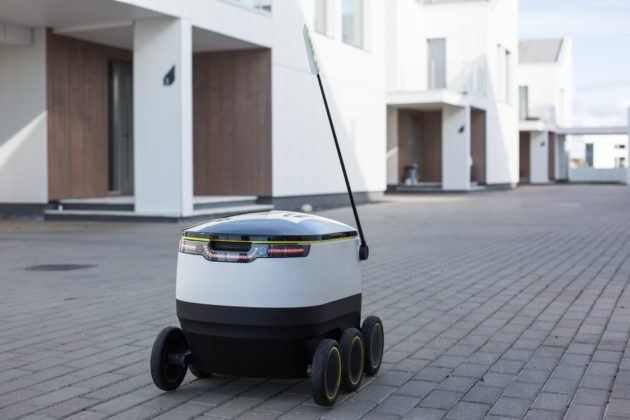 For customers, after making an online purchase with a participating retailer, they can pick Starship as their delivery option. Once the order is ready, Starship notifies the customer on their smartphone. They can call the delivery at a specific time, and the robot will make its way over. After arriving at a destination, customers use a smartphone app to unlock the lid. There’s a two-way radio on the robot in case a customer has issues.

The robots live in warehouses around a city, but Starship is partnering with companies like Mercedes-Benz for “Robovans” that house multiple robots and can move around cities.

Theft is certainly a concern, but Starship said after 8,000 miles of testing to date, it has zero reports of stolen goods. The robots are also equipped with alarms. 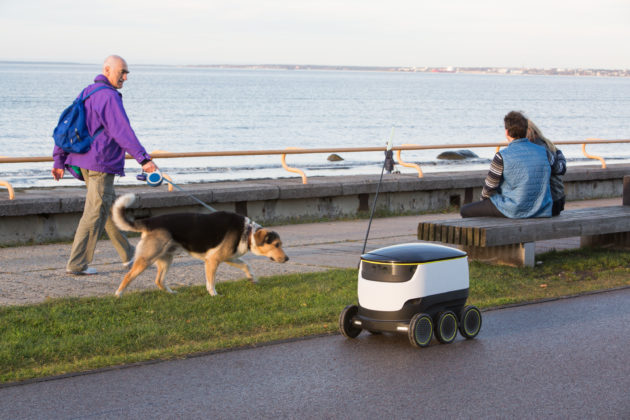 Starship’s pilot model for autonomous robots is similar to how Uber is partnering with the City of Pittsburgh to test its self-driving cars. Harris-Burland said there are special permissions and exemptions that the company needs to have approved, depending on existing laws.

“Sometimes it’s purely agreeing on location, or agreeing on what happens during certain scenarios,” he noted.

Starship’s robots could prove to be more efficient than a traditional human-powered delivery network. The company said the robots (as part of the Robovans) can deliver 400 parcels in one “shift” per day; a normal human “shift” today can do 180 parcels, it noted.

Starship said it is aiming to offer on-demand delivery for around $1 each; it charges partners on a pay-per-delivery model, or a full-service approach.

Ground-based autonomous delivery is an alternative to aerial drone delivery, which Amazon is spearheading, though the Seattle-based tech giant is running into regulatory setbacks, making its drone package delivery ambitions difficult to achieve in the U.S. unless the company can receive specific waivers.

Both Amazon, which is starting to build its own delivery infrastructure, and Starship are using innovative technology to facilitate the “last-mile” of delivery. Asked about Amazon’s drones, Harris-Burland downplayed any competition and called them a “complimenting technology.”

“Aerial drones are very good at delivering things in rural areas; ours cannot do that,” he said. “But when it comes to city centers and residential areas, that is where delivery robots on the ground are much better in a commercial sense than aerial drones.”

Starship employs 65 people — up from 30 this past November — and has raised an undisclosed amount of investment. Heinla and Friis sold Skype to Microsoft for $8.5 billion in 2011.

“Our vision revolves around three zeroes — zero cost, zero waiting time and zero environmental impact,” Heinla said in a statement. “We want to do to local deliveries what Skype did to telecommunications.”