The tumultuous election has put a cloud of uncertainty over the tech industry. But Matt McIlwain is optimistic, especially when it comes to the Seattle region’s prospects as a technology leader.

McIlwain described a “three-layer cake” of the future of tech — event-driven computing, cloud computing, and multisense interface — and said Seattle’s success in these three areas means it is ideally poised to be a global leader in the next wave of innovation.

The first layer of the cake is event-driven computing — essentially systems where one event causes another event to happen, a core component of cloud computing systems.

Say, for example, McIlwain uploaded a picture to an image storage service. That service would recognize that he had uploaded the image, and perhaps run image recognition software and realize it is an image of his mother. “And then the event that it triggers after noticing that is posting a nice thing about my mom on Facebook, with the image,” he said.

Seattle’s recognized power in cloud computing — McIlwain said the city is the world leader on this front — means it will likely also play a large role in the development of event-driven computing.

Seattle has a strong machine learning presence, with teams from Google, Microsoft, the Allen Institute for Artificial Intelligence and the University of Washington, among others, driving innovative research. Machine learning startups are also finding great success in Seattle, such as the Madrona-backed Turi, which sold to Apple for $200 million this summer.

The final change that McIlwain predicted — the icing on the cake, if you will — is how we will interact with applications. We have already moved from interacting with clicks to interacting with touch, and we will soon depart even from that mode, McIlwain said. 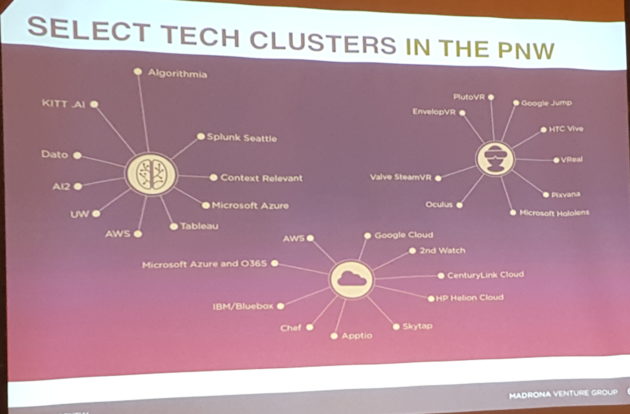 “We’re going to move from touch to multisense — so the idea that I’m using my voice to interface with Alexa, or Cortana, or Siri,” he said. “I’m going to use my eyes to open up an application in the Vive.”

Virtual reality will play a key role in determining how we interact with future applications, and Seattle has emerged as a leader in VR developments. In addition to the Vive, from HTC and Valve, Oculus has an office in the city and Microsoft’s HoloLens is being developed across the lake in Redmond. VR startups, particularly gaming startups, have also found success in Seattle. UW’s CoMotion lab has emphasized VR in recent months, looking to provide more support for VR startups.

McIlwain’s predictions are good news for Seattle and its future as a tech hub — but success will still require innovation and some good old elbow grease.